Last week we shared the side trips we took while we were in Nicaragua, and if you missed that post, you can read it here.  Today, we want to tell you about the volunteer work we did while we were there.  We spent six days in the mountain town of Matagalpa which has a population of around 150,000.  Since it is in the mountains, the weather was very pleasant with highs in the low 80’s.  They were at the end of the rainy season, and the foliage was bright green, and the markets were overflowing with brightly colored fresh vegetables. 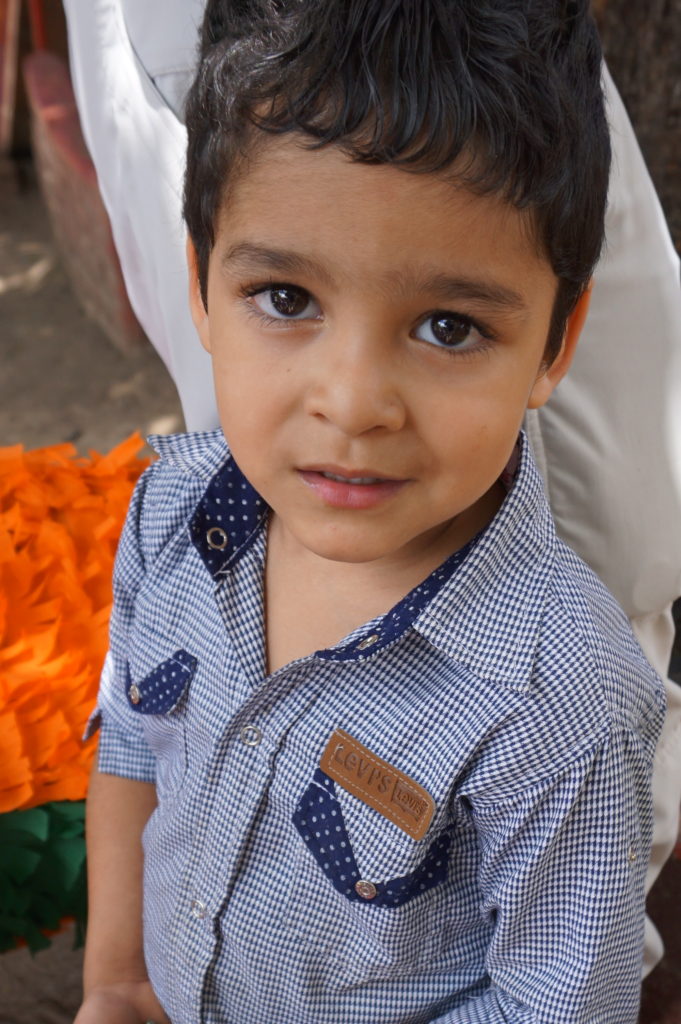 We worked in conjunction with the Sisters of Notre Dame on this project.  A nun name Sister Rebecca arrived in Matagalpa 21 years ago, and at first she didn’t have a clue what she would be doing there.  Let me tell you that this nun, though small in stature, could move mountains.  Shortly after her arrival, a local priest asked her to work with families that had children with disabilities.  He said having a child there with special needs often destroys the family, and he wanted to save his community’s families.  He said the mothers and children were isolated and often shunned by society, and he wanted to help them.  One day Rebecca got lost while walking, and a lady offered her a glass of water.  Coincidentally, that lady was the mother of a child with special needs, and together they decided to find other mothers and bring them all together. 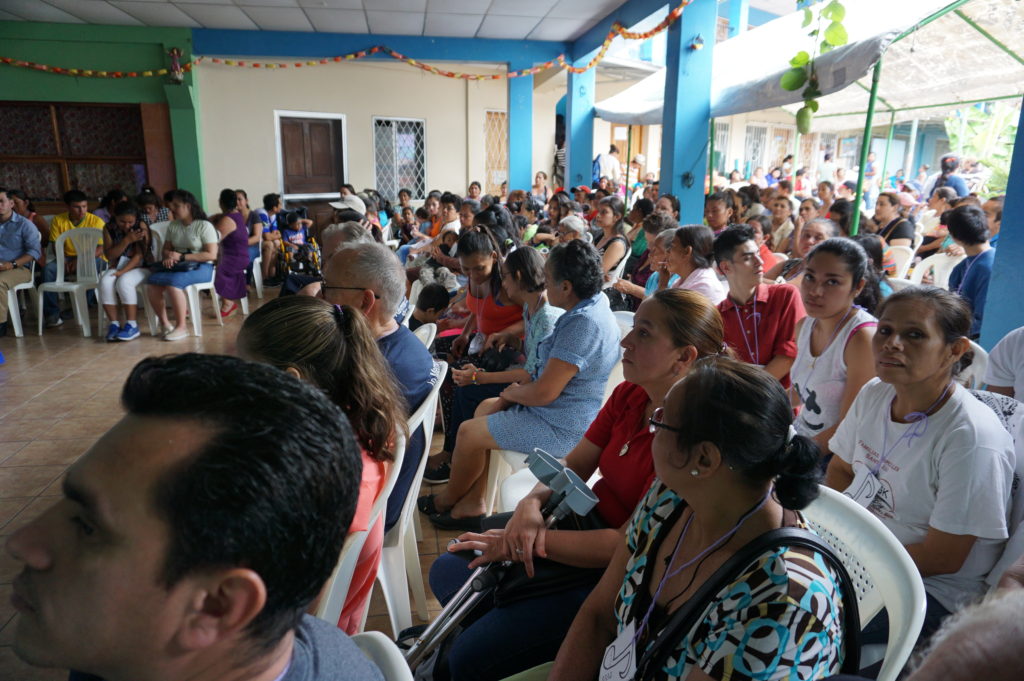 Now, 21 years later, there is an ongoing program that has given the families a base, works with the special needs children, and employs the teens and adults with special needs.  This photo shows the annual parents meeting which took place while we were there.  This network came together because Sister Rebecca got lost. 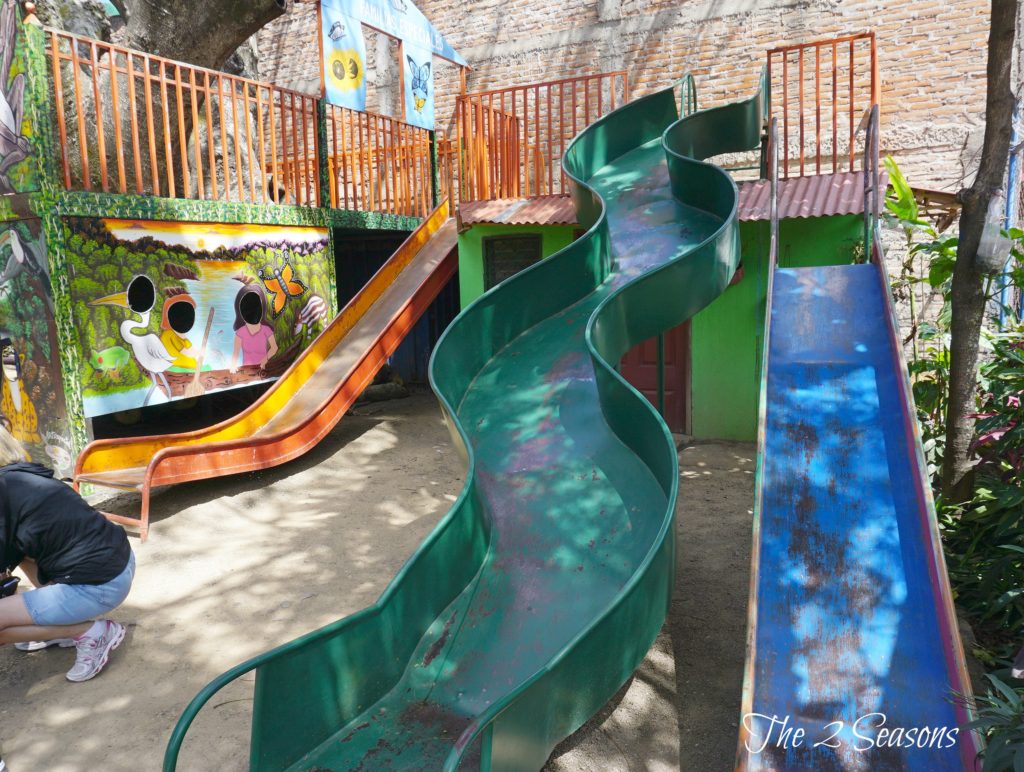 They created a colorful park in a vacant lot after hauling away 50 dumpsters full of trash.  This part of the city used to be known for its drug dealers, but now it is a safe neighborhood.  Every single piece of playground equipment ( it is a huge park, and this is only about five percent of it) was made and/or painted by someone with special needs.  The park is huge, and I didn’t get photos of all of it.  They also use the equipment in physical therapy with the children.  As an aside, the city parks throughout Matagalpa have free wifi to encourage people to come out and use them.  One of the parks has huge colorful play equipment for children, and that was Sister Rebecca’s idea. 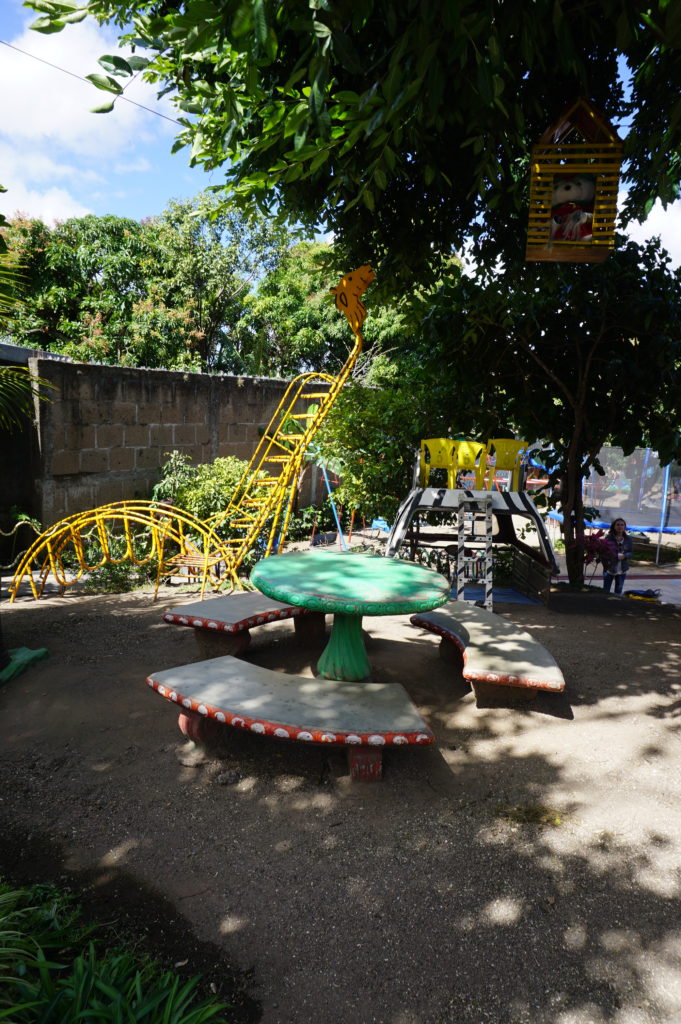 A center/school is located at the back of the park where specialists work with children who have autism, Down’s syndrome, cerebral palsy, etc.  They help make these people into happy contributing members of their families.  Our group bough the materials to replace the roof. 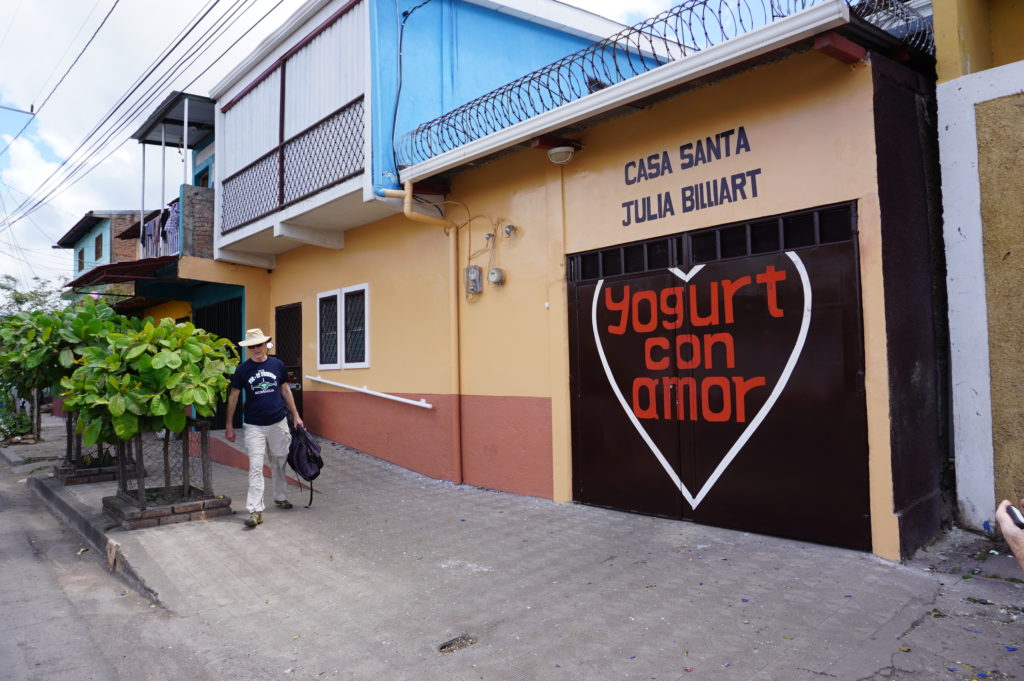 Down the street in one direction is a yogurt and granola factory.  Some of the special needs people work there to create yogurt and granola that they sell in the city to restaurants, hotels, and individuals.  It needed a new paint color because the color you see in this photo shows that it is the same color as the police station.  They said people entered the building thinking they were coming to see the police. 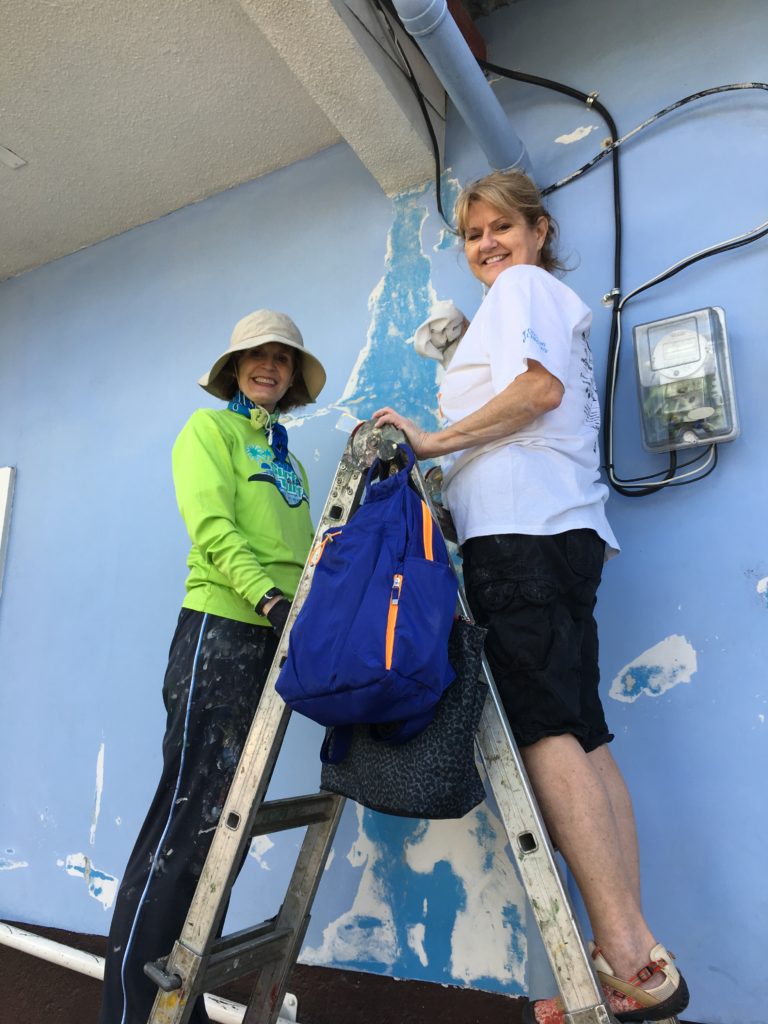 My task for the week, along with my friend Debra Hupman, was to paint the outside of the building blue. 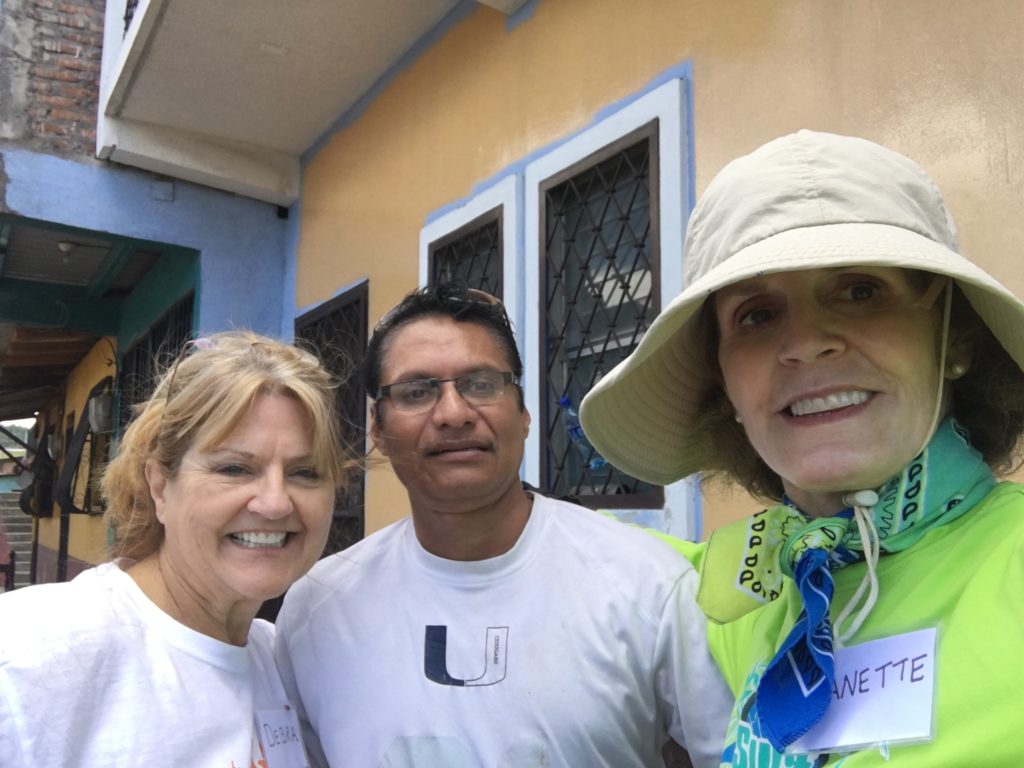 We worked the whole week with a deaf man who oversaw our work, kept us in line (wink, wink), and he also repainted the lettering.  Even though he was deaf and we didn’t know Spanish, we were able to communicate all week long. 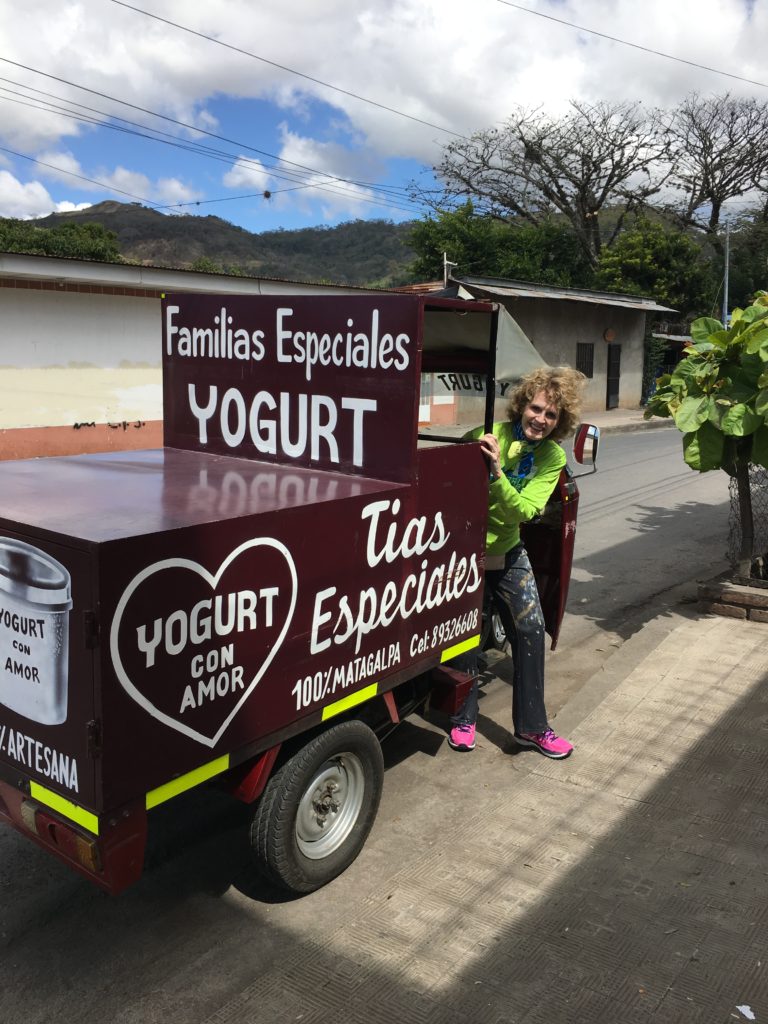 The yogurt center used this cute little vehicle to make its yogurt deliveries all over the city. 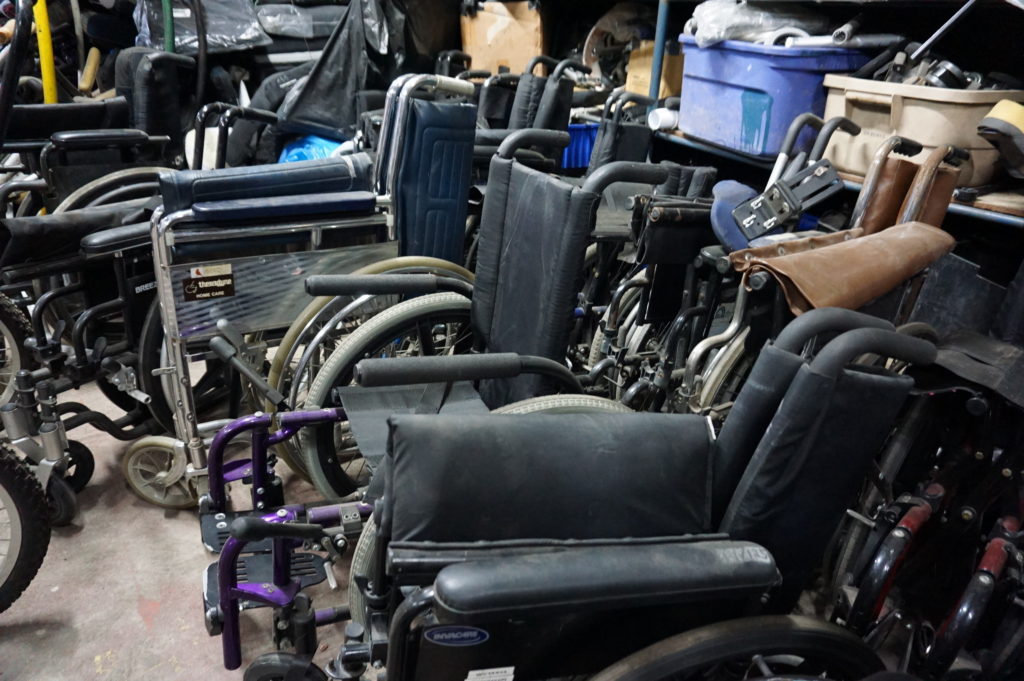 Down the street in another direction was a restaurant that the organization runs, and we ate delicious lunches there everyday.In the back of the restaurant in a facility where they repair broken walkers and wheel chairs. 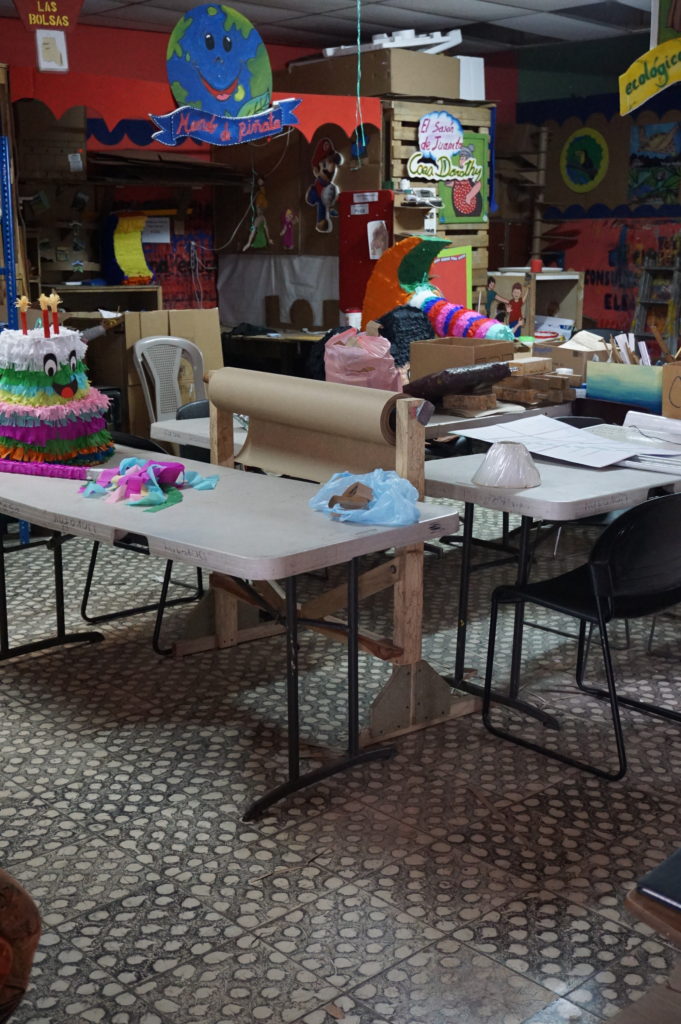 About a mile away in another part of the city is the recycle center that Sr. Rebecca’s group created. 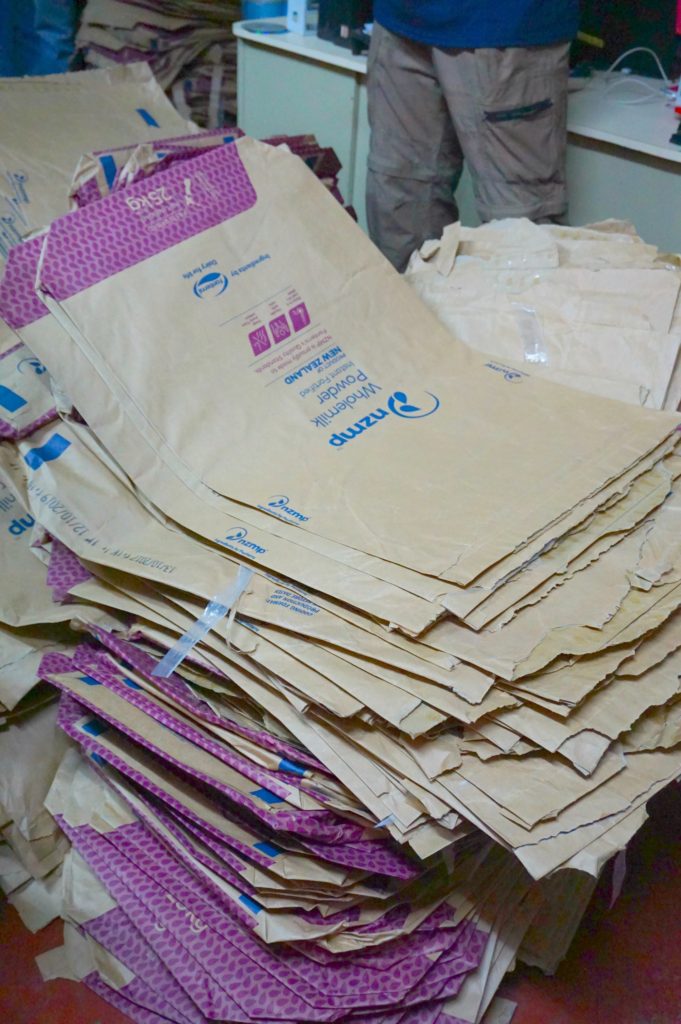 They recycle large paper bags which they turn into small paper bags that they sell. 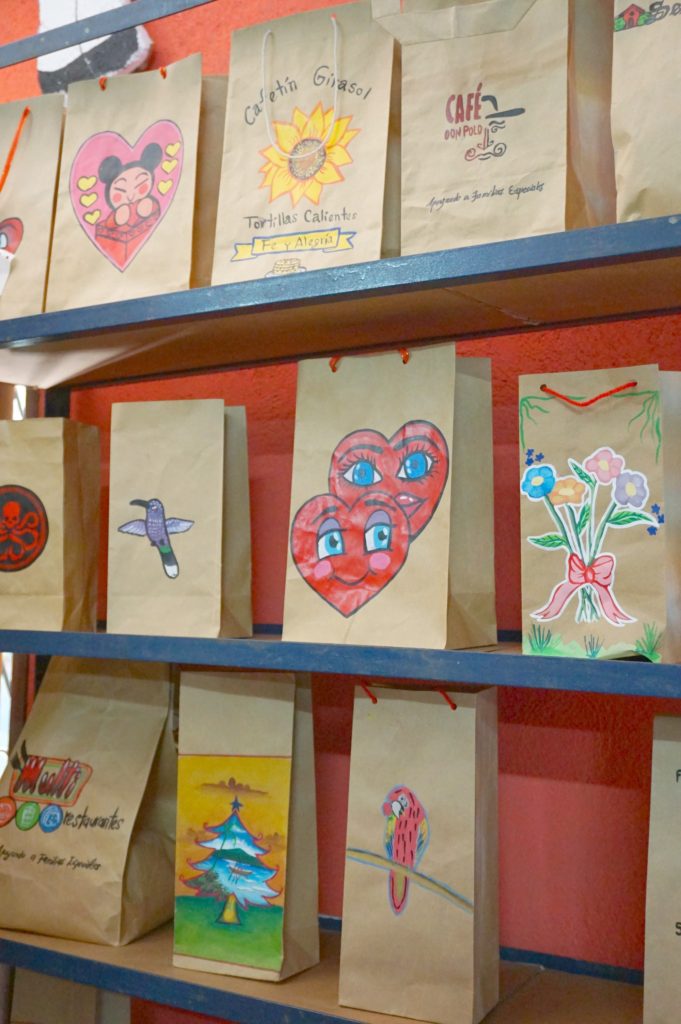 Sometimes they paint the bags.  They also make reusable shopping bags, and our group bought a bunch of them. 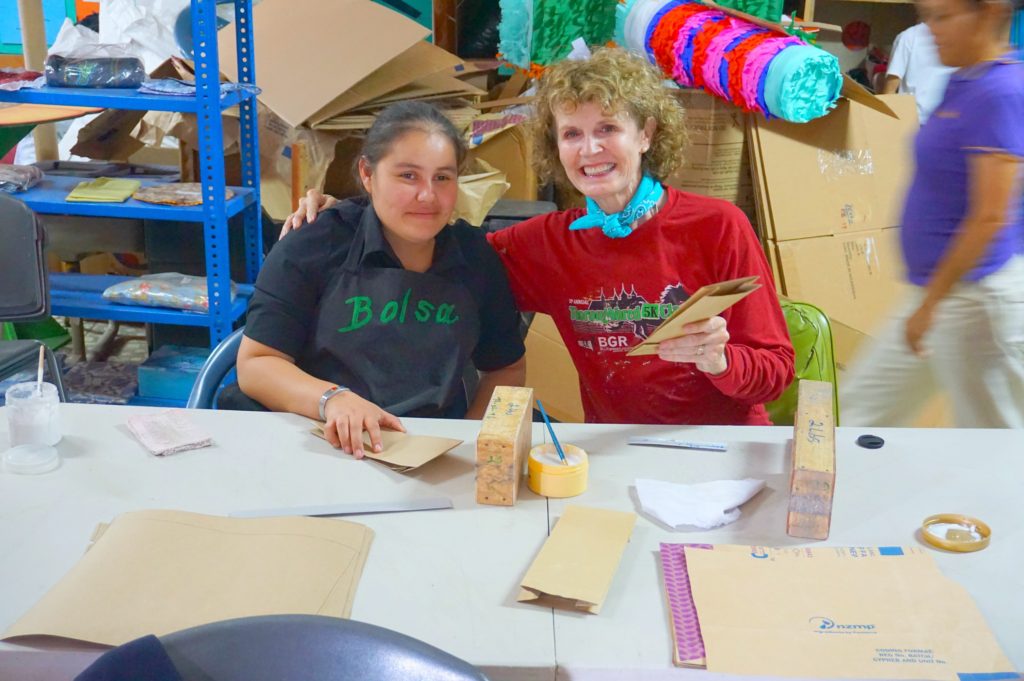 I worked at the recycle center one day with a blind girl who “oversaw” my work with just her touch.  When I messed up, she made me redo it.  We will do a post soon to teach you how to fold bags.  You can see how happy I was after making a bag correctly.  This young girl has four siblings, and she and all of them are blind. 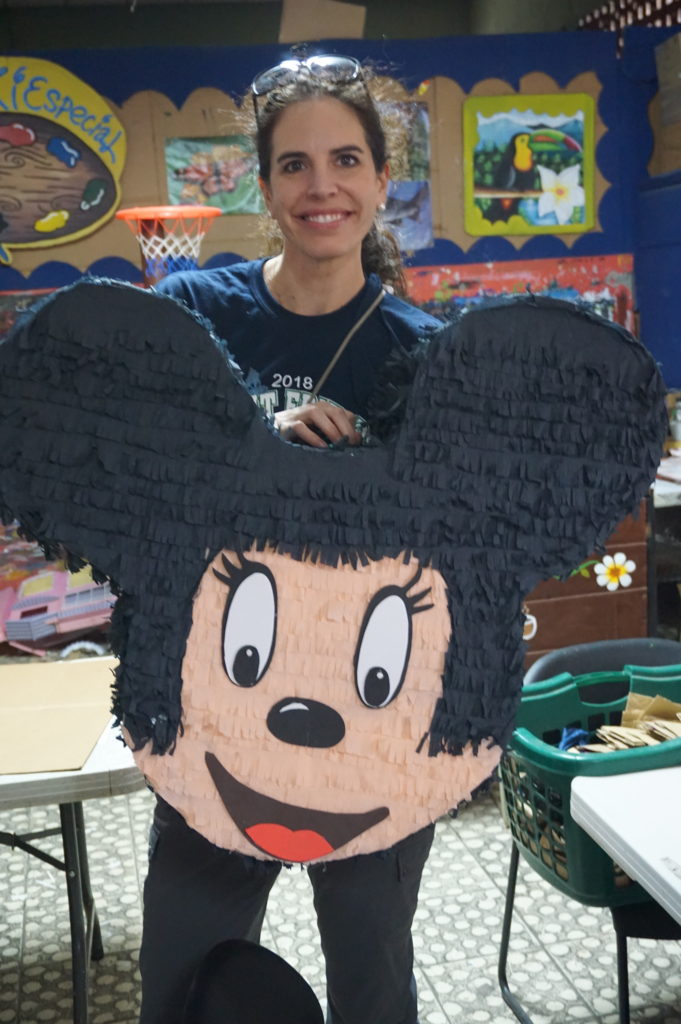 They also make adorable pinatas, which they sell.  Little Miss worked beside a blind boy and made this adorable Minnie Mouse pinata. 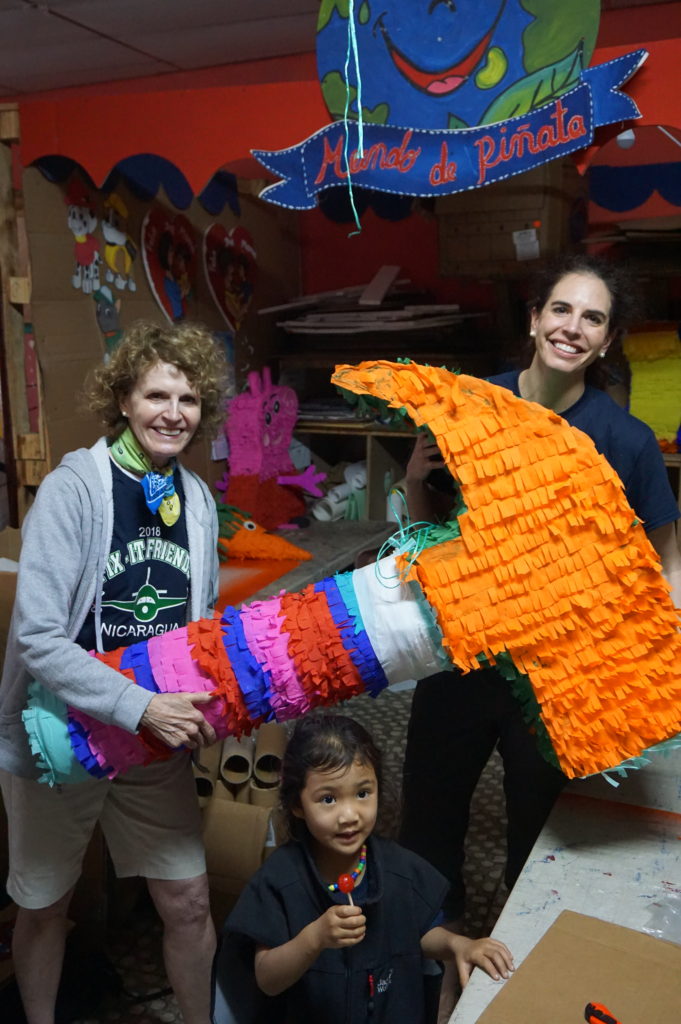 Jordan and I especially liked this hammer. 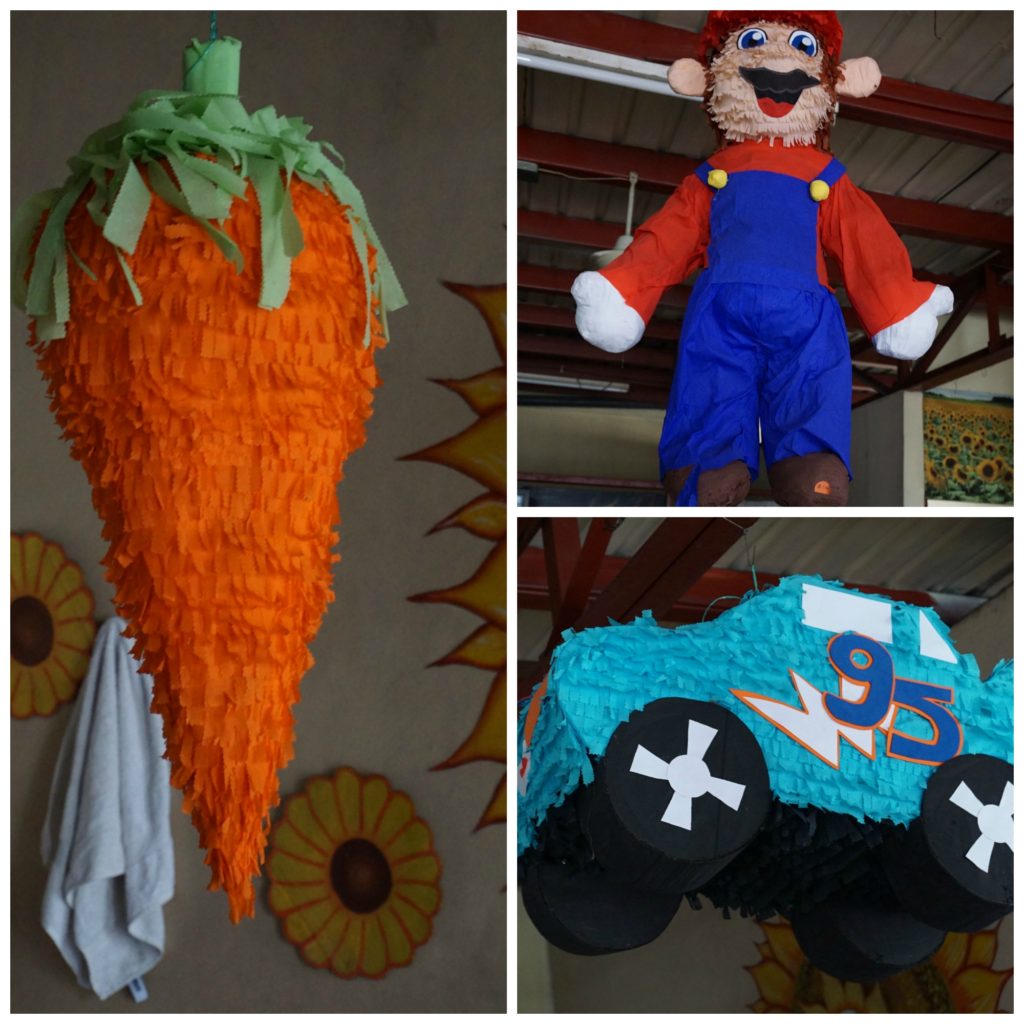 Get this – their pinatas only sold for $5.00.  They also separate colored paper from white paper.  This task was done by young people with Down’s syndrome.  Plus, they recycled plastic bottles.

While we were there our group had a roof replaced on the learning center in the park, painted the yogurt factory, did back-breaking concrete work at the restaurant, worked at the recycle center to improve drainage outside the building, and helped with the recycling. 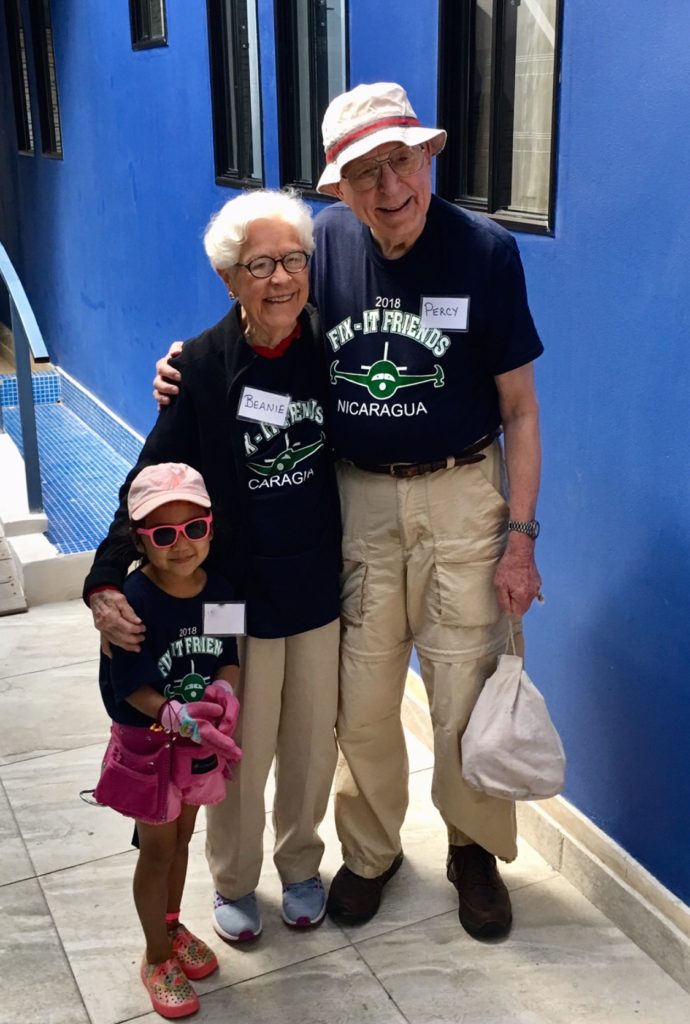 And just to prove that you are never too old or too young to volunteer, here is three-year-old Little Miss with the two senior members of our group.  Beanie is 93 and from Kentucky, and Percy is a 93 year-old retired Baptist minister from Iowa.  They all did what they could, and that contributes to our group’s success.

It was a fun-filled busy week, and we stayed in a quaint, small family-run hotel that served us wonderful breakfasts made from scratch.  I ate pancakes every morning and learned it was the owner’s recipe.  We had wonderful meals each night at local restaurants and rested well for another busy day.  It was a wonderful experience that we will never forget.

Our Trip to Nicaragua – Part 1

Why We Are Going to Nicaragua