Well, it’s time for another update on the fixer upper.  If you are new here, then you can get the back story on the fixer upper here.  Mr. Right was out of town for a month, and I only stopped by to check on things a few times.  Last week we made a visit, and spent some time there looking over things and checking on the progress.  Let’s just say this project is moving slowly but smoothly.  You might recall that the last time you saw the little bungalow, the floors were all out , and there were only floor joists.  Well, now we have subflooring.  Another new addition is the roof.  It looks so good with its deep black shingles. 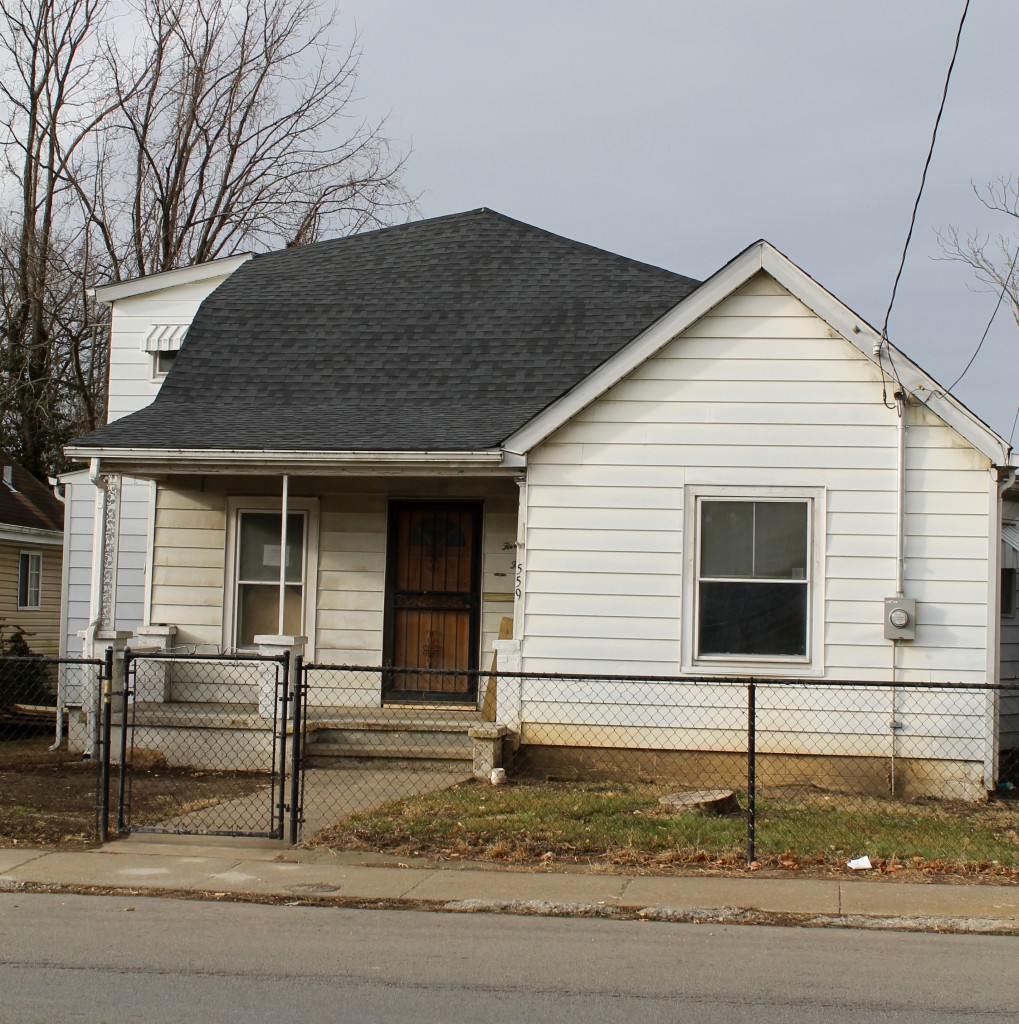 This is what the outside looks like now.  There’s a new roof, the trees, which were in bad shape, are gone, and the porch has been cleaned up. 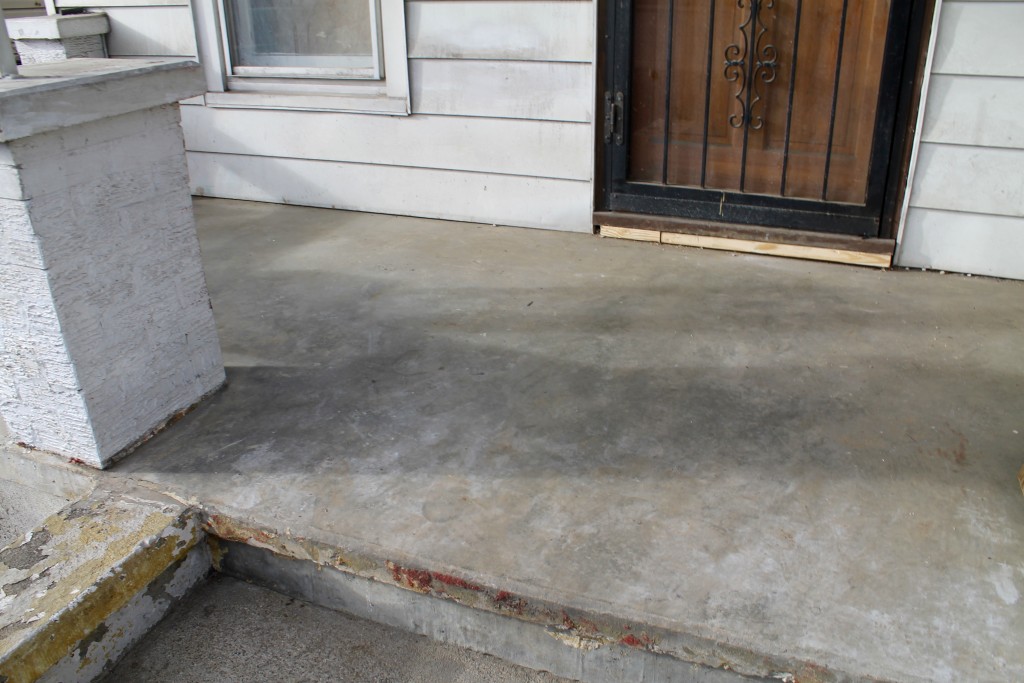 This perfectly good concrete was previously covered with a dirty, yucky red indoor/outdoor carpet.  Why that was there in the first place, we will never know.  But this bare look is so much better.  It can be swept now or hosed off when needed, and it is the beginning of a nice place to sit after a hard day. 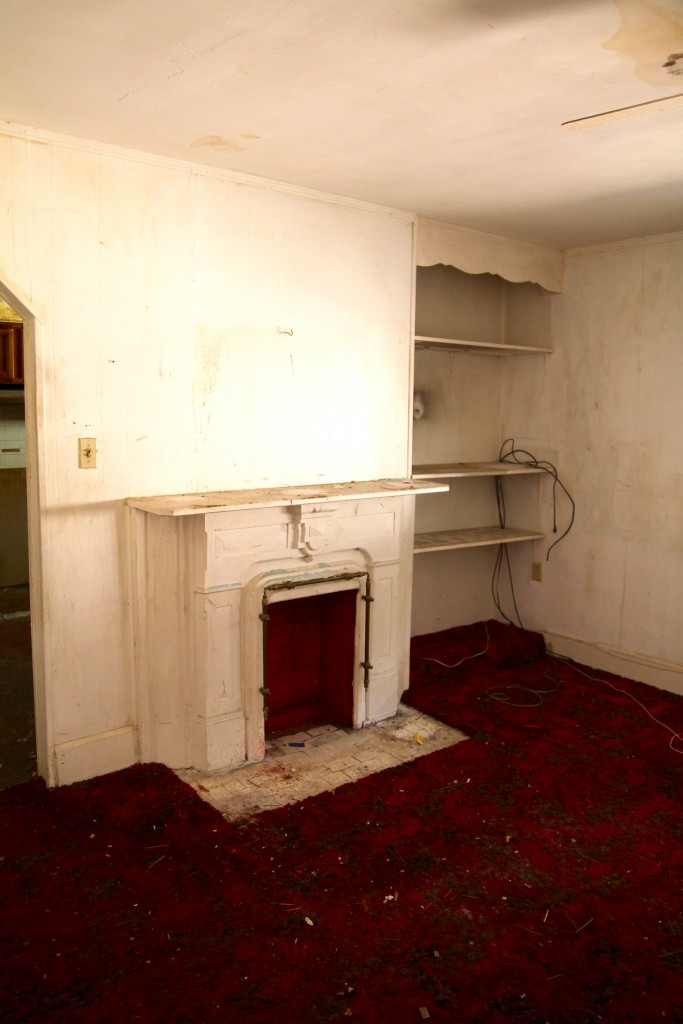 This is the before of the front room on the right…….. 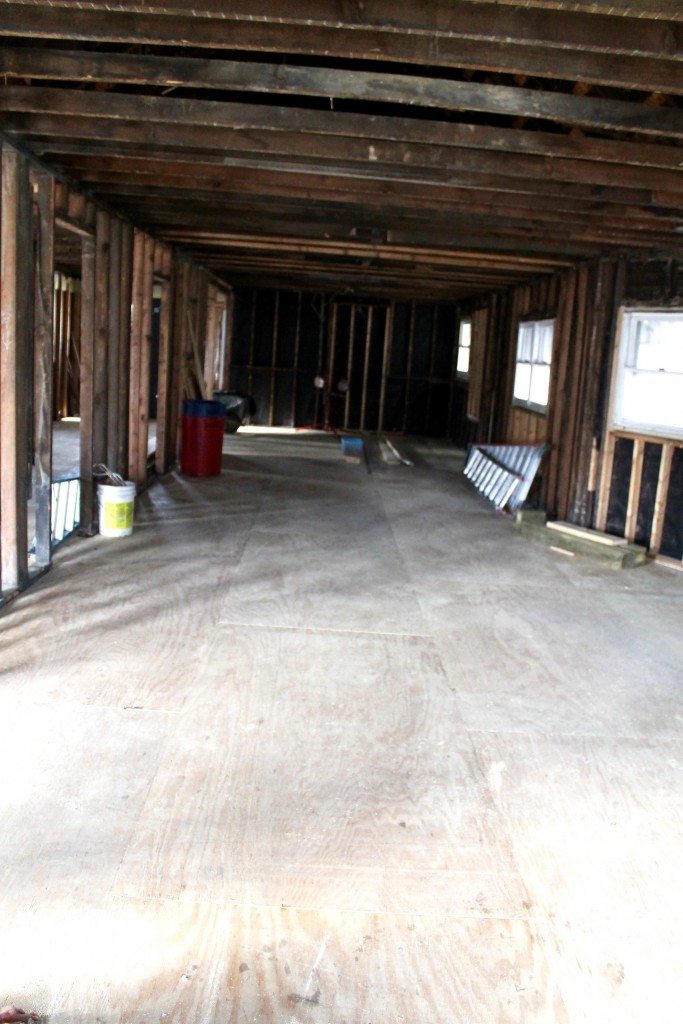 and here it is now.  Two fireplaces and two walls have been removed to give a clear shot from front to back.  This red room was a bedroom, but now it will be the dining room and open kitchen.  All the way in the back where the kitchen was before will be a bedroom.  The whole first floor has its subflooring which is nice since Mr. Right fell into the pit and ended up in the emergency on our last visit.  He now has a big ole scar on his forehead as a souvenir. 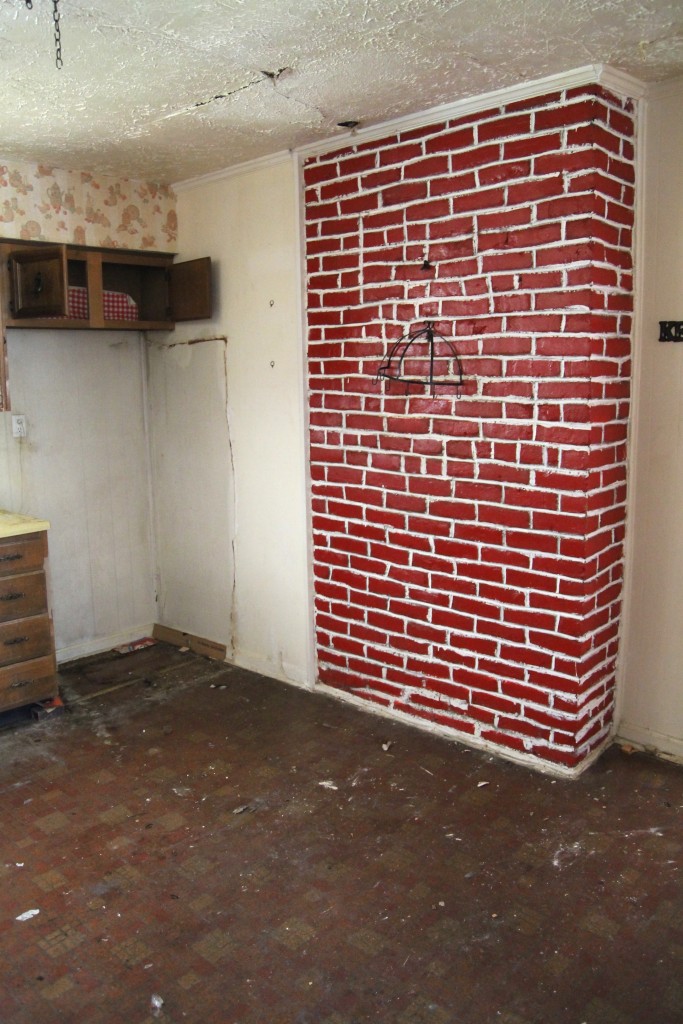 This is the other wall that has been removed.  This was the kitchen in the back of the house, but now it will be a bedroom. 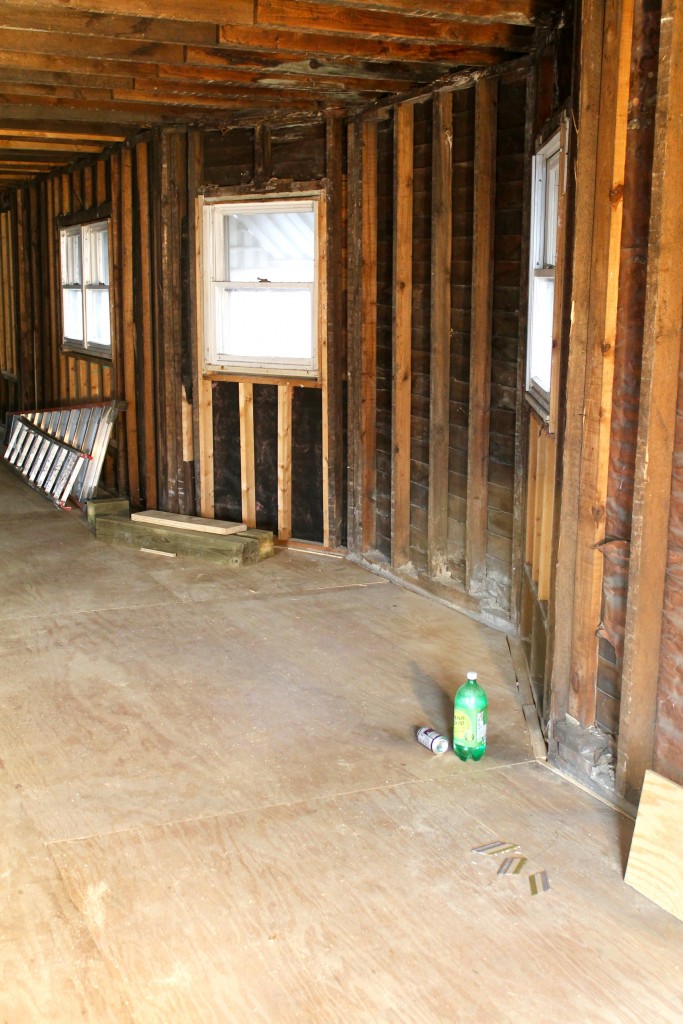 The kitchen will be in between the front dining room and the back bedroom along with a full bath and laundry room.  That bay area will be the kitchen sink, and there will be a peninsula starting about where that soda bottle is. 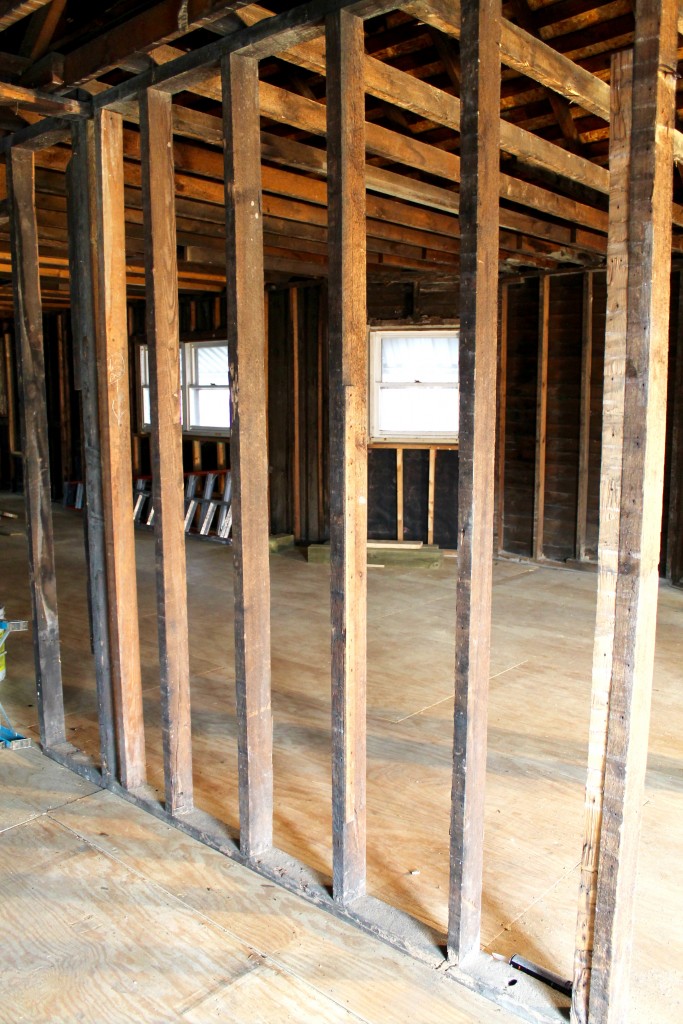 This wall will be removed and replaced with a support beam.  That step will make the kitchen open to the living room, too. 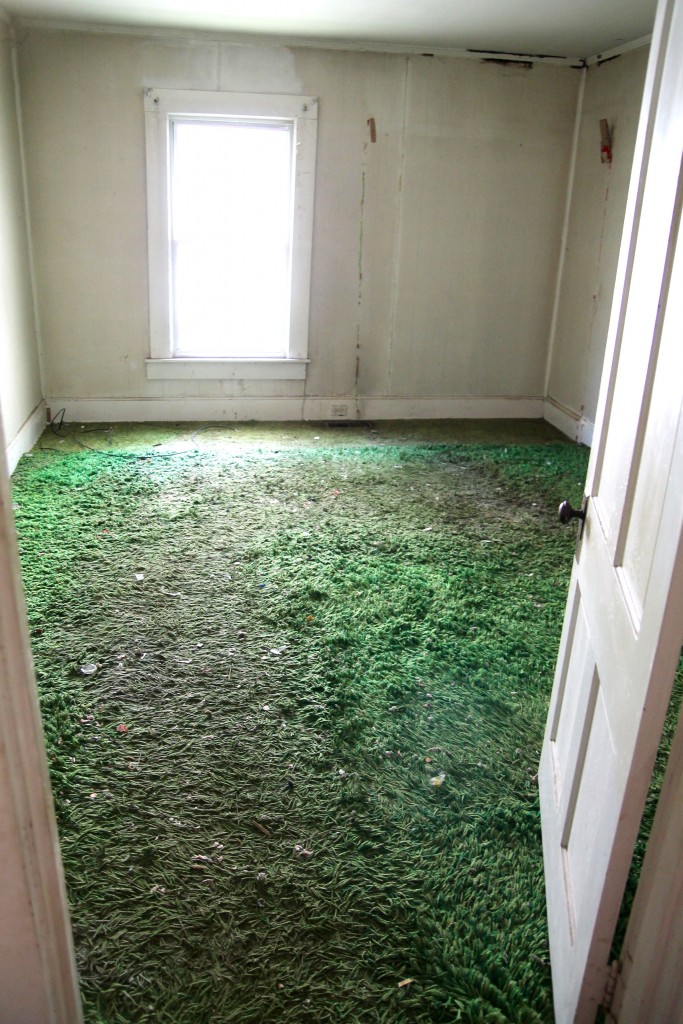 Do you remember this bedroom?  It’s all bare now, too.  All of the windows are being replaced, and our architect told us that some of them don’t meet code.  Probably when this house was originally built back in the 1920’s, there wasn’t a code.  However, the windows in the new bedrooms have to be a certain size so someone can crawl out in case of fire.  So, new casing will need to be cut out and framed. 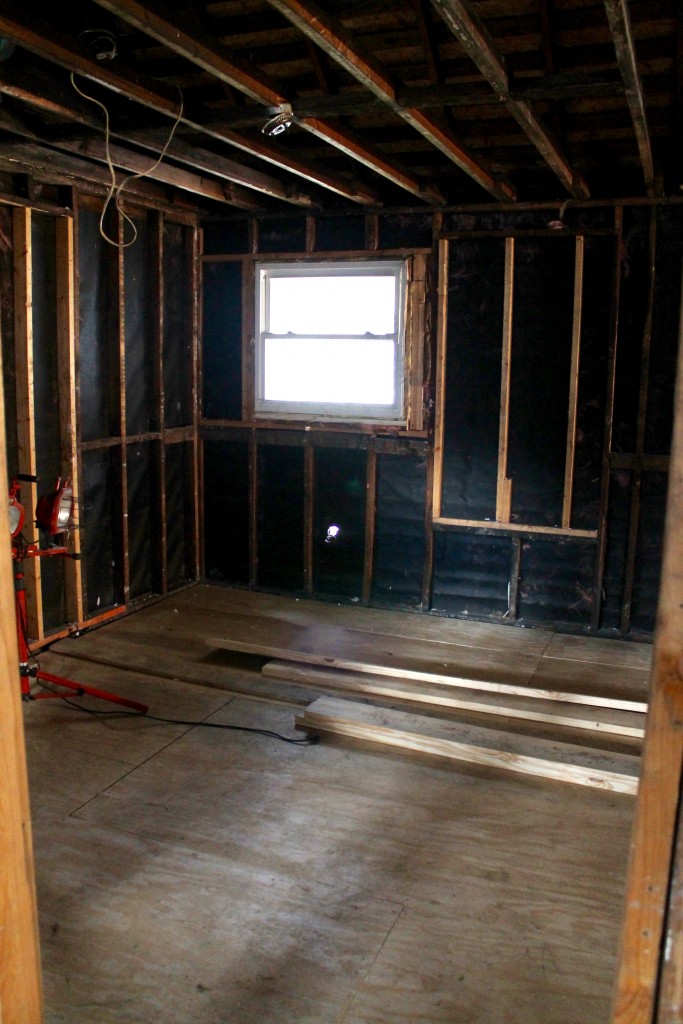 This was the mudroom before, and now it will also be a bedroom.  So, there will be three bedrooms and two full baths on the first floor and a bedroom without bath upstairs. 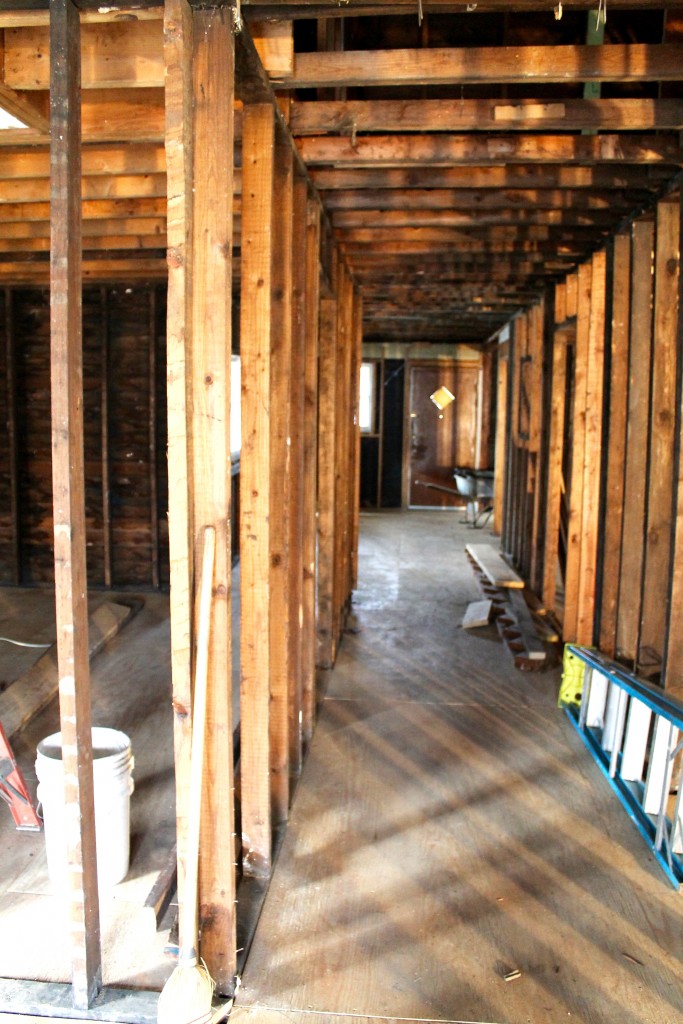 Bobo and our friend Dirk came up with the way they wanted the rooms to be, and now our architect is drawing up the plans.  I hope to get a small version to show you here on the blog.  That would make explaining all of this so much easier.  Next up will be framing the new rooms, then come the plumbing and electricity.  I will give you another update in about a month.

We Really Bought a Fixer Upper