Having a television over the mantel is a great idea, but my mom and I have both struggled with the cords and equipment.  After a few years of looking at a box on her mantel, she finally hired a professional to relocate boxes and wires in her home.  We did finally install our television above the mantel, but we are still working on hiding a few more cords.  Along with all the cords, we also had our internet, DVD player, and other components that were somehow related.  For the longest time they were just thrown in a wooden, box but it looked sloppy. 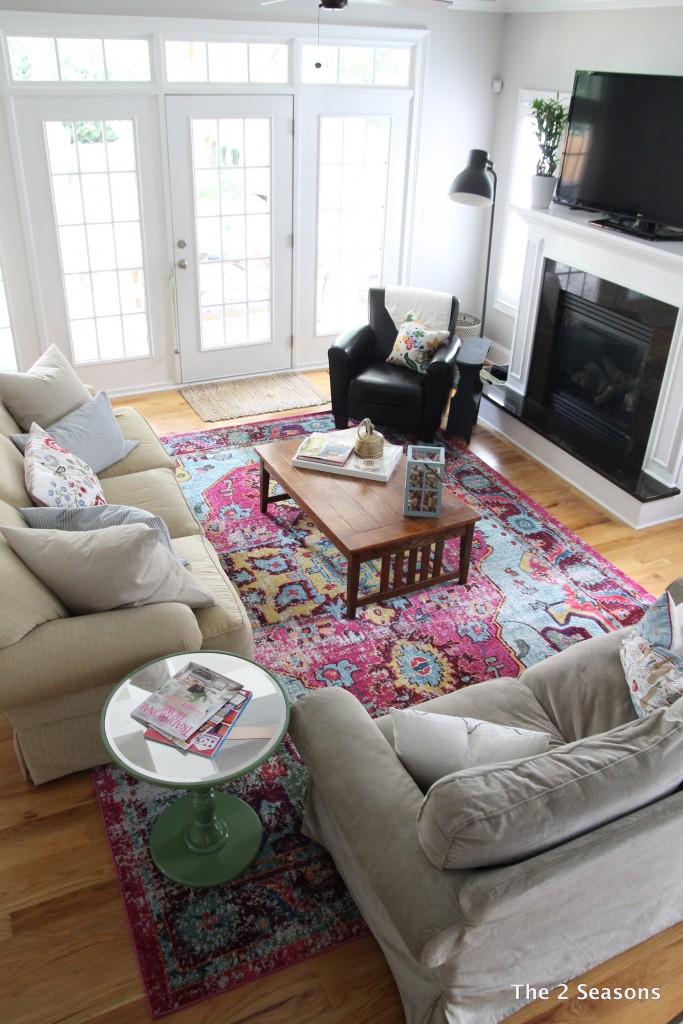 The box is hard to see in this photo, but it is right beside the fireplace and just filled with cords and other things. 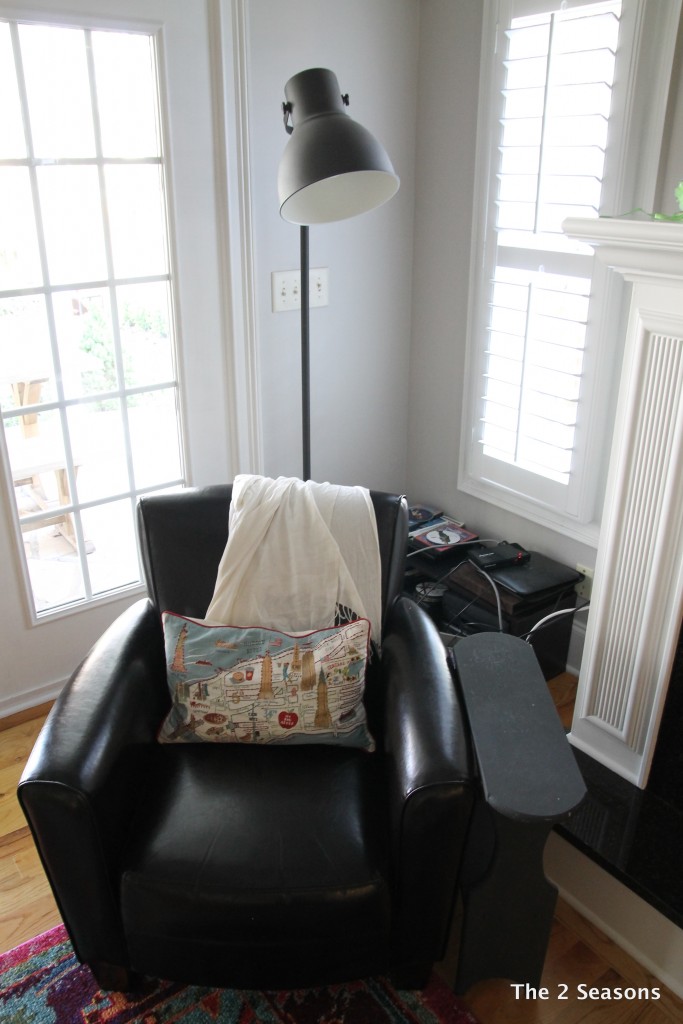 At some point the box was moved, and this happened.  A whole pile of stuff accumulated, and it drove me crazy.  Then my mom suggested that a small dresser in front of the window could help.  I loved that idea.  I just didn’t want to block the light from the window, so the dresser had to be a small one with the right proportions.  So ,we each began the search. 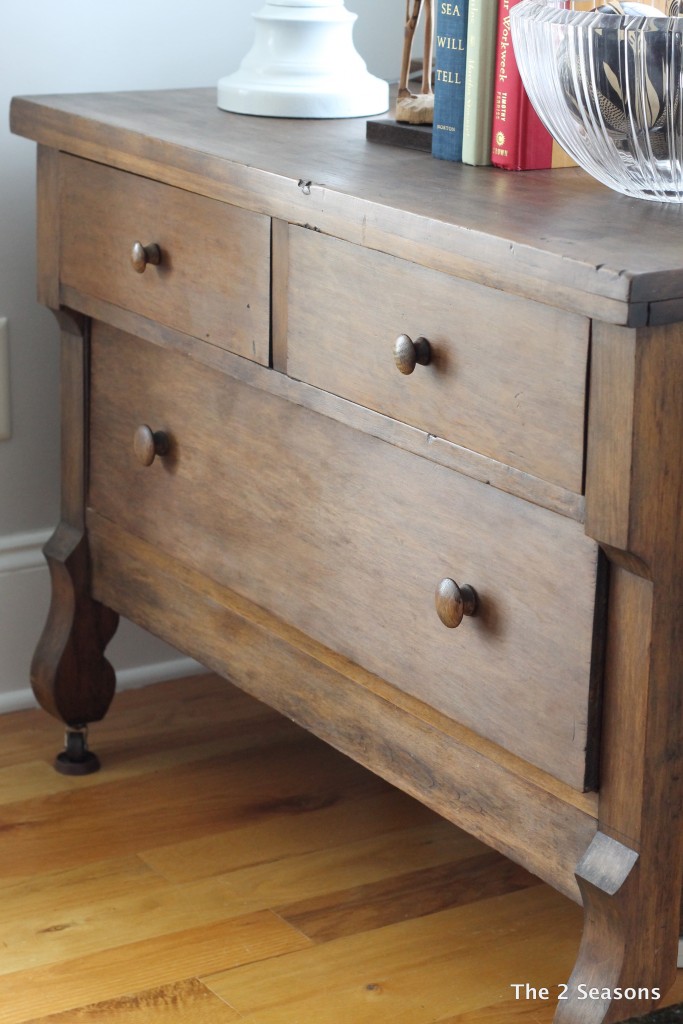 Finally, after a few months of searching, I found this beauty at the Habitat for Humanity Restore in Charlotte.  It was the right width and was not too tall. 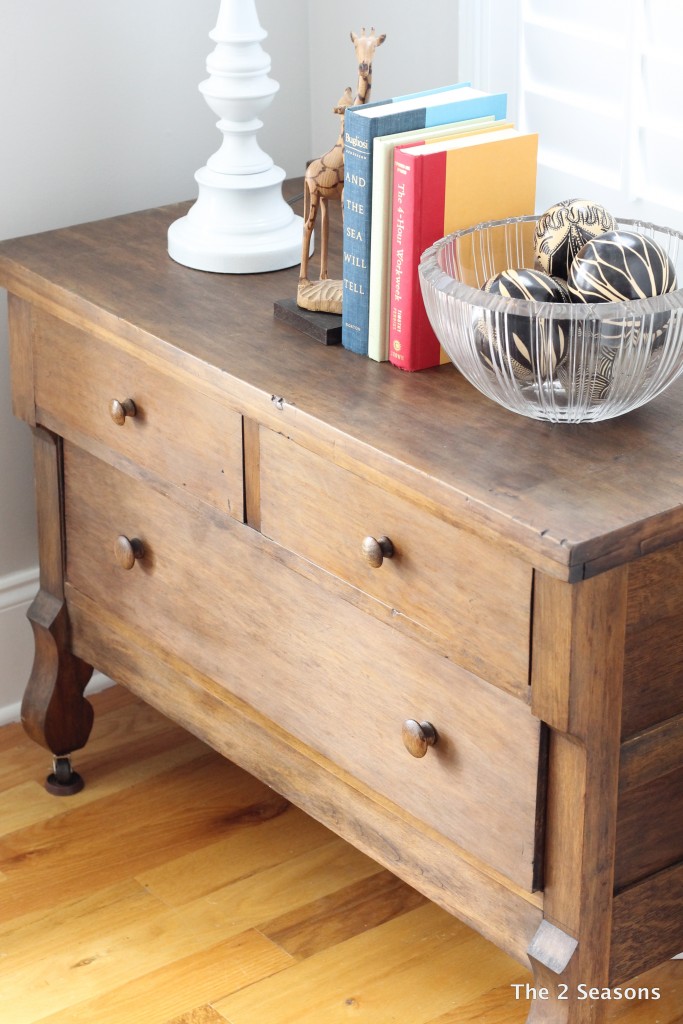 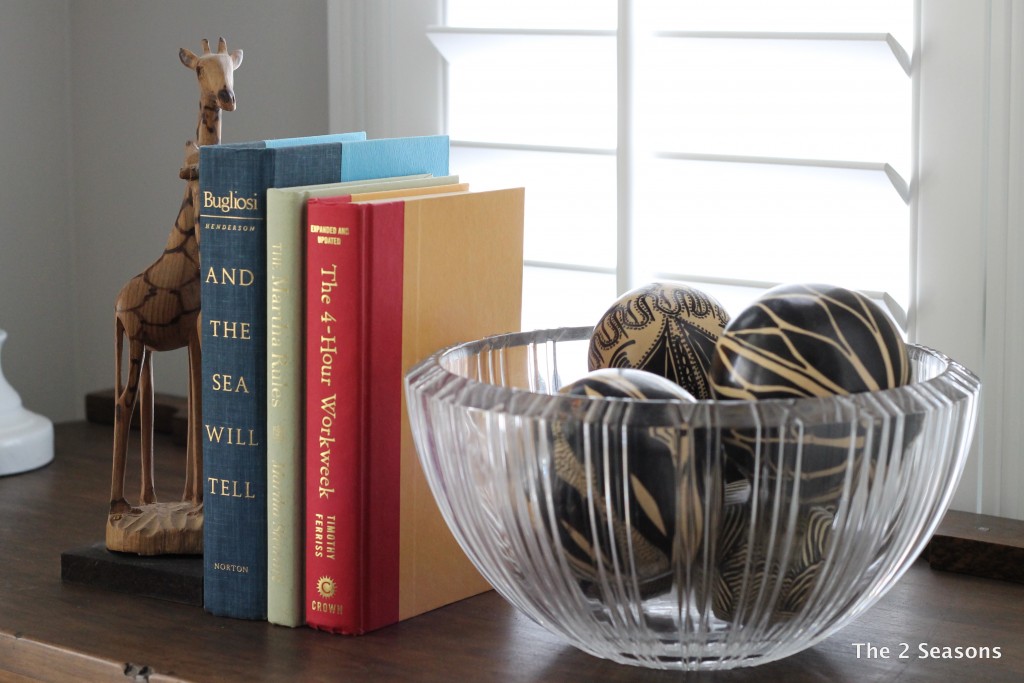 Even though it is spring right now, I didn’t decorate for the season but used what I had on hand.  The crystal bowl was a wedding gift, and the wooden balls are actually fruit seeds that are decorated with a sharpie marker.  I found them last year in Zambia and loved them.  I loved seeing the man make them.  He usually sold one or two to a person, but a few of us bought all that he had. That made everyone happy but especially the artist. 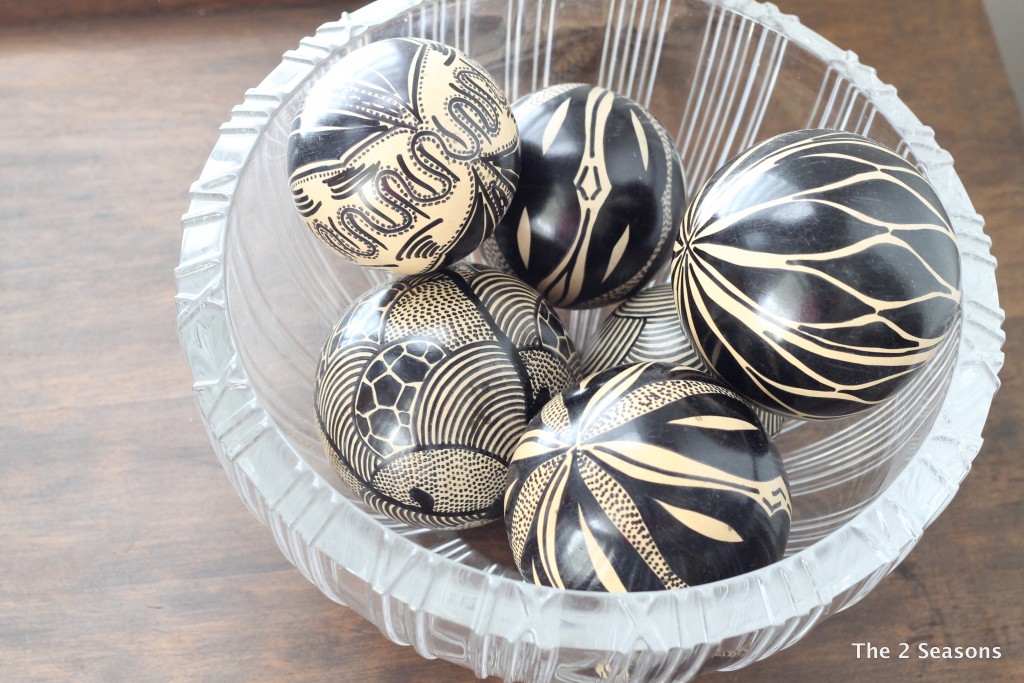 They put rice inside so you can shake them and make your own music.  Little Miss likes that aspect of the art.  Along with the bowl and balls, I added some books and a wooden giraffe that we bought in South Africa. 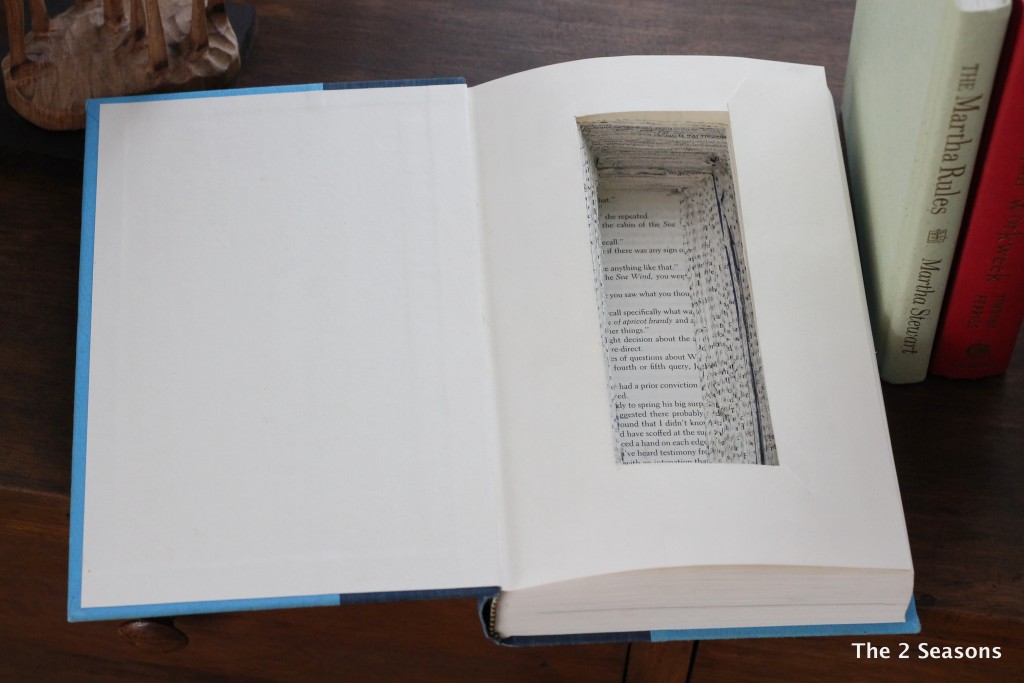 Now, here’s a funny story. I just grabbed some books off of our bookshelf to use.  One evening Yankee sat down and said, ” Hmmm, what is this book about?”  (It was the blue book.)  He opened it up and found a cut-out on the inside.  This was the book I used to hide our remote control in Syracuse.  I forgot which book it was and thought it didn’t make the move to Charlotte with us.  It turns out that it did.  It was a fun little laugh in our house. To hide the components, I just put everything in the large drawer and then have one cord coming out to the plug.  The two drawers on top hold some DVDs. 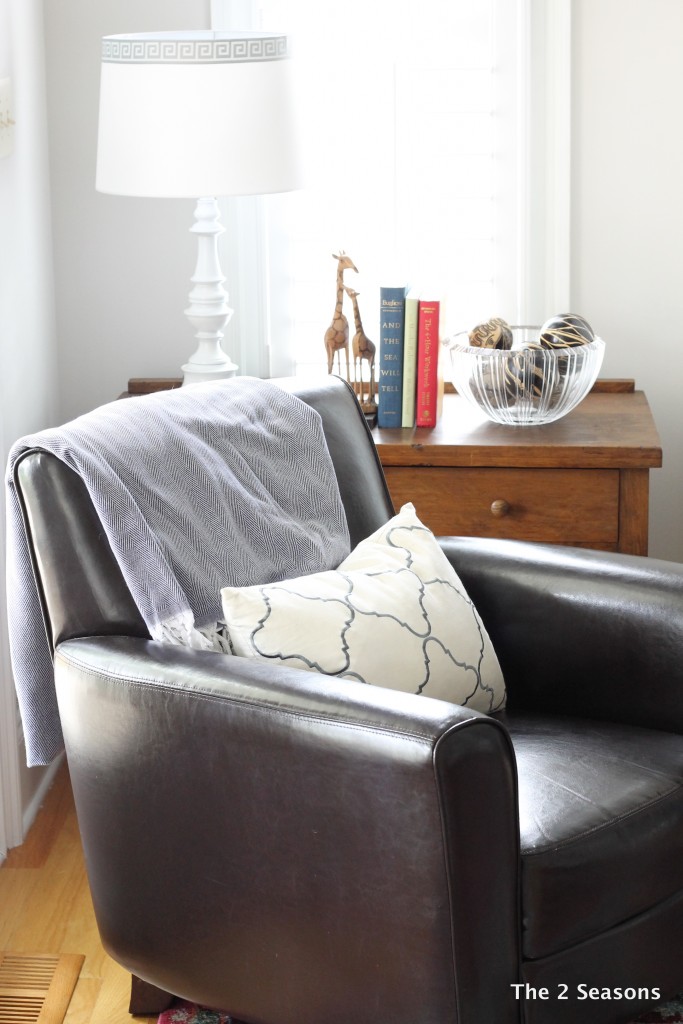 It is the perfect little addition to that corner that looks good and adds function.  The chair will eventually be replaced but first up comes the new sofa which I ordered last week!

UPDATE: I have been asked about the product we have used to make this all easier.  Click here to read more about what we used.

A New Look for the Fireplace Area

Decorating Around the Television

How to To Hide Your Remote