Ever since Jordan and Mr. Spring moved into their 1928 bungalow, I have been itching to get my hands on their foyer.  Foyer might be the wrong word for it.  It is more like an anteroom that serves as a buffer from their front porch to the living room that it leads into. 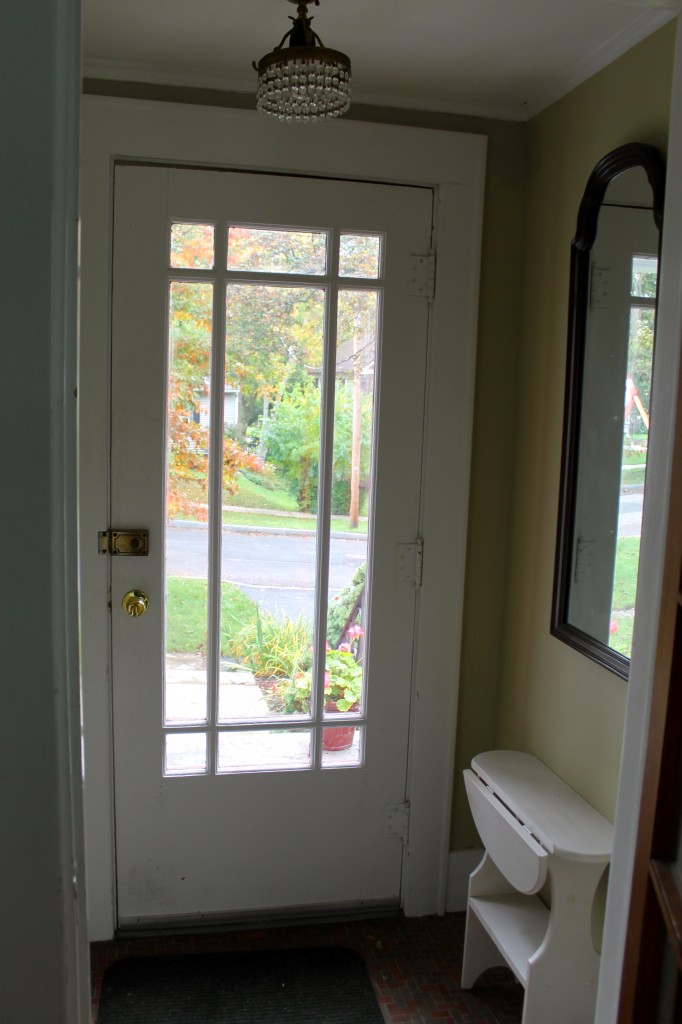 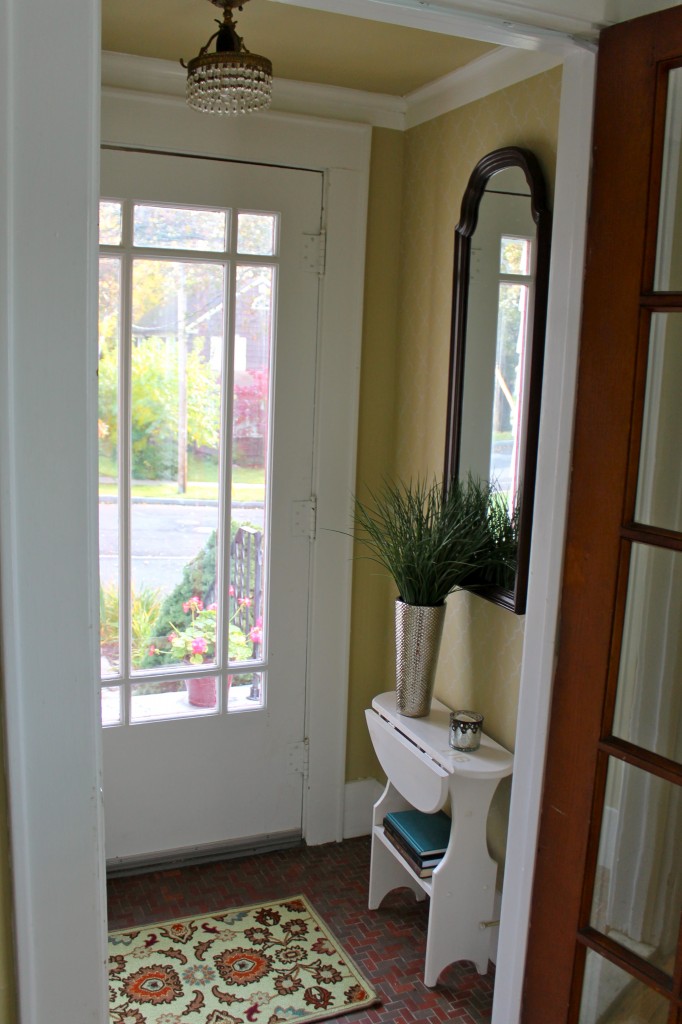 ….this with just a little effort and a few dollars.  It only had a little free table, a mirror, and a plain mat.  That’s it.  It needed some love so that it would be as charming as the rest of their place.  However, every time that I visited her there were always more important projects to tackle like the kitchen walls, kitchen cabinets, dining room, office, bedrooms, back porch, and the laundry space in the basement. 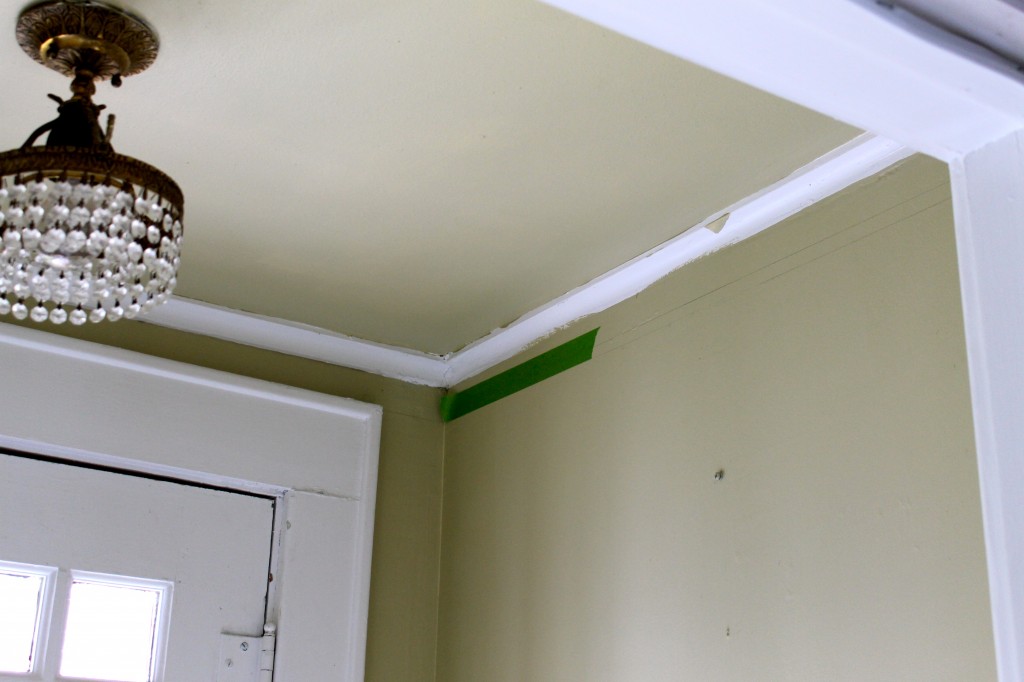 Finally, last week there was time for me to get to work.  First, I repainted the walls ( Safari by Purcell paints) in the same color and painted the white ceiling to match.  Since the wall color already matched the living room, we didn’t want to change it.  The fresh coat of paint really brightened it up, though.  Jordan selected a simple stencil to add some interest to the walls.  Since the house is old, all of the walls aren’t exactly straight.  That’s a problem when stenciling, so I used the level to find a straight line. 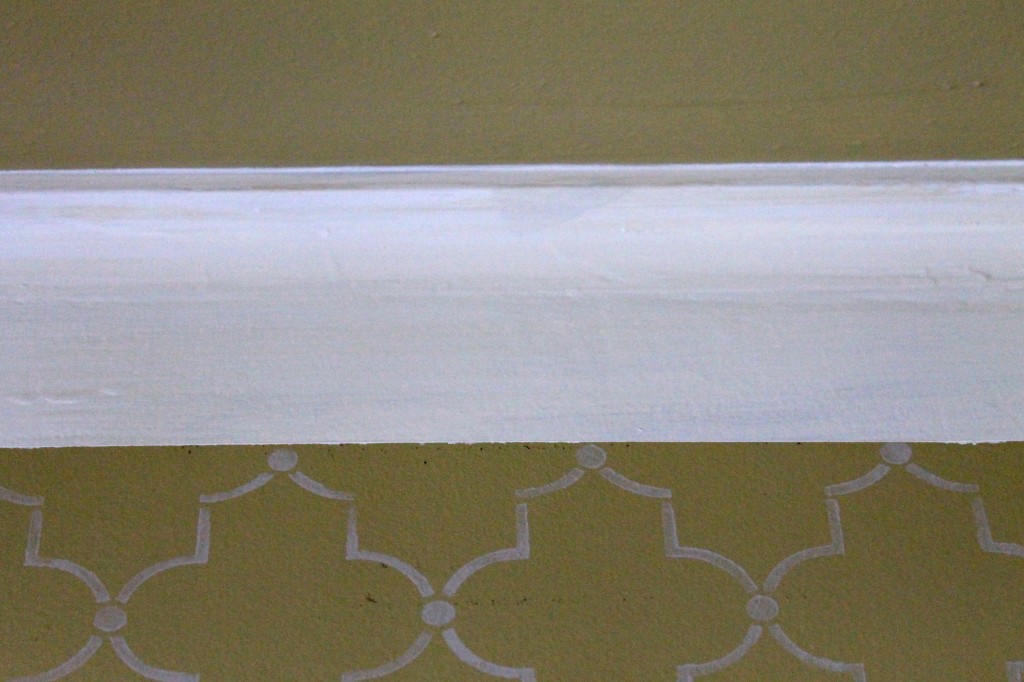 Then I visually widened the border with paint.  It did two things:  It made the the border look wider and nicer, and it gave me a straight line to follow for the top of the stencil. 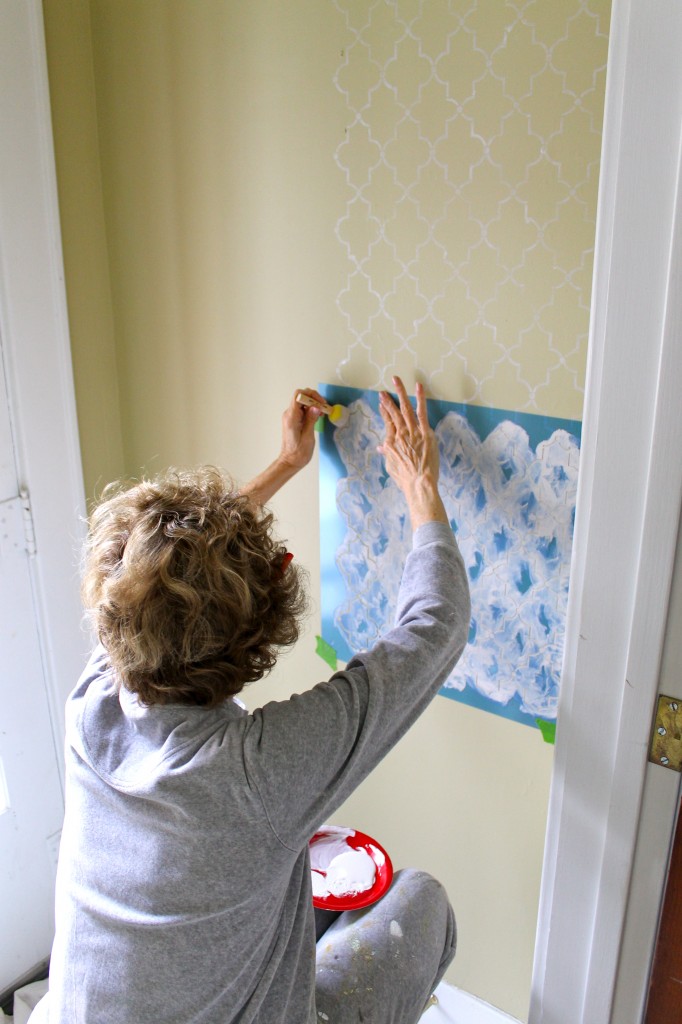 Even though it was a tiny area, the whole painting and stenciling procedure took about five hours.  I also had to patch an area on the ceiling that had received some water damage before they replaced their roof. 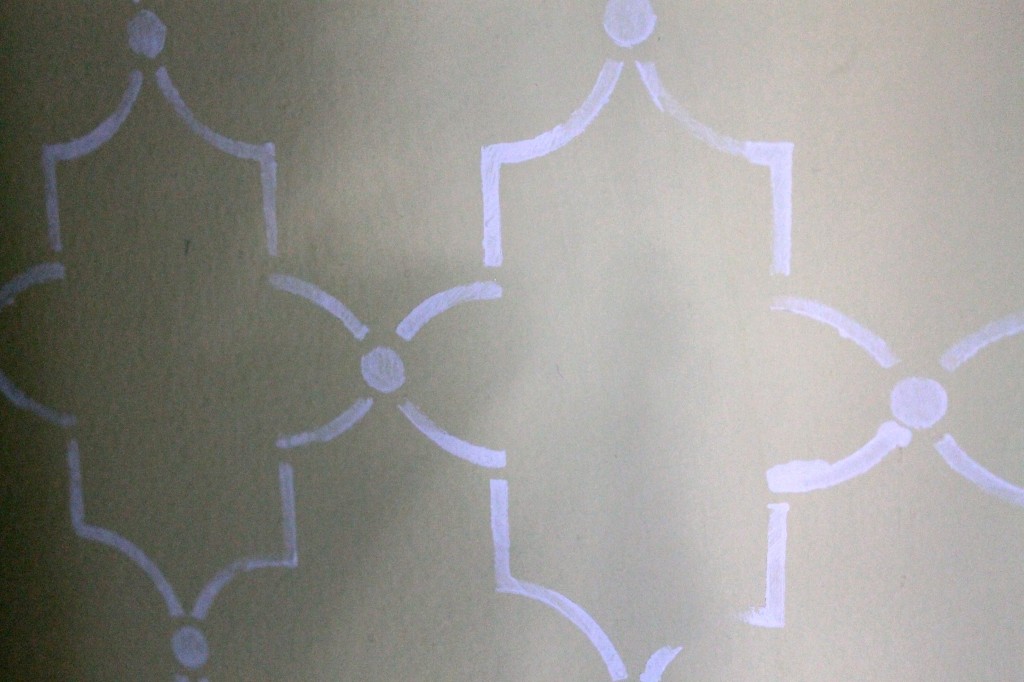 We used some stencil paint left over from our Martha Stewart project and mixed it with some acrylic paints she had on hand.  One of the paints had an iridescent sheen to it which gave the finished stencil a slight sheen.  It was a nice touch.  The stencil is very subtle and doesn’t always show up.  It all depends on the way the light hits it.  It’s like a secret.

After everything was dry and the painting tools were put away, we brought the same table back into the room but added a candle, a planter, and some books.  We also purchased a colorful rug that really added the punch the room needed. 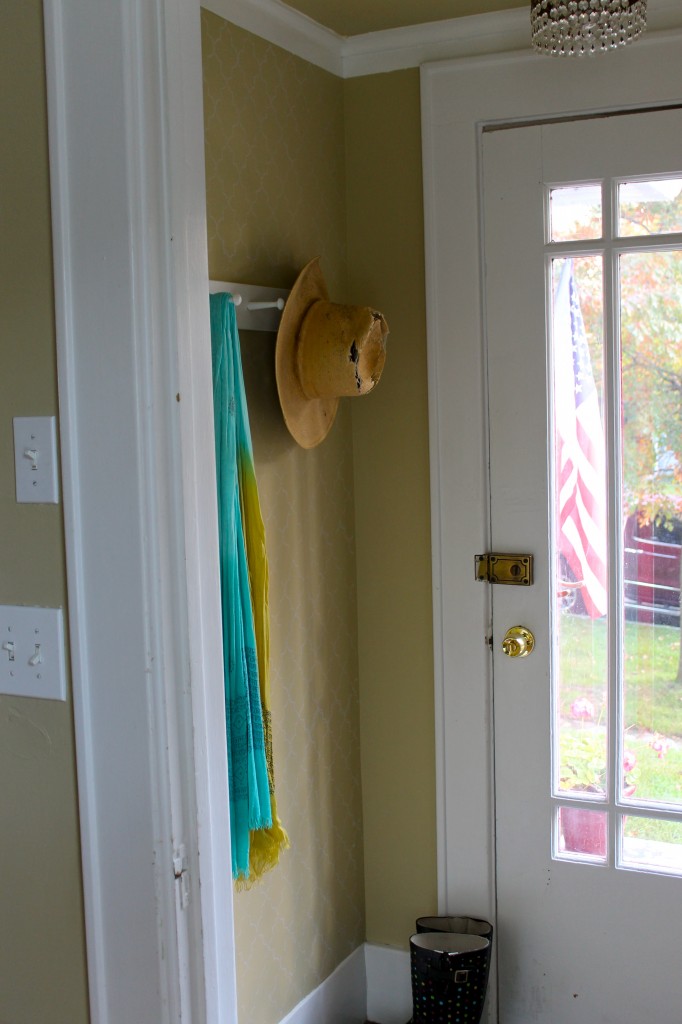 A scarf that matches some of the accessories in the rest of the house, an old cowboy hat from a real wild west cowboy, and some boots completed the accessorizing. 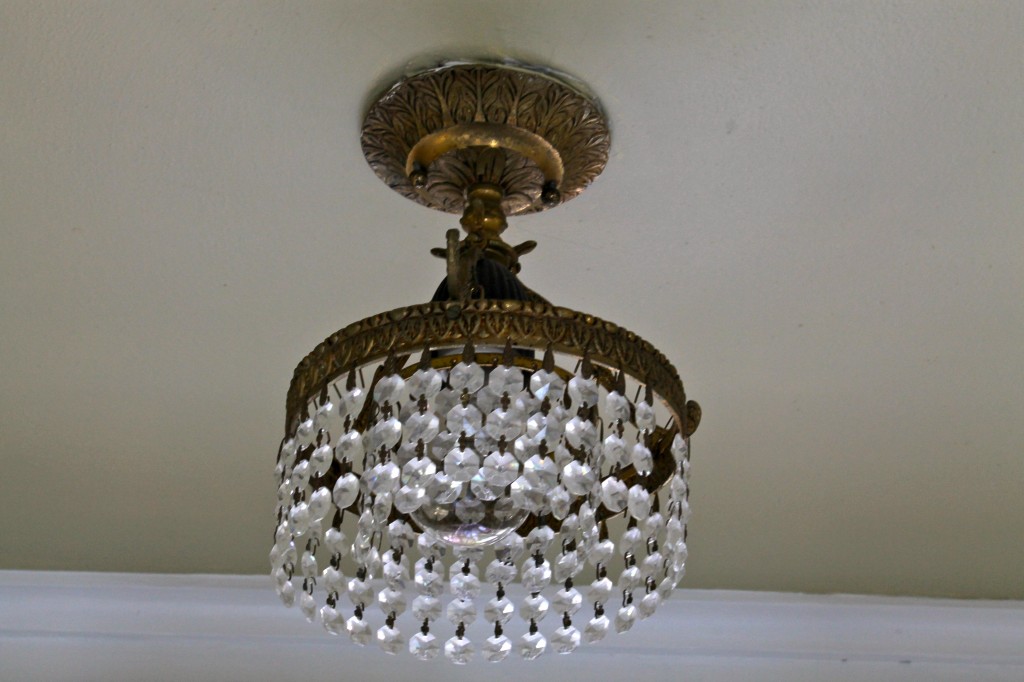 We love the original light that is in there and the little bit of sparkle that it adds.

And we love the improvements to the room even more.  And just think.  The only things we bought were the stencil with a 50 per cent off coupon and the rug.  I am crazy about projects like this!!

Linking to Wow Us Wednesday at Savvy Southern Style.

New Light in the Dining Room

Updates in the Powder Room