While we get back to our regular routines, I decided to  tell you about a book I recently read.  I downloaded Whateverland for my entertainment during a recent long road trip. It is written by Martha Stewart’s daughter Alexis and her former radio co-host, Jennifer Koppelman. 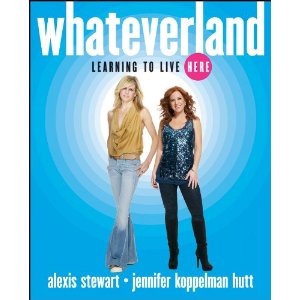 I am a big fan of Martha Stewart, read here, so I was hoping to learn some fascinating facts about her that I didn’t already know.  Well, there were some facts, but they were far from fascinating.  I did learn though that Alexis is an ungrateful  daughter who really thinks her life is/was rough, and she wants us all to know how miserable she is/was.  She claims it all began when her parents moved from NYC to preppy Connecticut.  She seems to forget that her mother started her ultra successful career in their Turkey Hill home that she moved to.

Jennifer, who got her gig because her daddy works for Martha, has her own share of complaints.  The biggest one is that she was so rich that her parents had her driven everywhere by a body guard so she wouldn’t be kidnapped.  I’m not kidding.

The whole book is pretty much one complaint after another.  I give it two thumbs down.  If you still want to read it, check it our of the library and save your money.

A Review of Our Ruggable Rug

Review of a Drawer Dishwasher

Modern Hospitality – A Review and A Recipe