Hello, everyone. We spent about 10 days recently in the Philippines on the annual volunteer vacation that my husband and I organize, and I want to share everything with you. I have almost recovered from the jet lag. The time in the Philippines is 11 hours ahead of us here in Kentucky, and it just turned my whole system upside down. When my body was thinking it was time to wake up, in reality I was sitting down for dinner. We left on a Wednesday morning, and after 20 hours spent in three airplanes, and eight hours of waiting in airports, we arrived in Manila on Thursday night.

Here’s a little info about these volunteer vacations that we do.  This was the 20th year that we have gone to a developing or third world country to do some good.  Our group is made up of friends from all over the country and from several other countries.  Each year one or two cannot go because of extenuating circumstances, so we invite one or two newbies to join us.  Over the years the following religions have been represented:  Catholic, Jew, Mormon, Quaker, Atheist, Buddhist, and Protestant. We are married, divorced, widowed, single, gay, and straight.  We are a broad range of ages, and the biggest thing is that we are both Democrats and Republicans.  We are not a non-profit organization.  We are just some ordinary people with a little extra money and a little extra time.  We are proof that normal people can make a difference in the world. 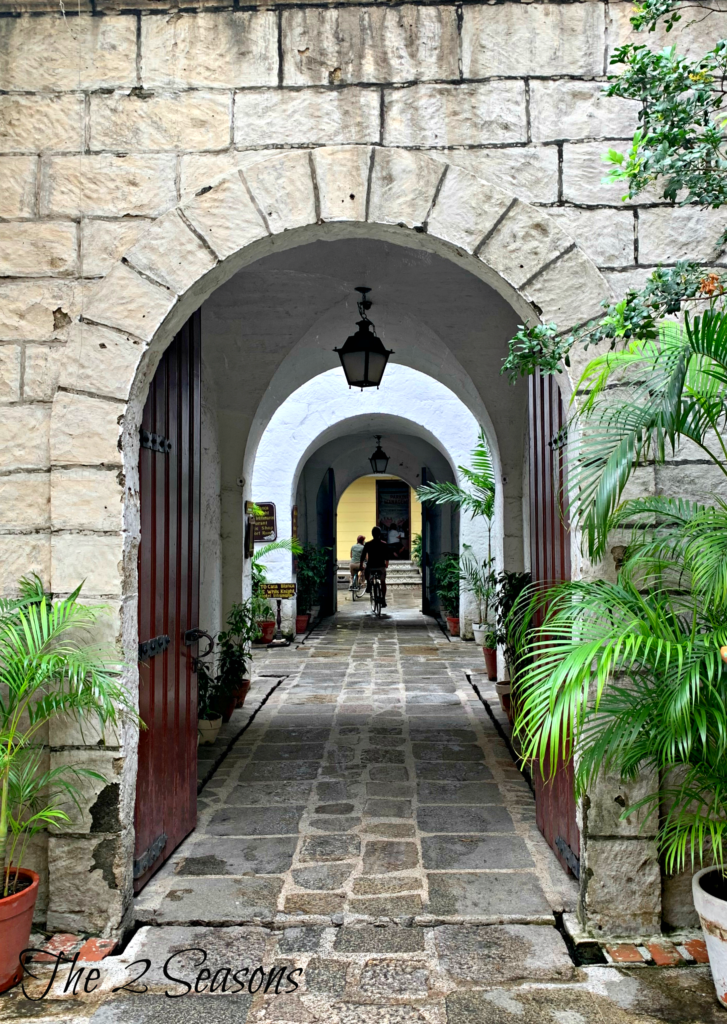 Manila is a crowded, busy, dusty city. Even at 11 p.m., there was traffic that resembled rush hour here. We had a hotel on a nice quiet street with plenty of restaurants around. We did nothing on the first day we were there so we could just rest a little and hang out with our friends who met up with there. 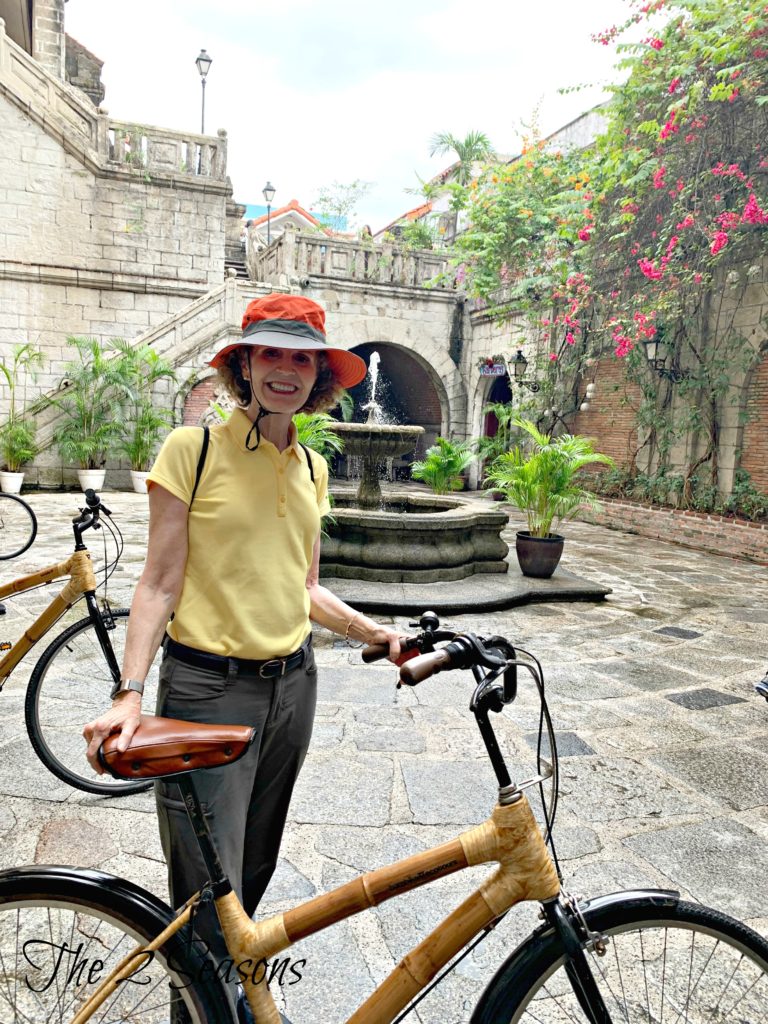 Then on Saturday morning we took a bicycle tour of the old city. We rode on bamboo bicycles, and that was so much fun. They are much stronger and sturdier than you would think. It was a hot, muggy day, but we enjoyed the breeze we felt while riding. 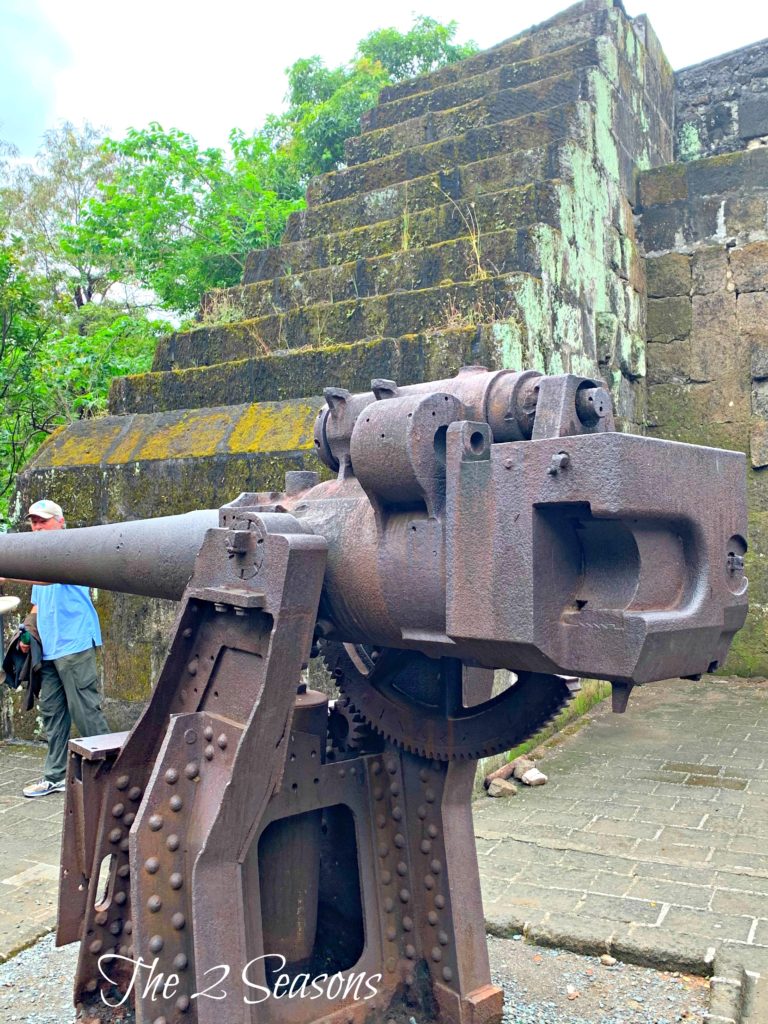 We had an excellent guide who gave us the historic background of the over 7000 islands that make up the Philippines. Most interesting was the history of their involvement in World War II. 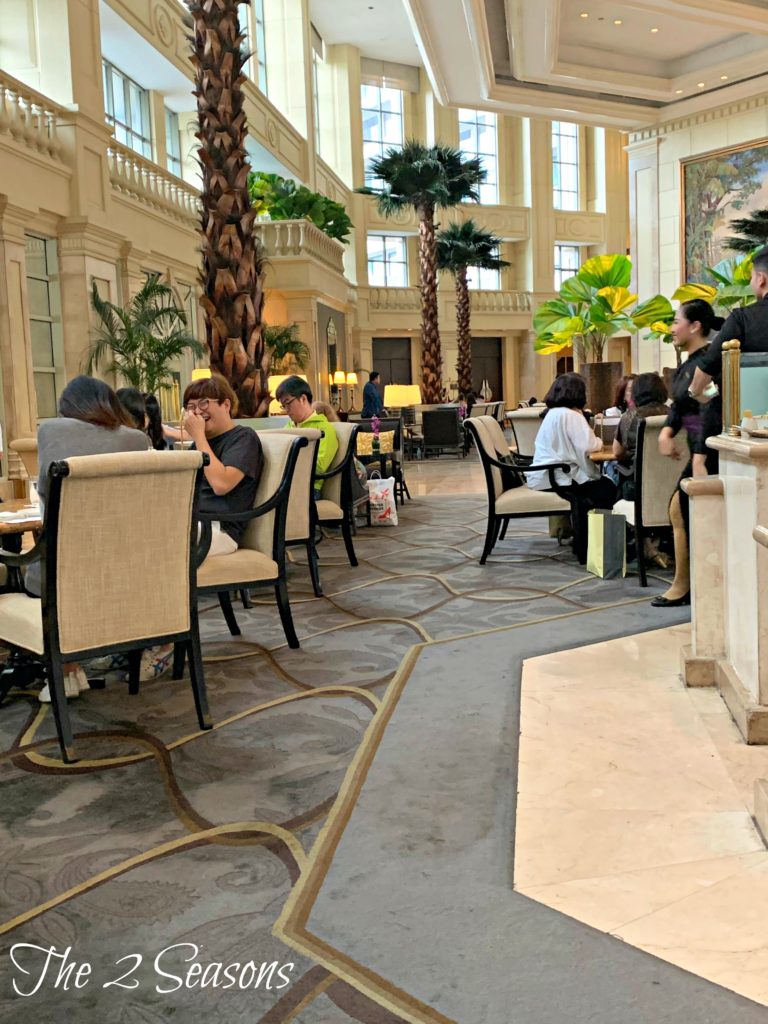 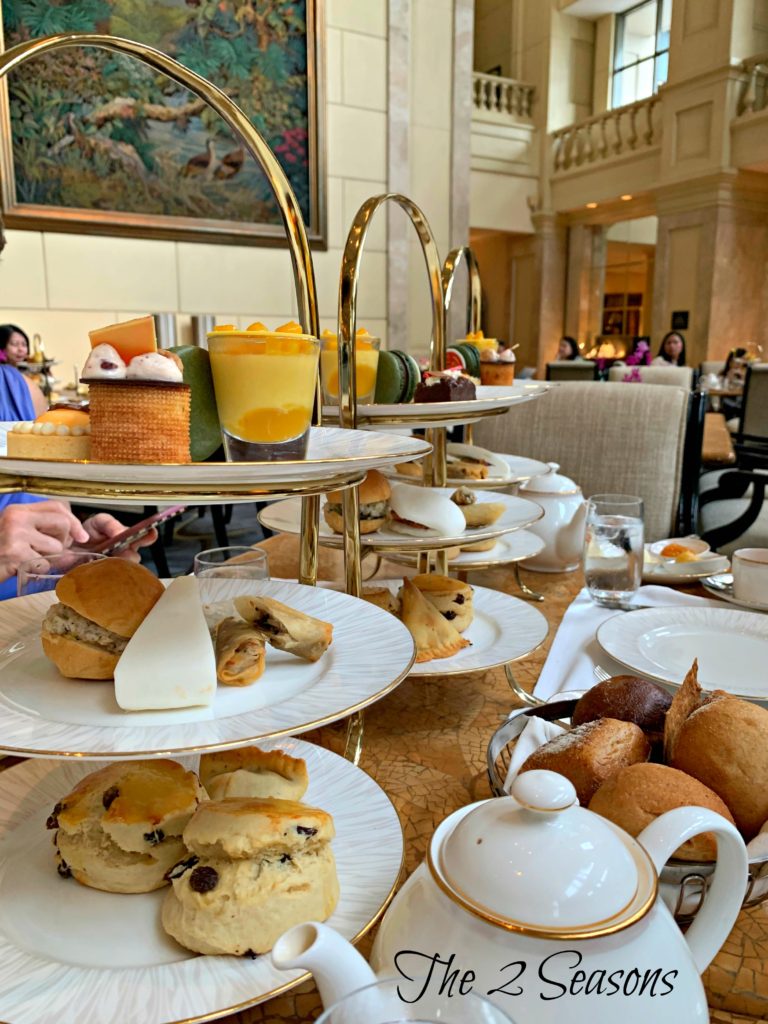 The service was excellent; the live music was soothing; the food was delicious; and the tea was perfection. Having afternoon tea and also bicycling are two of my absolute favorite things to do, so doing both on the same day was pure paradise. 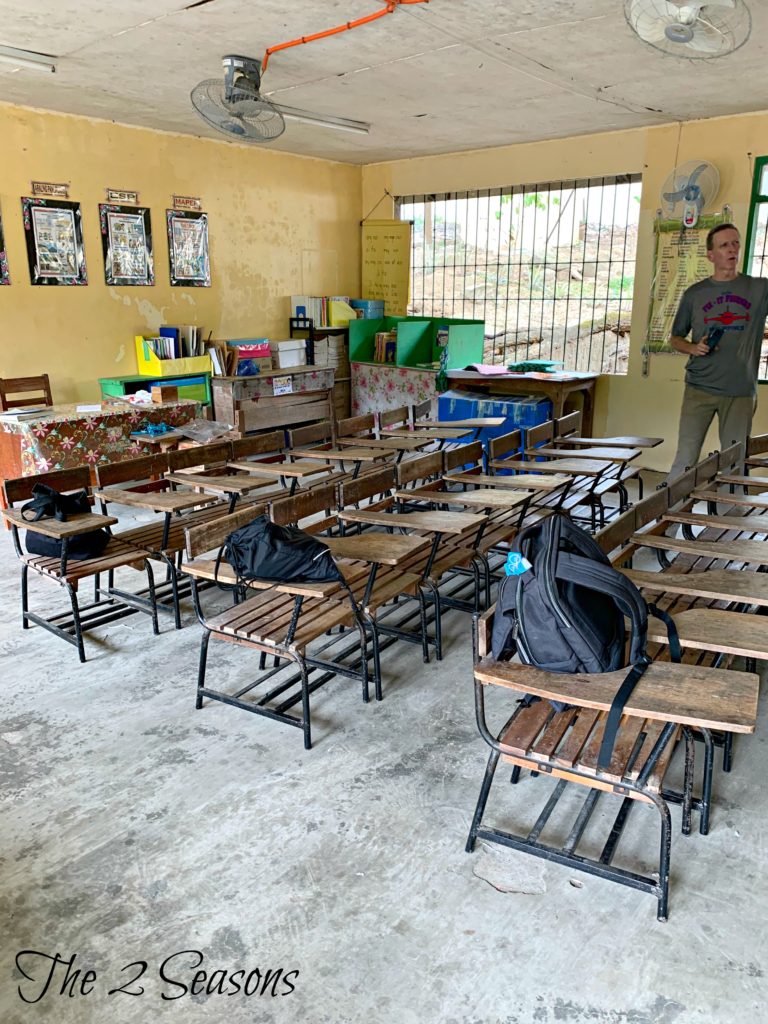 On Sunday we all loaded into vans and headed to Angeles City, which is about two hours outside of Manila. Angeles City also was a loud, crowded, dusty, and busy city. Our project was in a mountain village one hour outside of Angeles City. We hired a driver and commuted to the mountains each day. The mountain community had been affected by last April’s earthquake, and their needs were huge. You will be shocked when I show you their living conditions in part 2. 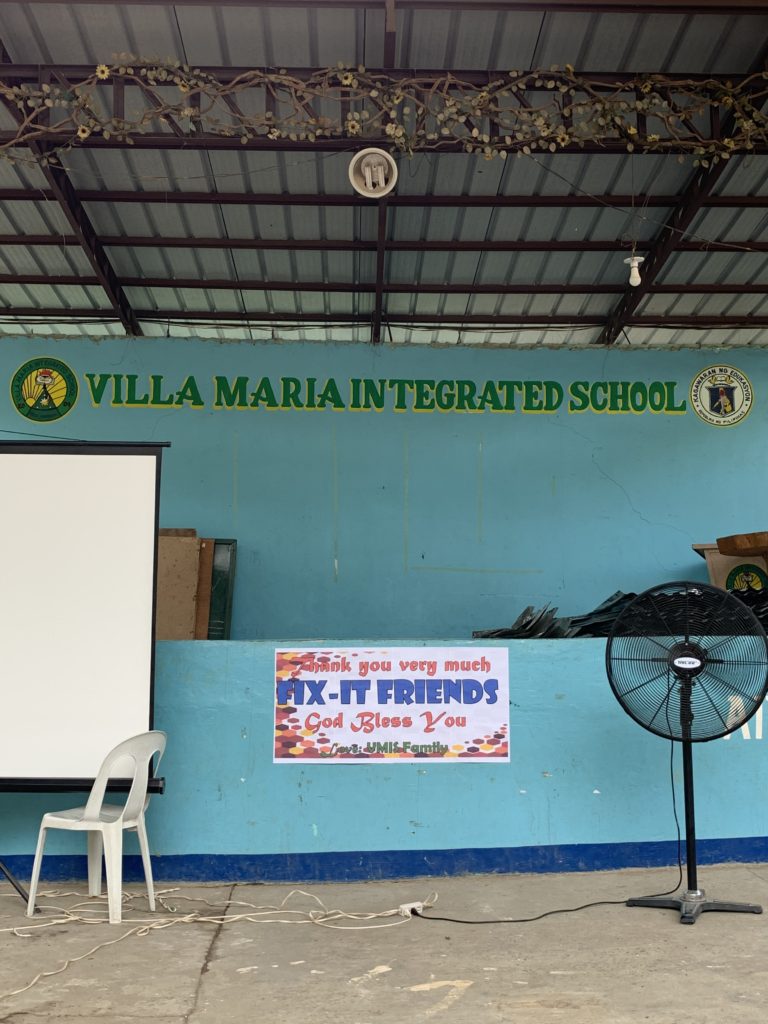 We spent our week working at the Villa Maria Intergrated School. In addition to that, we gave money for a simple house to be constructed, and when they send us photos of the finished house, we will send money for a second house. We always like to work with the local nuns each year when we organize these trips. They are well-respected in the community, are very organized, and know where the needs are.  They oversee the projects after we leave. 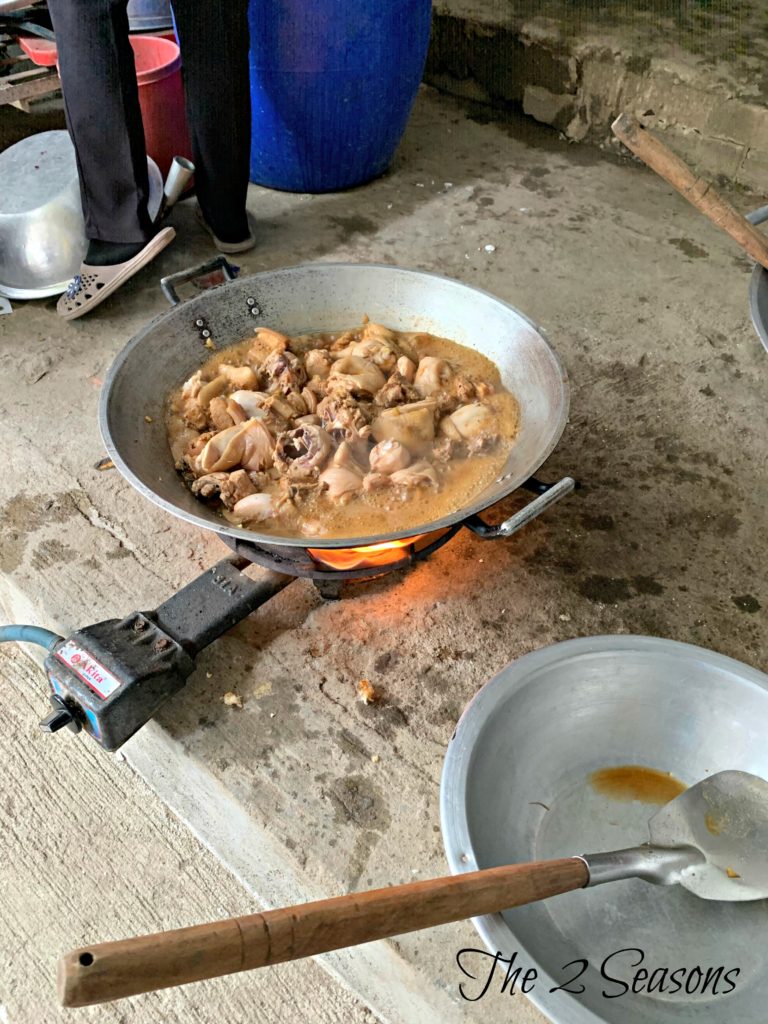 The school had over 500 children from elementary through high school. 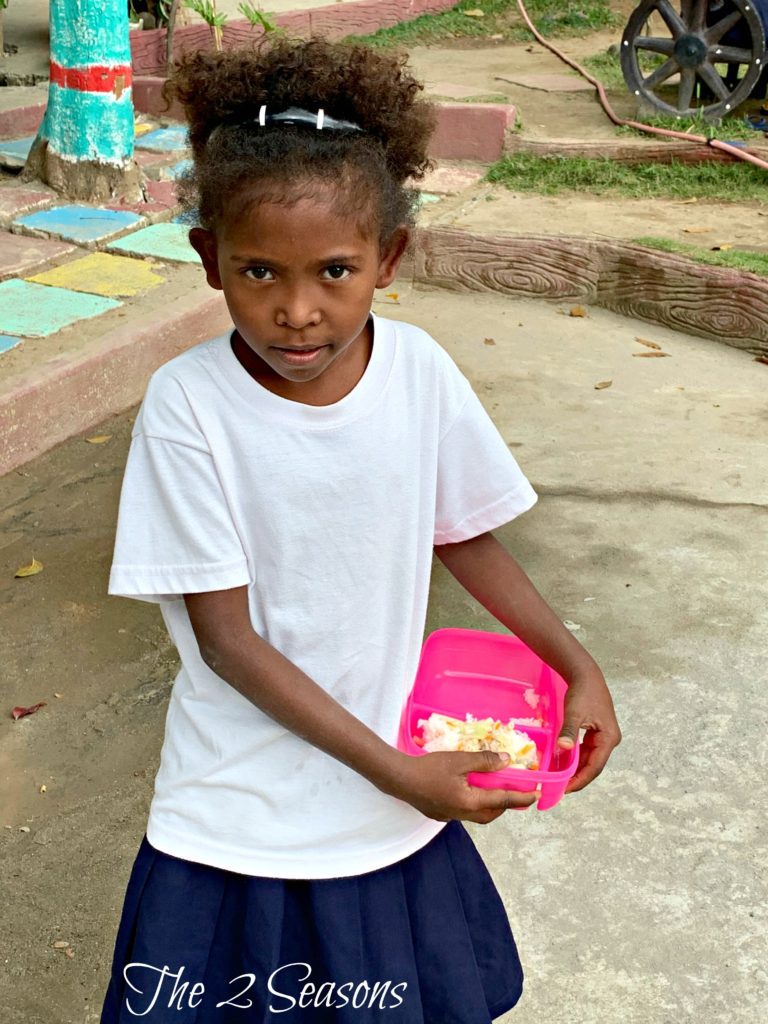 They could buy breakfast, snacks, and lunch at the school.  The children bring their own plates from home and eat with their fingers, which is the custom in their community. 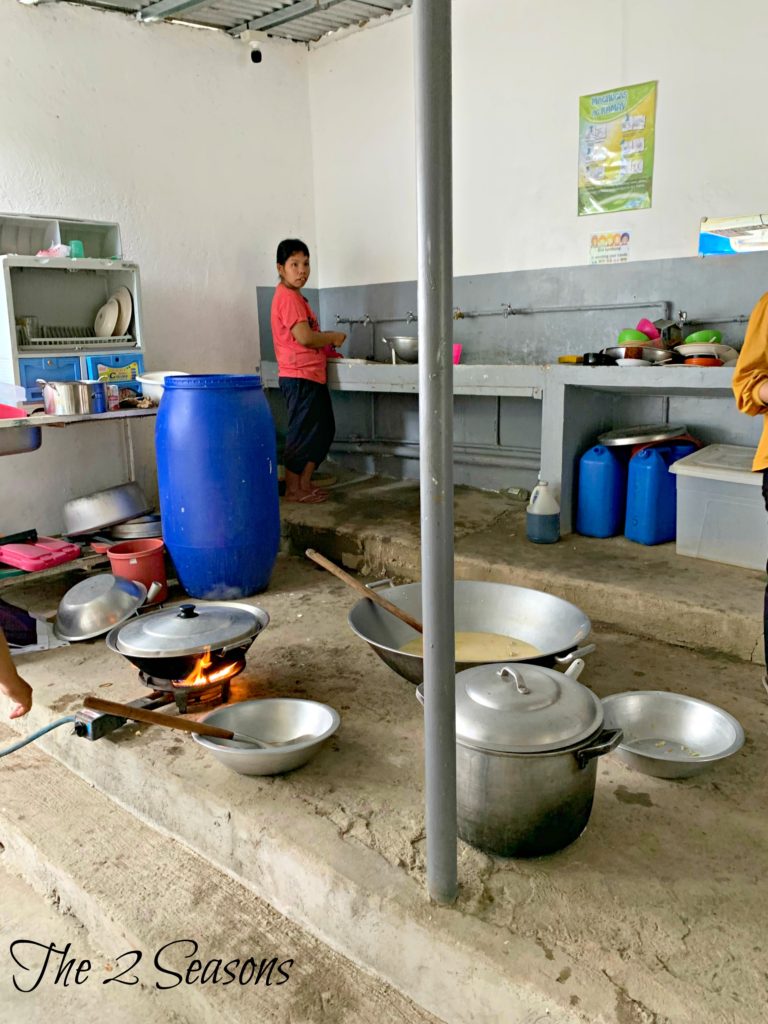 The teachers cooked the lunch during their planning periods. (Can you imagine this?)  This is the kitchen, and the food was really good. 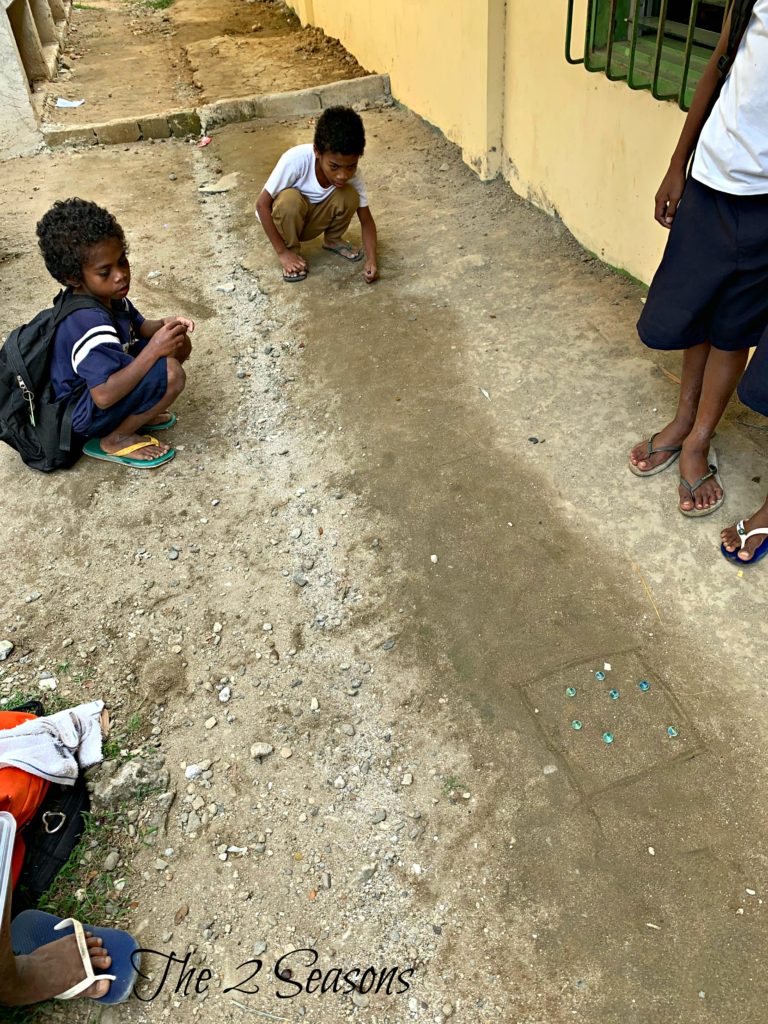 We were able to interact with the children as we worked there. Making contact with the locals is one of the reasons our trips are so successful and rewarding.  These sweet little boys were busy playing marbles during their recess.  Notice that they take their backpacks with them to lunch and recess so no one will steal them. 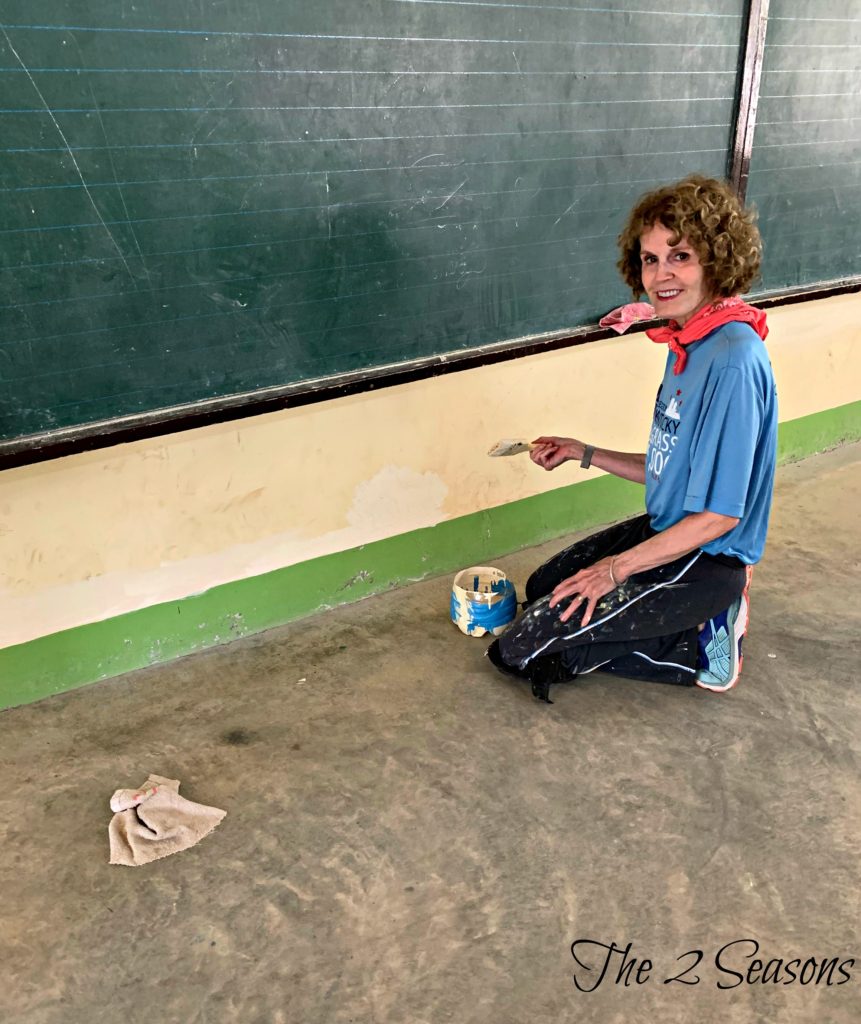 The school had many needs, and we were able to help them. We painted classrooms, painted railings, and deconstructed a temporary building that was erected after the earthquake.  A surprise playground that we purchased will go in its place.  We also bought basic school supplies and a copy machine for the teachers. 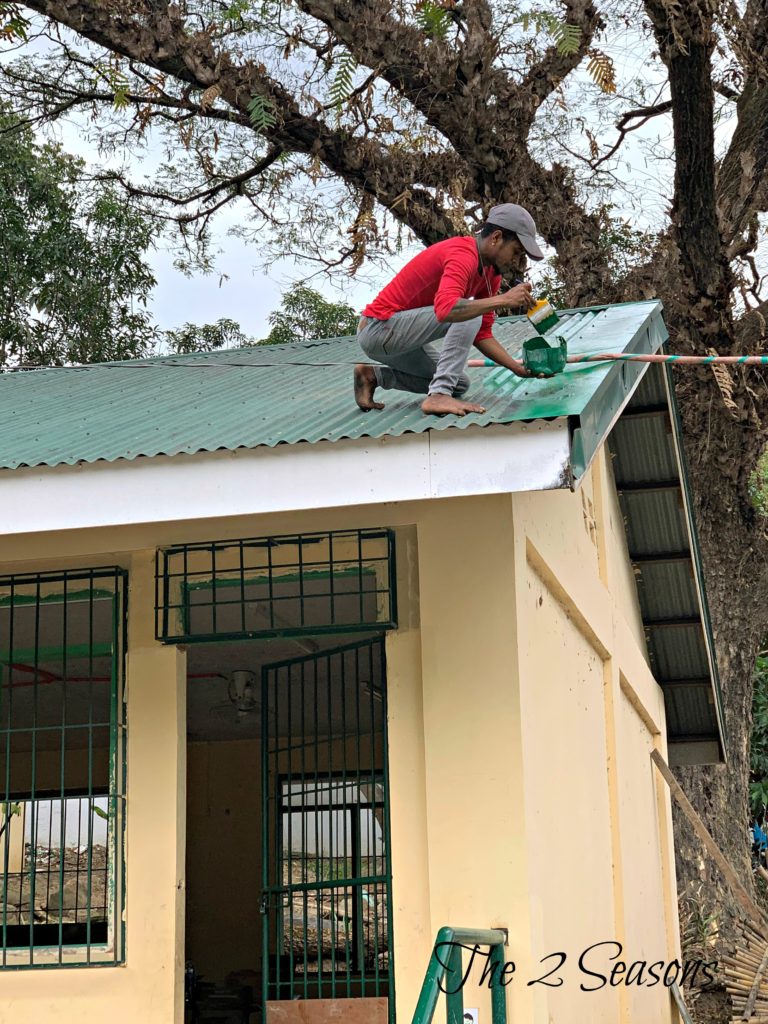 We hired local plumbers to repair all of the bathrooms (can you imagine having a school where the toilets and sinks don’t work?), hired local painters to paint the roofs, and hired craftmen to build sidewalks. We also purchased classroom equipment like chalk, which they needed. Plus, we bought basketball hoops and playground equipment I mentioned above. 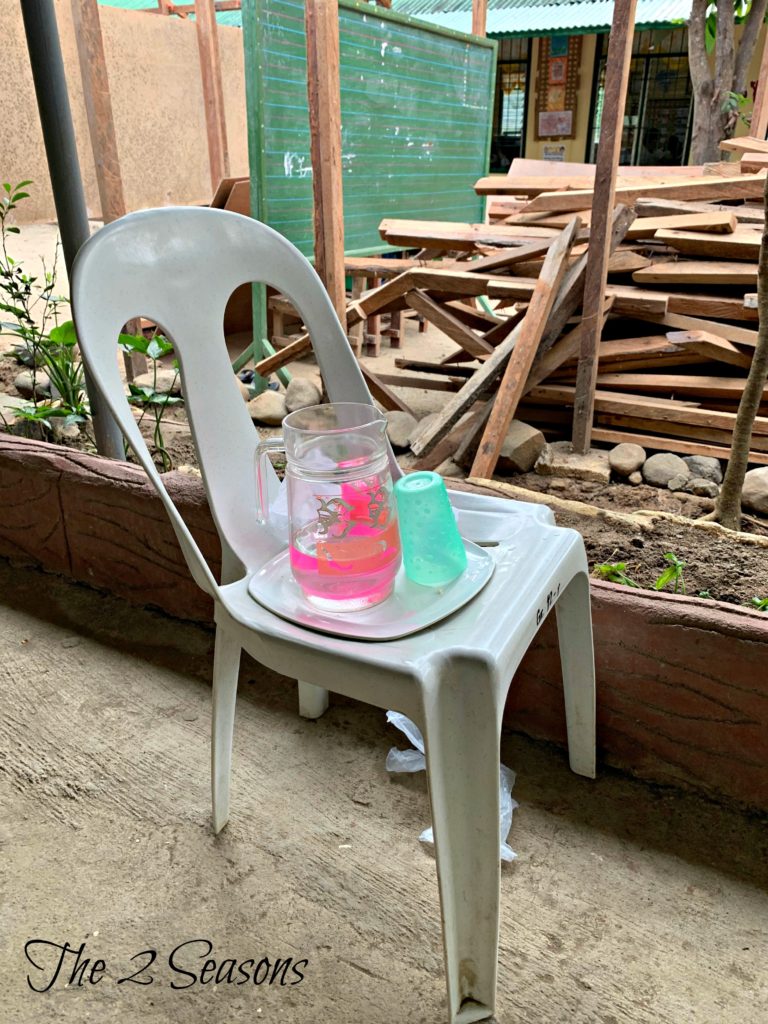 This pitcher and cups was the “water fountain.”  The debris in the background is from the building we took down.

We got to see everyday life in the mountains of the Philippines, and their struggle is real.  Be sure to come back next week to see the houses they are living in.

My Trip to Chicago

Our Trip to Philadelphia