Hello, everyone!  As most of you know, I was in Spain for over two weeks recently doing a long hike with my husband Mike.  Mike was away for six weeks and walked 500 miles from St. Jean Pied de Porte, France to Santiago de Compostela, Spain.  I joined him in Leon, Spain and walked the final 200 miles with him.  You have probably heard of the El Camino de Santiago.  It is a religious pilgrimage that has been going on for over a thousand years.  Traditionally, people started at their homes in Europe and walked to Santiago.  Mike and I did not actually do the hike as a religious pilgrimage, as most people don’t anymore.  We did it as a physical challenge that we wanted to tackle, and yes, it was indeed a challenge.  However, we both loved it and succeeded. 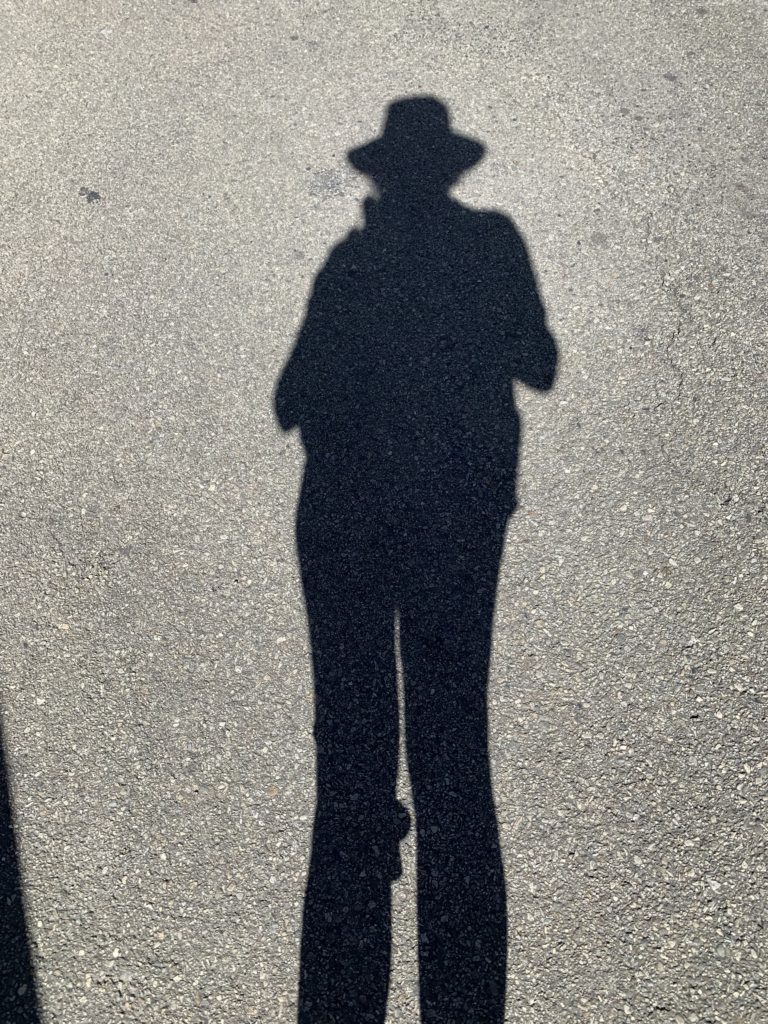 While I was hiking, I devoted our Instastories each day to answering questions that people asked about our trip.  So, I think that’s how I will approach the two blog posts I am writing.    Of course, I will include lots of photos to go along with the text.  Let’s get started.

What is the El Camino de Santiago? 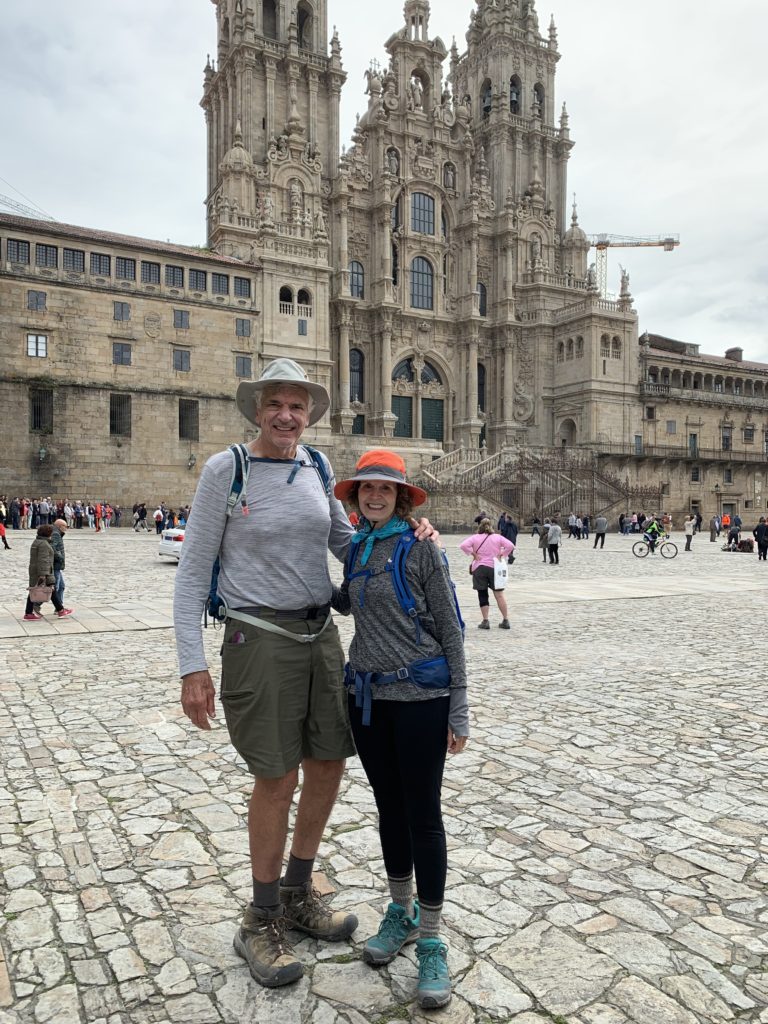 (Mike and I at the end with the cathedral in the background.)

Originally, it began as a religious pilgrimage in honor of St. James who brought Christianity to Spain.  Santiago translates to mean Saint James (it’s something to do with Latin).  In Santiago a cathedral was built in his honor, and the goal of the walk is to end up at the cathedral.  There is a movie starring Martin Sheen called “The Way“, and it’s about the pilgrimage.

Who does the walk? 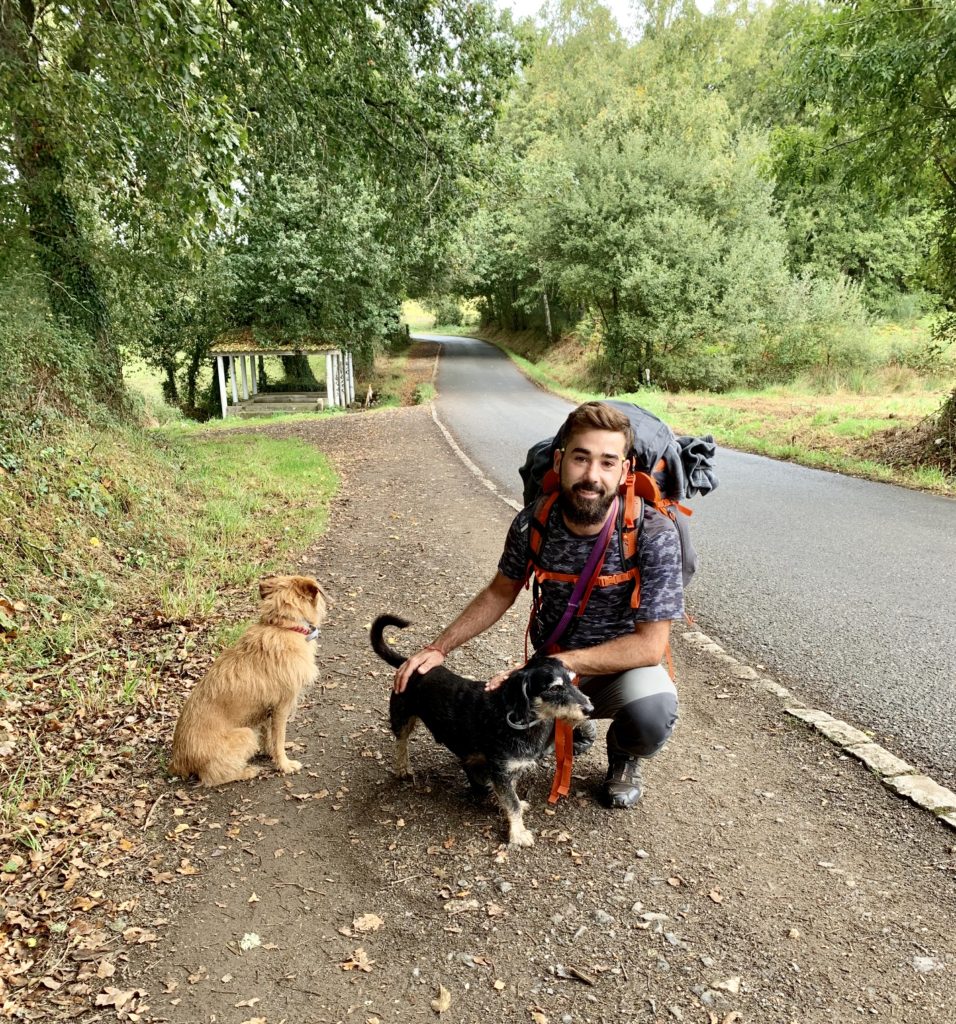 (This young man brought his two dogs with him.)

The short answer is anybody and everybody.  In the two weeks that I was on the trail, I spoke to people from 20 countries.  They were all ages ranging from early 20’s up into the 80’s.  It’s important to point out that they were each physically fit and up to the task of walking many miles each day, but they each did it at their own pace.

How much did we walk each day? 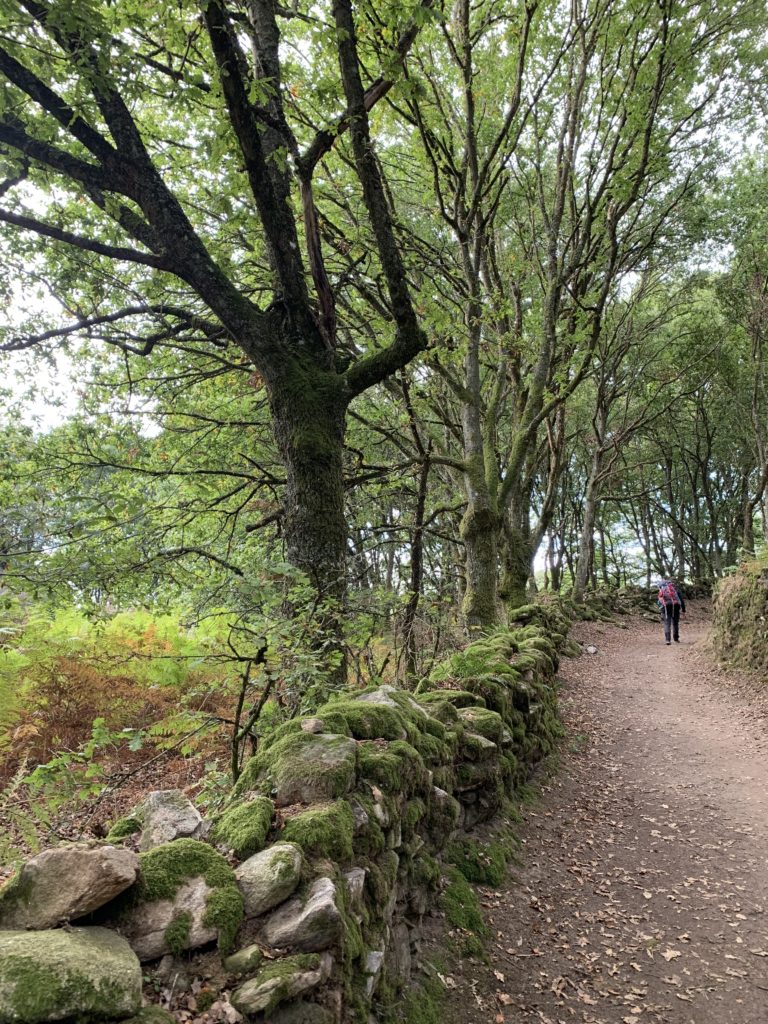 Mike and I averaged around 15 miles each day.  Our longest day (22 miles) was also our most mountainous day, and we agreed that we would have broken that day into two days if we had known how difficult it was going to be. We also had a 19 mile day that involved climbing lots of mountains.  Our shortest day was 12 miles. 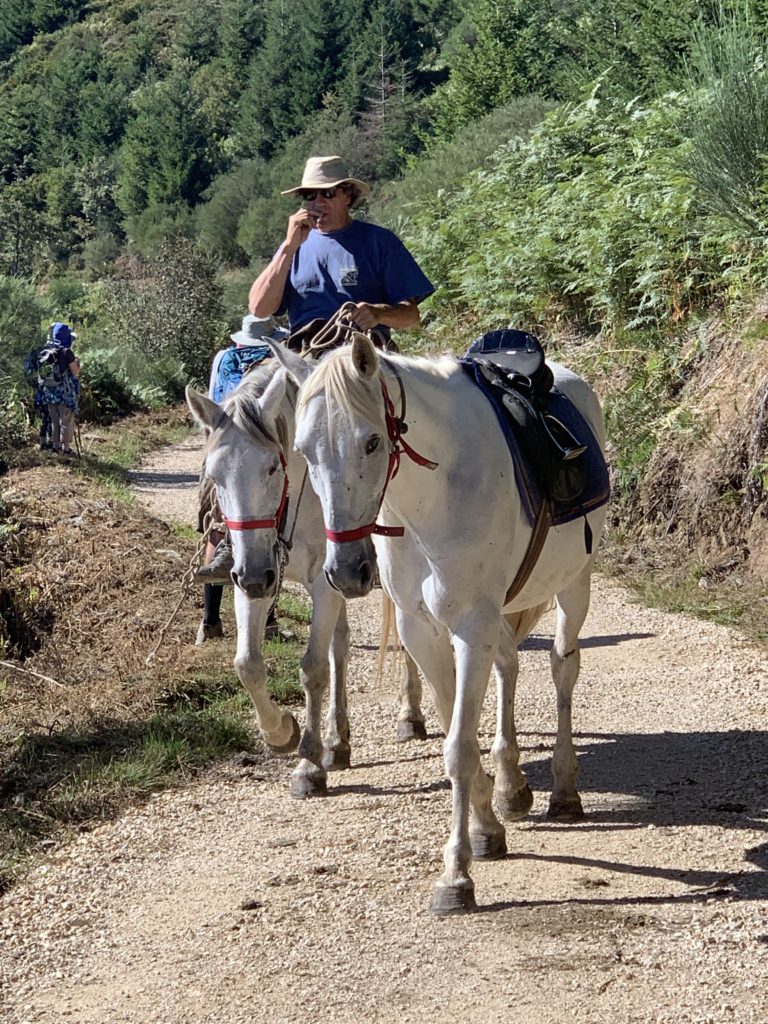 (We never knew what we would see on the trail.)

Spain is the second most mountainous country in Europe after Switzerland.  Mike was on flat land for a few days in the middle of his portion of the walk, but when I arrived we got back into the mountains on my second day.  The hike for Mike started at the foot of the Pyrenees mountains, and he climbed them and ended up in Spain that night.  He said it was the hardest day of his life.  This is coming from a man who has ridden his bicycle from the top to the bottom of Africa!

Where did we stay? 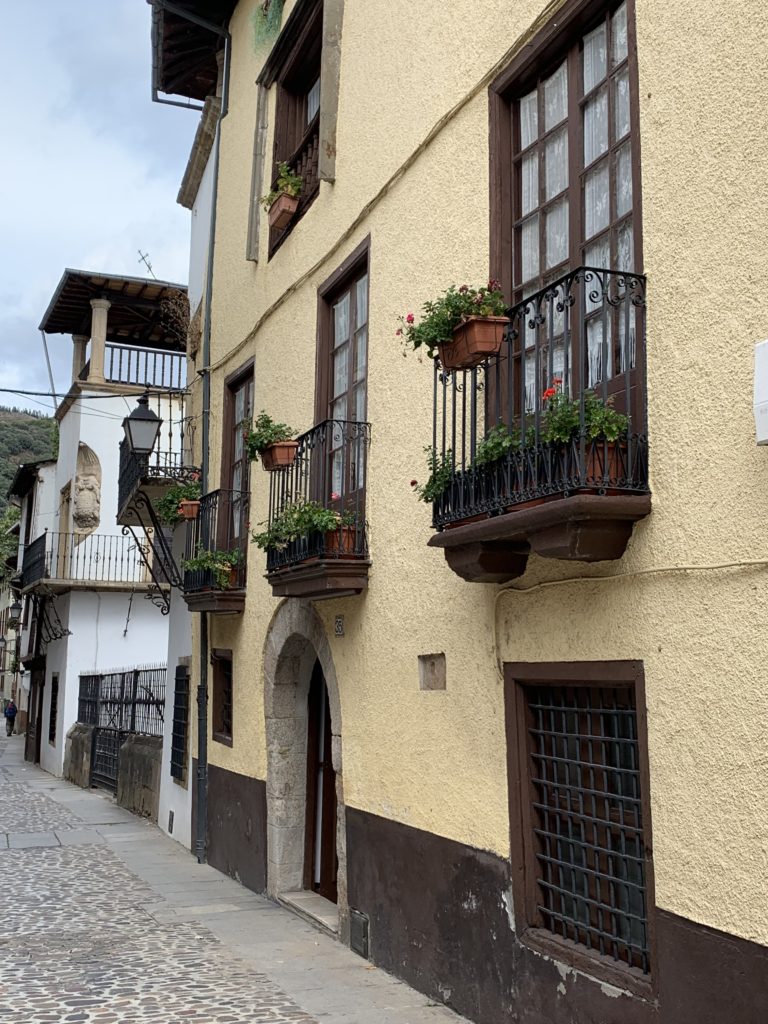 (We stayed in this inn one night.  The building was over 400 years old and was wonderfully restored.)

Basically, people who do the El Camino have two choices for lodging.  We chose to stay in hotels that were reserved in advance, and we had a service transport our luggage to our next hotel each day. 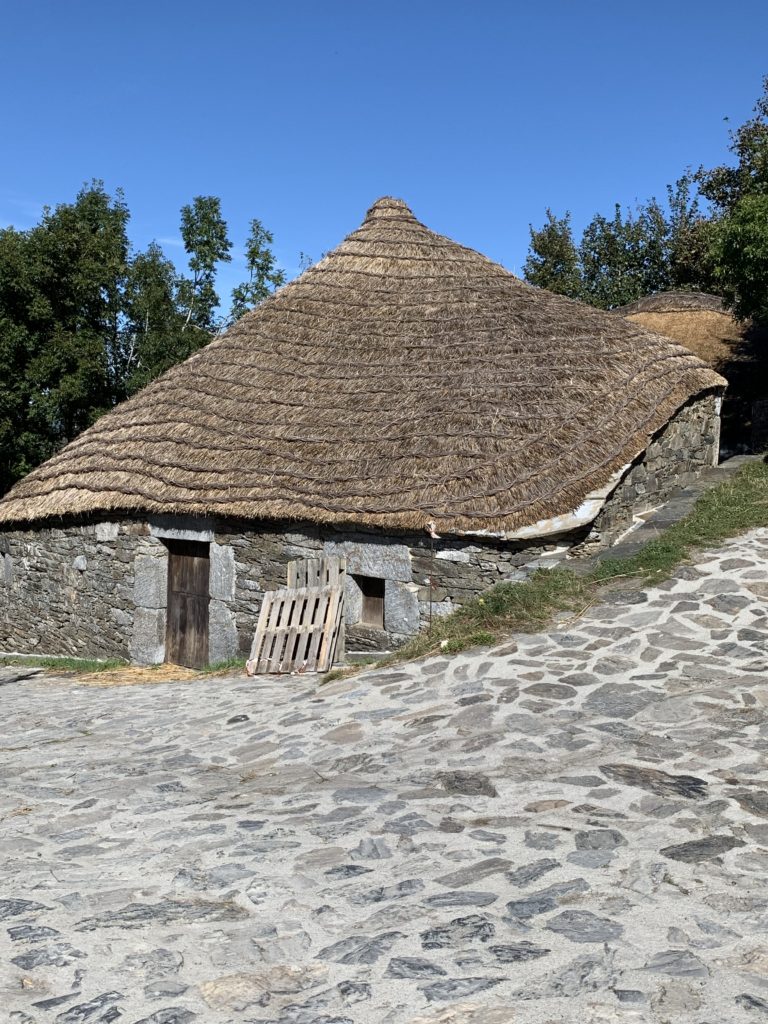 (Our room on another night was on the other side of this building with a breathtaking view.)

We only had to carry a day pack with rain gear and water.  We used a company called Camino Ways out of Ireland, and they booked everything for us and helped Mike determine which villages/cities we would stay in each night. 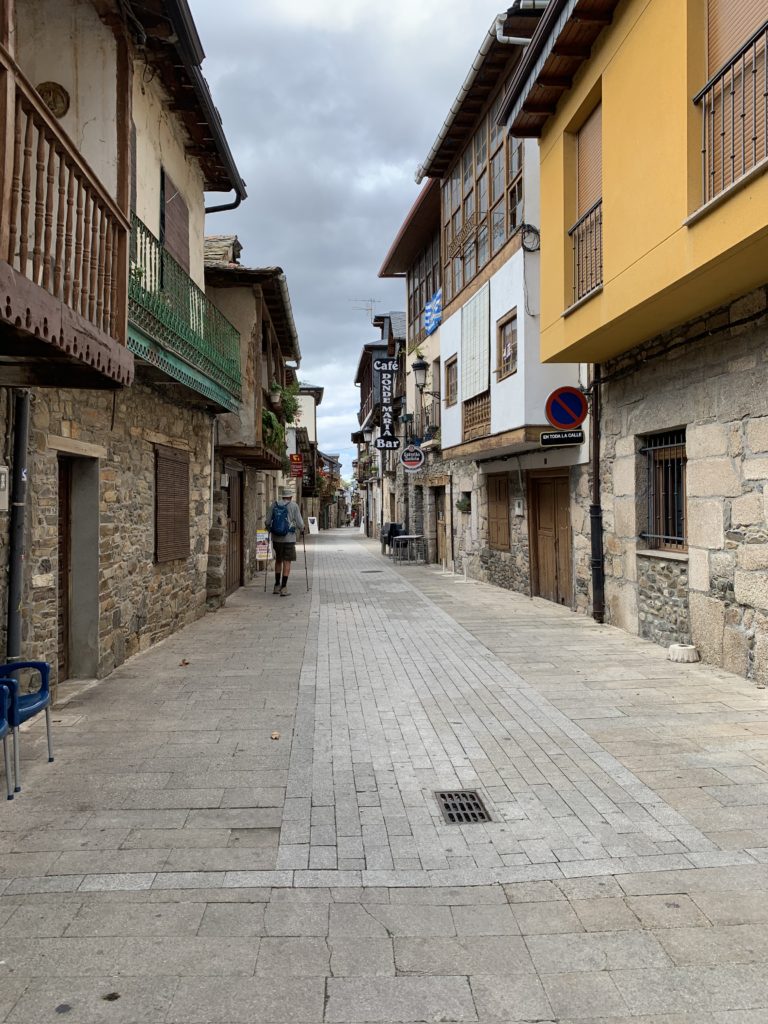 (We walked through many, many small villages like this one whose existence is dependent upon the Camino walkers and the money they spend.)

The second choice for lodging on the El Camino de Santiago is hostels.  People who stay in the hostels usually carry a back pack that contains all of their clothes and needs for the entire trip.  A few of the hostels can be booked that day for the evening, but most work on a first come/first serve basis.  If a pilgrim is planning to stay in a specific town or village and all of the hostels are full, then he has to continue on no matter how tired or how far he has walked.  We didn’t want to take that chance, and we knew that carrying all of our gear on our back would take away from our enjoyment.

Where did we eat? 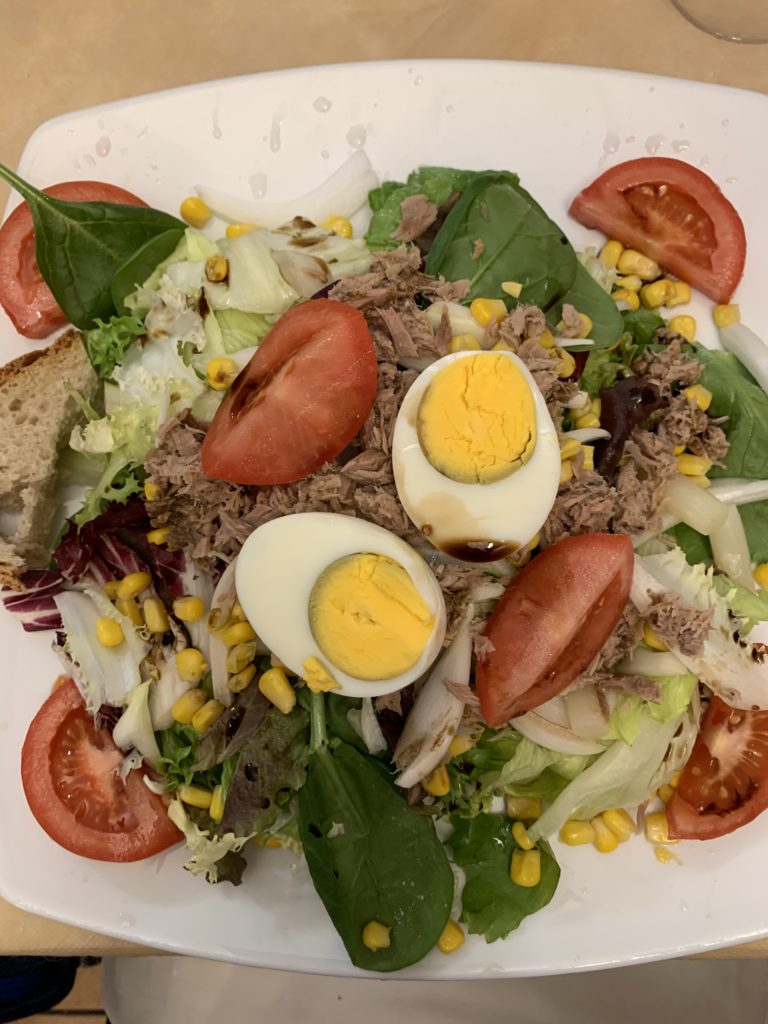 (This ensalada mixta, which was often a first course, was nutritious and filling.)

We had breakfast at our hotel each morning.  It usually consisted of a croissant and tea or a toasted roll.  Many days after breakfast we only had a piece of fruit as a snack until we had dinner that night at 7 or 8 pm.  (The typical dinner time in Spain is 9 pm.)  On other days, we stopped for lunch or a smoothie along the way. 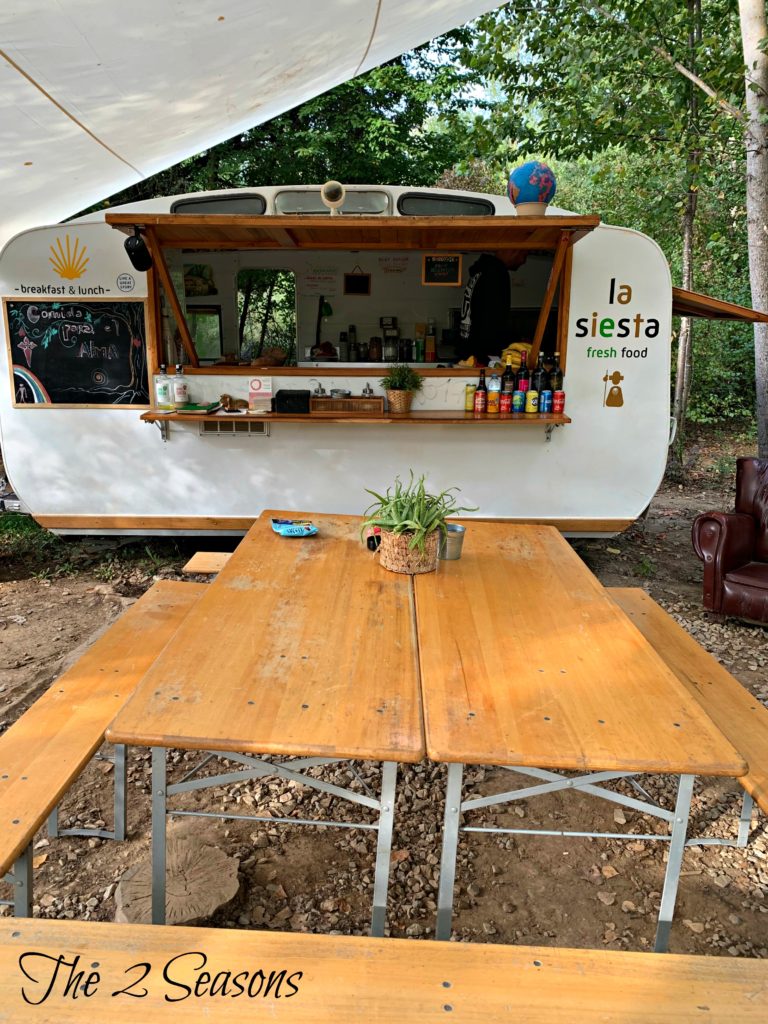 (This little trailer was nestled in the woods in the middle of nowhere and had excellent smoothies.)

There are mom and pop snack bars in the small villages that we walked through, and often there would be a snack bar in the middle of nowhere.  Many were run by farmer’s wives.  (We walked through lots and lots of farms.) Most dinner options were pilgrim meals, which were reasonably priced, hearty, and filling meals that consisted of a big appetizer (pasta, soup, or salad), an entree of meat, chicken or fish and potatoes, and a dessert.  Wine and water were always included in the pilgrim meal.

Next week we will have another El Camino de Santiago post to answer some more of the questions and to share more photos.  If you have a question about our trip, feel free to ask it in the comments.

My Hike on the El Camino de Santiago – Part 2

How to Make Peppermint Foot Cream