I am back today with a recap of another portion of our recent three week trip to Europe.  Our first week was spent in the Netherlands cycling through the beautiful tulips, and you can read about that here.  Once that trip was over, we hopped on a train (several trains, actually) and made our way to Baden Baden, Germany.  Why Baden Baden?  Well, my husband’s great grandfather was born in Baden Baden, and then immigrated to the United States.  Mike wanted to see where his grandfather was born, and try to figure out why he left. 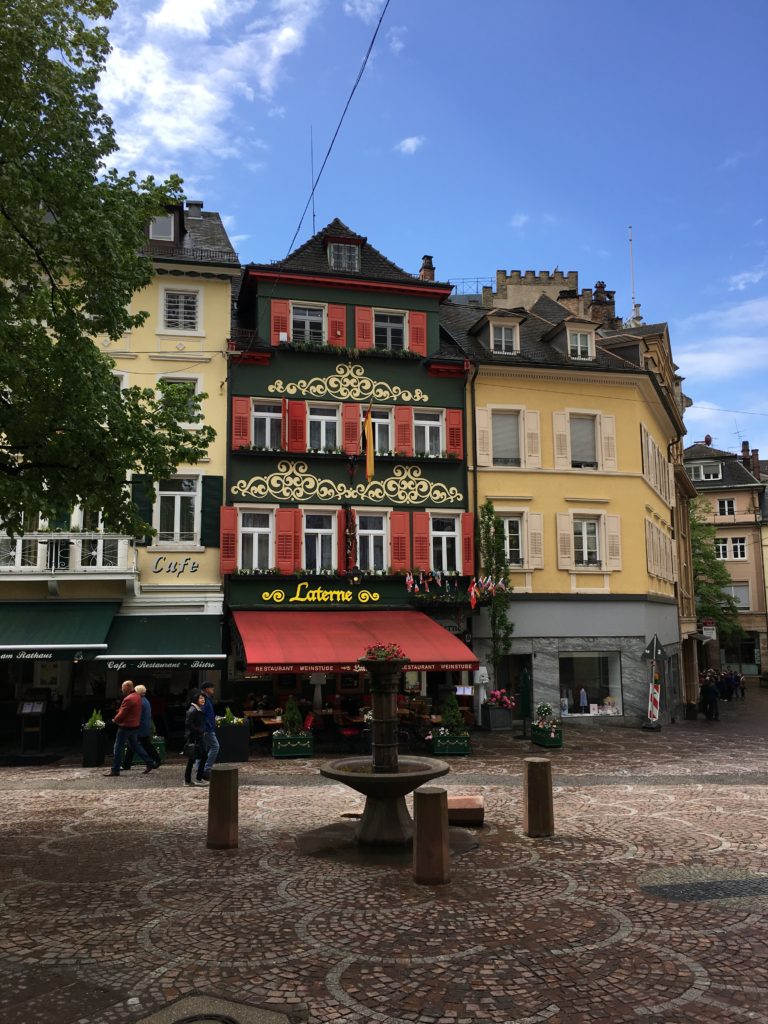 Baden Baden is located in the corner of Germany not far from Switzerland and/or France.  In fact, it is only six miles from the French border.  After a day on trains, we arrived there around 5 p.m. on a Saturday evening.  If you have done much traveling in Europe, then you know things pretty much shut down from late Saturday afternoon until Monday morning.  Thankfully, restaurants stay open. 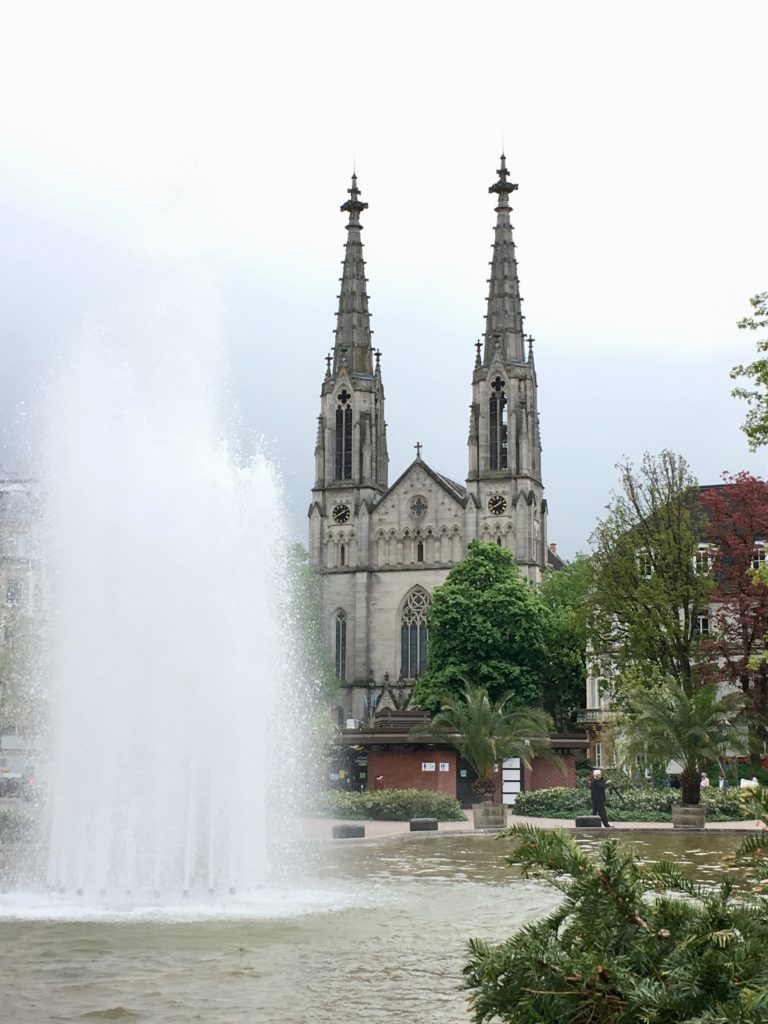 We took a bus to our hotel and decided to walk around and get a feel for the place.  After all, we were going to be there for about 36 hours, and there was no time to spare.  Sadly, it rained almost the whole time we were there, but it didn’t slow us down.  Our goal was to spend time in the city center, walk, go to church, eat some good food, and enjoy the scenery.  We discovered that this somewhat small town had all of the very upscale stores like Louis Vuitton, Chanel, Tiffany, etc. 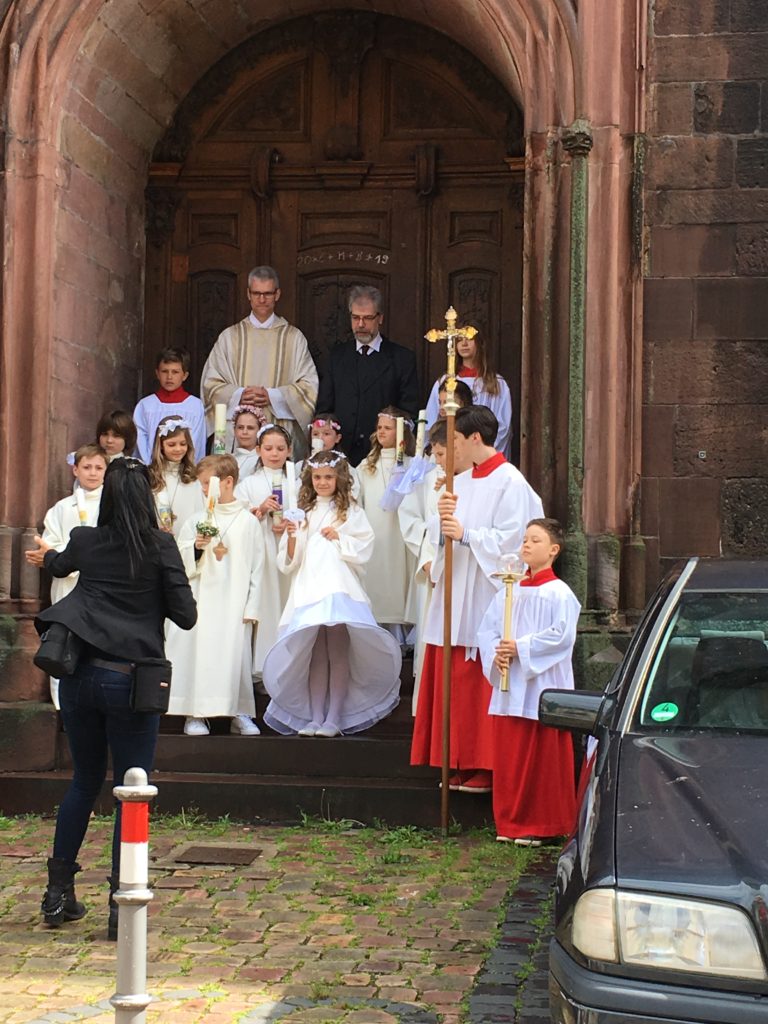 On Sunday morning we were lucky enough to be walking past a very old Catholic church at mass time, and we stopped in to go to church.  It happened to be first holy communion day, so that was fun. 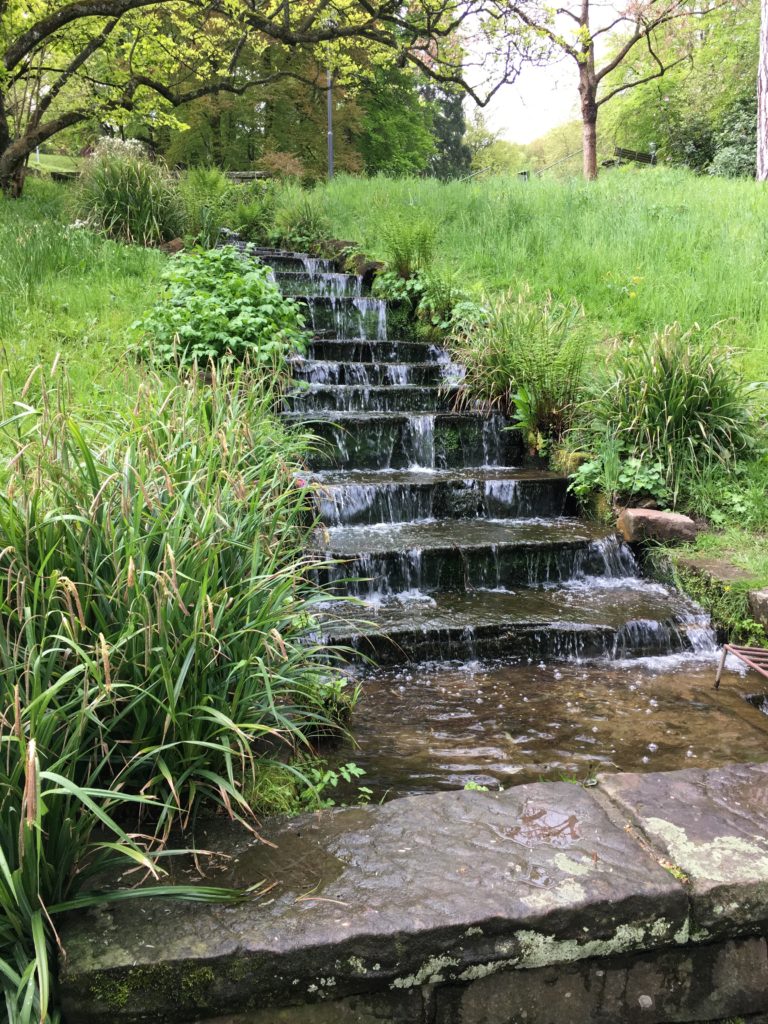 Baden Baden is popular with the Russians (the reason for the upscale stores) ,and restaurants had their menus in Russian and German.  There is a fancy and historic casino there that is the draw.  We stopped but couldn’t go beyond the lobby because you have to be dressed up (men in ties and jackets and ladies in dresses) in order to enter. 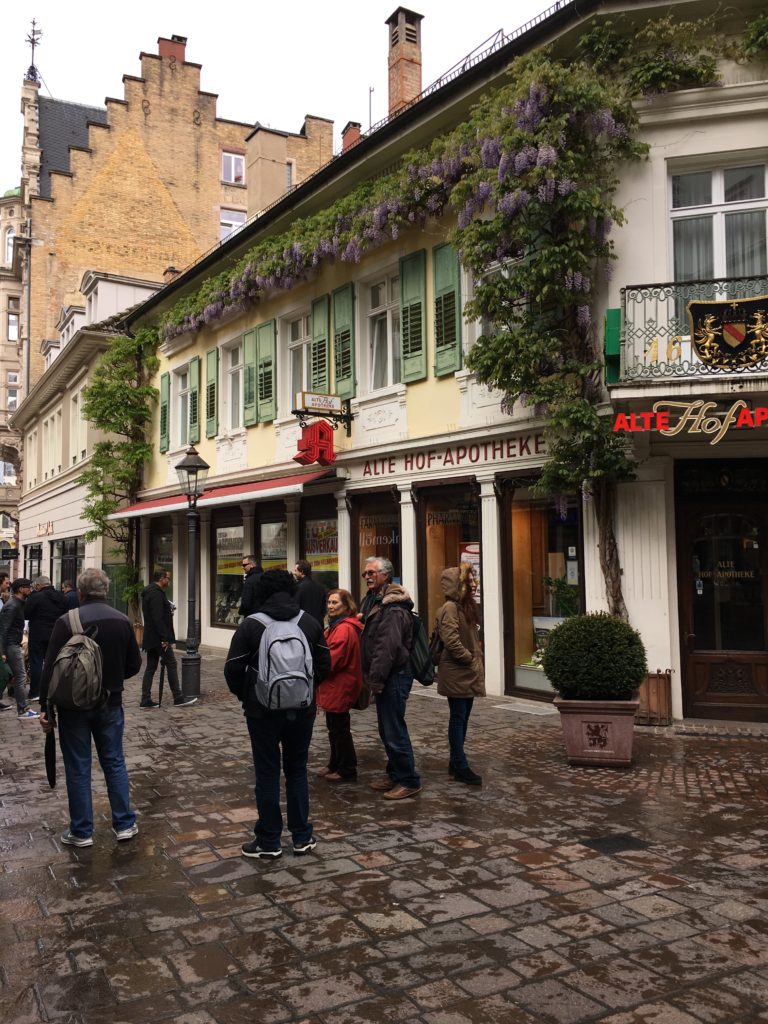 The flowers were in their infancy, and they were everywhere.  Wisteria was climbing around this building. 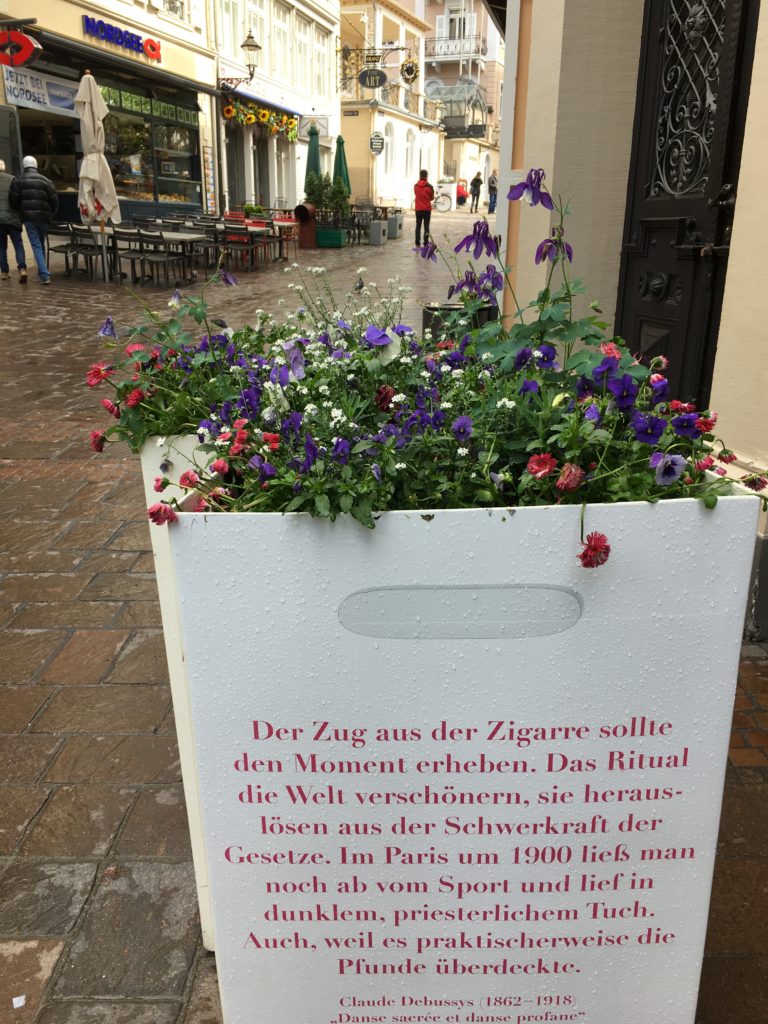 These concrete planters that looked like cardboard boxes were everywhere. 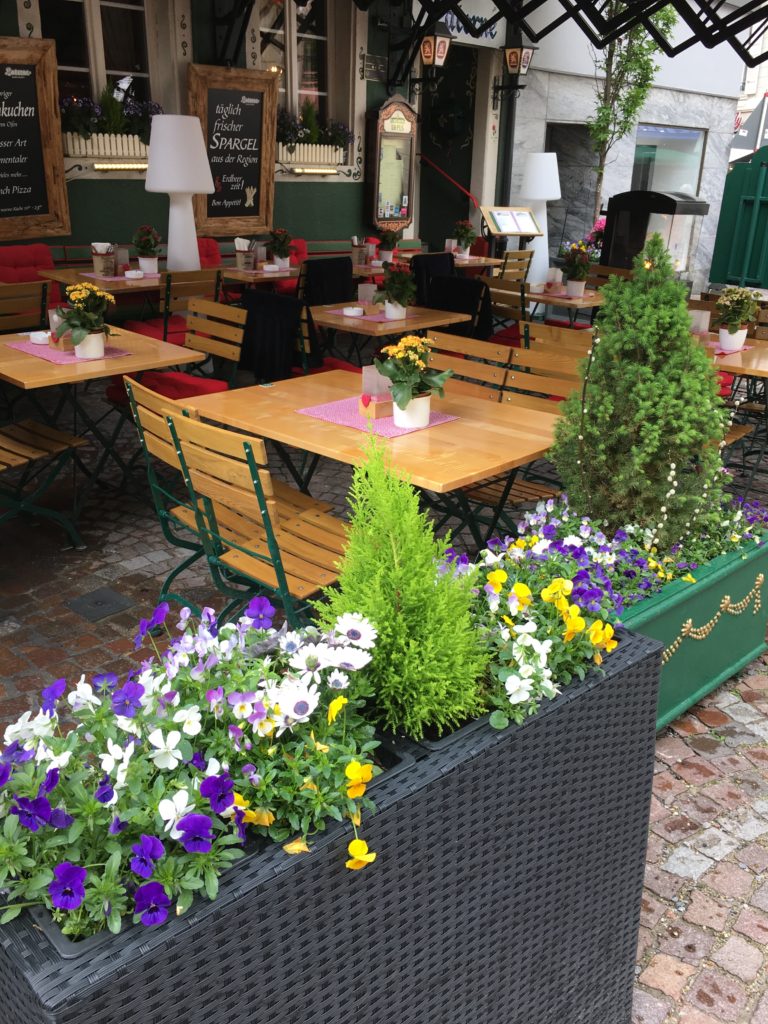 Plus, all of the restaurants and hotels did their own special plantings. 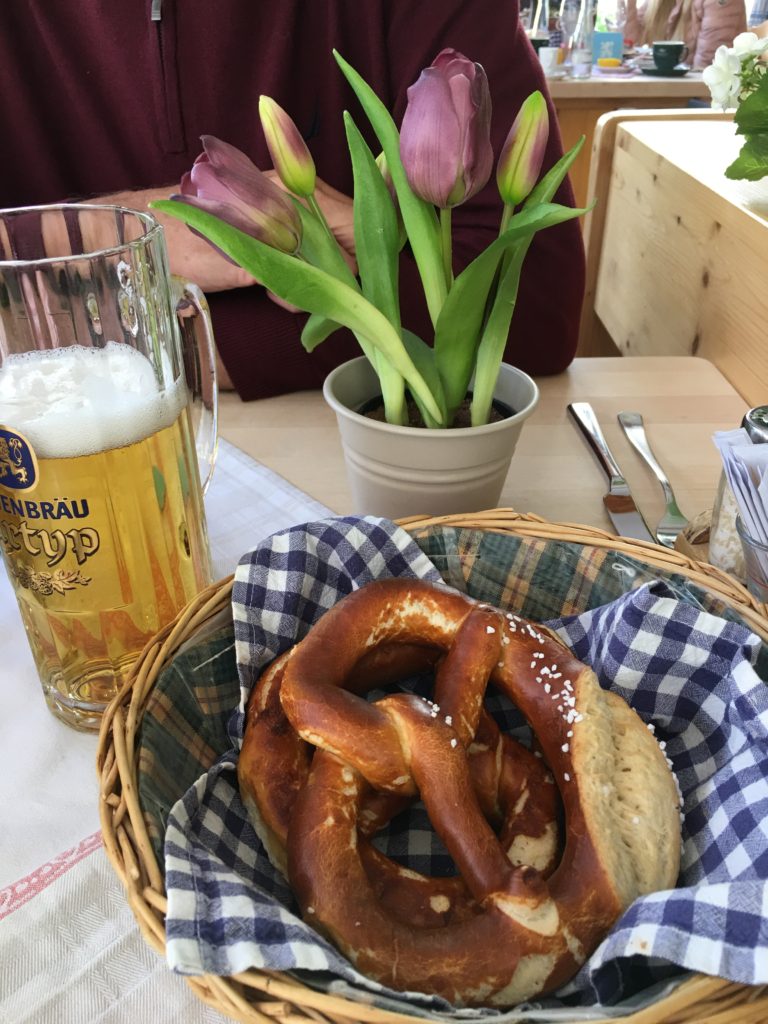 We ate some fine food but also had to find room for beer and pretzels.  We also enjoyed Black Forest cake since we were in the forest.  We had to carb up for our second week of bicycling which took us through four countries.  We will tell you about that next.

We LOVED Baden Baden and hope to return someday.  In fact, we are really falling for Germany.  We have visited many cities around the country in the past few years, and each one has a special quality.  If you get a chance to visit Baden Baden, I hope you enjoy it as much as we did.

My Trip to Europe