We have been back from our two week volunteer trip to Peru for a while now, and we thought it was time to share it with you.  Especially since both of us are about to head out again.  As always, there were 20 of us in our volunteer group, and this year we aged in range 4 to 94.  Everyone did his or her fair share.  The four year old, who happened to be Little Miss, worked her heart out as any four year old can.  The 94 year old, a retired Baptist minister and World War II vet couldn’t be held down either. 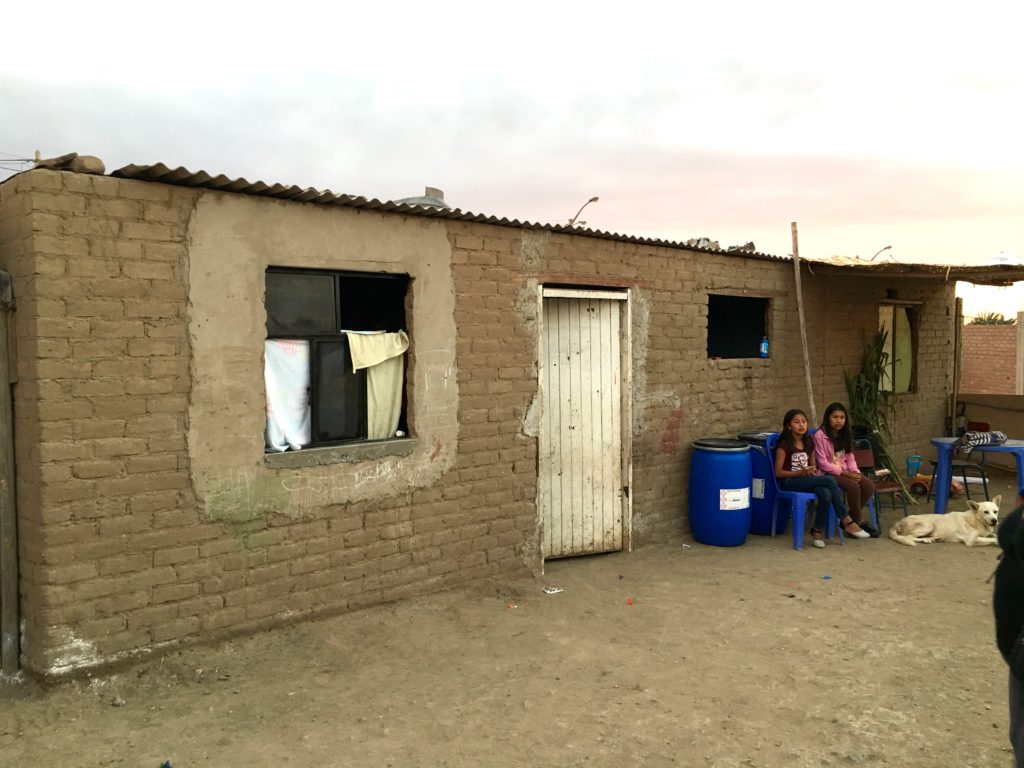 This year we worked in Trujillo, which is about an hour’s flight out of Lima.  It is on the ocean, but sort of looks like being on the moon.  There was not a lot of vegetation, trees, flowers, etc.  We divided our team into three groups, and we each had a different assignment in a different part of the city which has a little over one million people.  One group worked on building a house for a church’s caretaker; one group worked on building a soccer (football) field at the Catholic university. 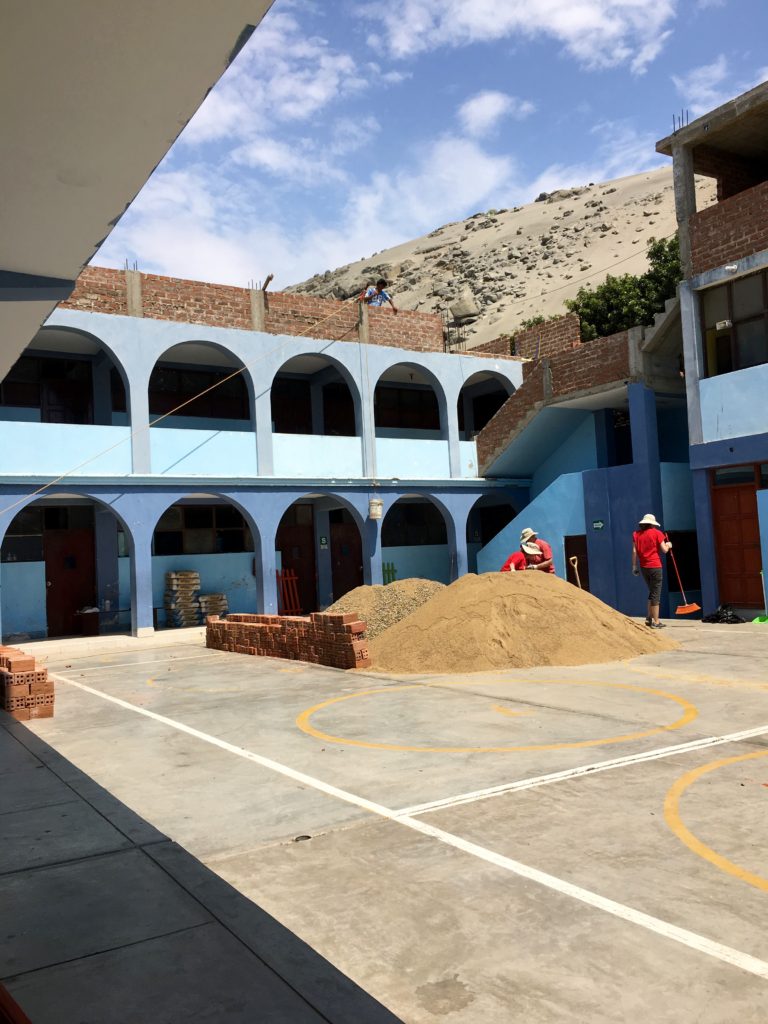 Our group worked on building the third floor of two schools.

Basically, Mom and I, along with the others in our group, did heavy manual labor for a week.  It was our job to get the supplies that we bought carried from the schools’ courtyards to their third floor. 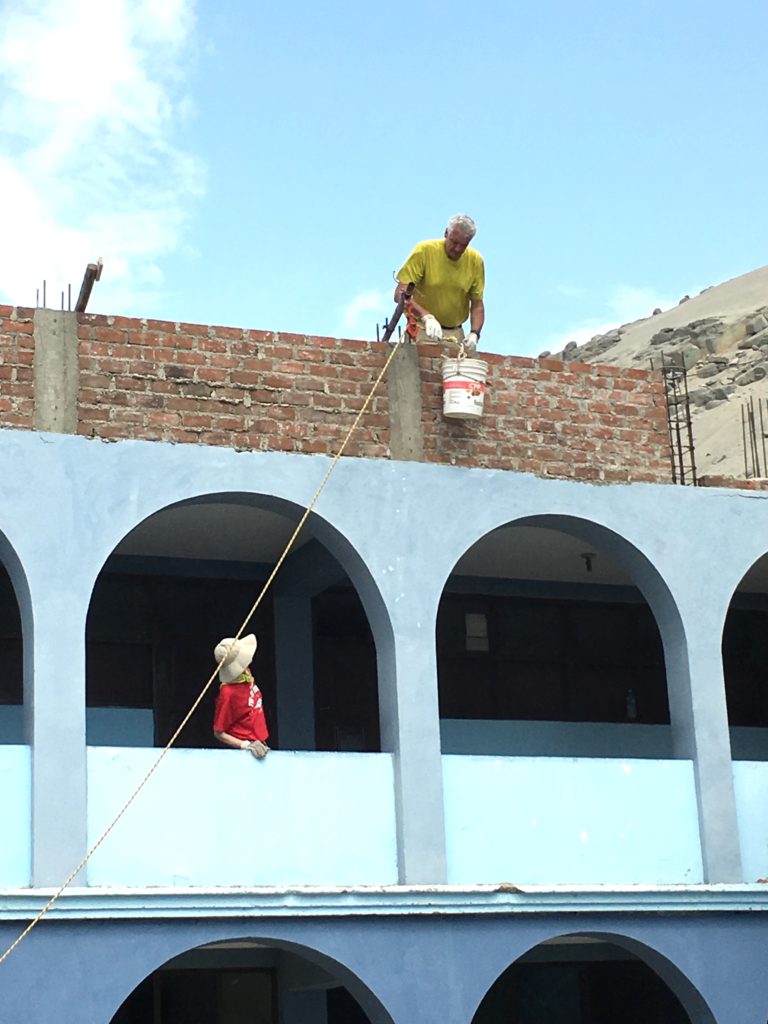 We loaded thousands of buckets full of stone, sand, and bricks and used a pulley that we rigged up to get them to the top.  Here Mom is on the second floor, and my dad is on the third floor.  She was guiding the bucket as it was being lifted on the pulley. 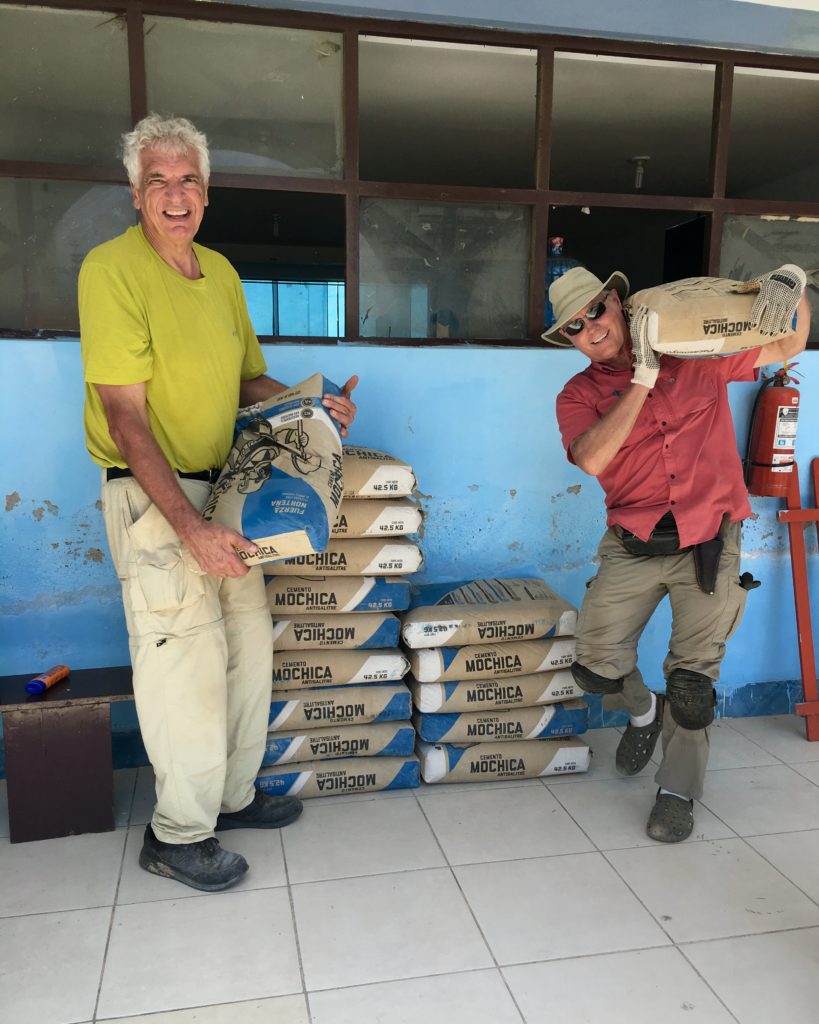 Those loads were heavy, and we were working in the hot sunshine, but it was wonderful.  We worked with some locals whom we hired, and it was a great way to spread good will.  Developing a relationship with the locals is almost as important as the work we do on these trips.  It helps them have a better view of Americans, and that is part of our goal.  Here my dad and Steve are carrying concrete mix. 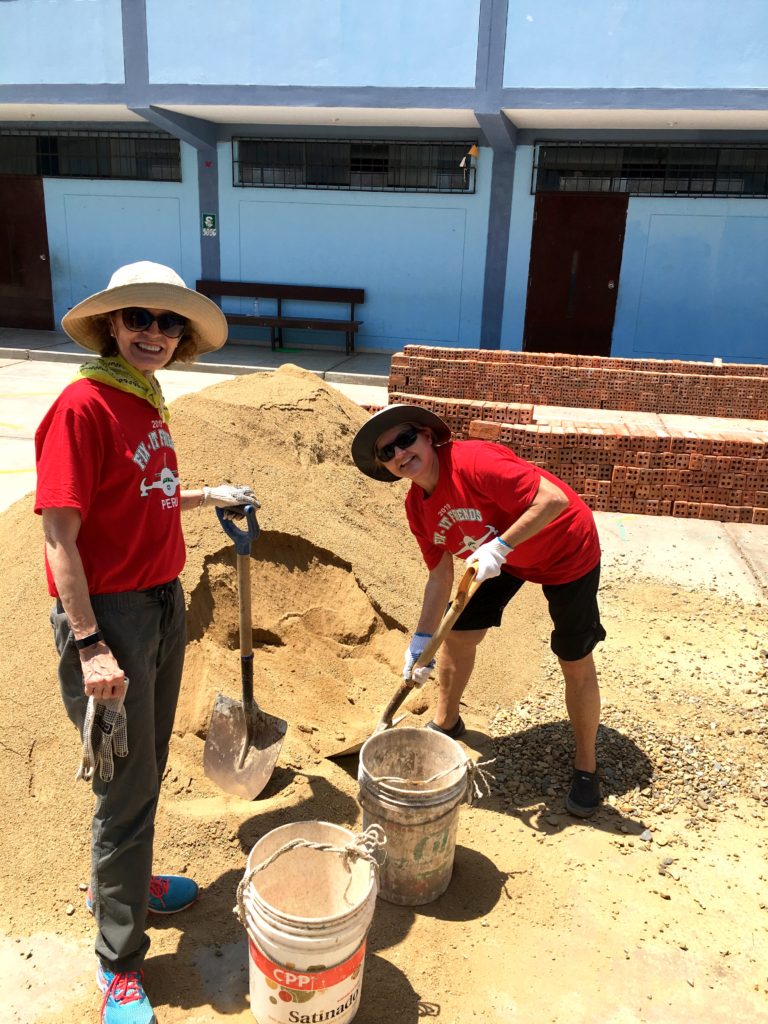 Debra Hupman, who is Mom’s kitchen designer, worked her tush off.  This is her and her husband Steve’s fifth year going with us. 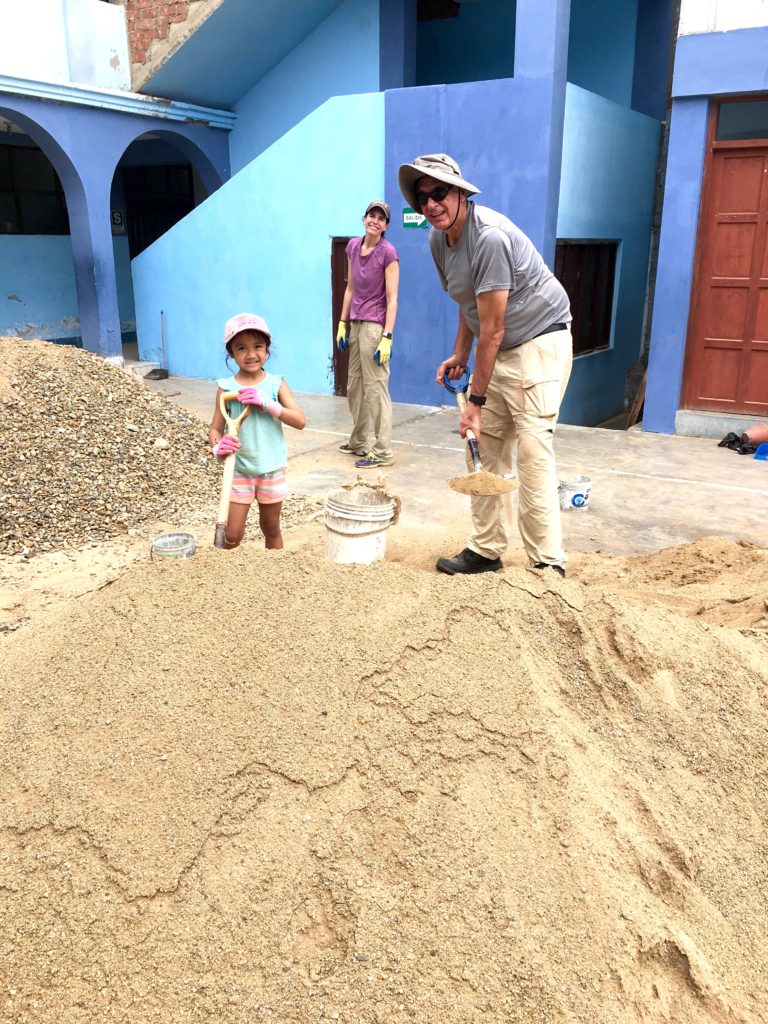 We were welcomed there with a festive gathering that involved music, dancing, singing, and food.  The areas of the town where we worked were poor but happy and content.  They need very little to be satisfied with their lives.  They have their families, their church, their friends, their music, their work, and their simple homes.  Their lives revolve around these things.  Everywhere we go in the world has one thing in common – everyone wants what is best for their children.  It’s as simple as that. 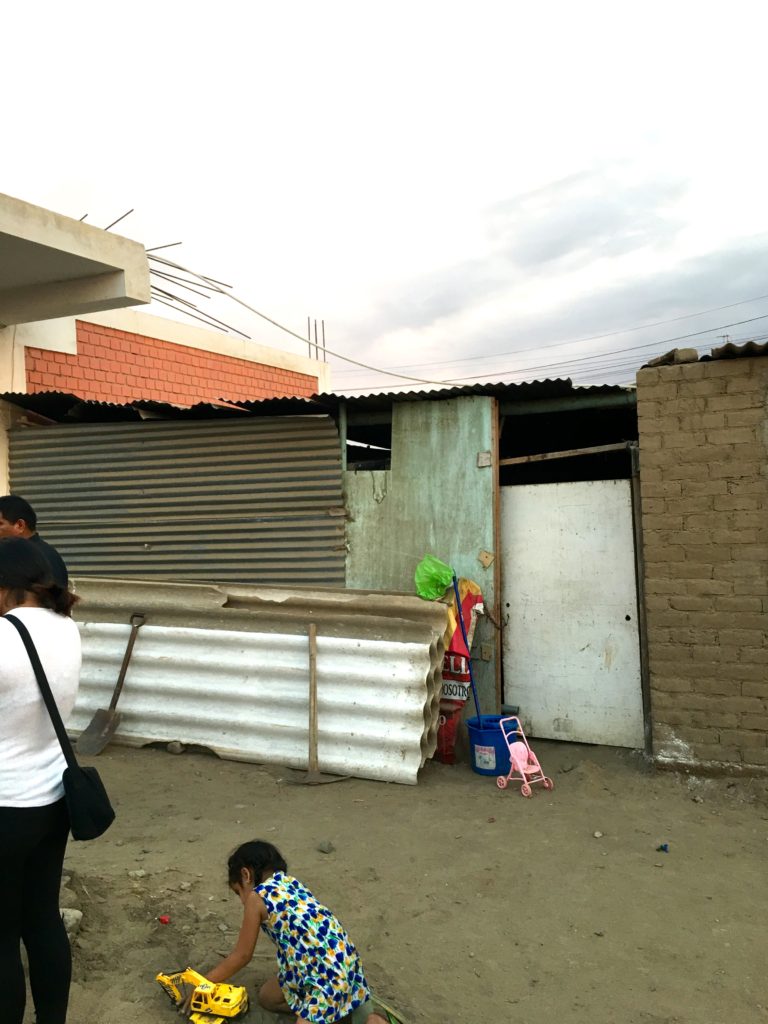 We were there for Valentine’s Day, and they celebrate with hearts, flowers, and candy just like we do.  We saw couples all dressed up to observe the day.

After our week in Trujillo, we flew back to Lima, which is at sea level, long enough to catch a plane to Cusco, which is 11,000 feet above sea level.  We spent a day there for our bodies to acclimate before going to Machu Picchu, one of the man-made wonders of the world.  We will tell you about out time there next week.

Our Trip to Machu Picchu