Here it is August, and we took a bicycling trip way back in May.  I haven’t taken the time to tell you about biking in the Netherlands  yet.  We did a two-week boat and bike trip in Europe on two different boats.  I wrote about our week of cycling in Provence here.  Now, I might get thrown out of Blogland for what I am about to say.  You know that I love France, but the Netherlands is my favorite country.  And here is the reason:  the small towns and villages are just so darned cute and charming, and I think they are prettier than the ones in France.  There……I said it.  We have bicycled all over both countries, including all the way from the English Channel through France to the Mediterranean Sea, and bicycling in the Netherlands wins.

Biking in the Netherlands

This trip began in Maastricht, which is the very southern part of the Netherlands almost in Belgium, and we ended up in Amsterdam. 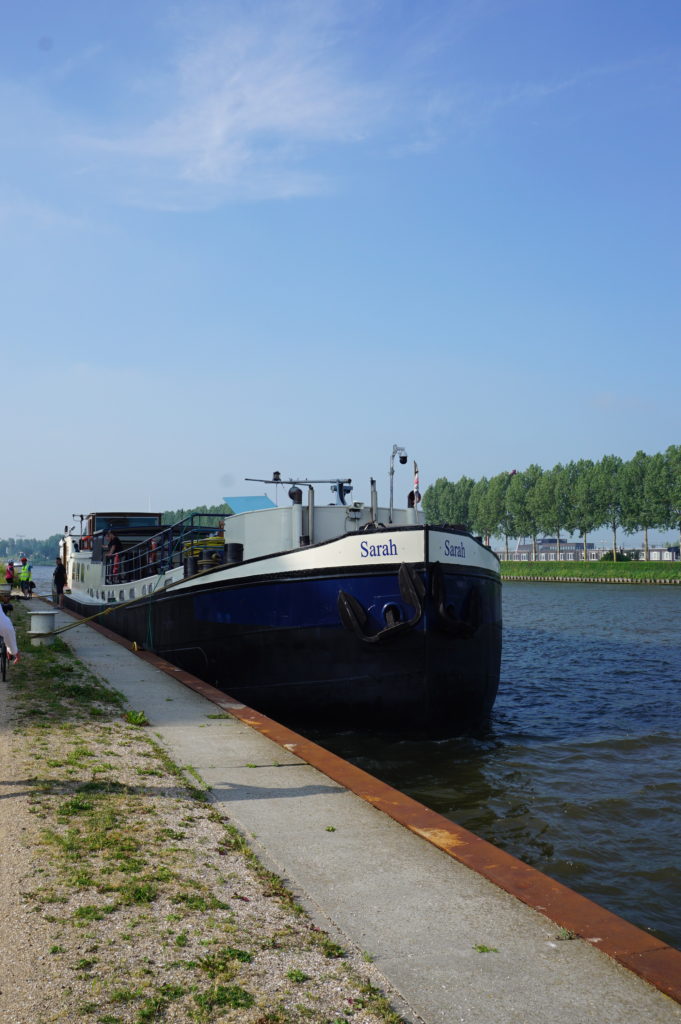 We cycled for six days and spent our nights on a small passenger boat that holds 20 people. Being on a boat with other cyclists is a great way to meet interesting people with common interests. 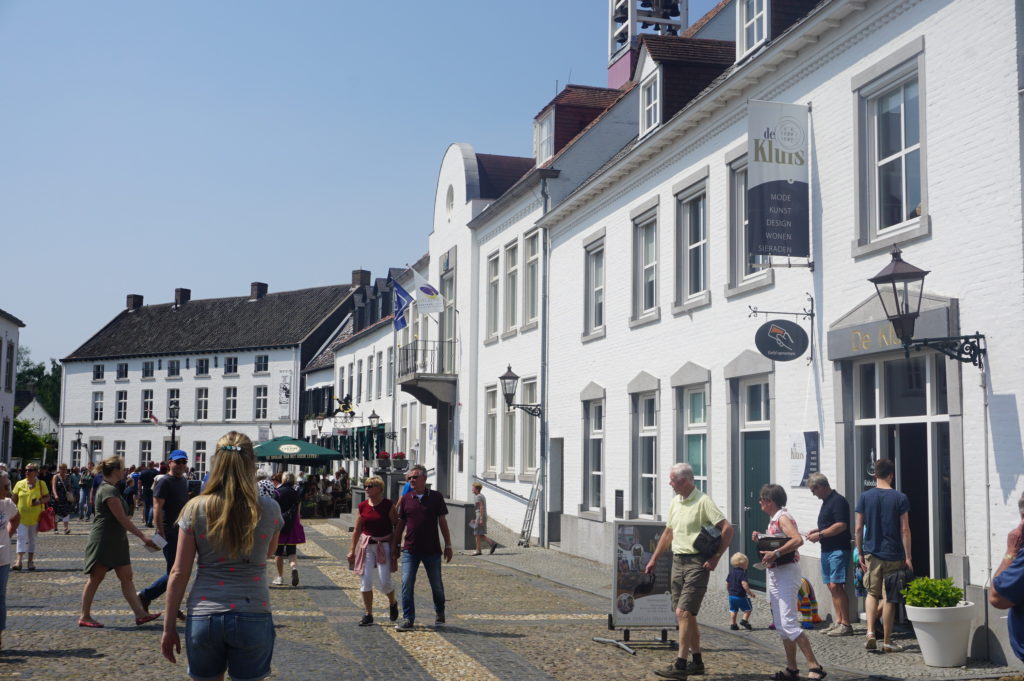 As we cycled along we stopped at interesting spots including this day of living statues in Thor. First of all, you would love Thor.  All of the buildings are painted white, and they are very old.  Most of them are brick painted white, which is even better. 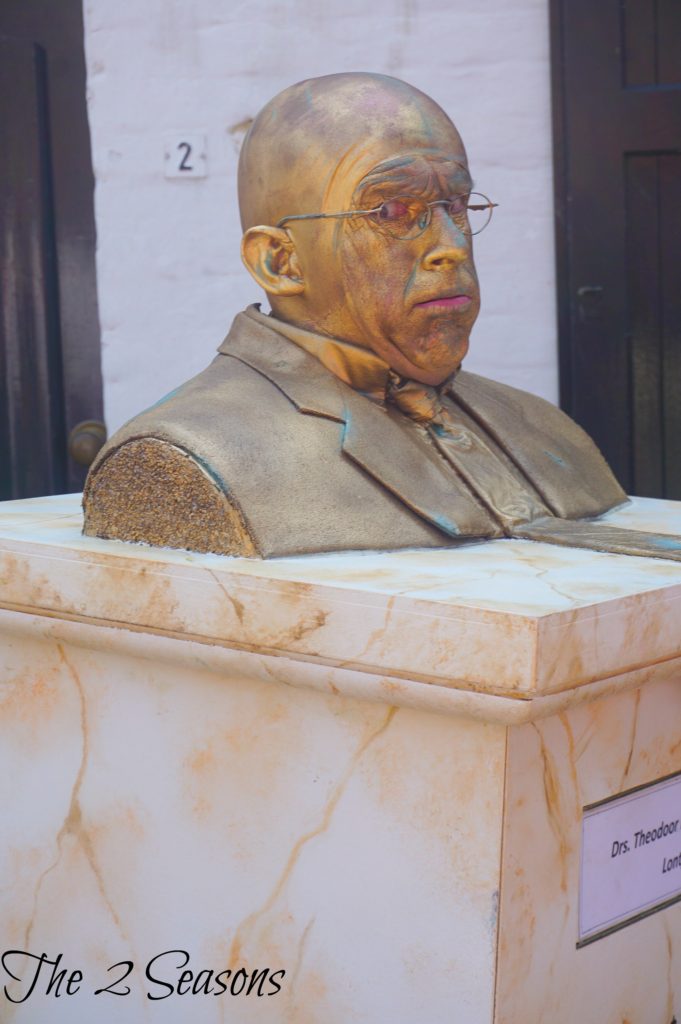 Throughout the village center on the day we were there were humans disguised as statues.  This man was a bust on a marble pediment. 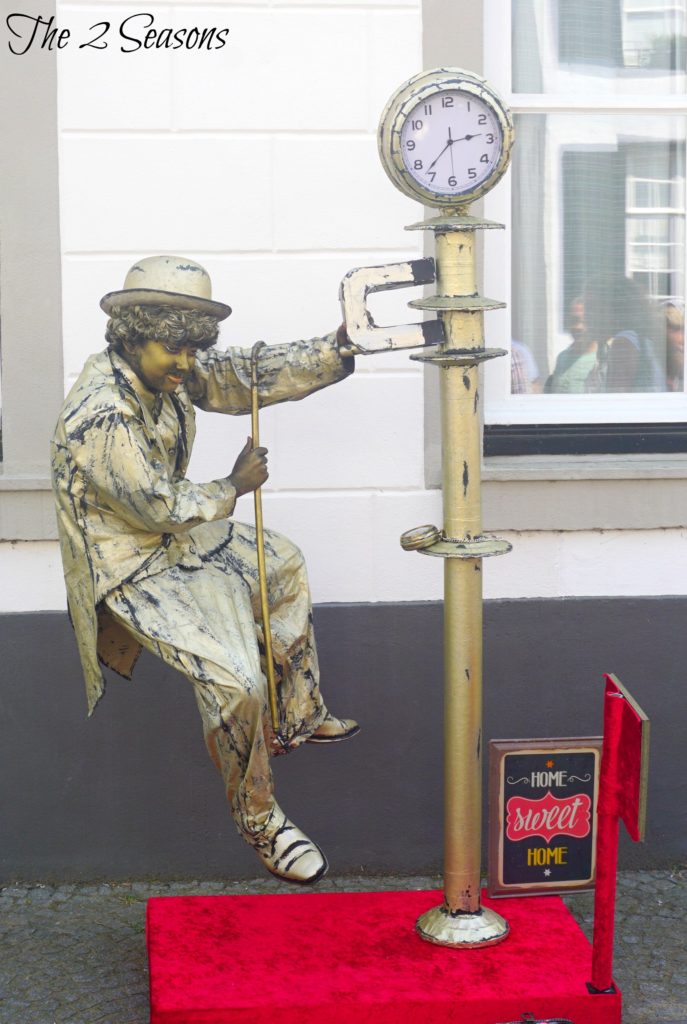 This is Charlie Chaplin.  He held himself up with his own strength for long periods of time. 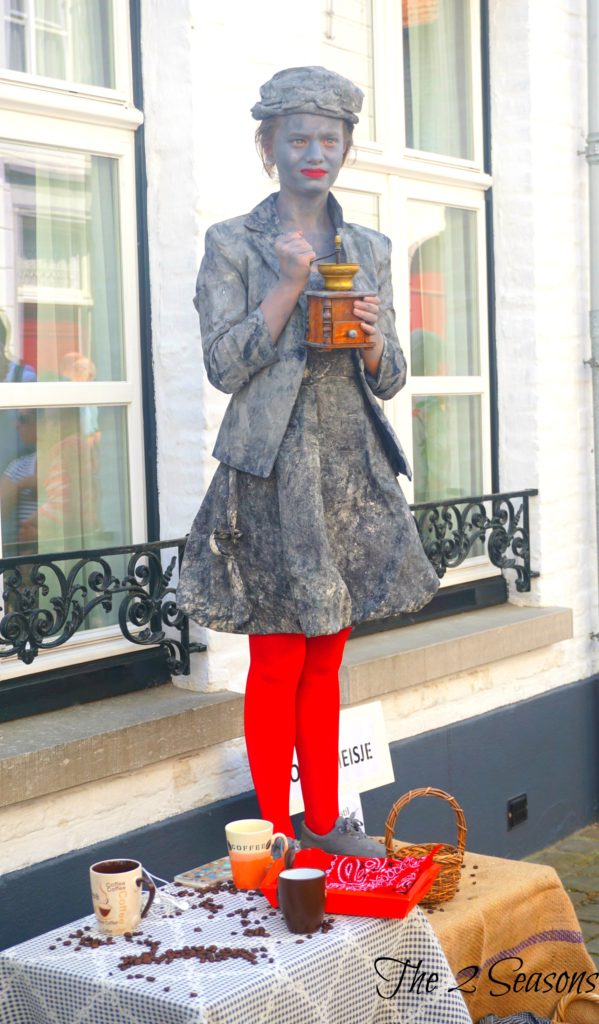 She is a barista. 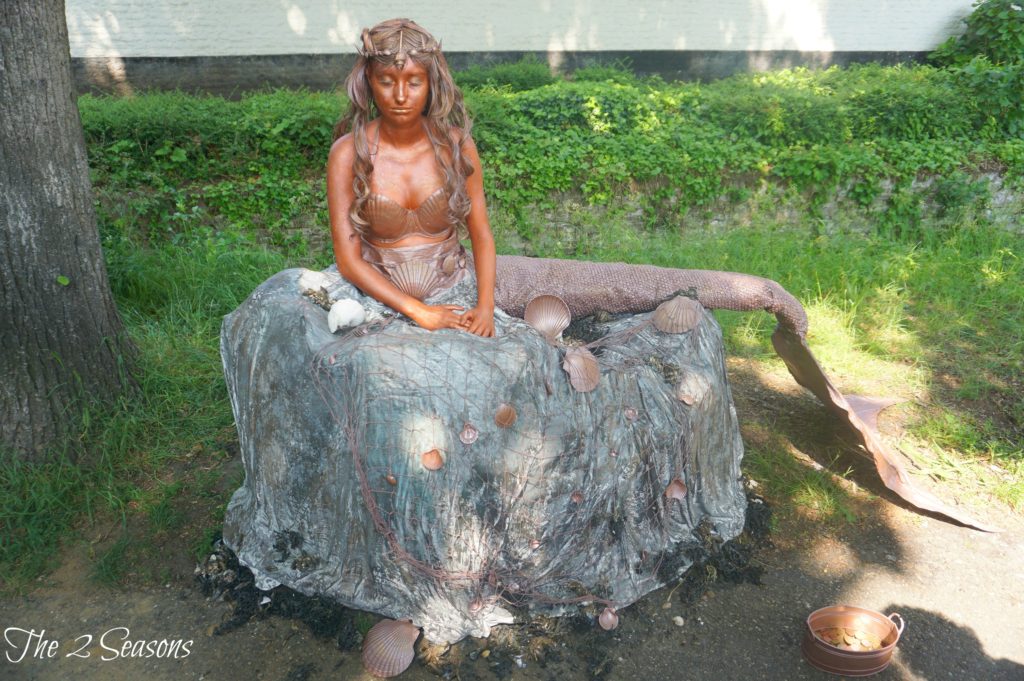 A sleeping mermaid was very impressive. 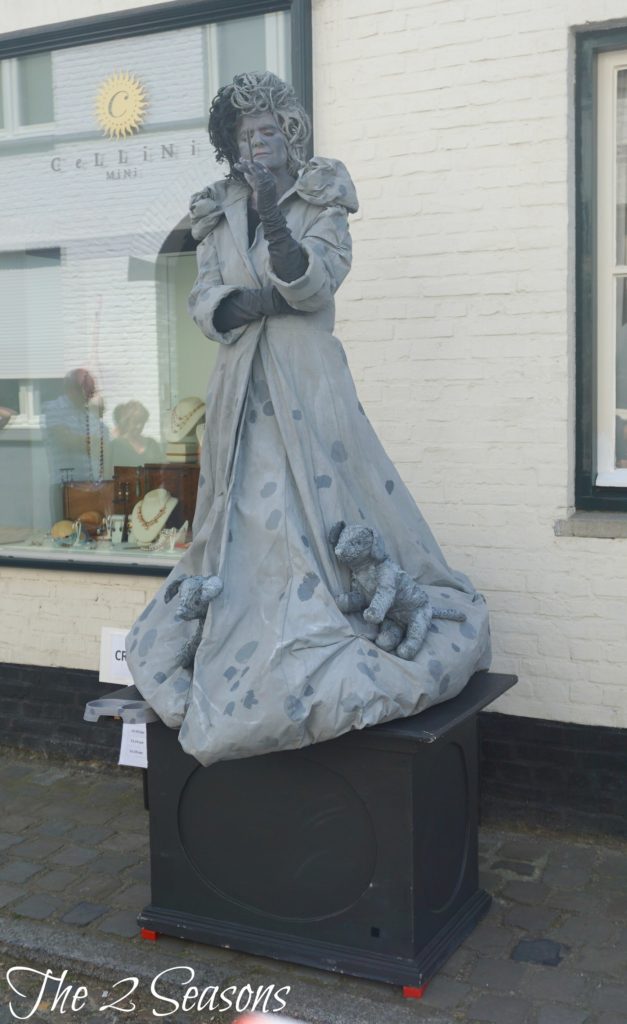 Do you recognize Cruella? 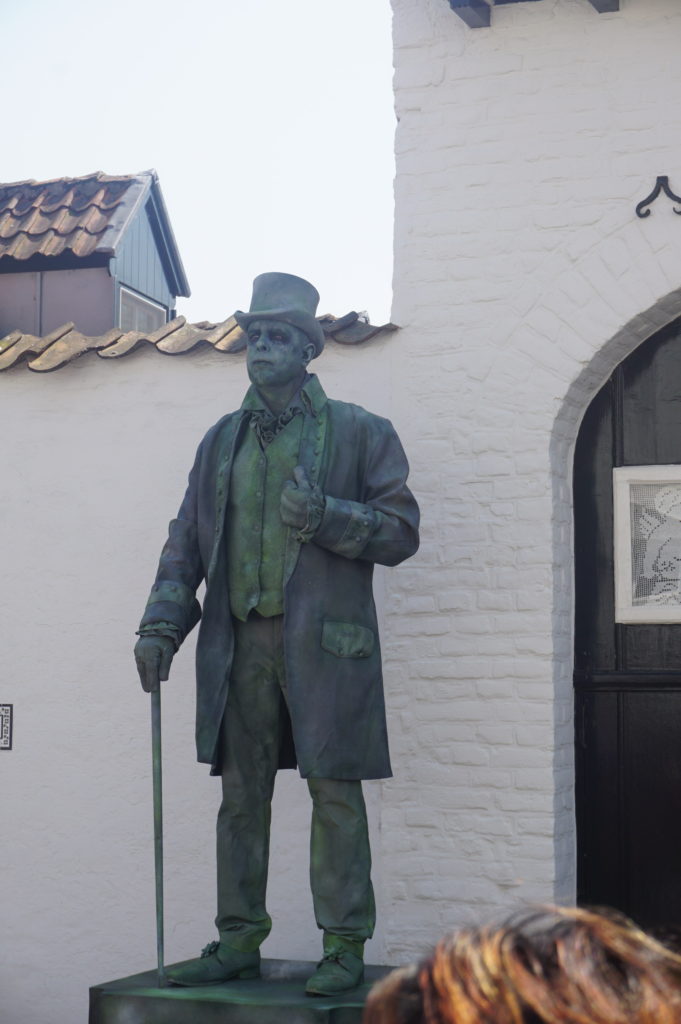 There were so many people that it was nearly impossible to get a shot without someone’s body part in the corner.  That explains the bit of hair in the bottom right of this photo. 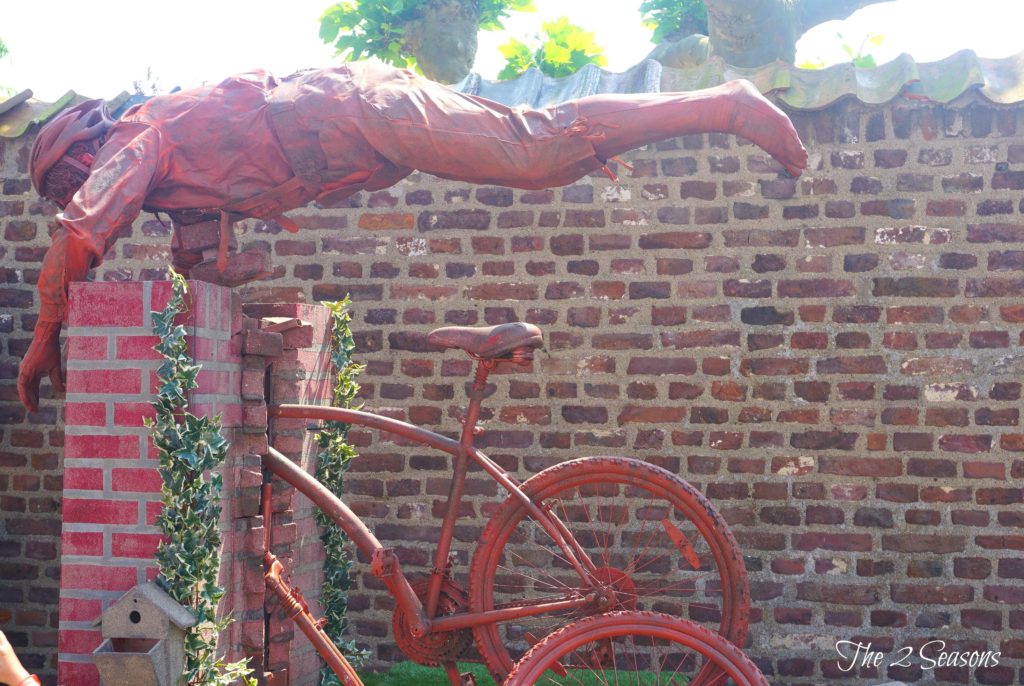 This was my all-time favorite.  He has just “crashed” his bicycle into a brick wall and is on his way over it.  He held himself up with one arm for at least five minutes at a time.  It was amazing.  This is an annual event, and it is a fundraiser.  We just happened to be there on this special day.  It was very hot and packed with people, but I loved seeing it. 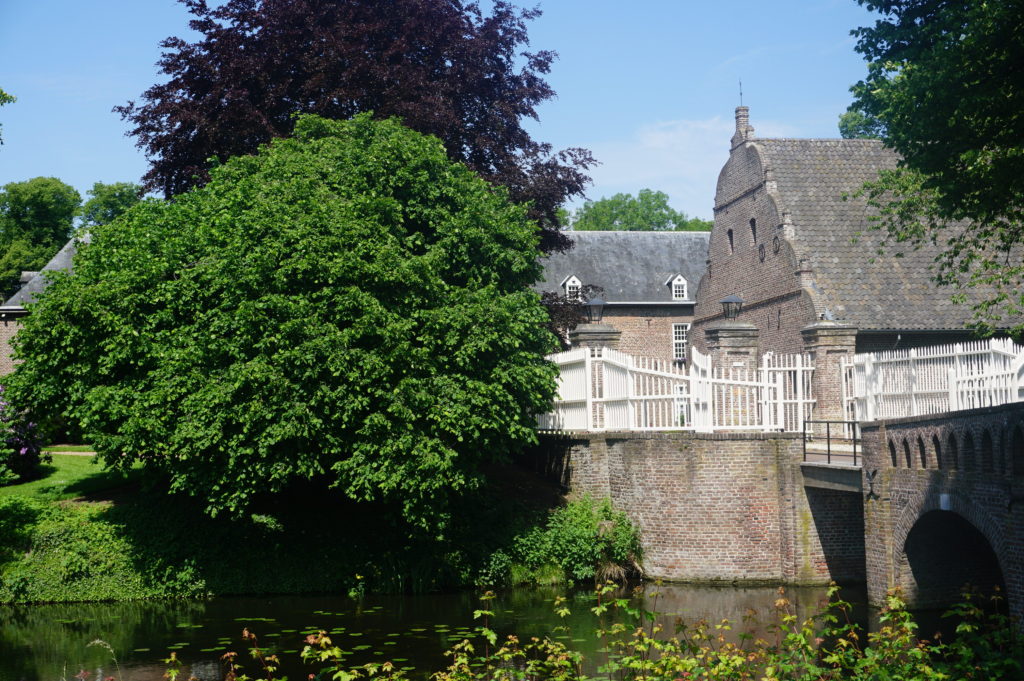 Bicycling in the Netherlands is something that so many friends are curious about.  People ask me if we saw any tulips.  Just like in the USA, certain parts of the country are good for certain things.  Like here in Lexington, we are good at raising race horses and making bourbon.  Tulips are only grown in certain areas of the Netherlands, and we weren’t in those areas this time.  Plus, we were about a month too late for seeing tulip fields, but we have seen many, many of them on past trips. 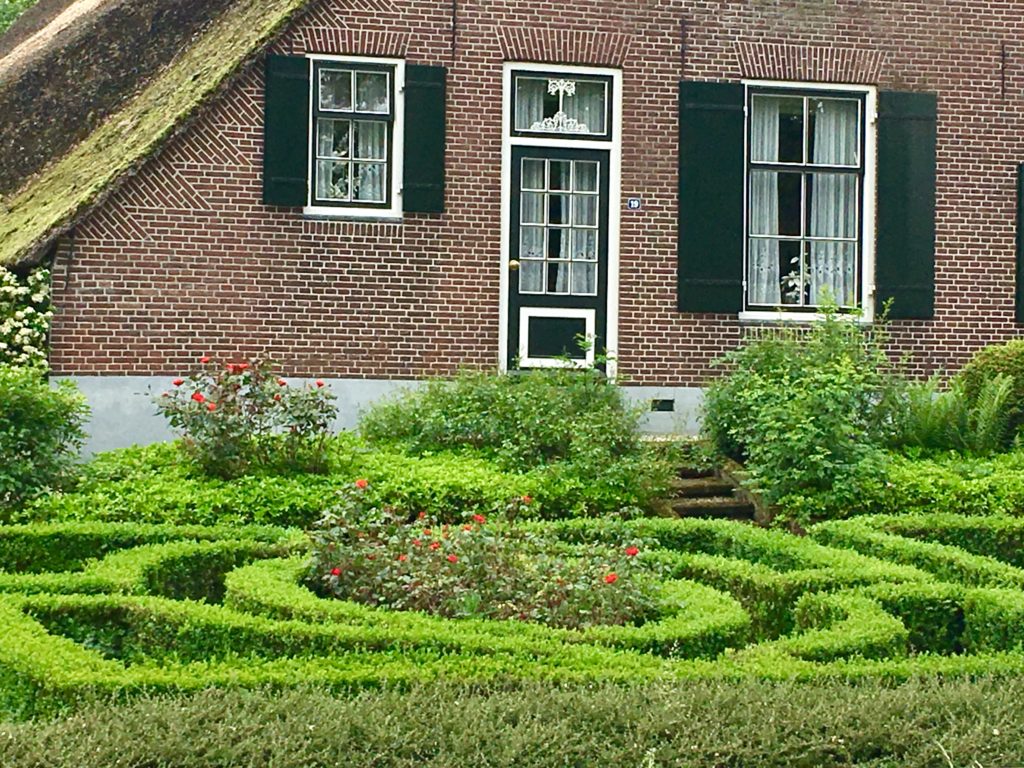 I always love seeing their interesting and beautiful landscaping.  This is a farmhouse that we cycled past. 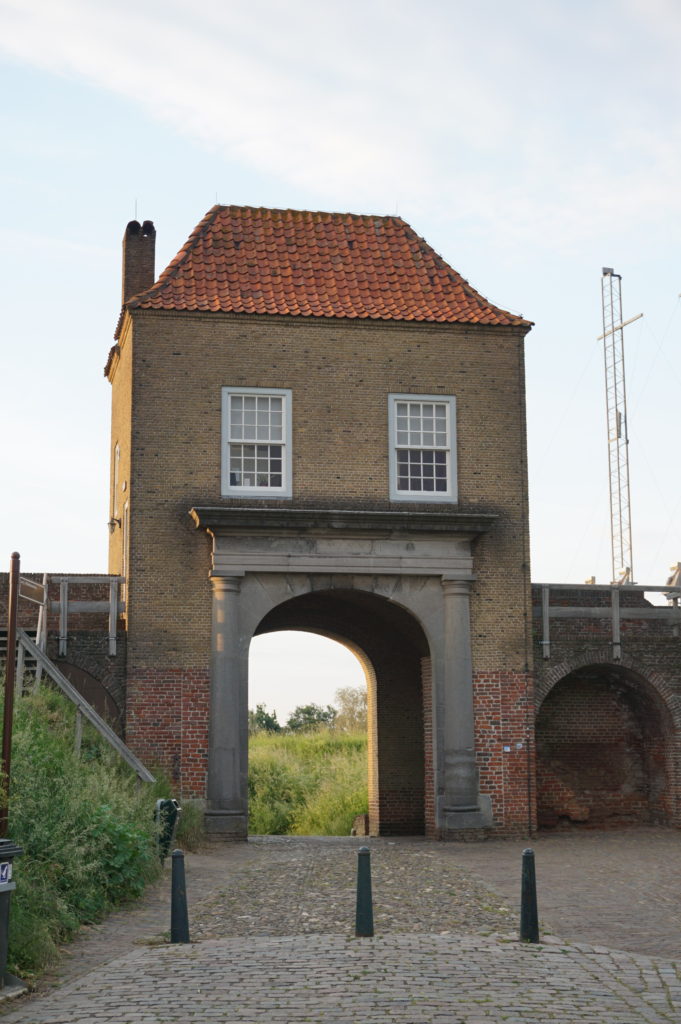 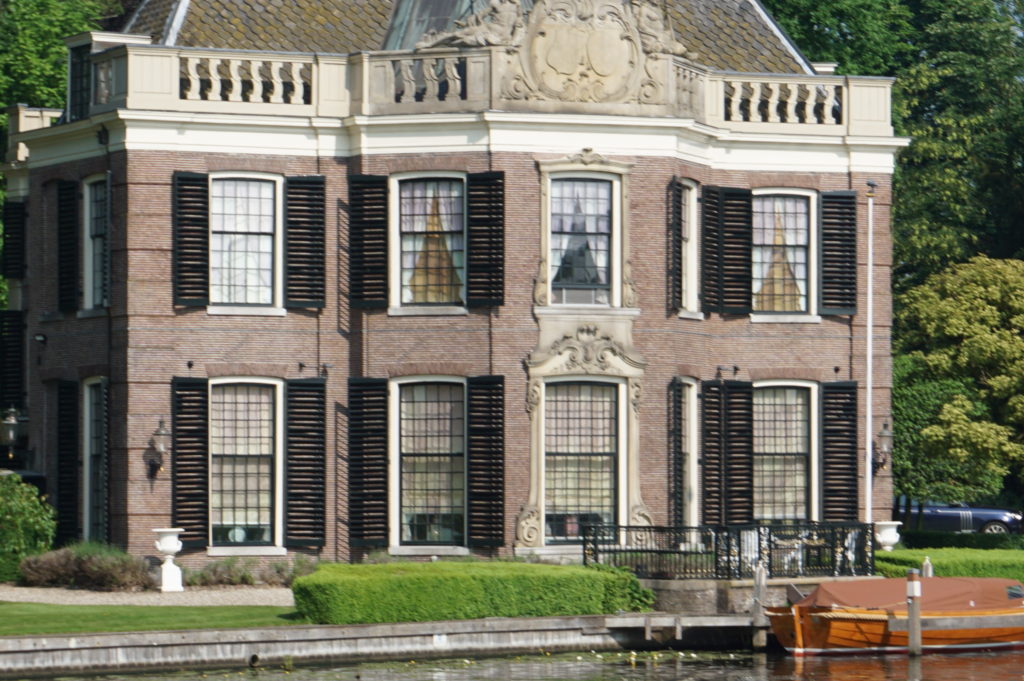 This house was originally built as a summer cottage along the River Vecht.  People would escape Amsterdam by train to cool off in the country. 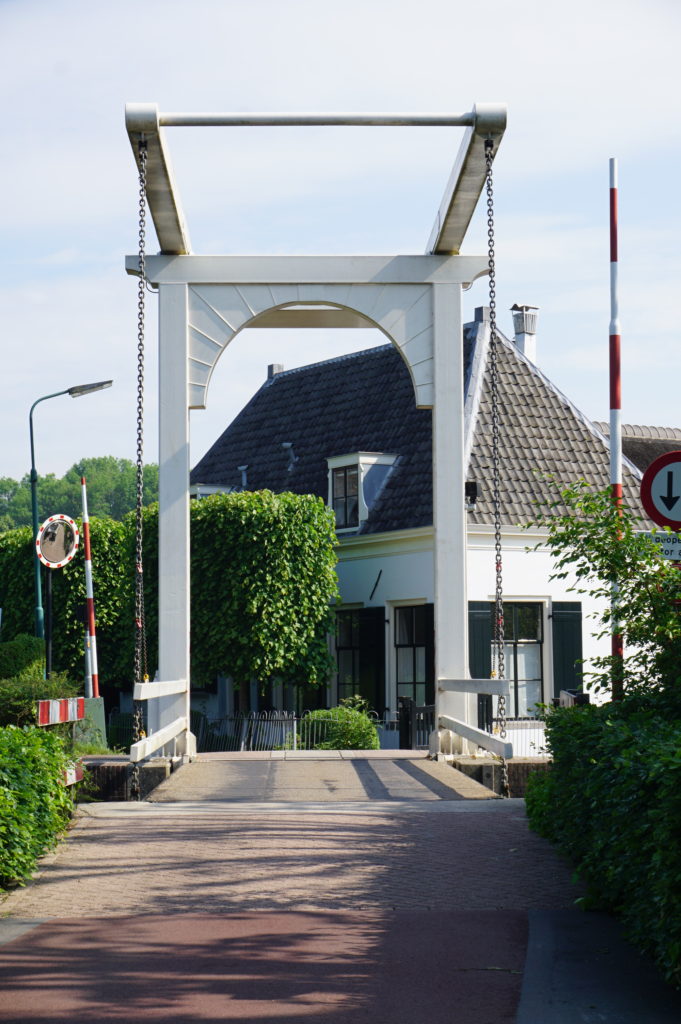 I love their interesting bridges. 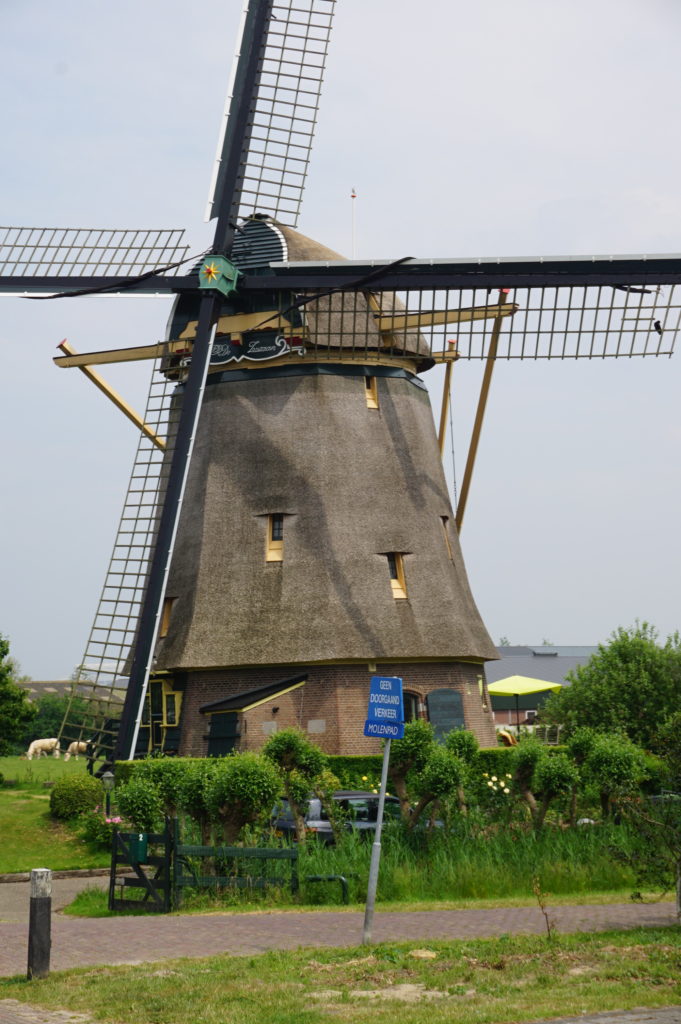 The Netherlands is often called Holland, but Holland is only one of the provinces.  Amsterdam is located in Holland. 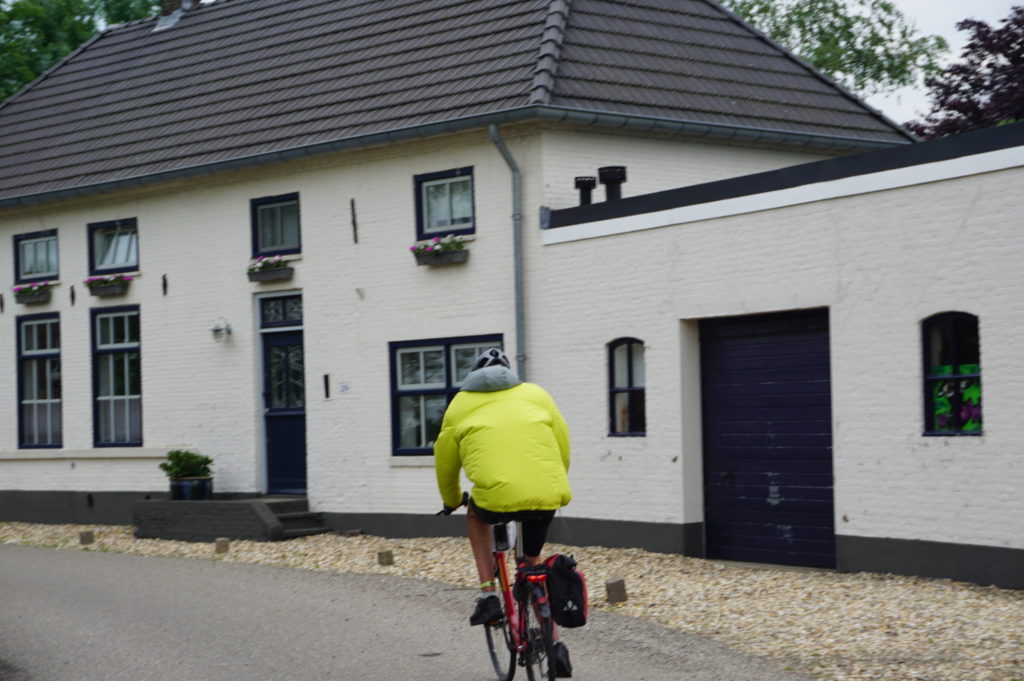 Biking in the Netherlands is Stress-free

Mike likes to do a big and challenging trip each year, but he also enjoys cycling in places like the Netherlands, which is the friendliest country in the world for cycling.  We usually do between 30 to 40 miles a day when we are there, and it is no hassle and stress-free. 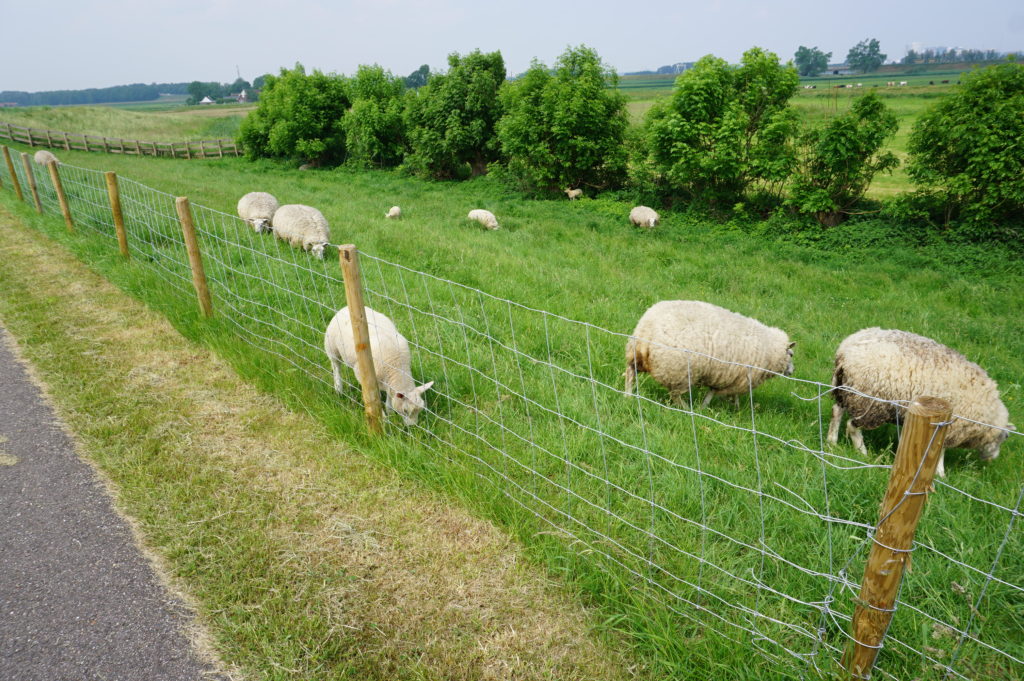 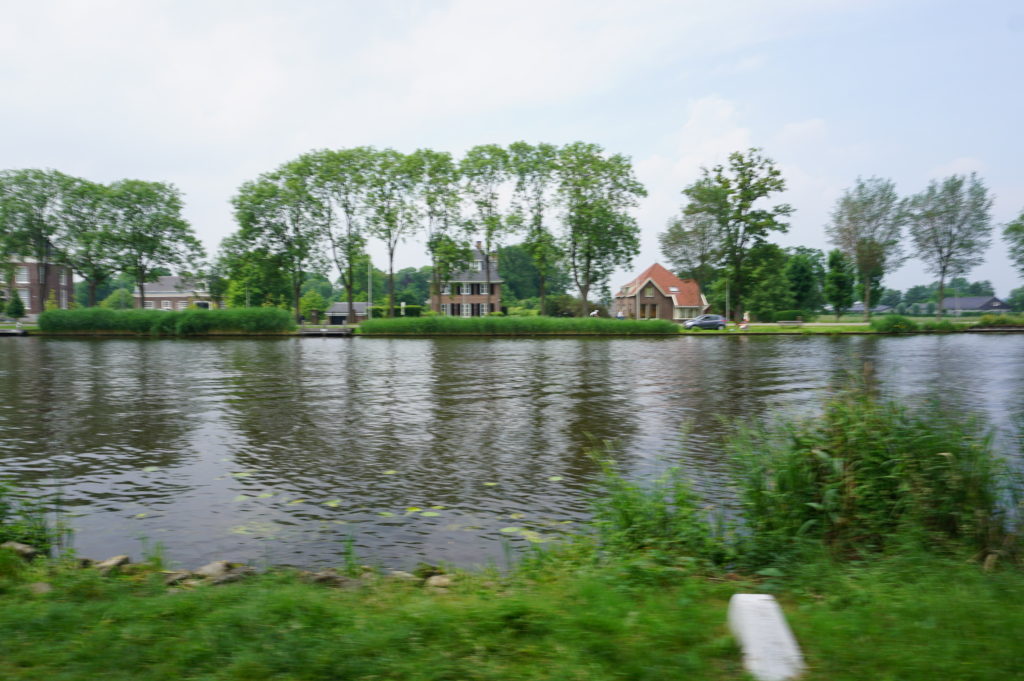 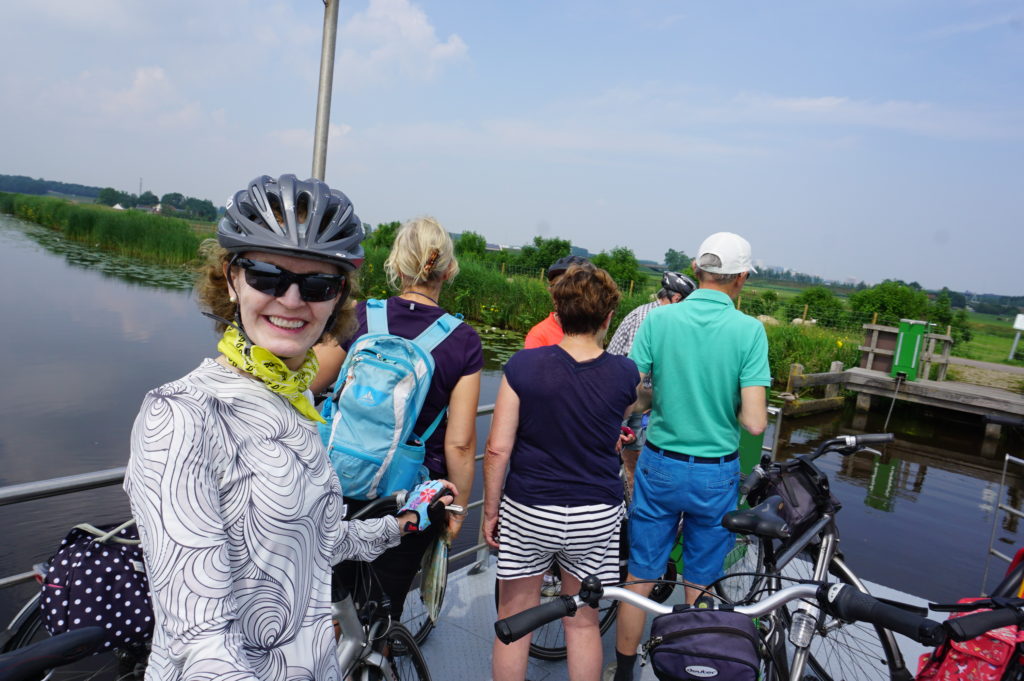 They have little ferries, that work on a pulley system, that are used for crossing canals.  We were about to do the work of getting ourselves to the other side when these folks from Sweden came along and wanted to do it.  The lady with the blue backpack is my “Dutch sister” Francien, and she is coming to visit us in November. 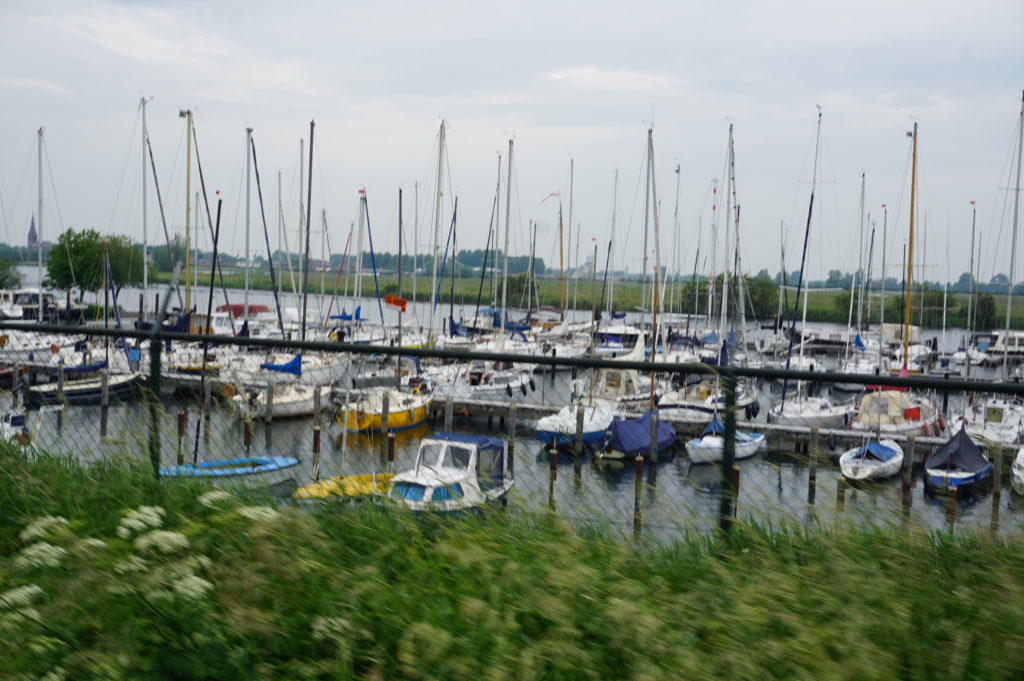 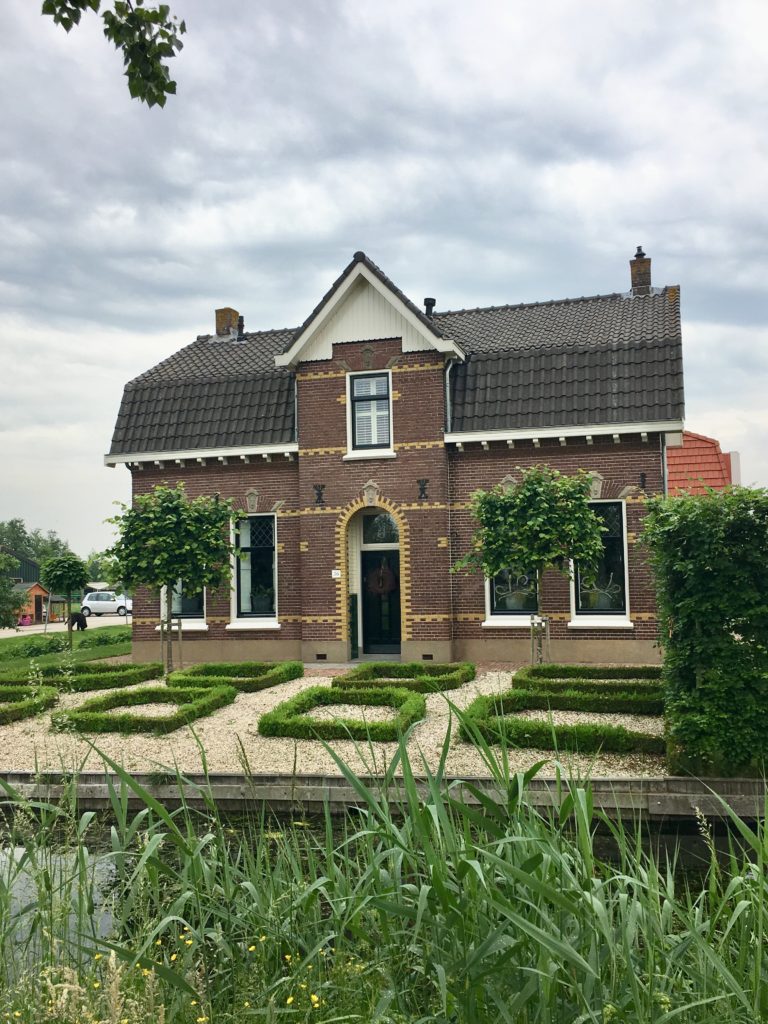 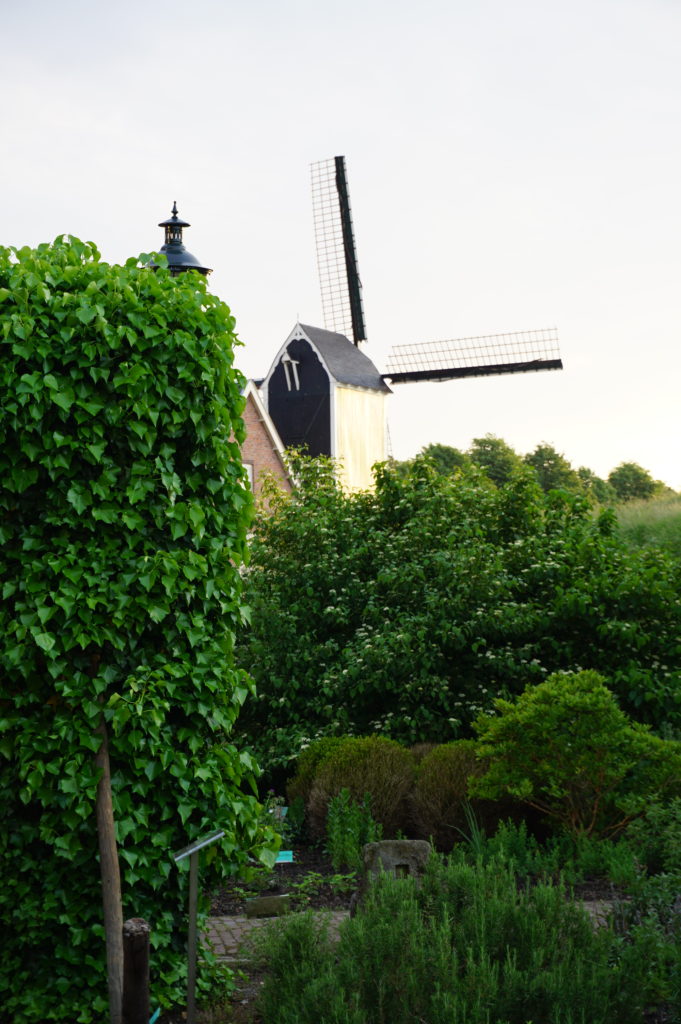 If you have ever thought about doing a cycling trip in another country like biking in the Netherlands and have questions,  just send us an email.  We both have a lot of experience in that area and would be happy to answer any questions you might have.  Thank you so much for being with us today.

Back in the USA

Our Latest Tulip Tour of The Netherlands