We are making progress on our townhouse, friends, and we can finally see it.  Construction has been on going for months, but so many of the things we have done are not things that we can see and appreciate.  Of course, we will appreciate the new roof when it rains, the new windows when the wind blows, and the new HVAC when we need heat or air conditioning.  All of those things, along with the new plumbing and electric, are great, but we don’t stand back and say how pretty they are.  We finally have things that we can see.  Before we get started, I ordered eight beach towels from Lands End yesterday.  The quality is super good, and they are on sale for $15.00 each.  They have really cute colors.  Go here to see them.  Now on to the update. 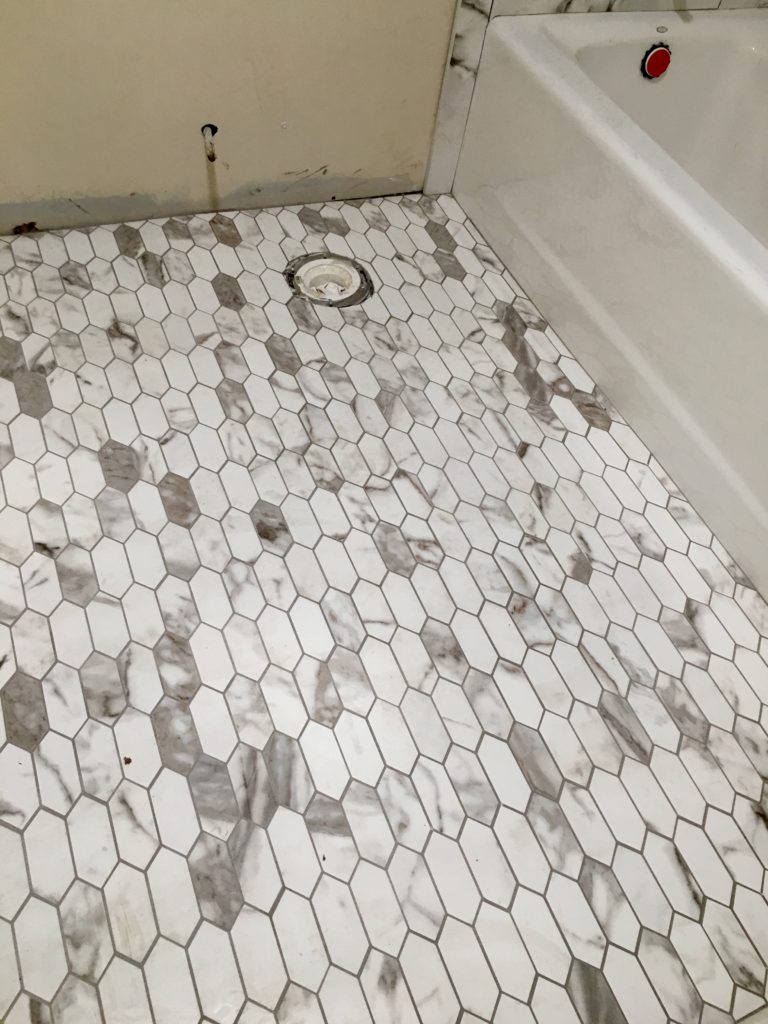 For instance, the bathroom tile is down on the floors, and the showers will be finished this week. 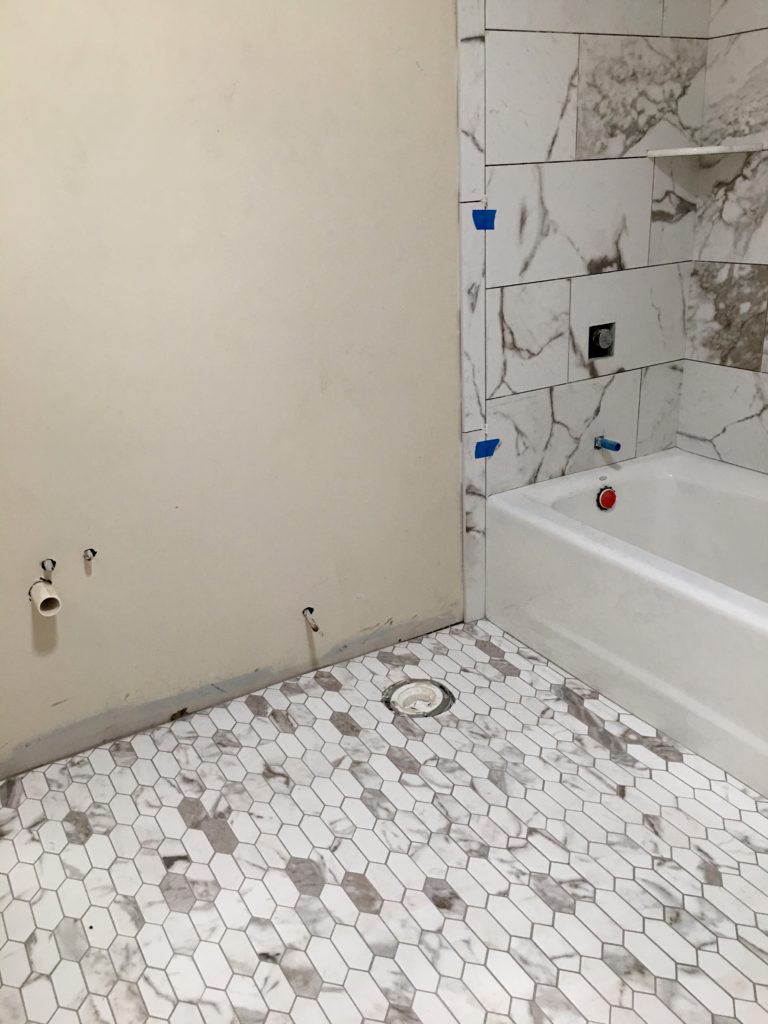 This is the guest bathroom, and the tile there is complete.  There was a glitch, though.  When I saw this tile on the wall, I hated it.  It was way busier than the sample tile that they had in the showroom.  Knowing that it was going to be in the master bath shower and the office bath shower on the first floor put me into a panic.  It took about ten minutes to push the pause button.  I told the tile installer to stop working, and I promptly went to the tile wholesaler to select a different tile for the walls of those two showers.  And it’s white!!!  Actually, it’s called Chalk, and it’s by Happy Face tile.  It will be perfect with those hex floors that I am totally crazy about.  We ordered it, and it only took a week to come in.  They won’t take back the original tile that we bought since it was a special order, so we will try to sell it on Craigslist at a deep discount.  It was an expensive mistake, but I am glad I was able to switch paths in the middle of that project.  And meanwhile, the busy tile has grown on me but not enough to have it in all of the bathrooms. 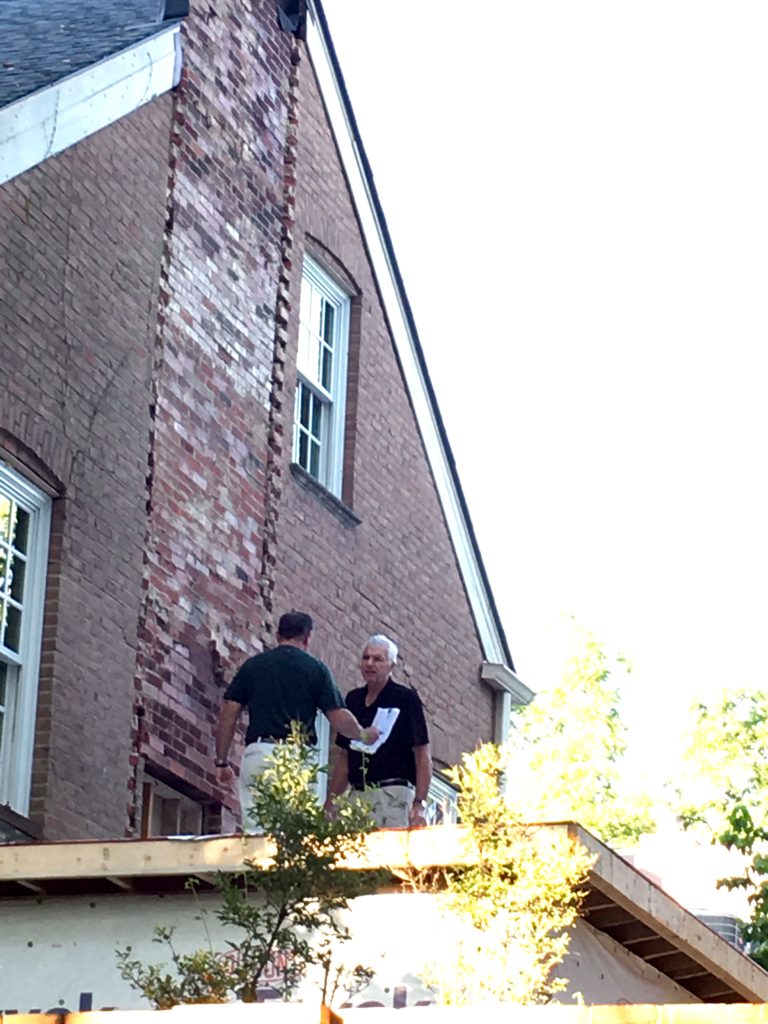 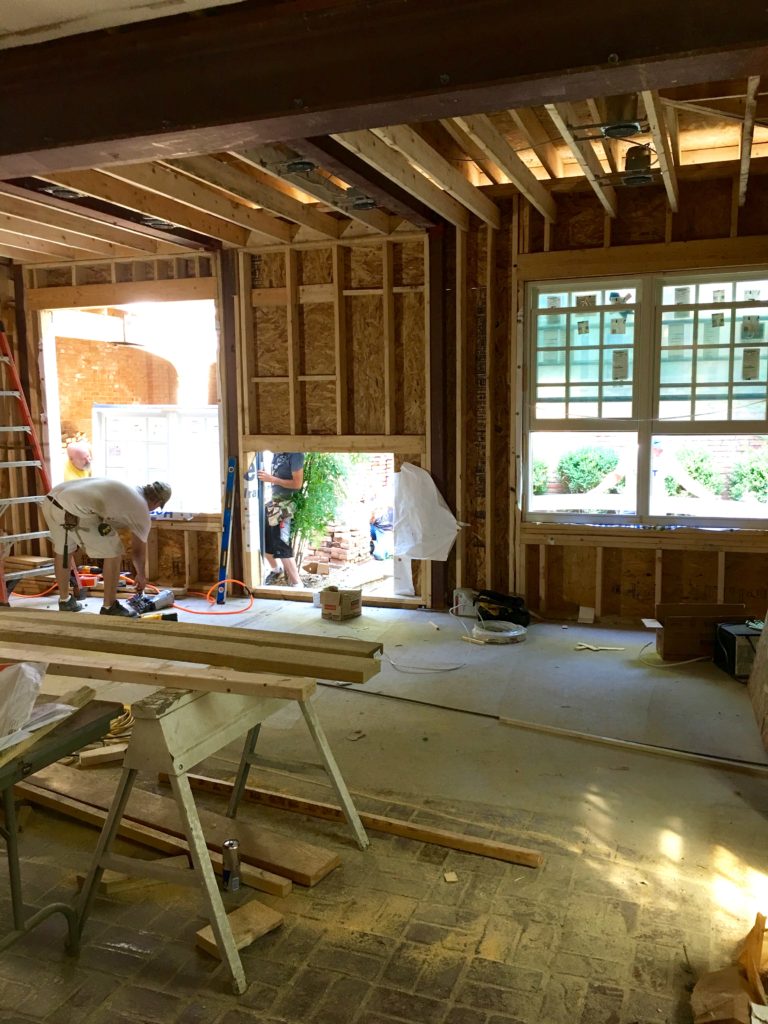 This morning the windows went in.  The first one is in here. 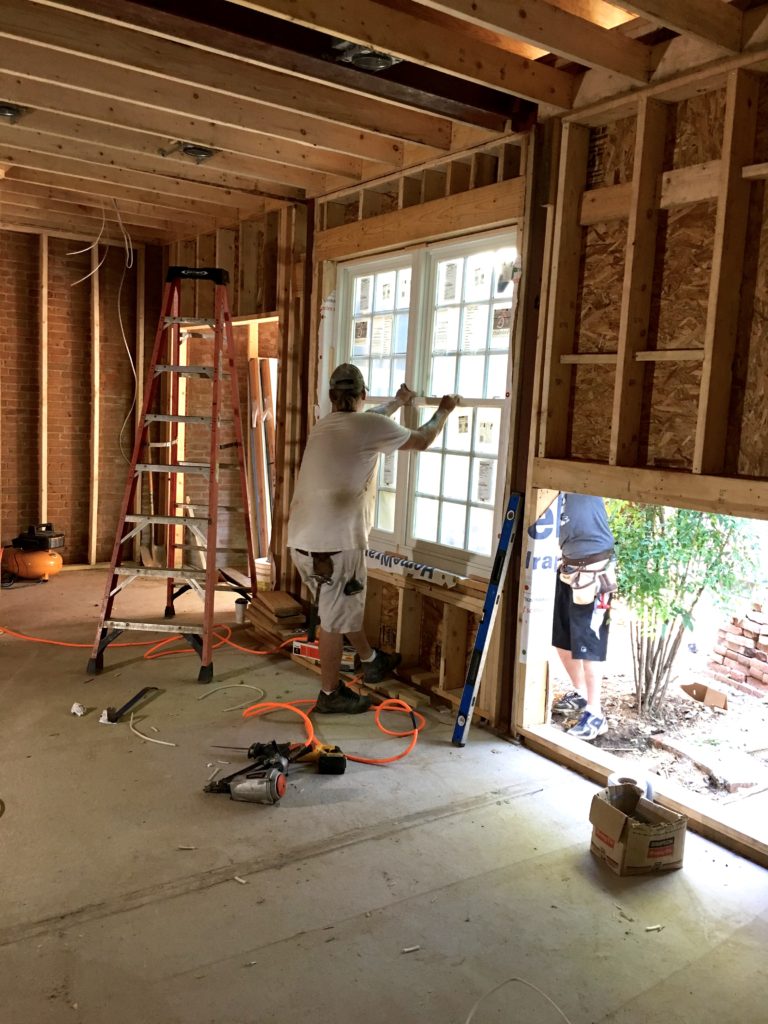 And here goes the second one.  The opening on the far left will be the Dutch door and side lights.  That door will go into the breezeway that we are turning into an enclosed porch. 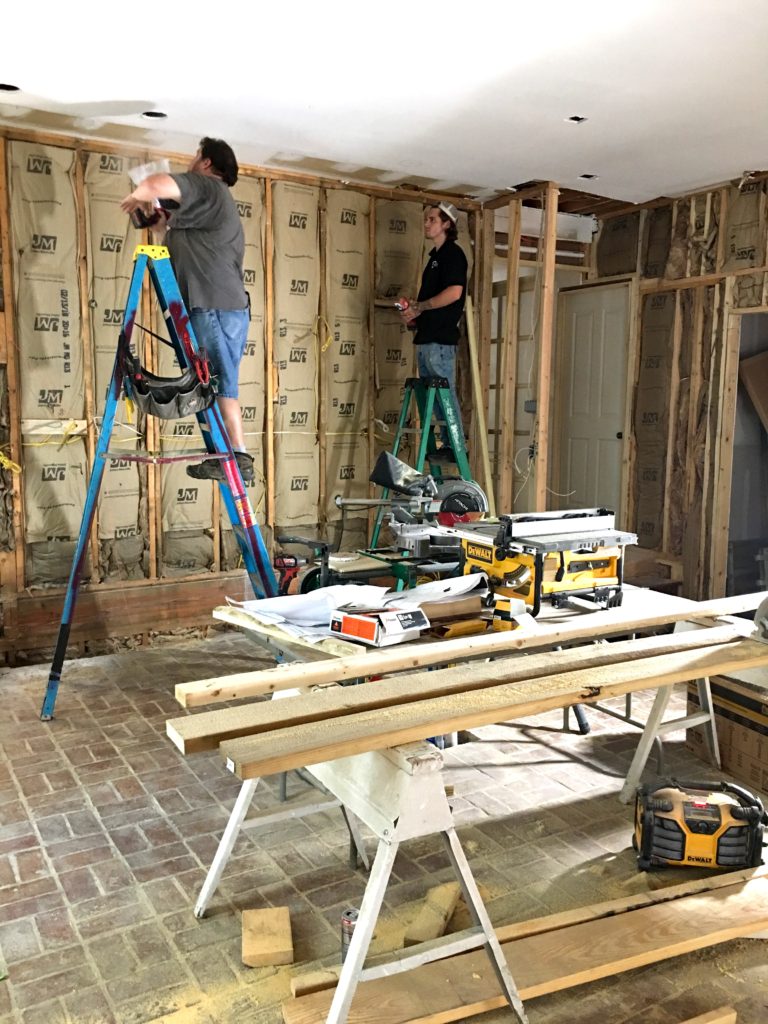 Here the electricians are in the kitchen which is opposite of the addition.  They’re getting everything wired and ready for appliances and lights.  We added insulation in all of the interior walls for sound control. 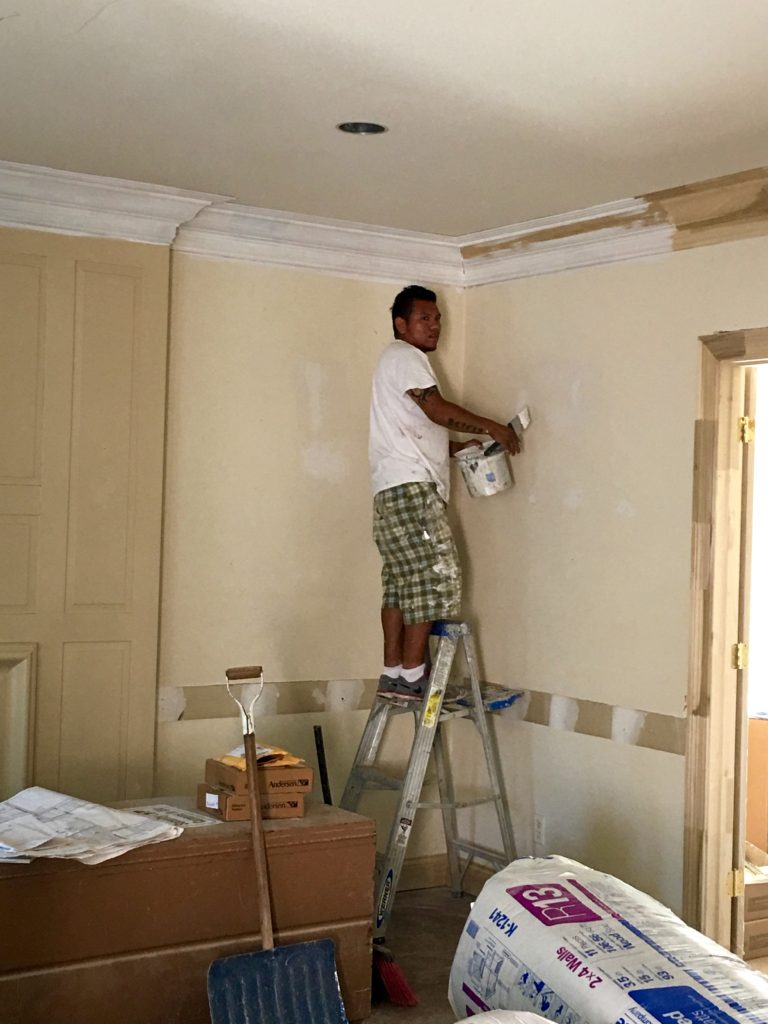 The painters are back and working on the trim.  He is applying the primer to the new molding that replaced the original dental molding.  It was just too busy for our tastes.  The walls will be the same color throughout the house.  We selected Sherwin Williams’s Stucco with 50 per cent pigment.  It’s a nice warm neutral.  All of the closets and the pantry will be Pure White.  The second and third floor ceilings will be Pure White, but the first floor ceilings will be the same color as the walls.  That will help highlight the trim. 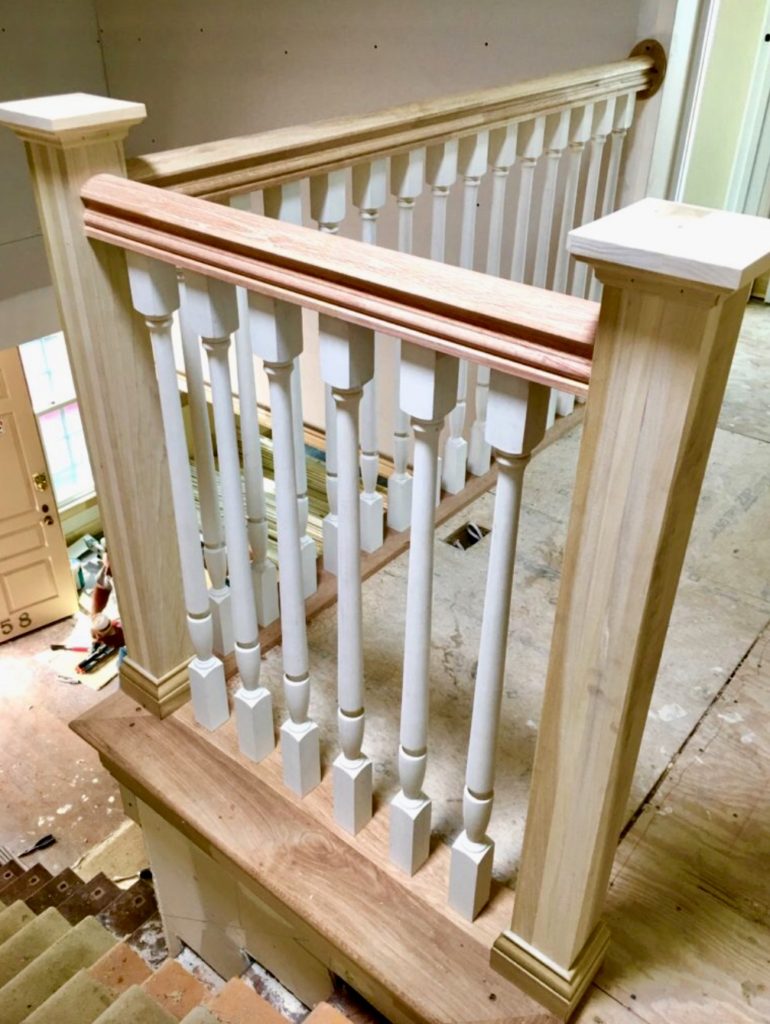 They will also start painting the stair railings, etc. today, too.  The stairs are completely finished, but I guess I don’t have a photo of it.  The top rail and the caps on the banisters will be glossy black, and the spindles will be white.  That’s a classic look that I have always liked and decided to do it in this house.

We are moving into the third floor at the end of the month, and it for sure will be finished.  The second floor( except the hardwoods) will be finished by then, too.  The bottom line is that we will be camping since we won’t be moving our furniture in from storage till everything is finished.  I would much rather sleep on a twin bed in the dorm (thankfully, I have already purchased three of them) than move into another apartment.  If you are new here and don’t know what this is about, here goes:  We are currently renting a furnished apartment during the construction of this townhouse.  We told our landlord we would for sure be out by the end of July, so he rented the space beginning Aug. 1.

The #porch is ready for spring, and we are sharing

If you are in a home school rut, Angela from @pari

This is our governor. He rocks!!! #teamkentucky

We have a comfort food recipe for you today using

The hubs said plates won’t look right on a porch

Thank goodness for Zoom. My 6 am jumpstart class m

If you are overwhelmed with coming up with meal id

I found these cute robin matches on my last trip t