It’s been a while since I told you about our trip to Nicaragua (here and here), and we went to Panama while we were on that trip.  After our volunteer trip ended on Saturday, Mike, two friends, and I boarded a plane on Sunday and flew to Panama City, Panama. 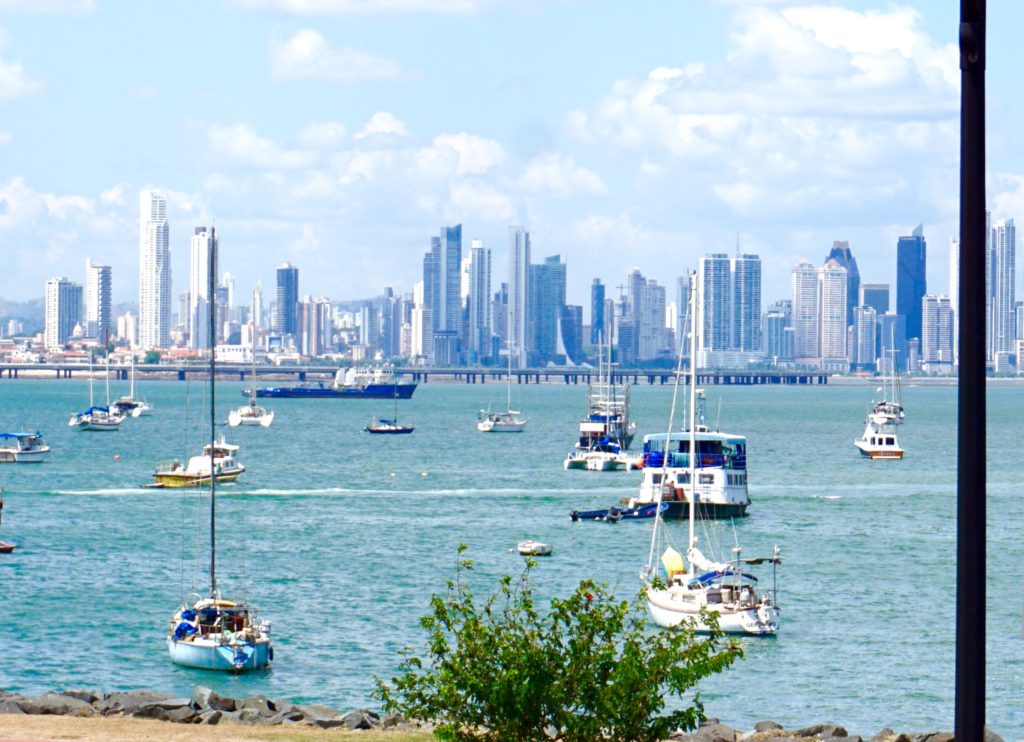 I can’t tell you what I was expecting PC to be like, but I can tell you that it was a total surprise.  I guess we were expecting something somewhat rustic and were blown away to discover a very modern city loaded with skyscrapers, good hotels and restaurants, shopping, and of course, the Panama Canal. 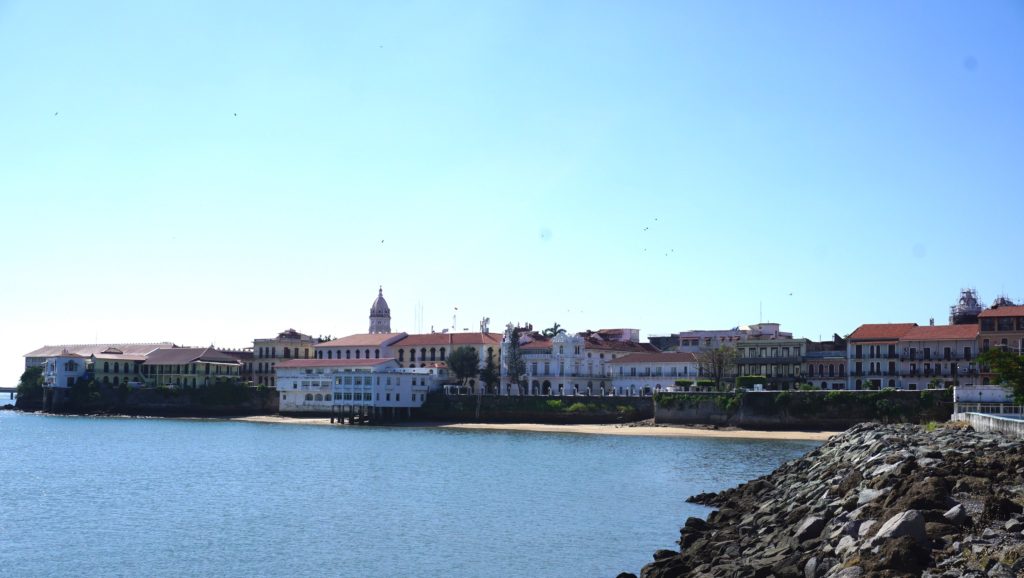 We stayed in the old part of the city where all of the top rated restaurants are located.  The old city has been neglected, but building by building, it is being rehabbed and is making its way back.  There were areas that looked as if a bomb had exploded, and there were beautifully restored buildings, parks, and squares.  There are gorgeous historic hotels that have been modernized, and there are lots of boutique hotels.  Our hotel was a funky little place with lots of concrete, a good view, good bar and restaurant, and a convenient location. 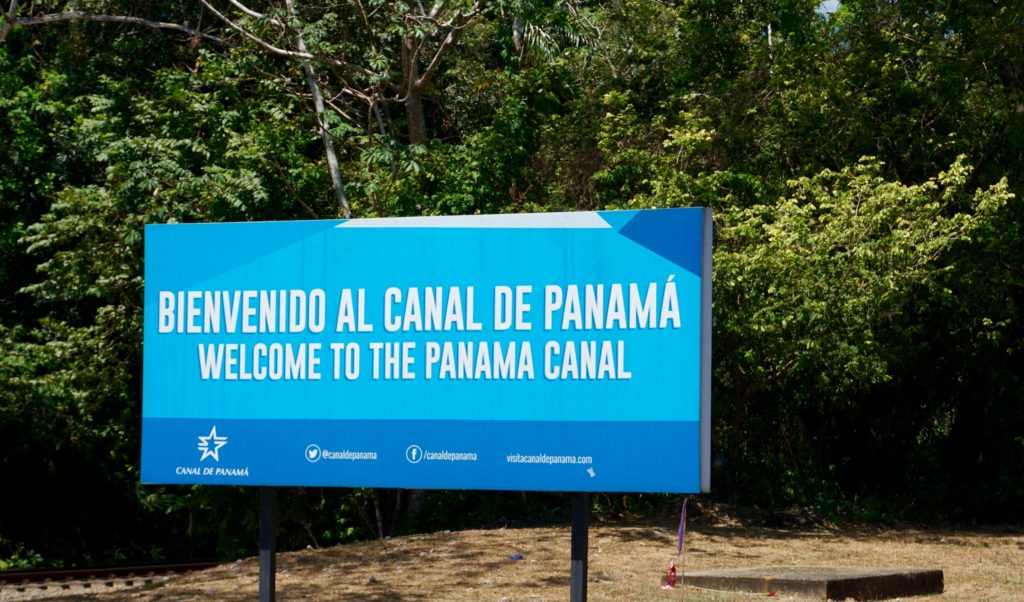 The main goal for our visit was the canal.  We wanted to see it, ride on it, and learn about it.  So, the first day, we did something we often do when in a new city.  We bought tickets for the  hop on/hop off bus and saw the city and its surroundings while someone else did the driving.  We have found on many trips that taking one of these bus rides on the first day helps us get acclimated to the lay of the land.  Some people frown upon them, but as seasoned travelers, we highly recommend them. 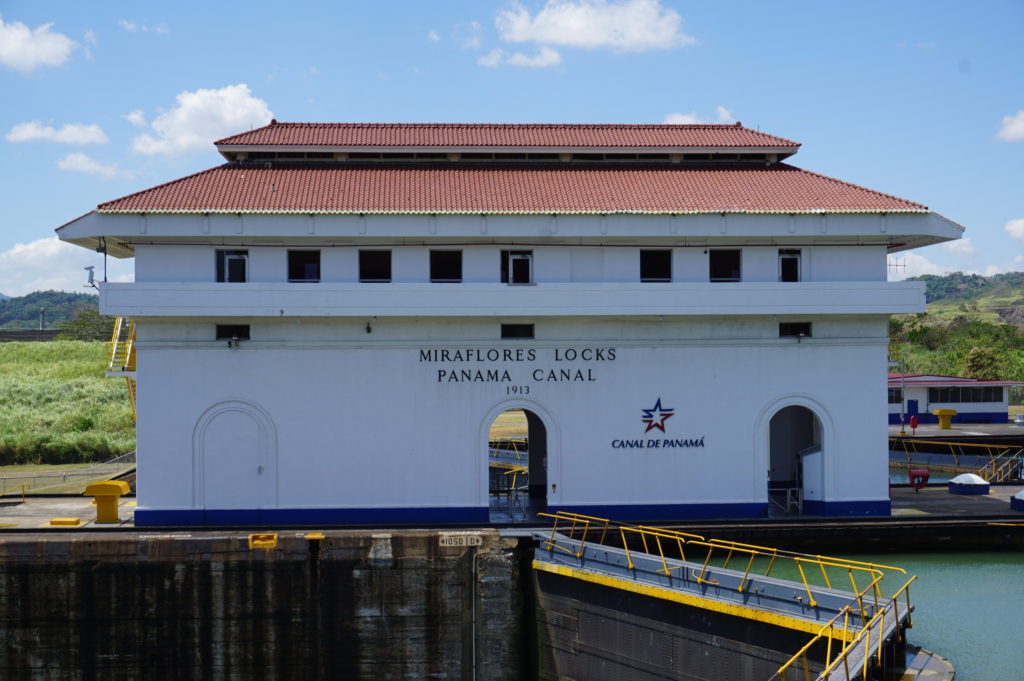 We spent several hours at the Panama Canal museum, which was one of the bus’s stops.  It is located on the Miraflores lock.  The canal is 50 miles long, and there are three sets of locks. 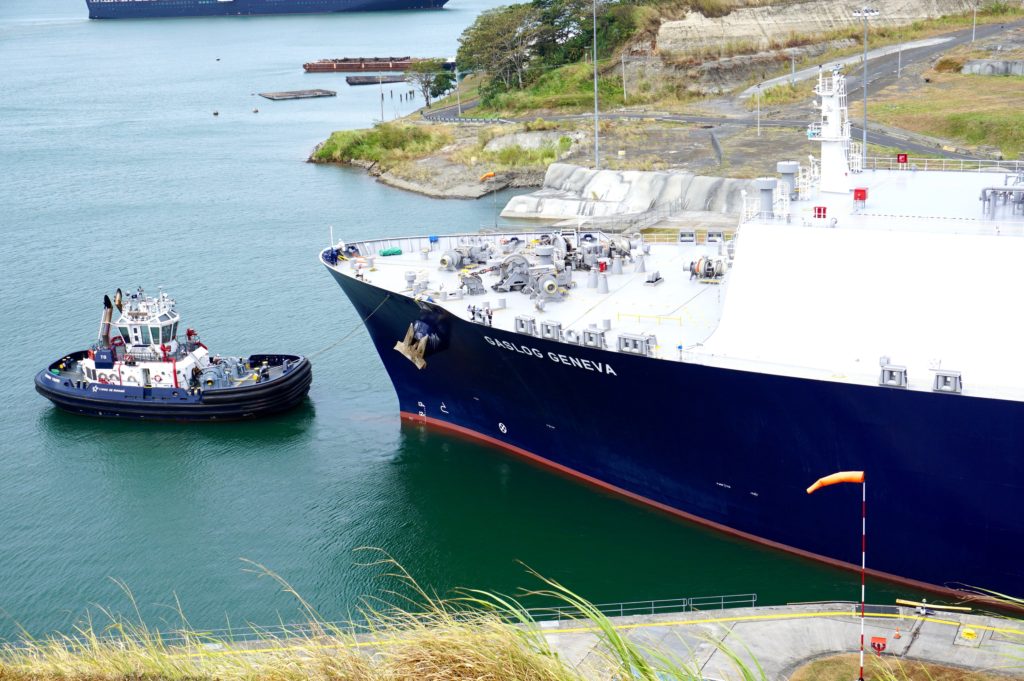 We learned about the history of the canal and got to watch ships travel through the canal while we stood on the observation deck.  The old canal is fairly narrow, and so, they built a wider/newer canal right beside it that can handle bigger ships carrying more freight.  I read this book which helped me understand the whole process and how difficult it was to actually get the canal built. 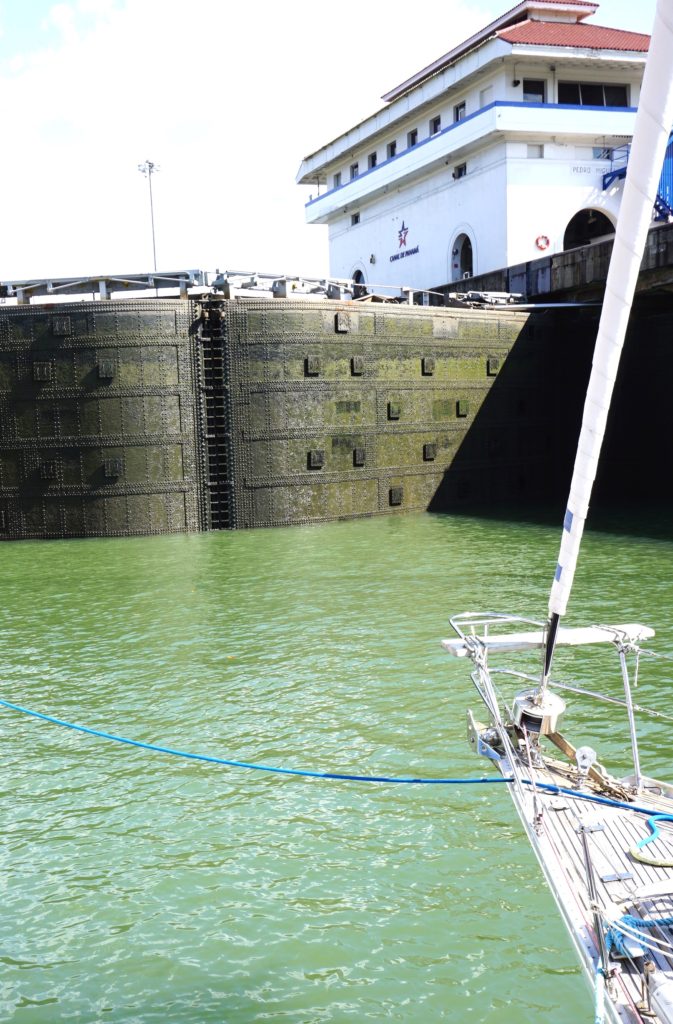 Travel on the Canal

On our second day in Panama City, we took a boat ride on the canal and traveled through the locks. We worked with a tour office just a few doors away from our hotel, and they were so helpful.  It really wasn’t necessary to book all of the day trips in advance. 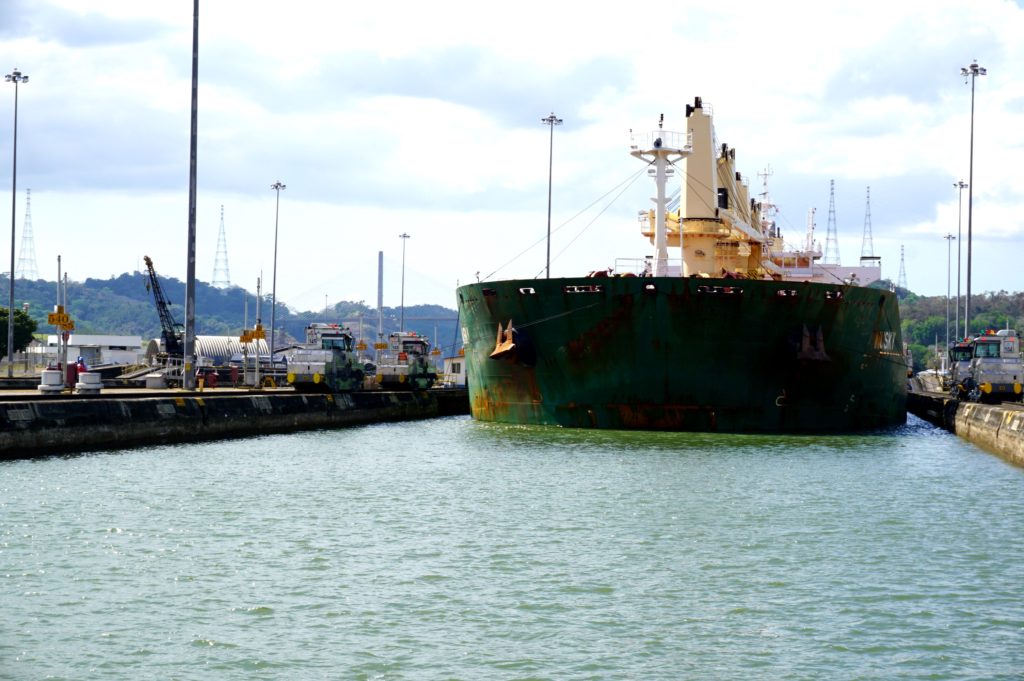 The canal system works very slowly, and our boat, which had 90 day passengers, was at the mercy of the lock captains.  Because the lock system is complicated and expensive to operate, we had to partner up with a two smaller boats and a huge ship.  Each ship, no matter how large or small, pays to travel through the canal.  It is based on the boats’ sizes. 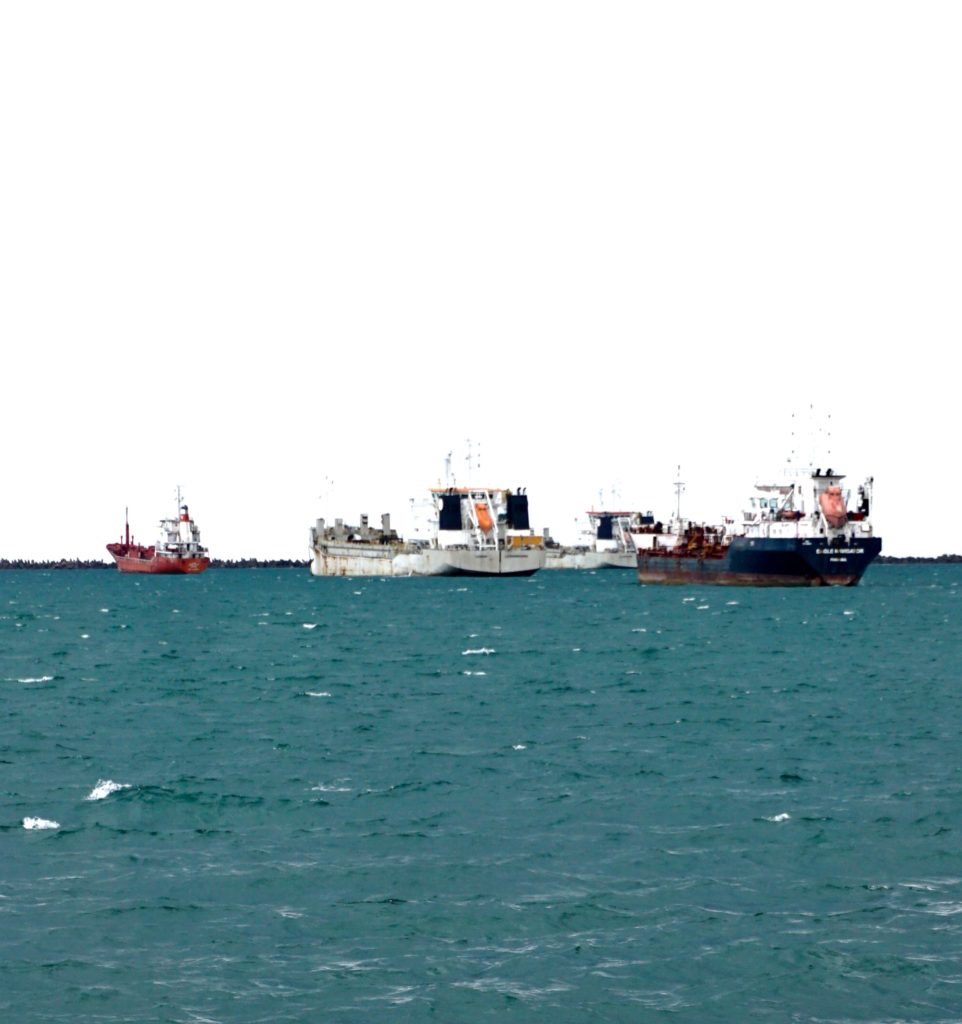 No ship passes through the canal before it has paid the fee, and it must be in cash.  There are boats just sitting in the water waiting to travel through the locks and get to the other side.  Some are ahead of schedule and have to wait their turn and others are waiting for their payment to be processed. They can sit there for days, if necessary. 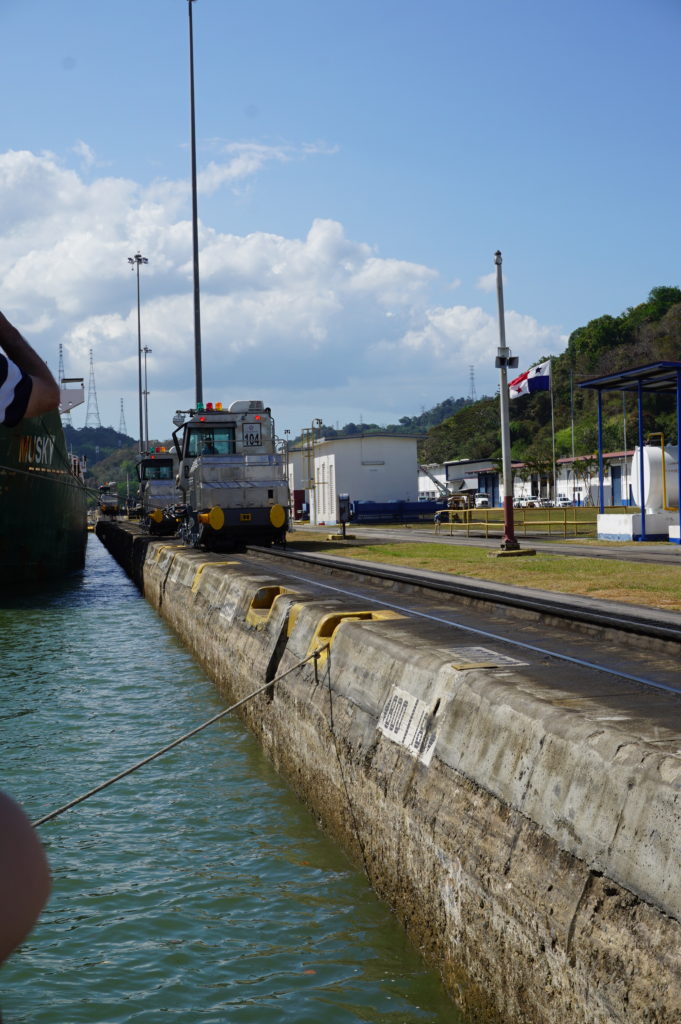 The lock fees are quite high, but when they factor in the amount of time it lessens in traveling from the Pacific to the Atlantic and vice versa, the fees seem somewhat reasonable.  The highest fee ever paid was $1,400,000. for a huge freighter that had 14,000 containers on it.  Cruise ships’ fees are based on the number of beds they have on board, even if they are unoccupied. 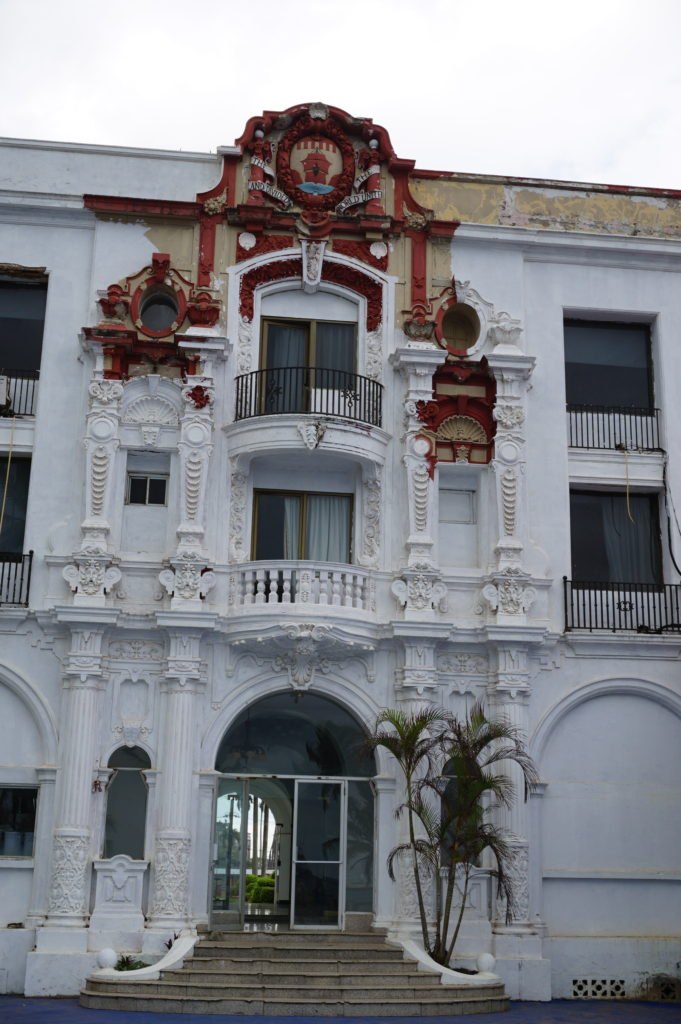 For our third day, we took a fun train ride to the Atlantic/Caribbean side of the canal.  Then we had a van meet the four of us there with three tour guides.  What a difference this side of the isthmus was! We drove through the city of Colon and only got out of the van to visit a once-beautiful hotel that has fallen into disrepair.  It was a cloudy day.  According to my book, Colon was a  “shanty town” (their words/not mine) when the canal was being built. 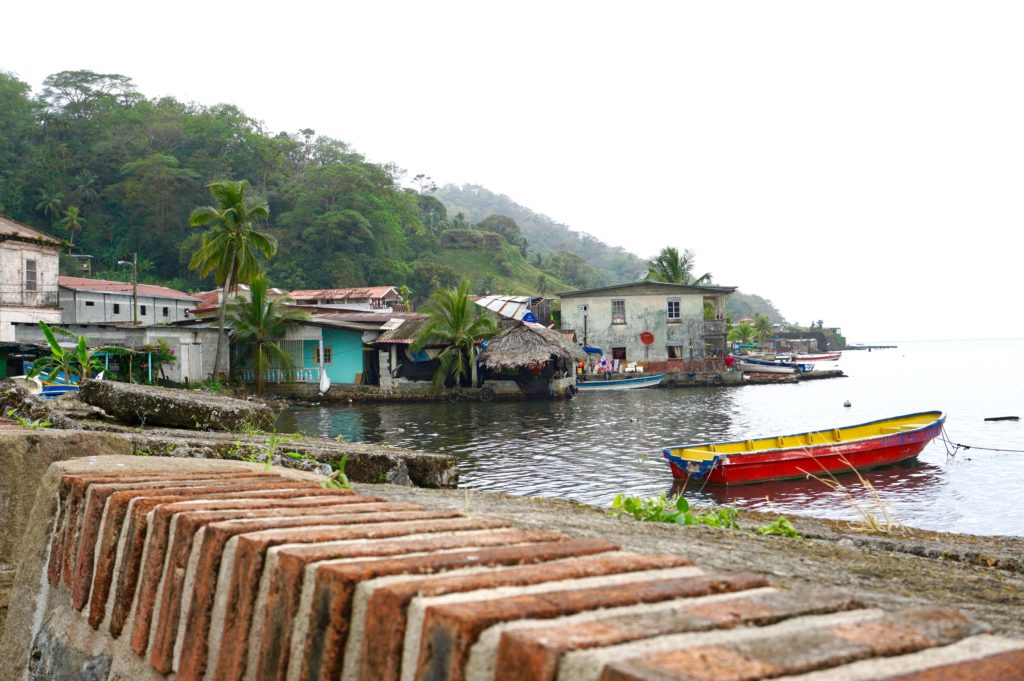 After a lovely lunch at a country restaurant, we visited another small town in the area.  They, too, were loaded with poverty, dirt, falling down houses, and sadness.  There was an old fort and a purple and white church that had a black Jesus statue that had a story to go along with it.  There were tons of people just sitting around, and I have to tell you that I felt strange walking around on their streets while they sat idly and stared at us.  I was happy to get back in the van. 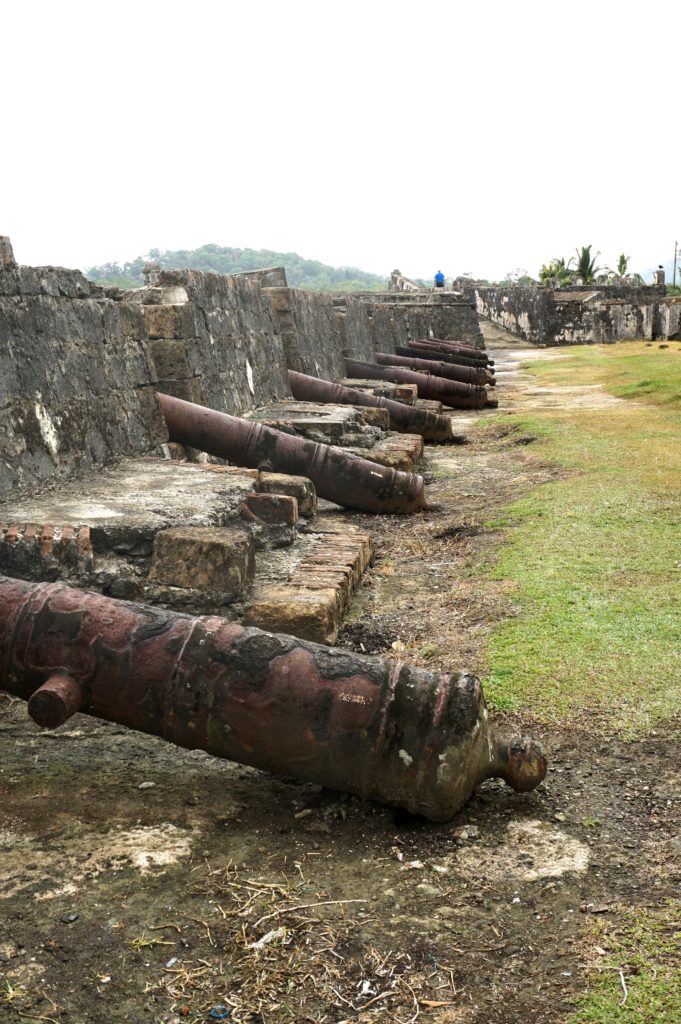 We had three very full days in Panama, and we felt as if we had done everything on the “must-see/must-do” list.  We saw the sites, ate the food, walked the streets, explored, learned, and enjoyed.  That’s a perfect vacation stop in our book.  Everyone is always asking me where we are headed next.  Mike and I are flying to Europe in May for two weeks of bicycling in Provence and then in the Netherlands.  We are hoping that things go smoothly on our remodeling project while we are away.

Our Bicycle Trip from Pittsburgh to DC