Bicycling in Russia wasn’t on my bucket list until Mr. Right suggested that it might be a fun trip.  We talked about it for a while and then booked it.  We recently returned from an amazing three week trip to Russia and the Baltic States of Latvia, Lithuania, and Estonia.  I really don’t like to rank and rate our trips because it would be sort of like picking out a favorite child.  Every child is the favorite, and every single one of our trips has been my fave.  However, I did tell Mr. Right that this one would be a tough trip to top.   It was that good. 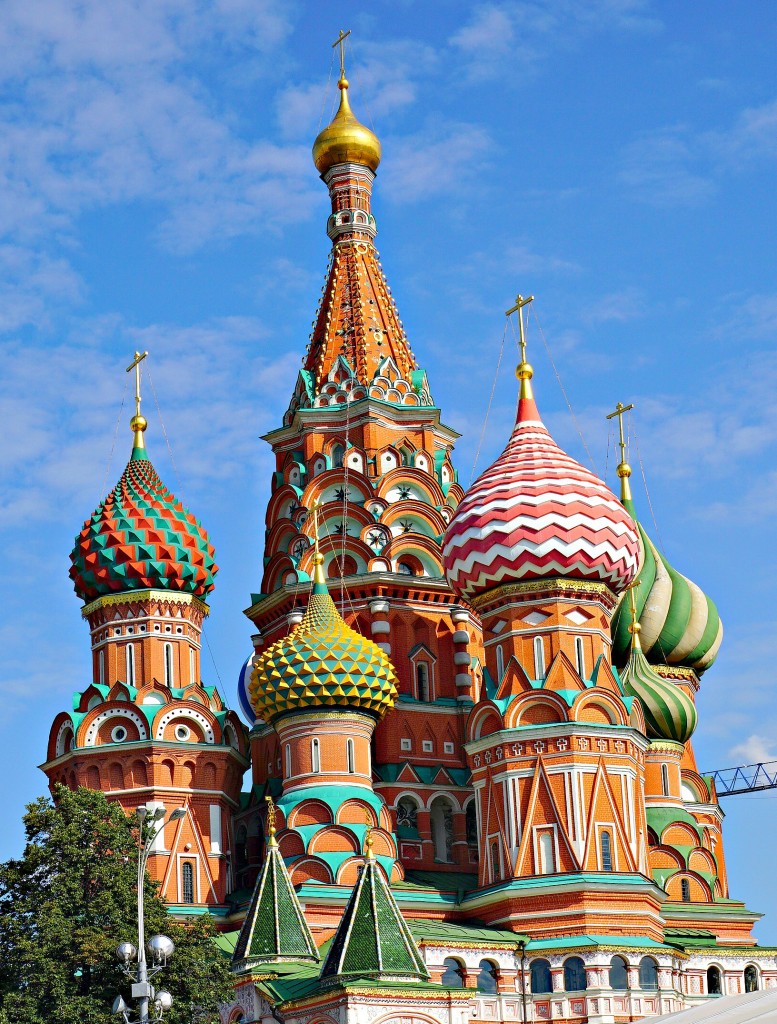 When we started planning and training for the seven day bicycling portion of the adventure, everyone either asked us if we were crazy or told us we were crazy.  Russia just isn’t on the travel radar for Americans right now, and bicycling in Russia isn’t either.  We found it to be very, very safe, and the people were warm and welcoming.  In the three weeks that we were away, we  saw just a few Americans.  Our bicycling friend Dan went along with us.  There were 18 people cycling, and we were the only Americans.  The others were from Germany, Austria, New Zealand, England, and Belgium.  We started out spending a few days in Moscow and seeing the sites like St. Basil’s Cathedral above.  There was a lot of construction and photos in Moscow were hard to get without a crane looming in the background.  Then we met up with the other cyclists. 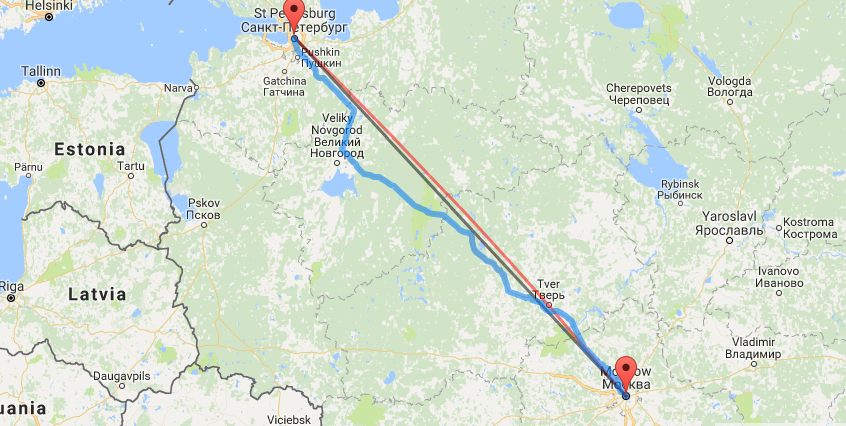 We booked the cycling portion of our trip through the Russian Cycling Club, and they were so kind and efficient.  They carried our luggage, provided water and snacks, booked our hotels and meals, and planned the route.  All we had to do was ride bicycles.  For the seven day tour, we averaged cycling 60 miles each day on bicycles that the company provided. It wasn’t a straight shot like the red line in the map above.  We detoured for site seeing and had to add mileage to get to our hotels which were off the beaten path.   Because of horrible road conditions and the remoteness of some of our lodging, they had to transport us in a van for a few hours most days. 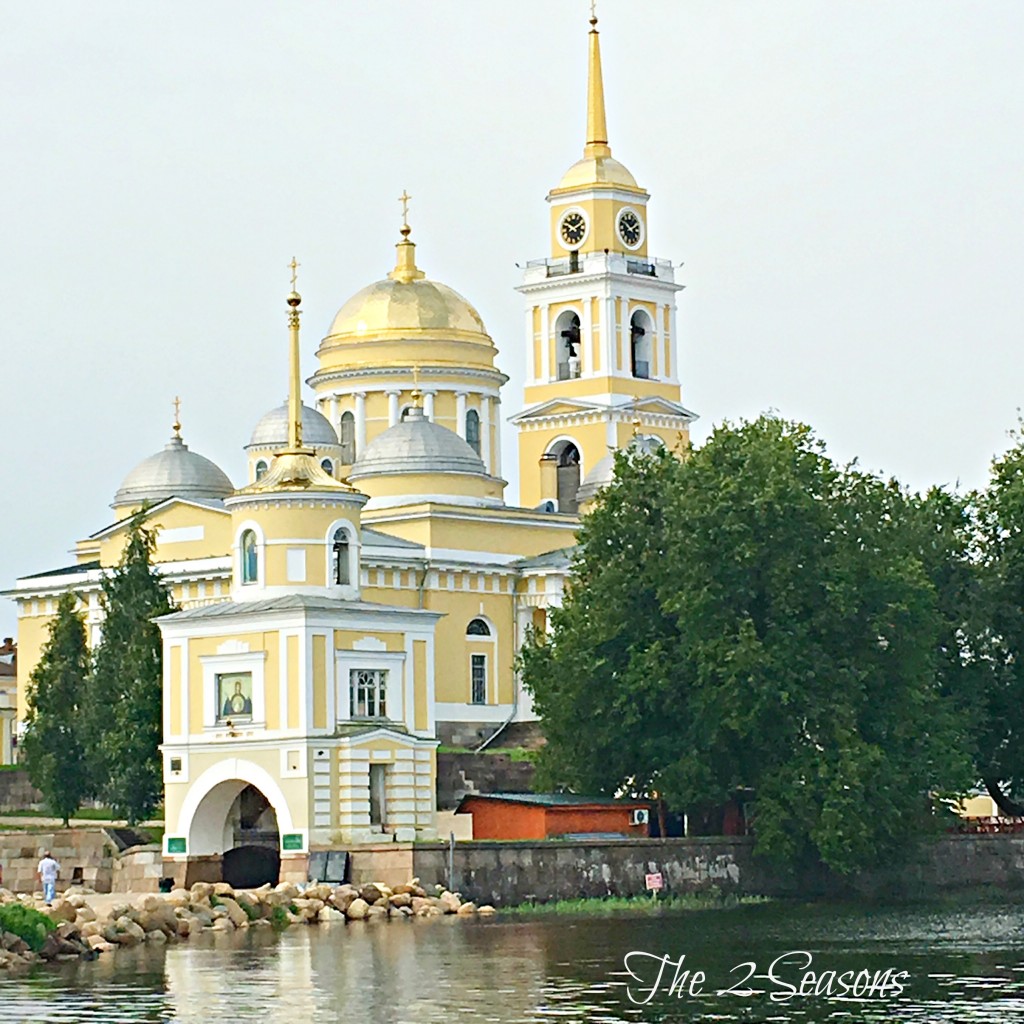 By doing that, we were able to spend time touring museums, cities, historic sites, and monasteries. Oh, and as far as the weather goes, it was uncomfortably hot in Moscow, but by the time we arrived in St. Petersburg, we were wearing several layers to stay warm. 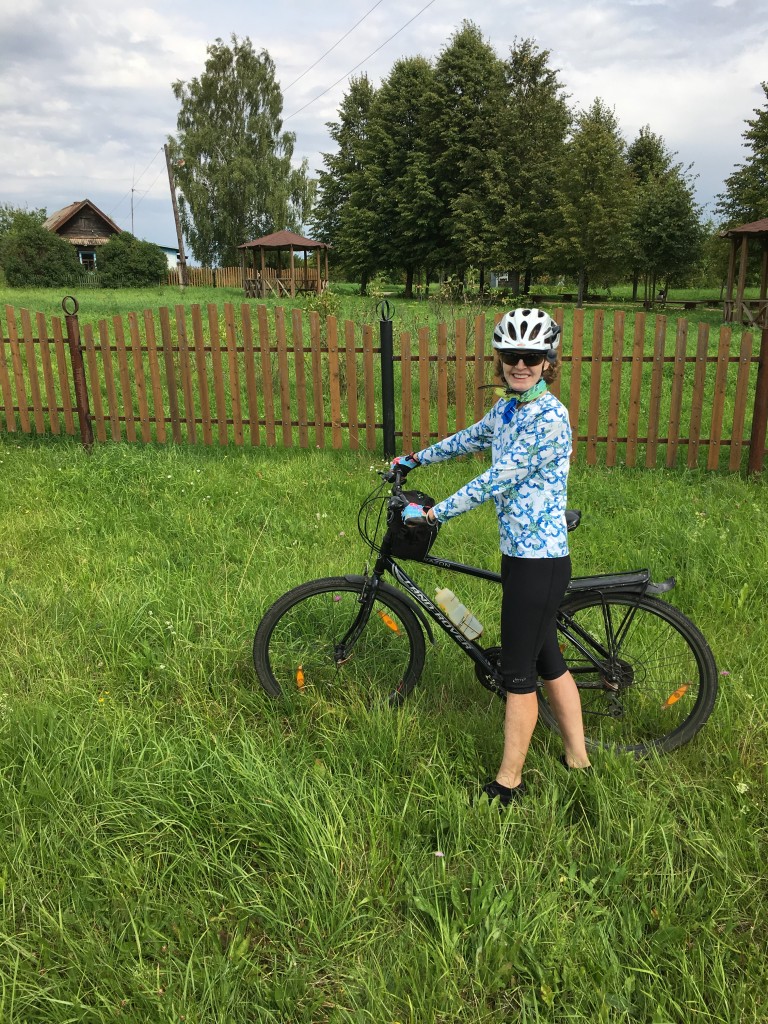 There’s not a lot going on in the area between Moscow and St. Petersburg.  There are not a lot of roads so traffic on main highways was pretty heavy.  We were kept bicycling on back roads that went through mostly small towns and villages.  The roads were often in horrible condition, and I mean horrible.  It made cycling very difficult and uncomfortable since our bodies were being jarred around for big portions of most days. 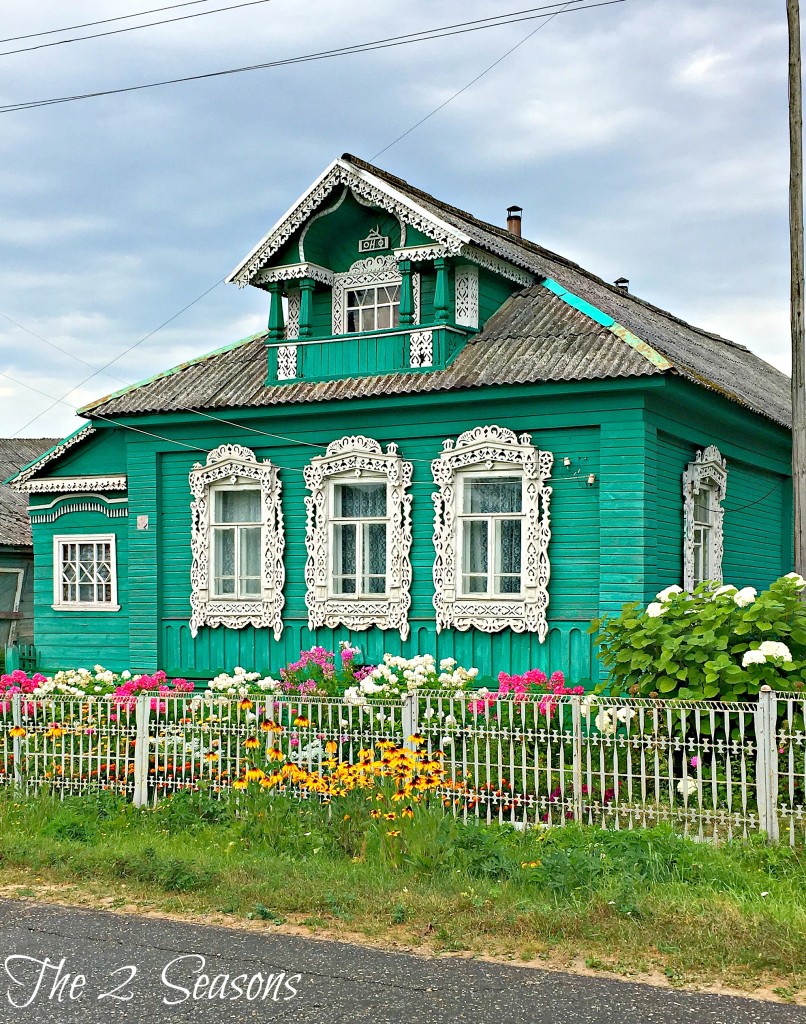 Lots of money is being spent on the Russian cities since infrastructure wasn’t a priority under the old regime.  Moscow was booming, and so was St. Petersburg, but the small towns in between looked almost desperate.  I asked myself many times what on earth do the people do to keep themselves occupied and fulfilled in those villages, especially on the long winter nights.  This is a typical farmhouse, but most farmhouses were not in good condition like this one. The architecture was similar, but they needed TLC like paint, structural help, new roofs, windows, etc.   If there were flowers, they were thriving because the long summer days and cooler temperatures helped.  I have to tell you that when I stopped to take photos, someone from the houses came out and scolded me.  They did not want photos taken.  I think it’s paranoia held over from the days of an oppressive government. 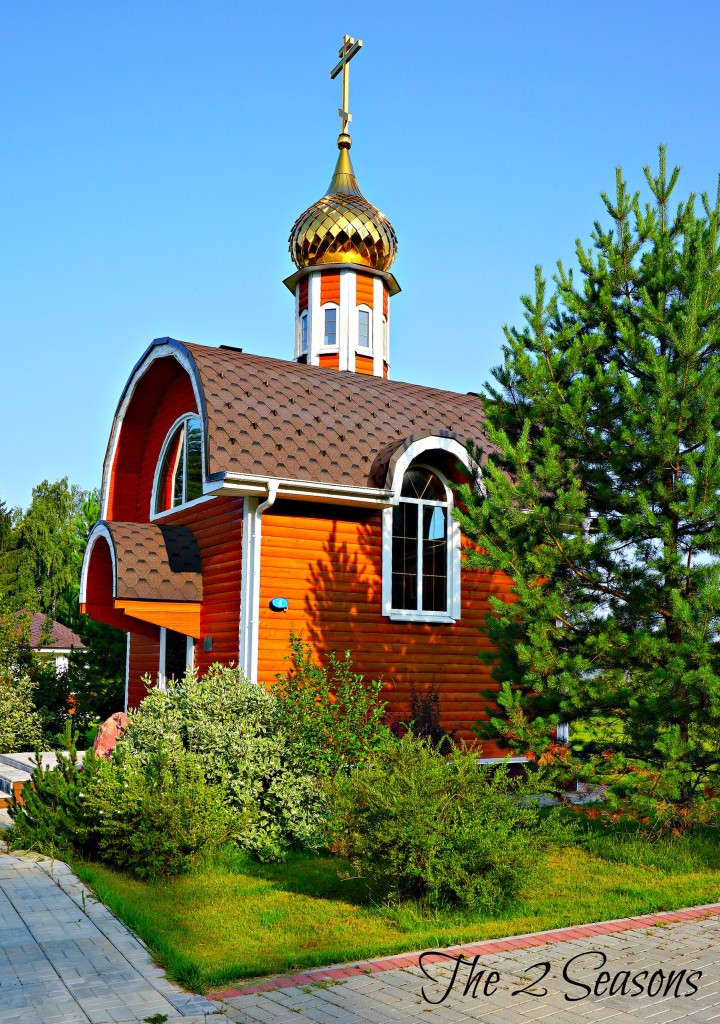 Most of our overnight accommodations were wonderful.  We could be on a horrible small country road, and then all of a sudden there was a farm that had a lodge, restaurant, recreational activities, sauna, bar, CNN, and more.  This little chapel was on the grounds of our first country lodge. 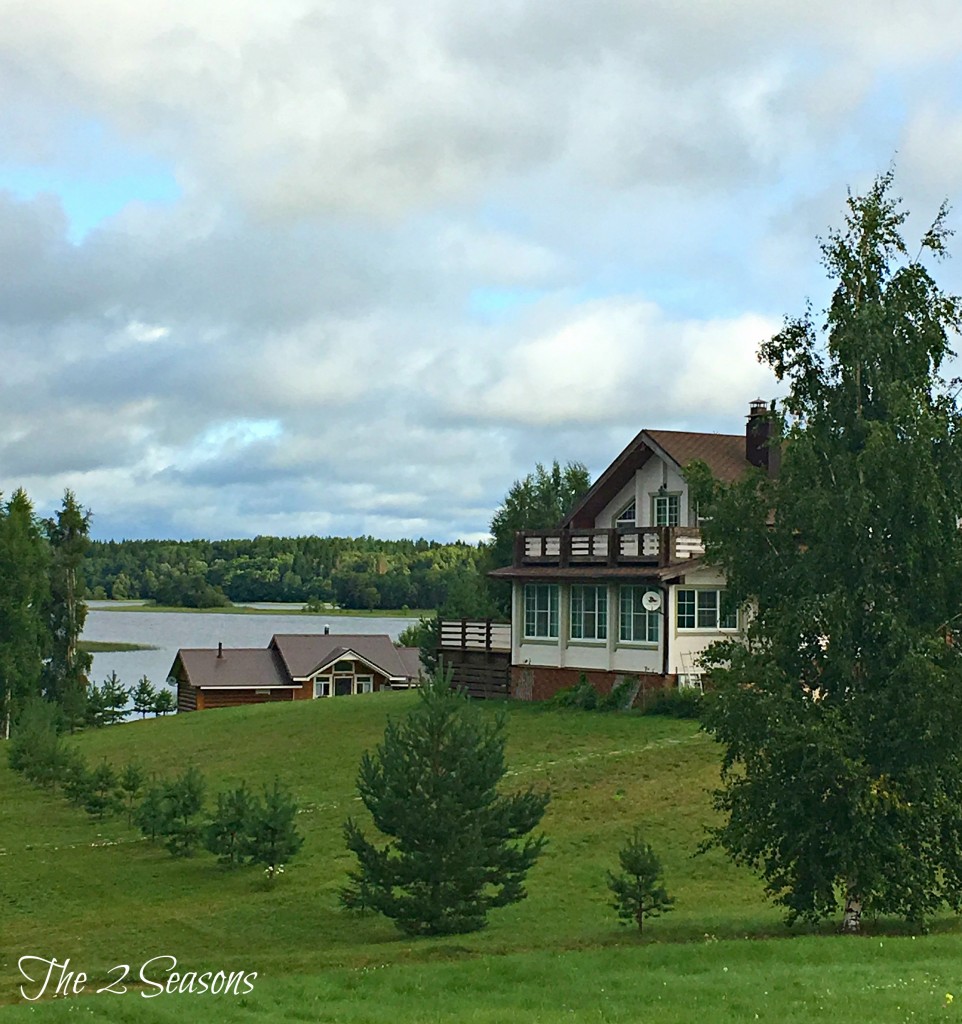 This lake was our view in another country lodge.   We stayed in small cities a few nights, but I liked the country accommodations better. 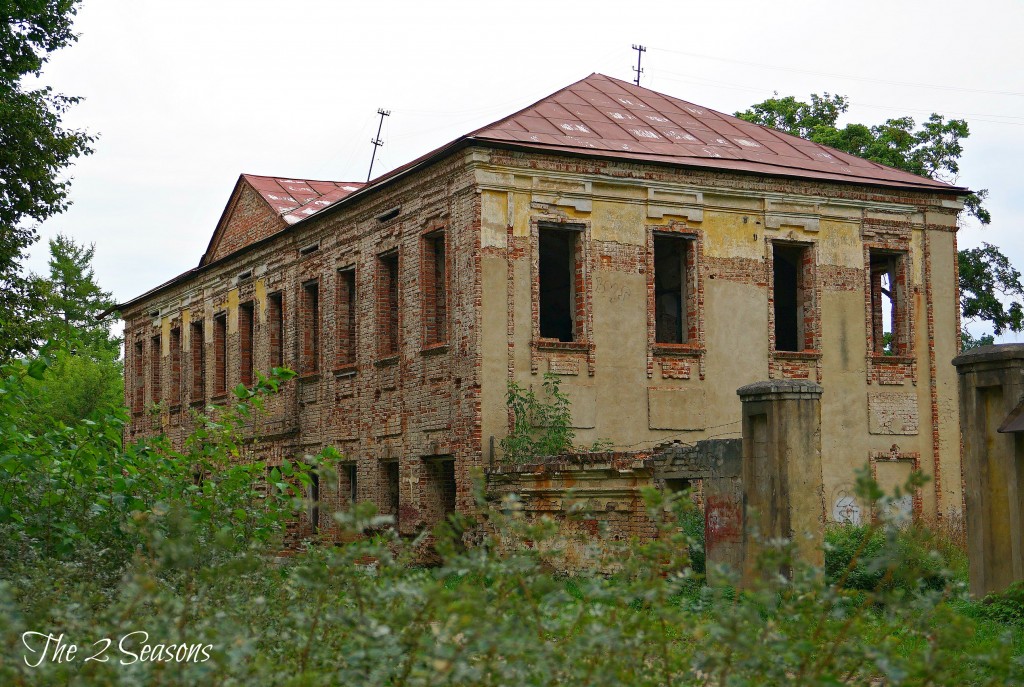 We often saw abandoned buildings like this one, and I enjoyed seeing them.  I loved how rustic they were and wondered about their history.  Money was scarce during the previous regime, and they just couldn’t afford to take care of structures. 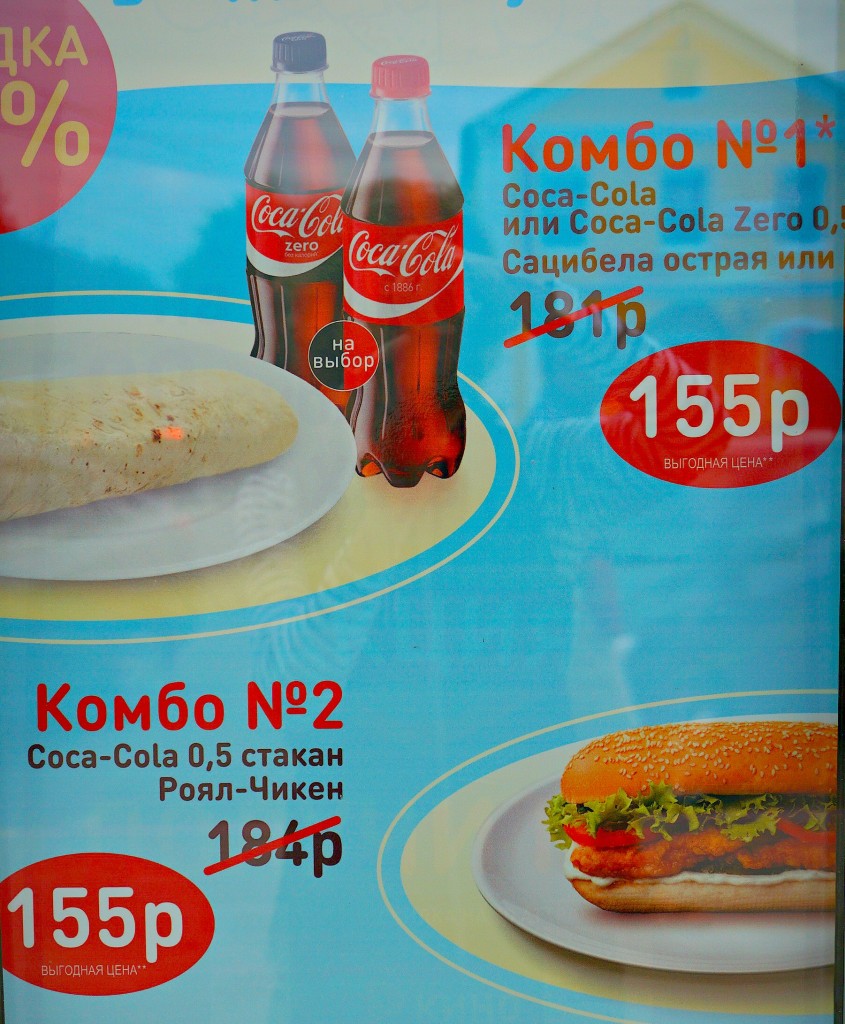 We saw some American products like Starbucks, McDonald’s, Dunkin Donuts, Coca Cola, Subway, and Burger King.  We avoid American foods  when we travel so we can experience what the locals eat.  Our food was good.  We had a lot of chicken, soup, salads. 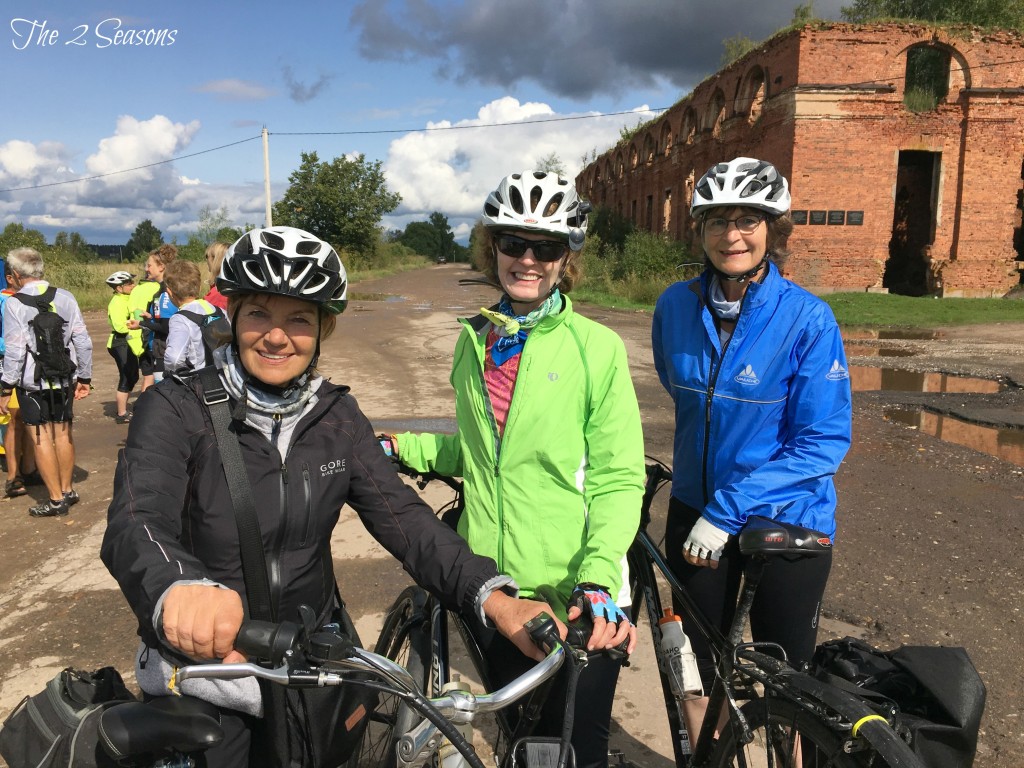 These two were my bicycling friends, and we rode together a lot.  The one on your left is from Austria, and the one of your right is from Germany.  We called ourselves “The Old Ladies”, and we had the best time.  Even though we are from different countries, there’s always the common bond of doing an adventure in a foreign country.  I have never had trouble forming good friendships with other women when traveling.  It’s such a wonderful learning experience.

After the bike trip ended, we spent a few days in St. Petersburg, and then we headed to the Baltic States.  I will be sharing posts about those parts of  our journey starting with St. Petersburg next week.

Bicycling in France and Belgium