If you read this post, then you know that Mr. Right and I recently returned from two weeks in Thailand and Laos.  You also know that we were there to join up with a group of friends from Singapore to build a much needed school in a small mountain village in Laos.   I hope you stick around and read this entire post and the next one that I will be writing about our trip. This story proves that anyone can make a difference.  A couple I know was on a road trip in Laos, where there are very few highways.  They were driving through a small village in the mountains six hours from Vientiane, which is the capital city.  The wife asked her husband to pull into a little driveway so she could see the local elementary school.  What she saw appalled her so much that she cried.  Her husband had been on several volunteer vacations (including one we led in India), and she asked him to do something about the school, and that’s how this project started. 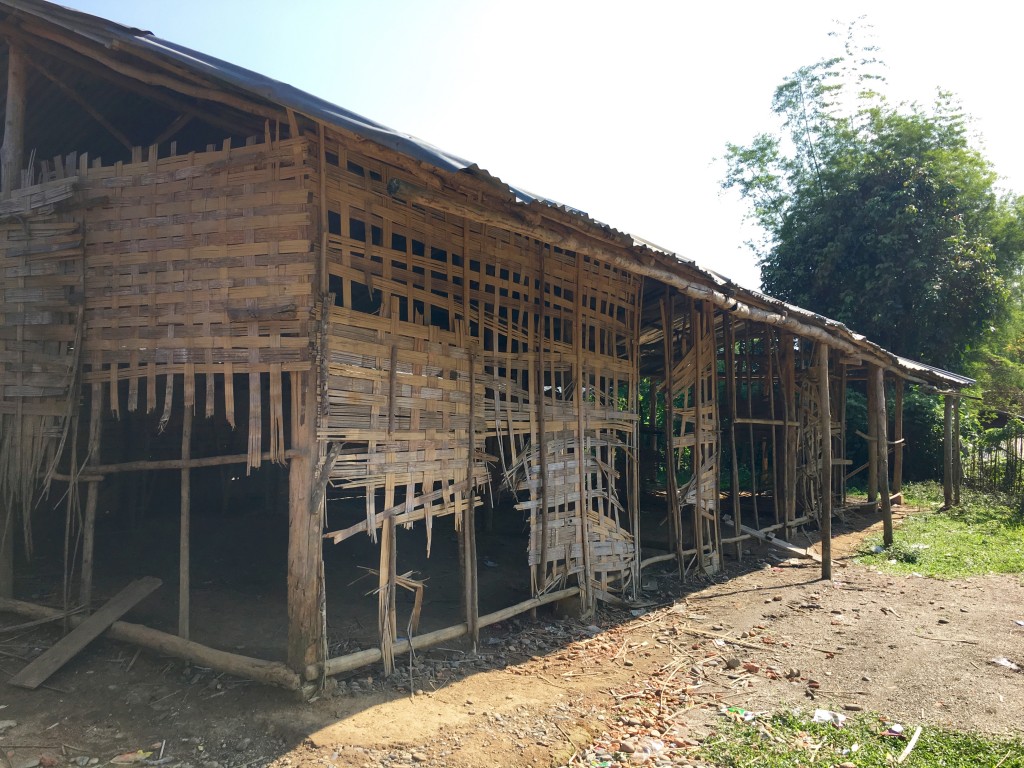 This is the school she saw.  They promised us that this will be torn down when the new building is ready. 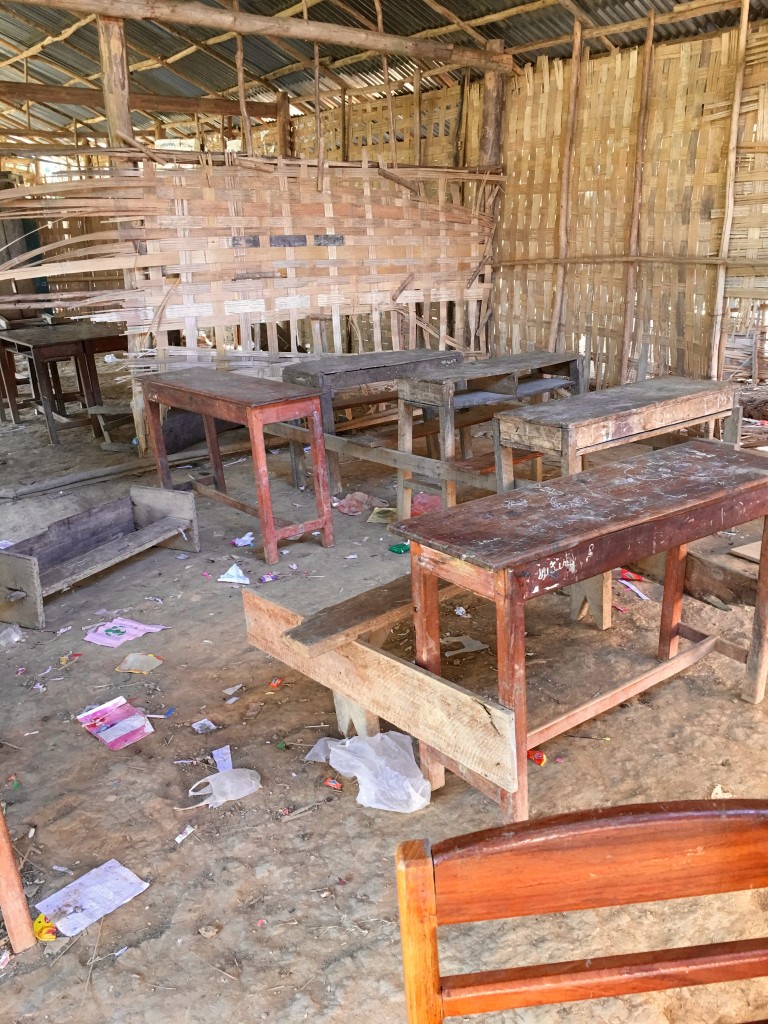 Although the other elementary students were taught in a nice concrete building, this was the classroom for the kindergarten class.  Would you want to send your child or grandchild to learn in this school? 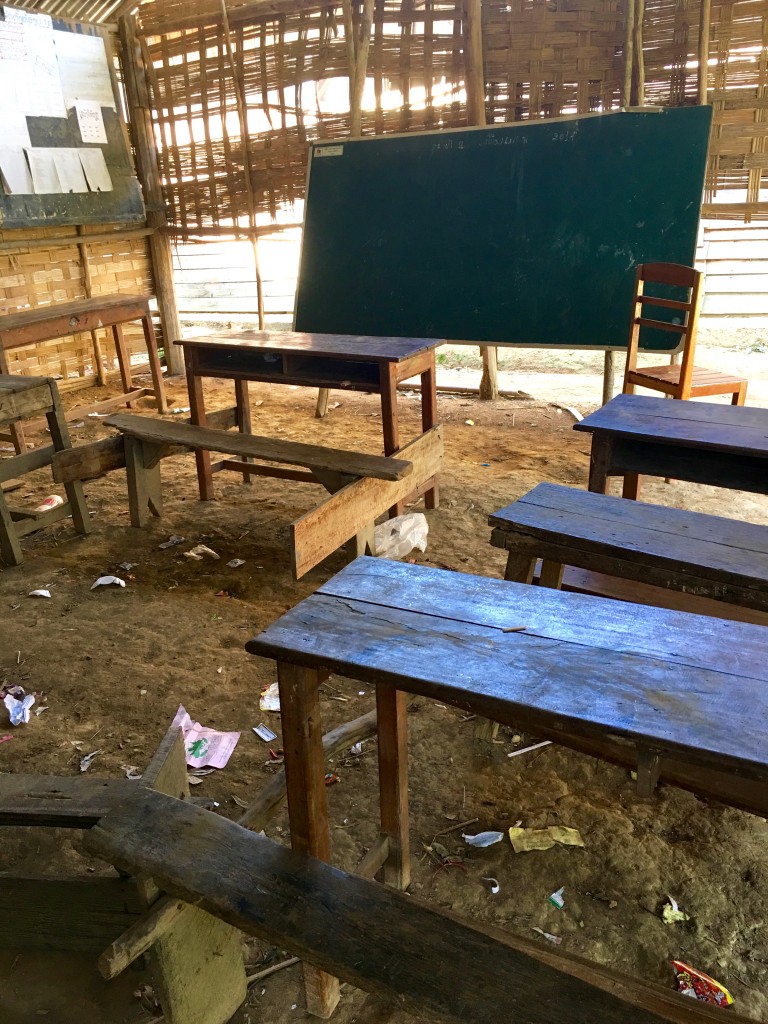 I know your answer would be no, and that was the answer the village parents would have given.  However, they didn’t have any money to build a new school. 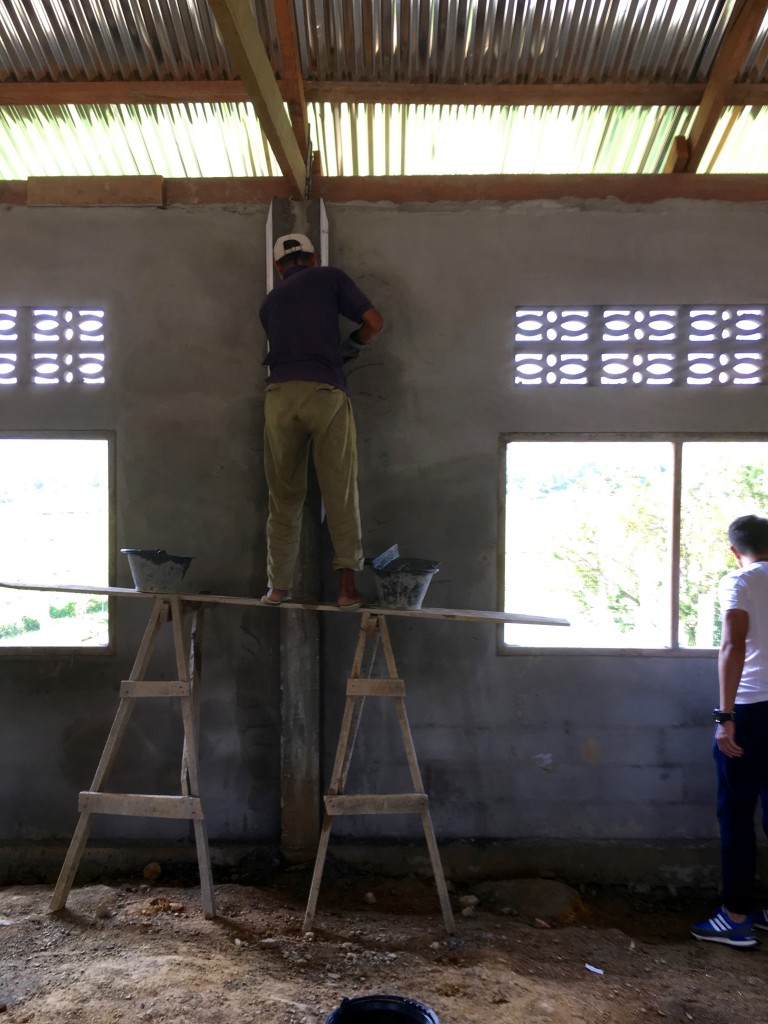 Our friend Raymond, whom we mentioned in the Thailand post, gathered a group of 20 of his friends, including us.  They raised $16,000 and sent it to the school.  They got started on the building, and when we showed up on the day before we were to begin work, they had gotten this far.  They had four classrooms under roof.  The people are hardworking and honest people, but they are poor.  The little children were so dirty, too. 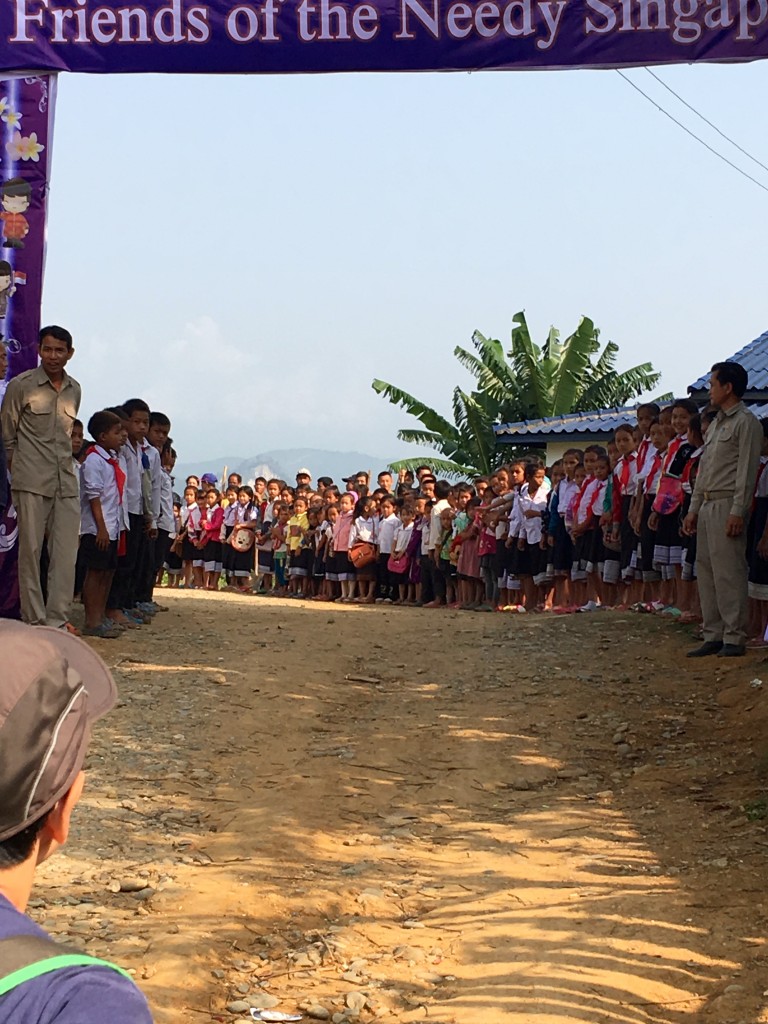 Despite the fact that our first work day was a school holiday, all 300 children came to school to greet us, and they erected a sign to welcome “Friends of the Needy – Singapore.”  I was bawling as I walked past the children.  Thank goodness for sun glasses. 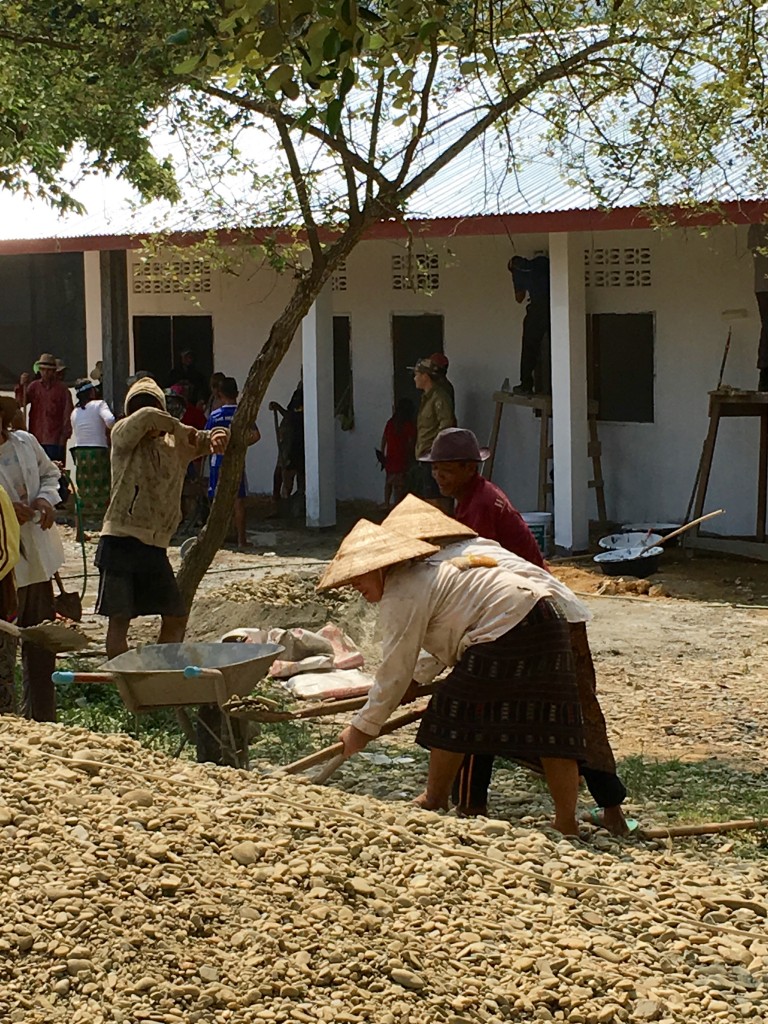 The week we were there, the dirt floors were turned into concrete floors, the dirt walkway was paved, and the entire building was painted inside and out. Our group did the painting, and the locals did the hot concrete work all by hand.  We also painted the existing school  The locals worked so hard in 90 degrees plus, and some of the women had babies strapped to their backs.  Mr. Right’s and my contribution to the project was a playground. 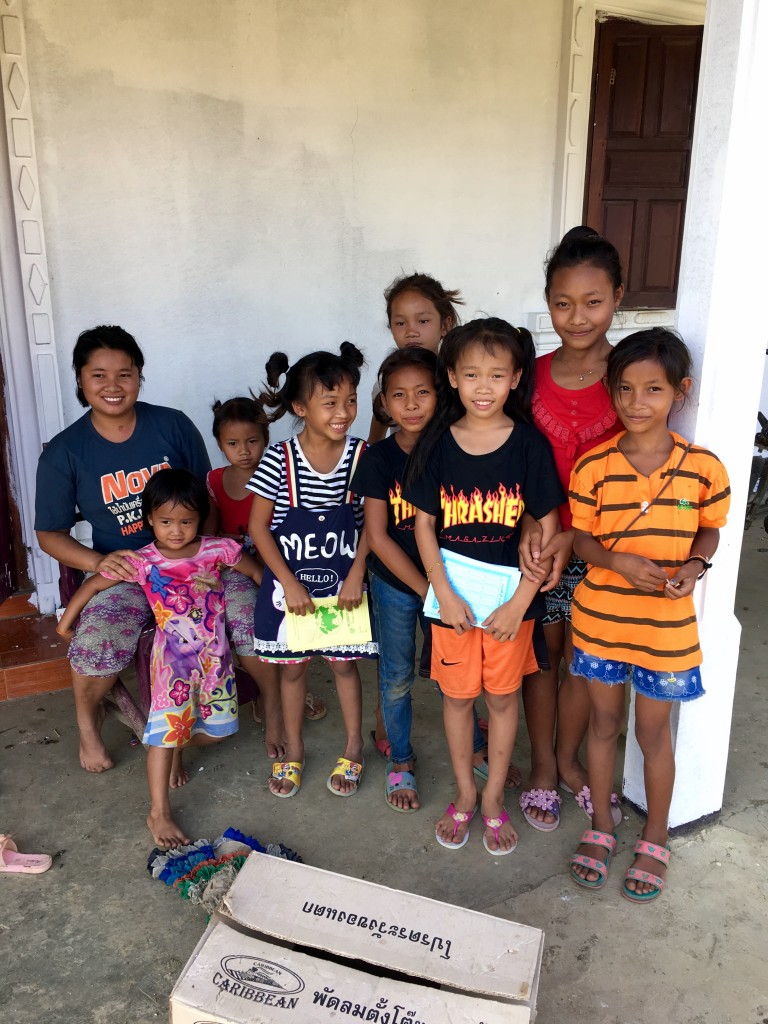 Now, I want to show you some photos of the children who attend the school.  I am not doing this to exploit them in any way.  I just want you to see their sweet faces. 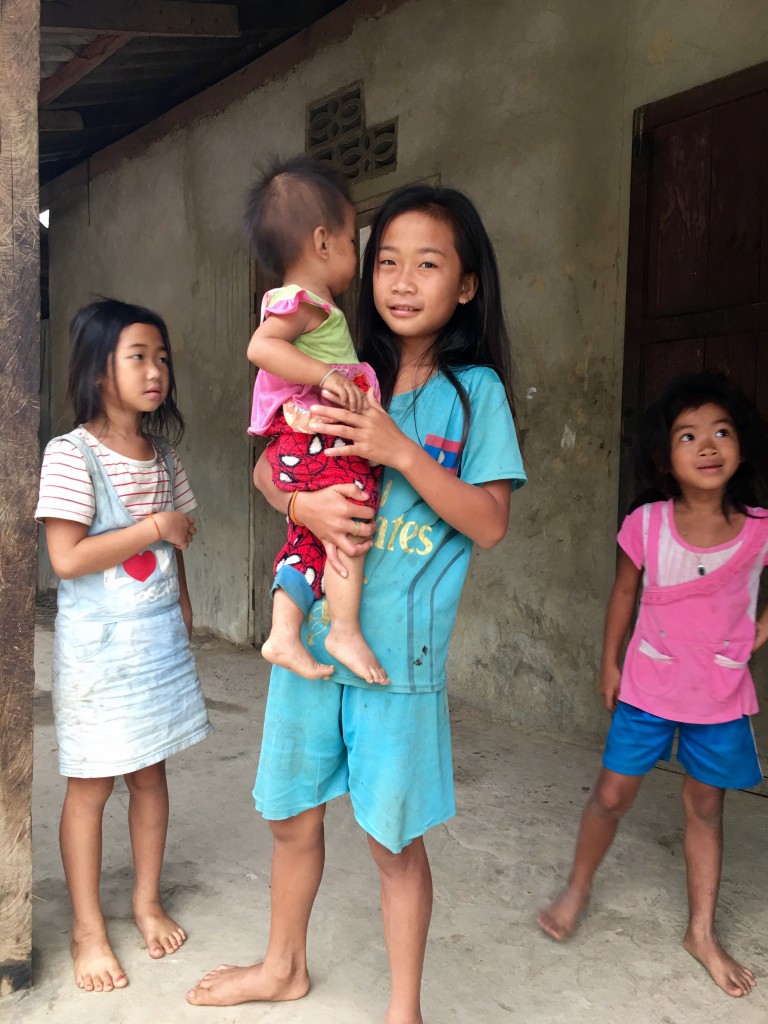 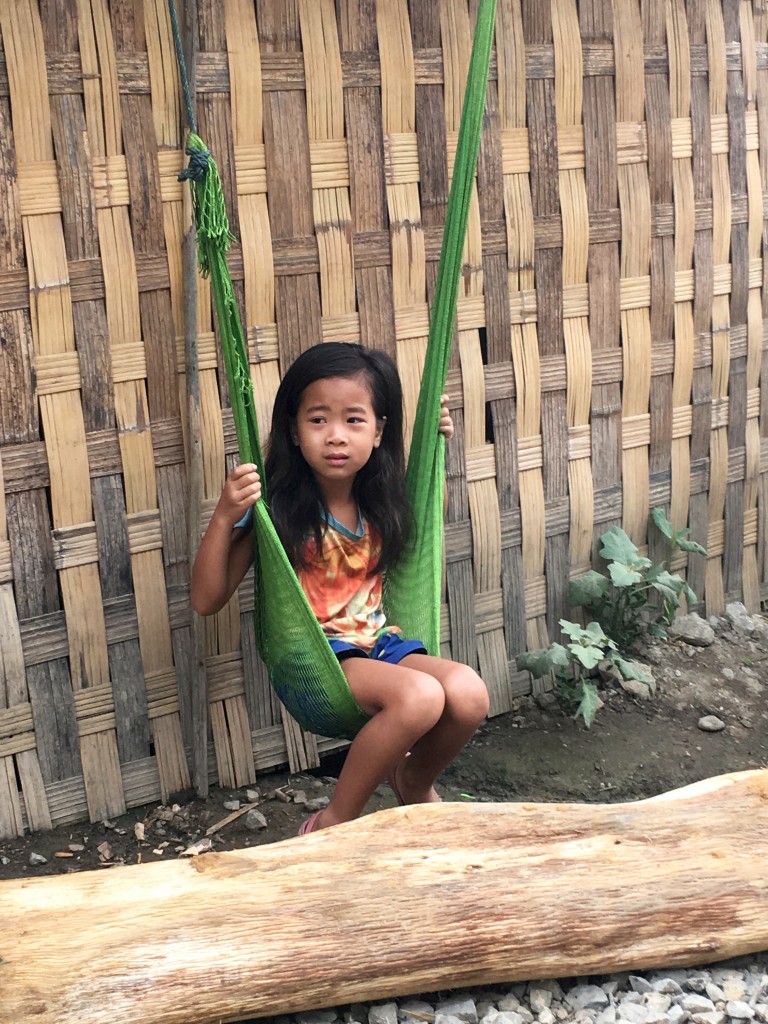 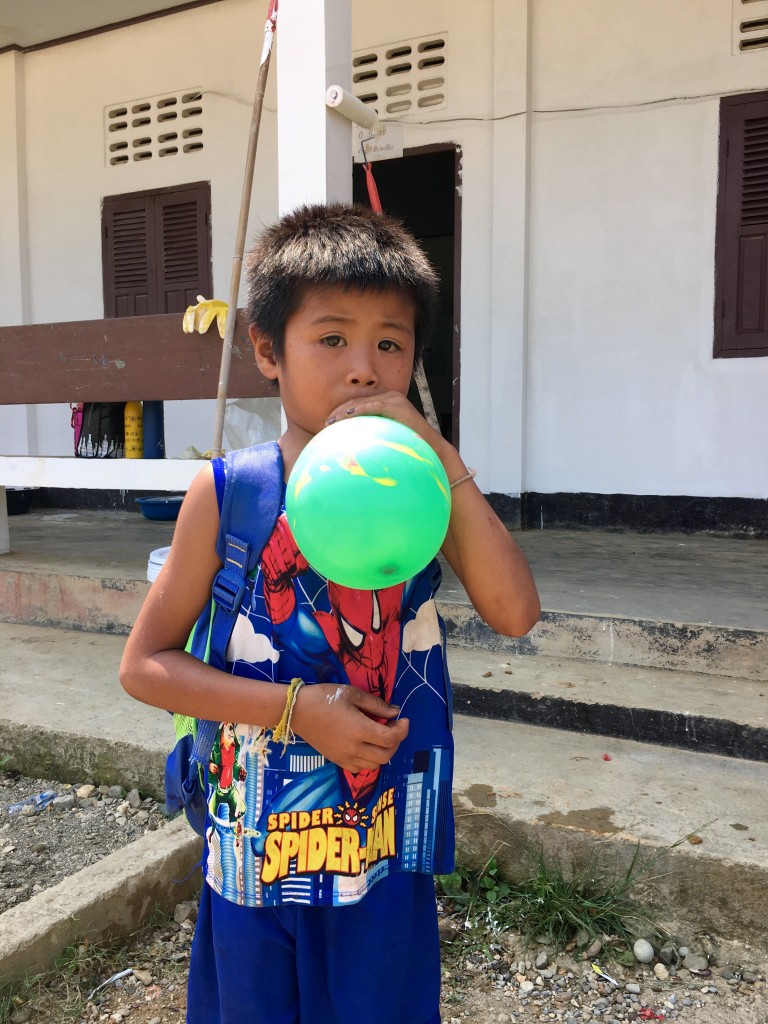 He’s blowing up one of the balloons we took. 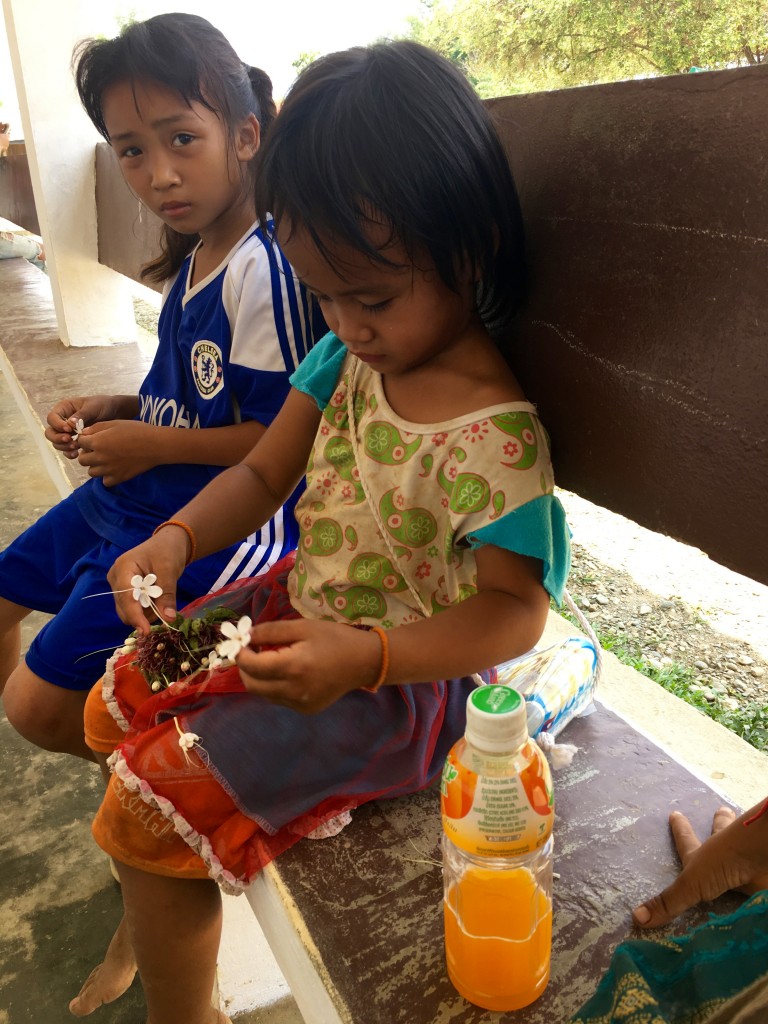 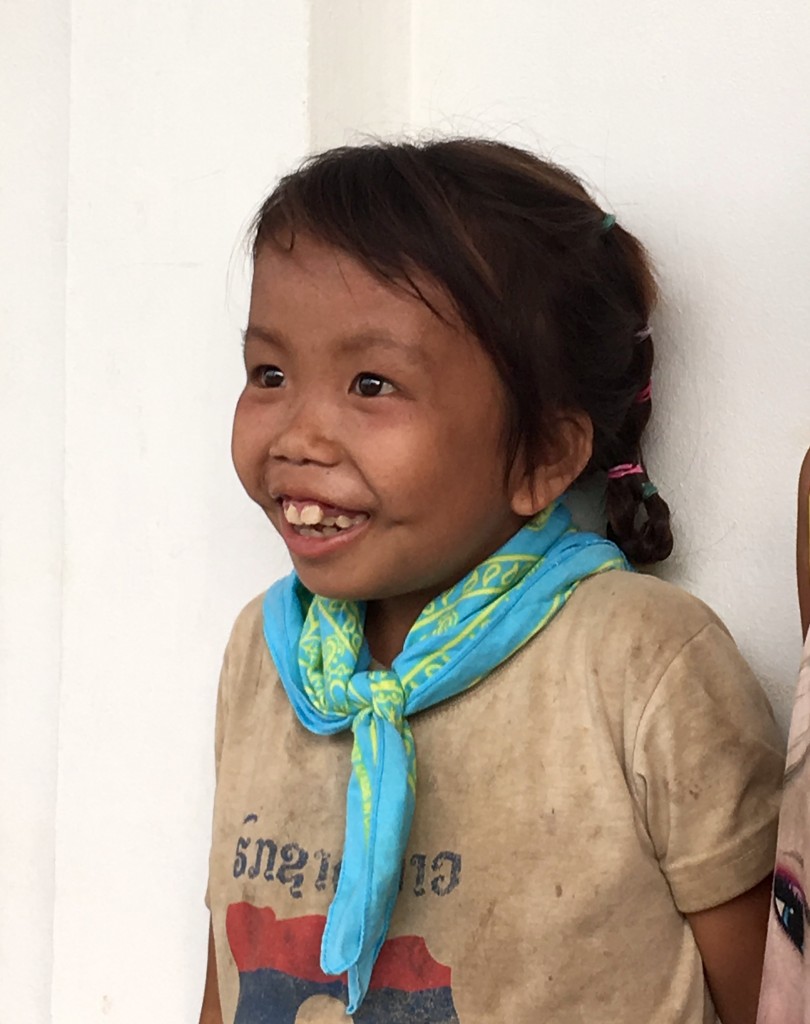 She was my favorite.  Just look at her eyes.  She had the most beautiful, outgoing personality.  I gave the bandana to her on the second day, and two days later, it was just filthy.  She didn’t care.  I wanted to put her in my suitcase and bring her home. 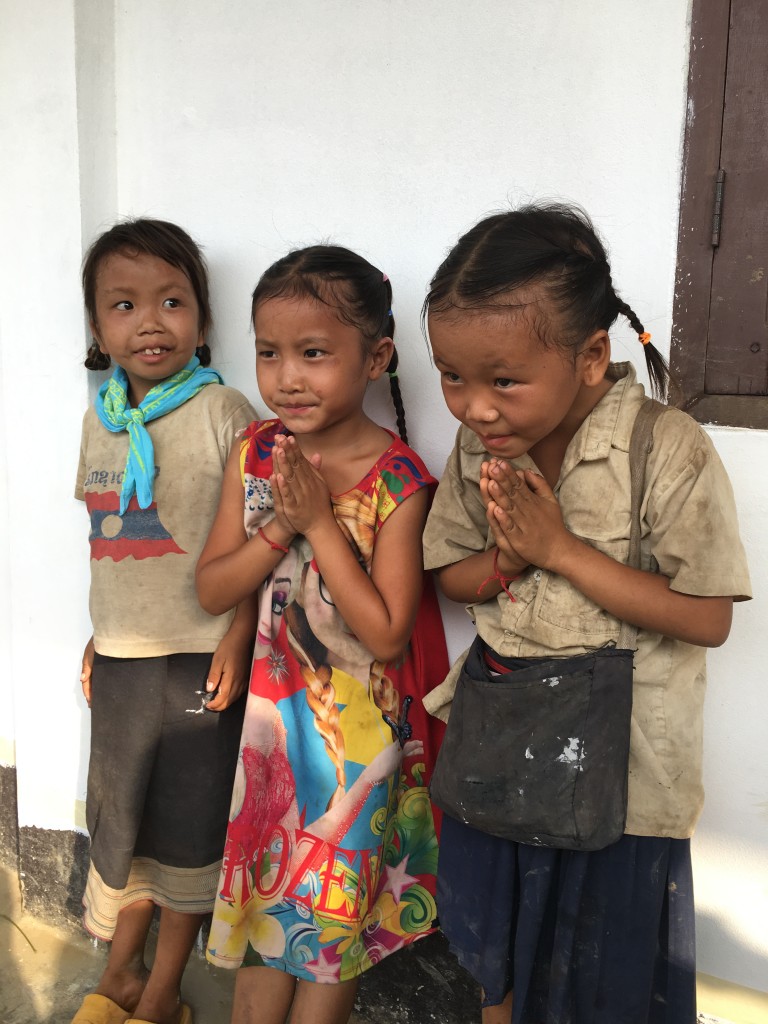 We played beauty shop on a few afternoons and braided their hair.  They loved that. 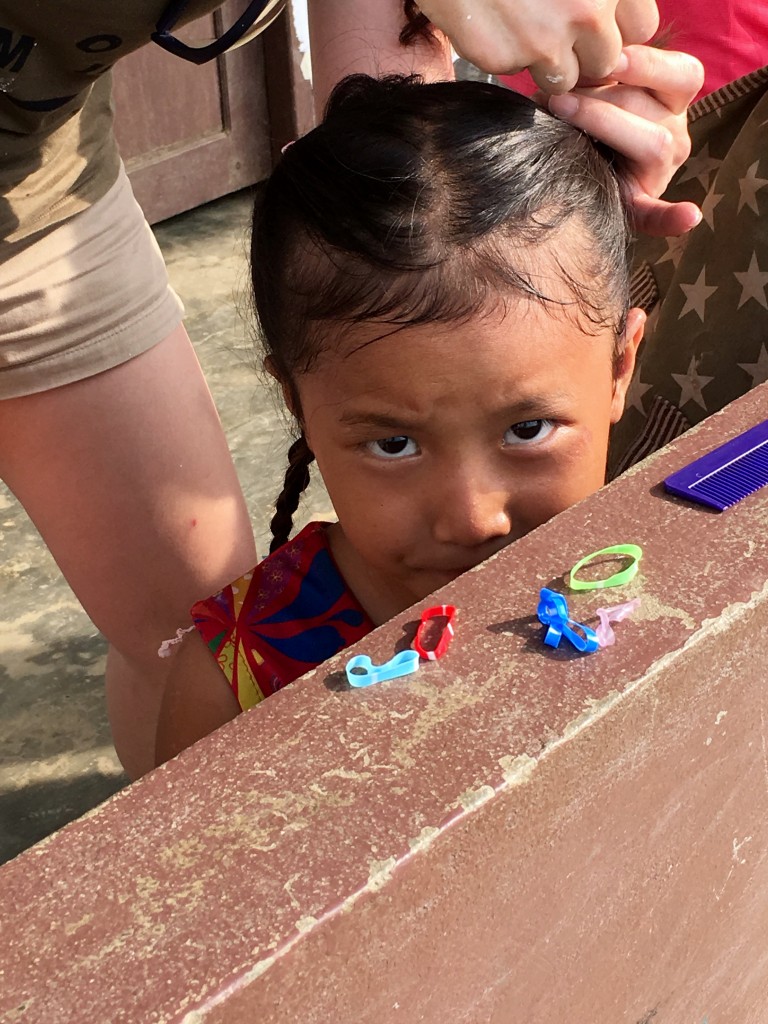 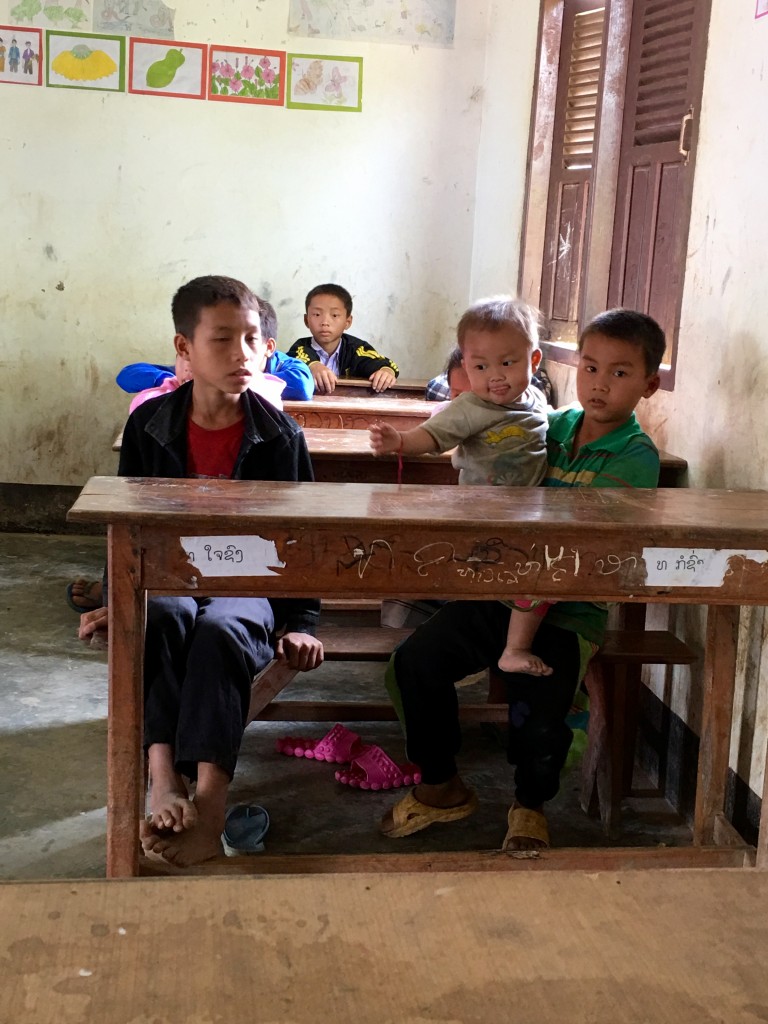 Our group also taught the children songs and worked on their English.  I taught some how to play dominoes, and they loved it.  The little boy on the right is babysitting his little brother while he was in school.  His mother was working on the concrete. 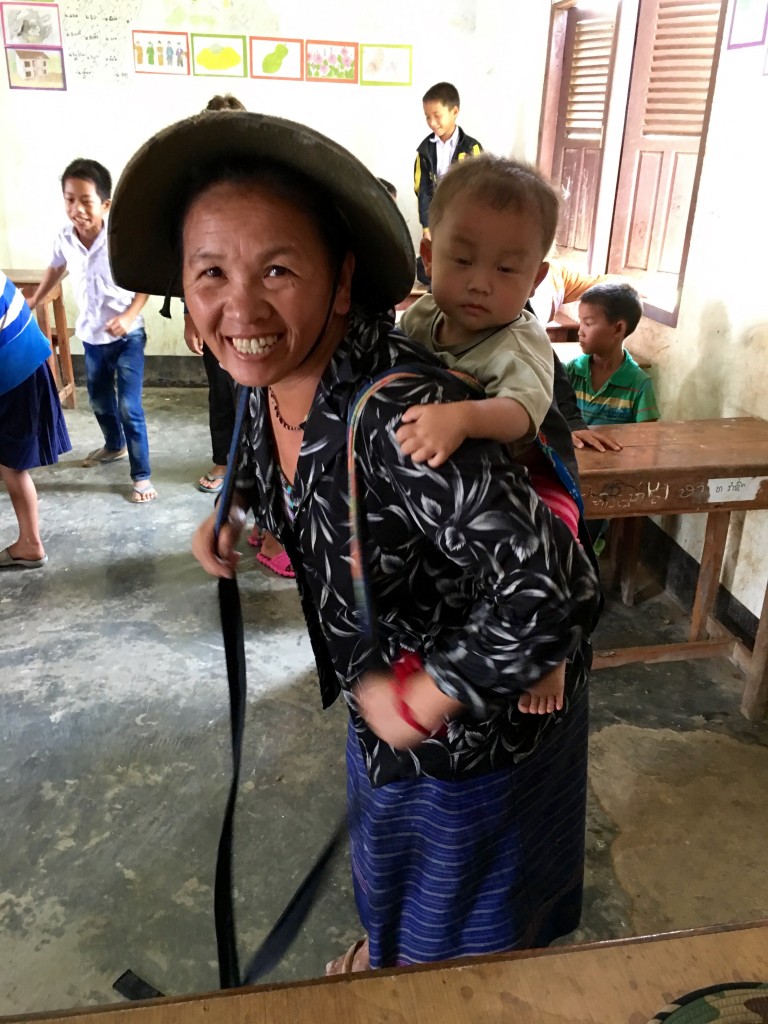 Look at her smile.  The children and their families are loved and happy.  This is what they know, and we sure don’t try to place our needs and values on them. 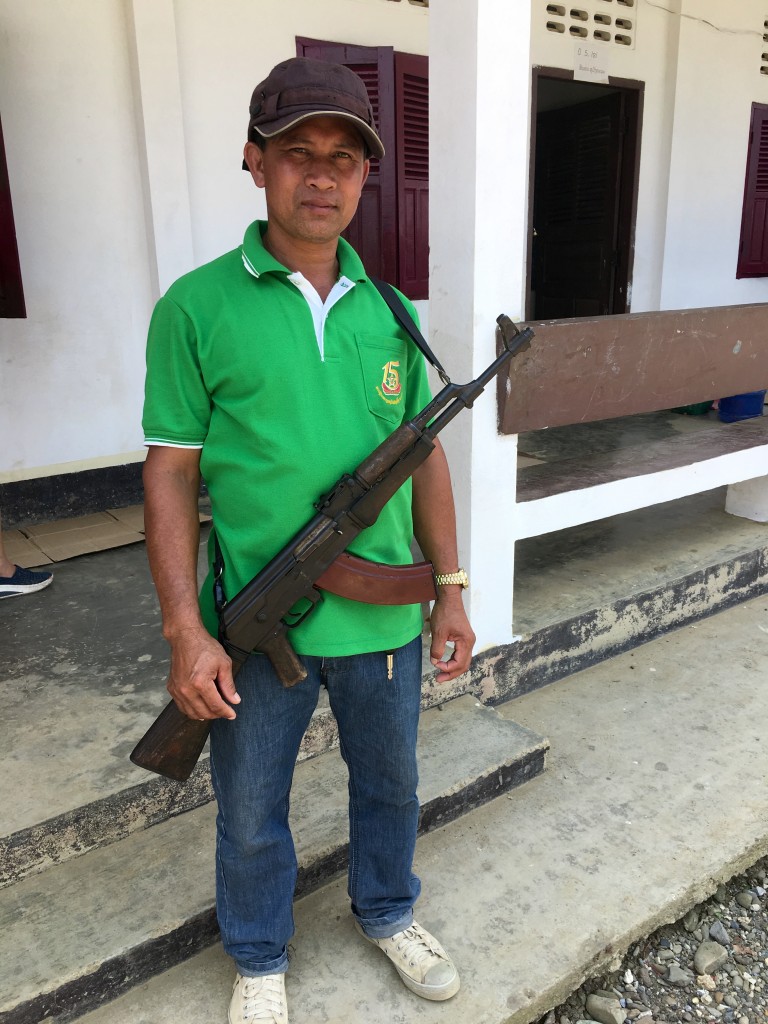 Oh, and I want you to see the security guard.  He carried an AK47.  I was horrified, but they wanted to protect us.

I’ll do another post to show you the final reveal of the new school, the  playground, and more.  Thanks for reading this.

Our Trip to Peru