Mr. Right and I just returned from a two-week trip to Thailand and Laos.  How this all came about is kind of a long story, but I will try to be as brief as possible.  We have six Singaporean friends who have joined us a few times on our annual  volunteer vacations.  Our friend Raymond has usually been the coordinator to get things arranged so they could join us.  Well, Raymond also leads several groups of his friends each year to a developing country near them in Southeast Asia to do their own volunteer projects.  They have built water wells, houses, etc. just like our group.  Last year I mentioned to Mr. Right that we should join Raymond and his friends on one of their builds, and Mr. Right told me to contact Raymond.  I did, and he replied that they were building a school in Laos in April.  We said that we would be there.  Laos is far, far away, and there’s is an 11 hour difference in time as in when we are going to bed, they are getting up.  Mr. Right and I decided to stop in Bangkok on our way to Laos so that our bodies could acclimate to the new time difference a little, and we spent 48 hours there before flying on to Vientiane, Laos. 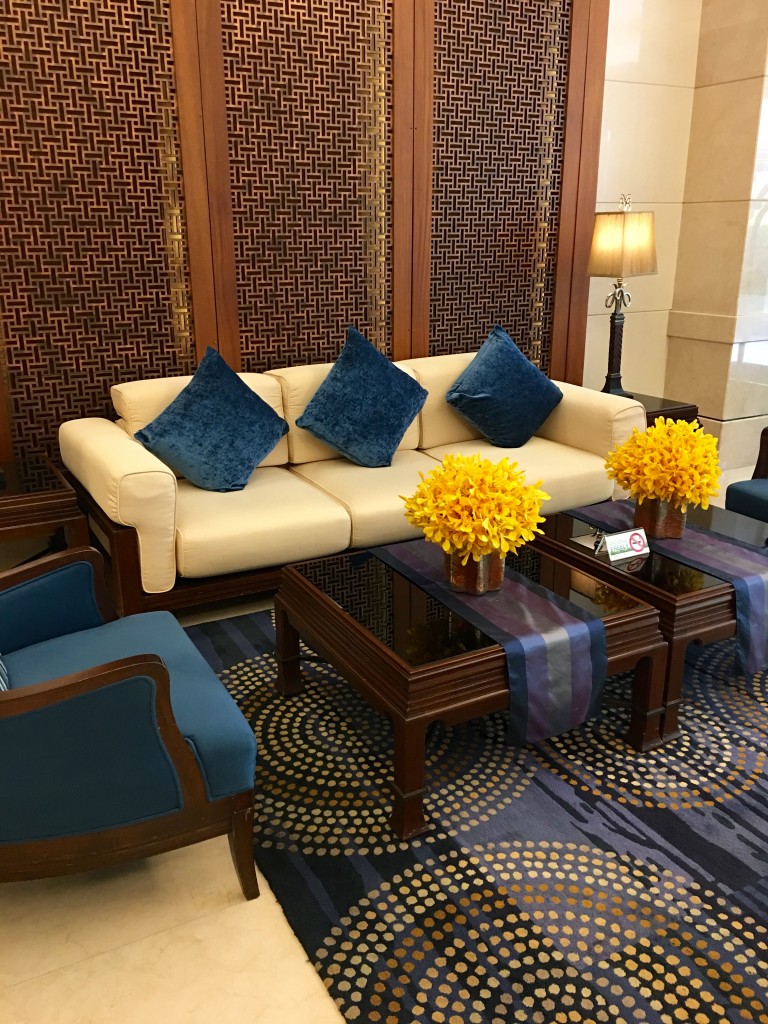 We have been to Bangkok two other times, and it was nice to get back.  Thailand has three climates – hot, hotter, and wet and hot.  We were there during the hotter season with temperatures hovering in the high nineties with the humidity about the same.  We arrived at our hotel lobby (above) at 1 a.m. which already threw our bodies into a tailspin.  Since the flights were so long, we were able to get some sleep but decided to just take it easy and take a walk the next day. 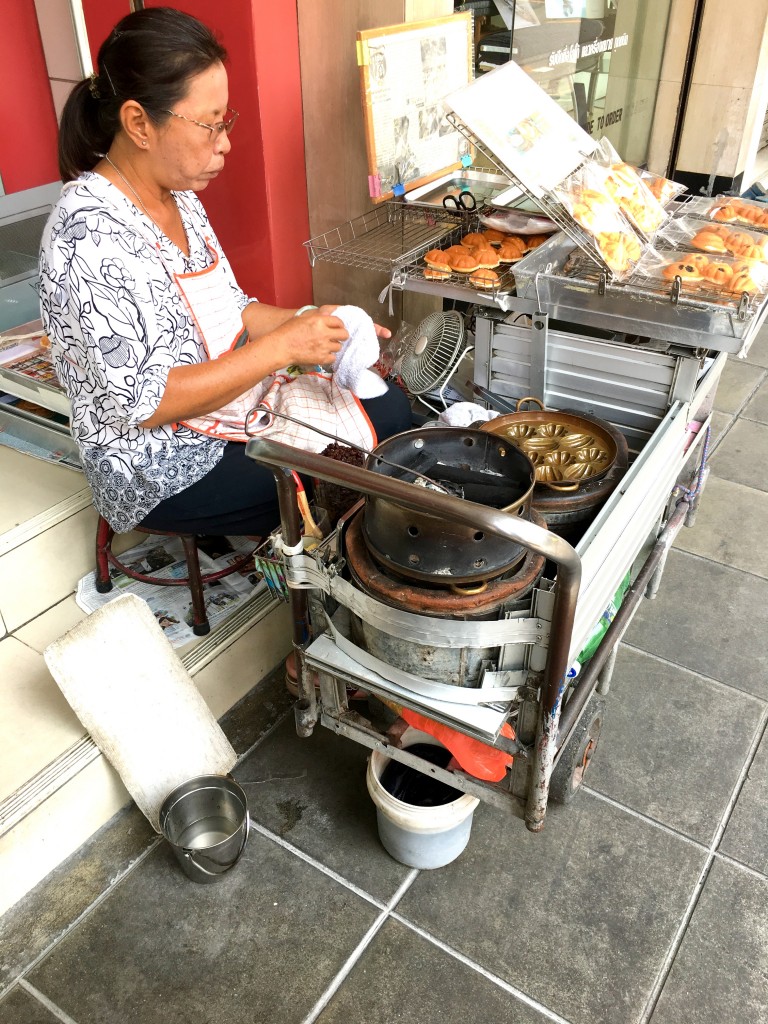 We have already seen the major sites and tourist attractions so we didn’t feel pressured to get out and see things.  However, we did take a walk on the first day.  It was sooooooooo hot, but there’s so much to see in Bangkok, even in a short while.  The side streets have lots of these make-shift restaurants and food carts that are really popular.  It’s amazing how they can whip up complete meals on these things. 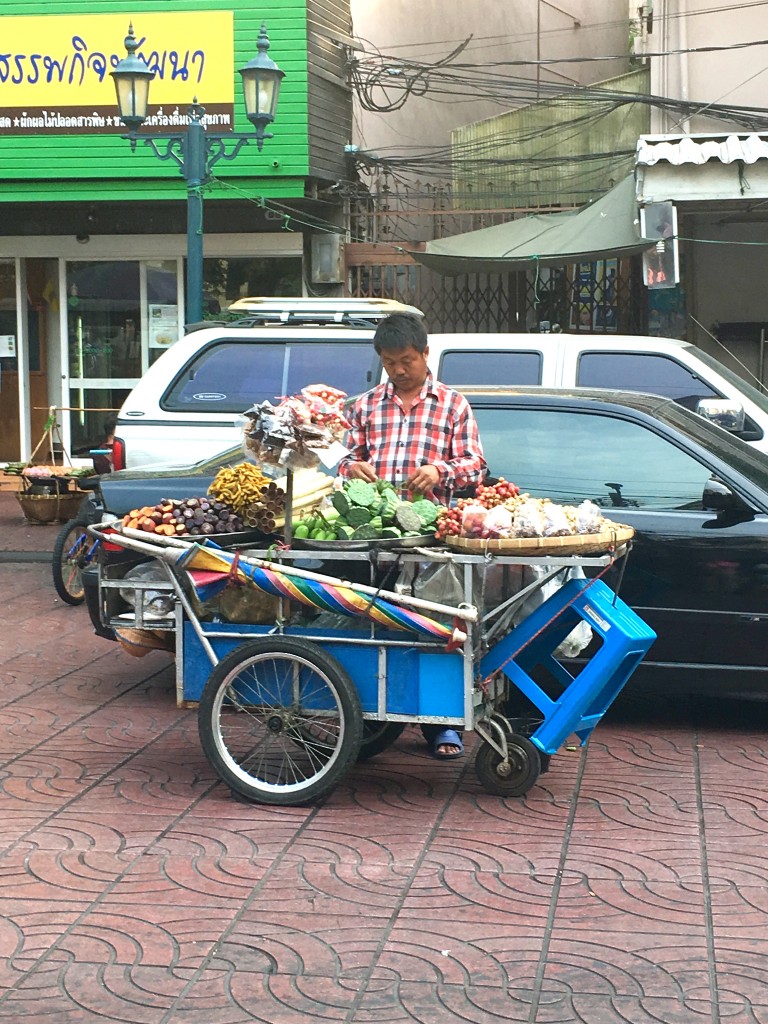 There’s color everywhere in all forms.  This man was on his way to set up his fruit and produce stand for the day. He has his seat and his umbrella attached to the side.   The city is loaded with energy. 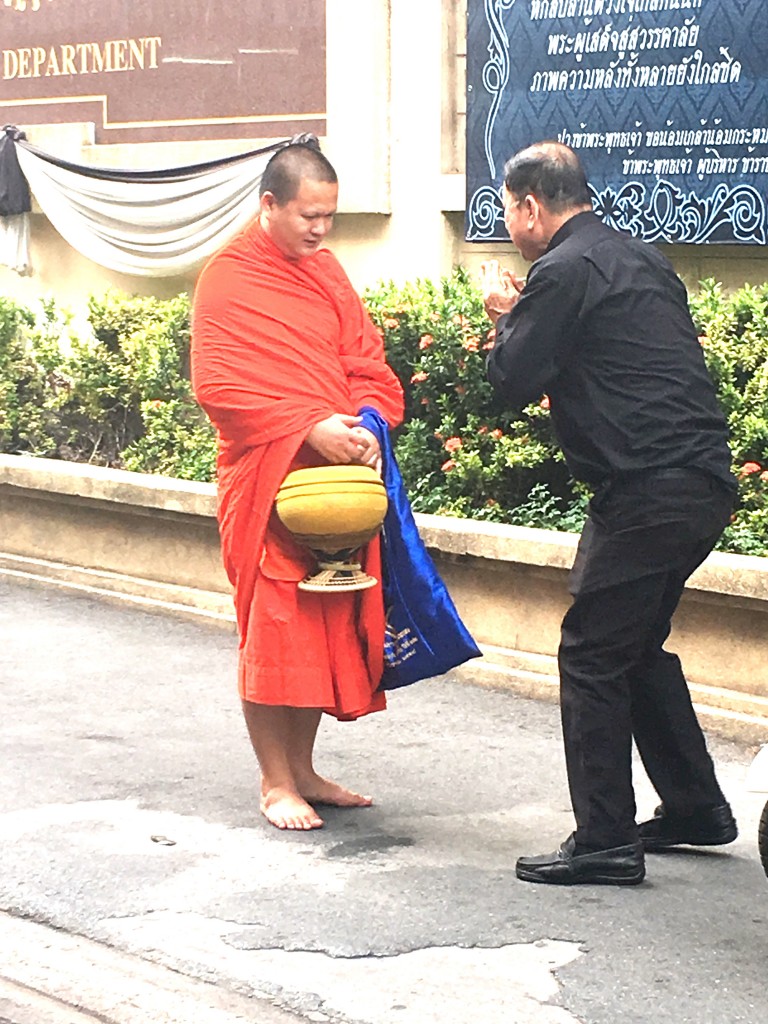 Every morning the monks collect alms, usually at 5:30.  This was later in the morning, but a gentleman stopped this monk to give him some money and ask for a blessing right on the street. 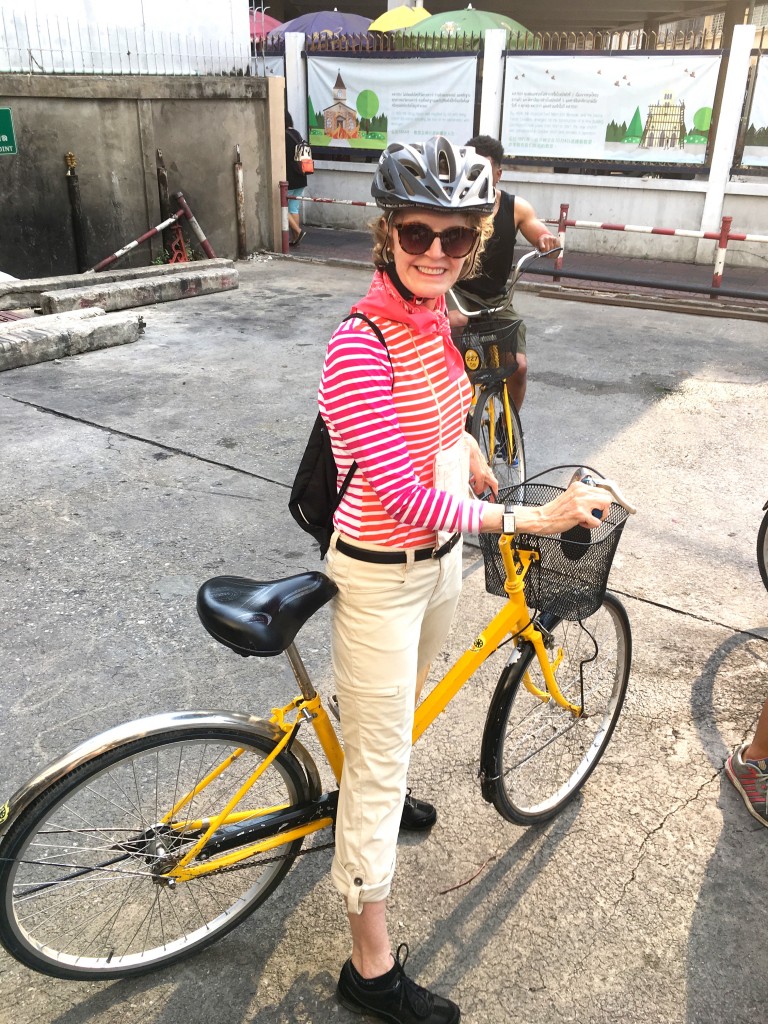 The next day we decided to take a three hour bicycle tour.  A few years ago, we took three-week bicycle tour from Saigon, Vietnam through Cambodia to Thailand, but we didn’t actually bicycle in the city of Bangkok.  The tour leaders felt the crazy traffic would just be too much for us to maneuver.  This mini-tour, though, was in and around the Chinatown section of Bangkok, and it was wonderful.  We love to get off of the beaten path when we travel (you have probably figured that out by now if you have kept up on our travel posts), and this gave us that opportunity.  We rode through some shopping and residential neighborhoods and saw Bangkok behind the scenes. If you follow us on Instagram, then you have already seen this photo.  What you can’t tell is that I was completely soaked from the heat.  Southern girls don’t sweat – we glisten.  Well, I was glistening like you wouldn’t believe!!! 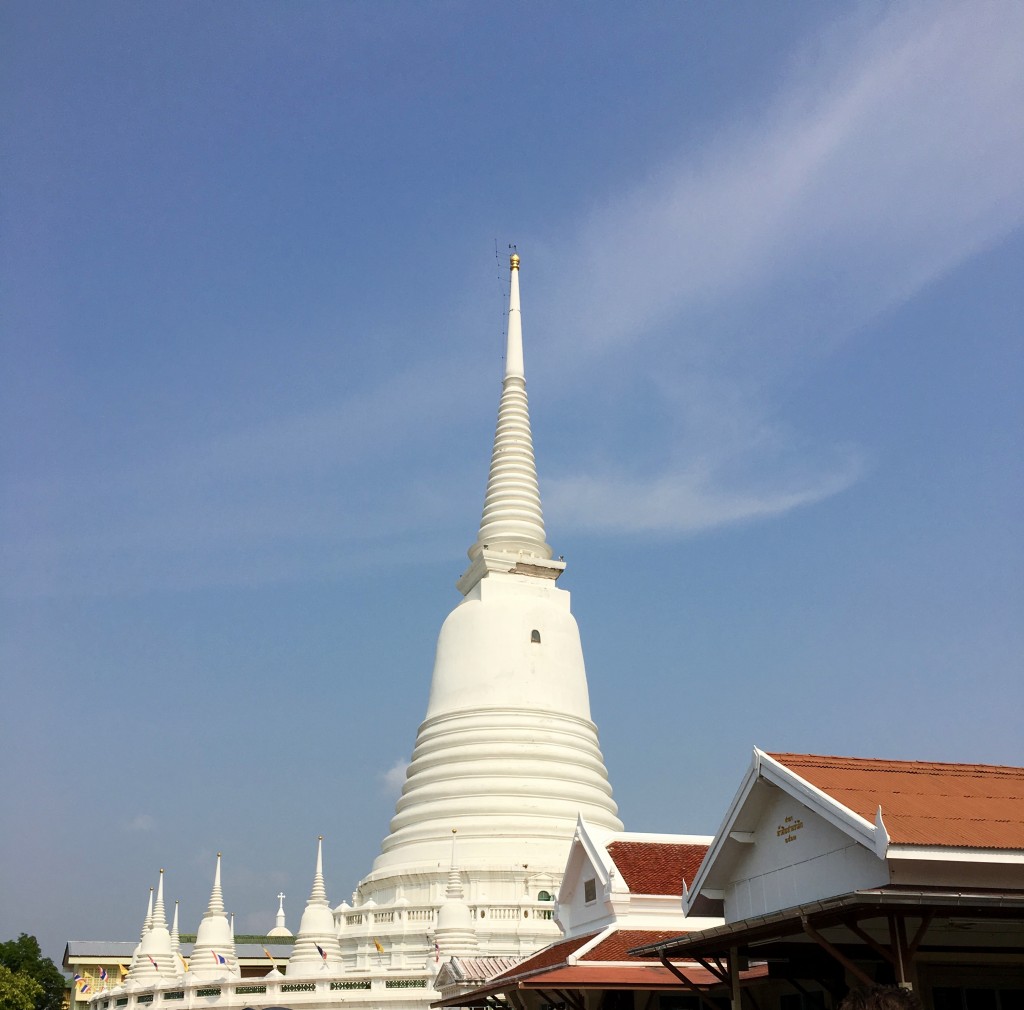 There were about 15 of us in the group, and we were the only Americans.  The rest were from the Netherlands.  During the entire two weeks we were away, I saw less than five Americans.  We pedaled through the narrow streets of Chinatown and in some busy areas stopping at temples. 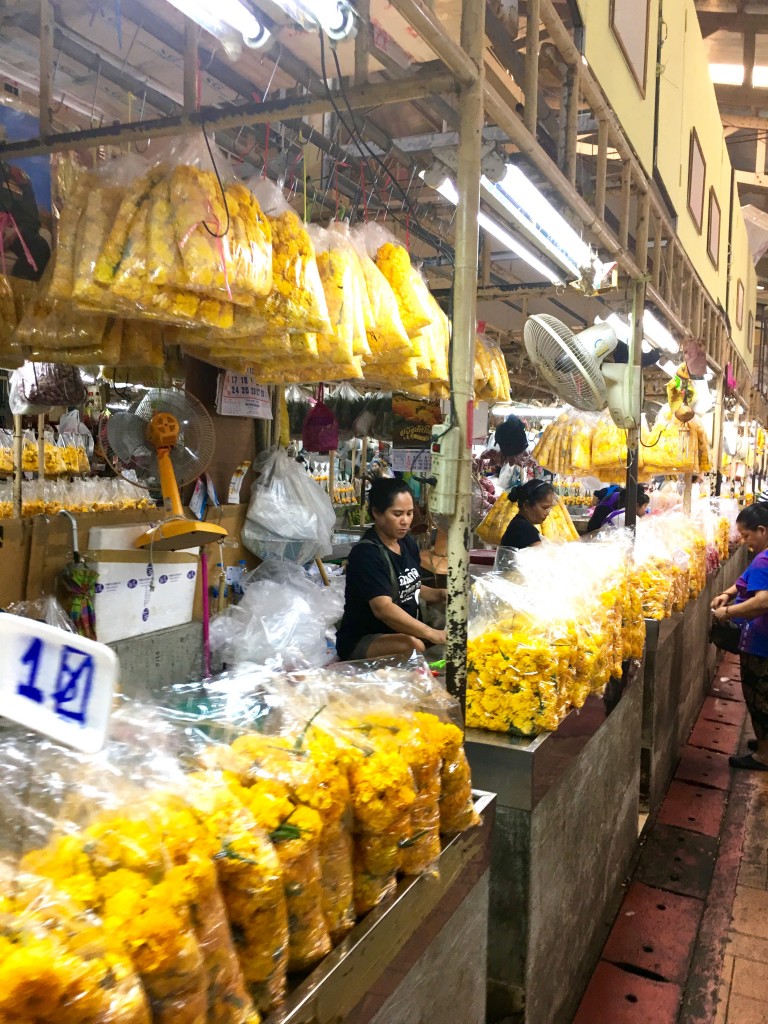 We even rode through the flower market, which was huge.  There was a lane between tables, and we rode right through it.  There were flowers forever, and they were mostly yellow.  Now keep in mind that I was on a bike riding through narrow spots, so getting photos was a challenge. 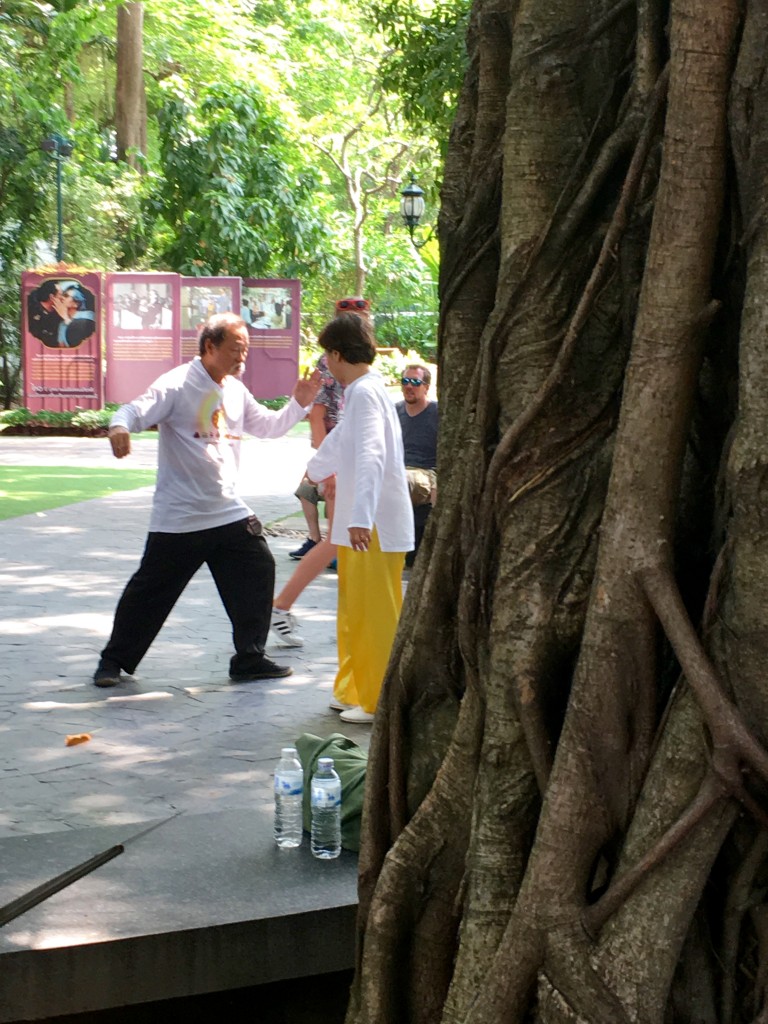 We stopped at a shady park for a nice welcome break and interrupted this man who was doing his morning exercise with his trainer.  This was such a calm area.  It was a quiet respite during the hectic ride. 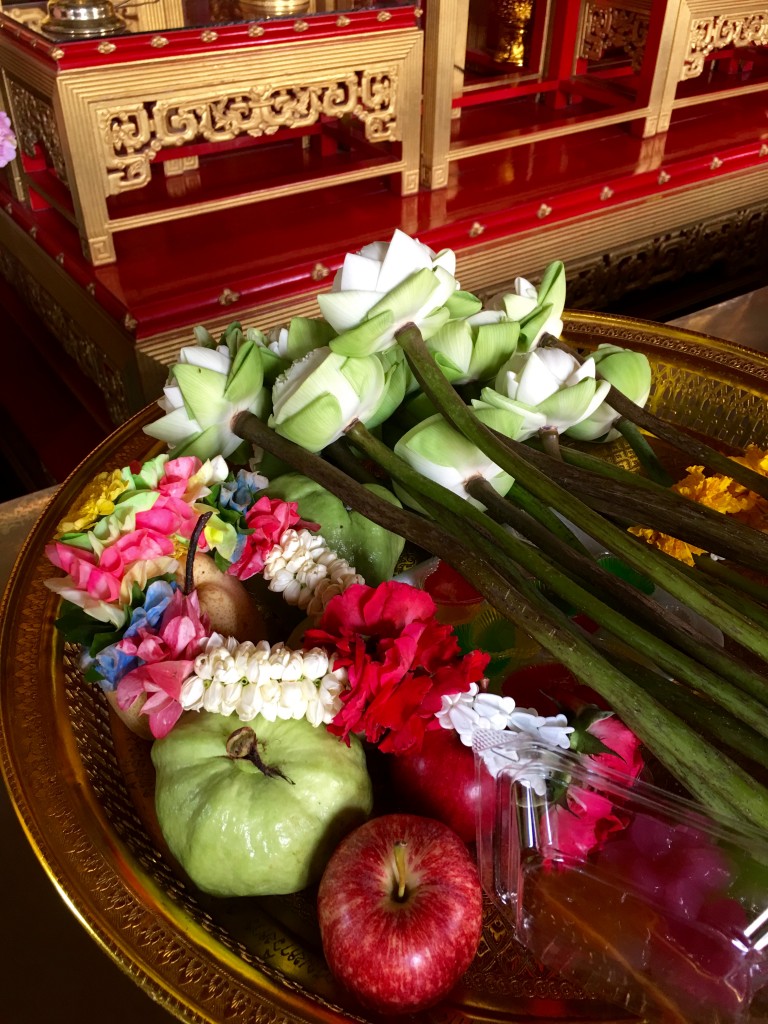 We also stopped and paid our respects to Buddha in another temple.  Shoes are not allowed in temples, and ladies must have thier shoulders, arms, and upper legs covered.  (I am often shocked by how some people are dressed when they travel.  What is proper for a beach or park is not proper for city travel.  Cover up, people.) 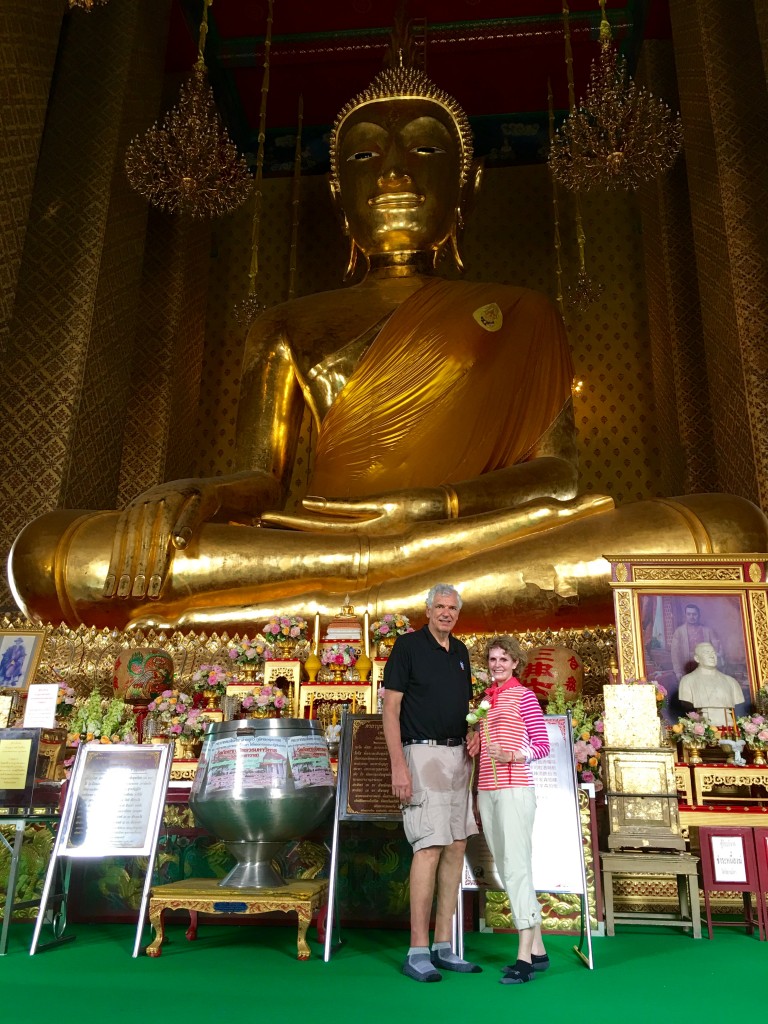 You can tell how hot we were in this shot.  I was soaked, literally soaked as if I had just been sprayed with a water hose.  You can see how Mr. Right is sweating. 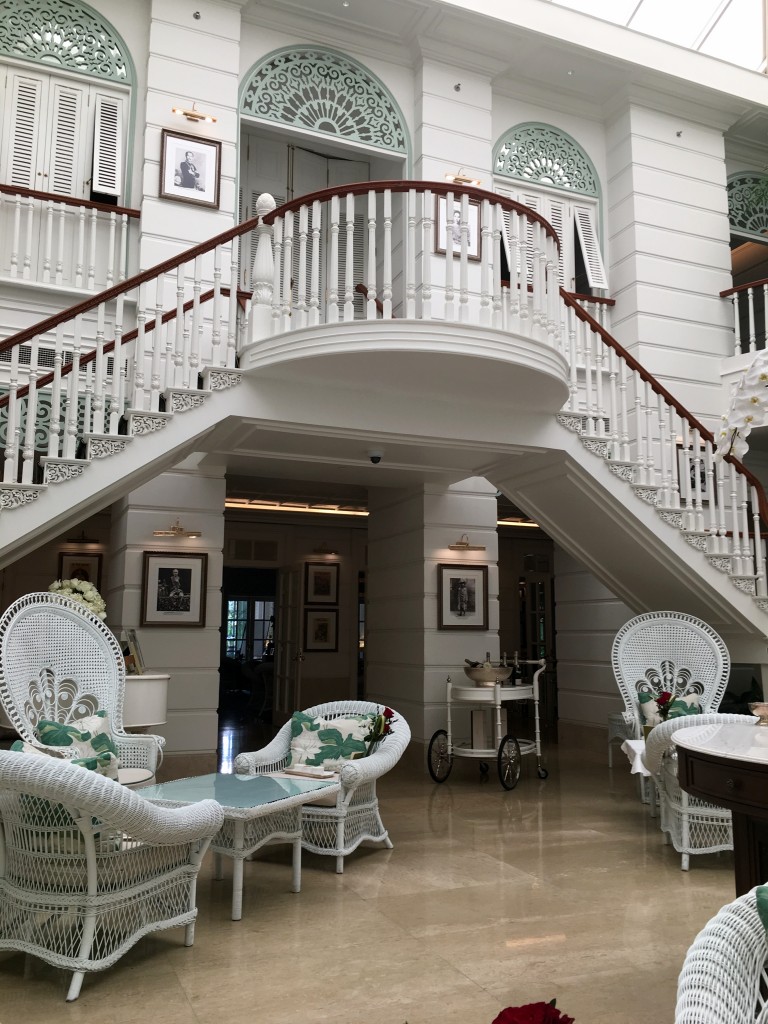 Since it was Mr. Right’s idea to do the bike tour, I came up with an activity for the two of us to do, also.  My suggestion was to have afternoon tea at the Mandarin Oriental Hotel.  I had afternoon tea there once before, and it was just lovely. 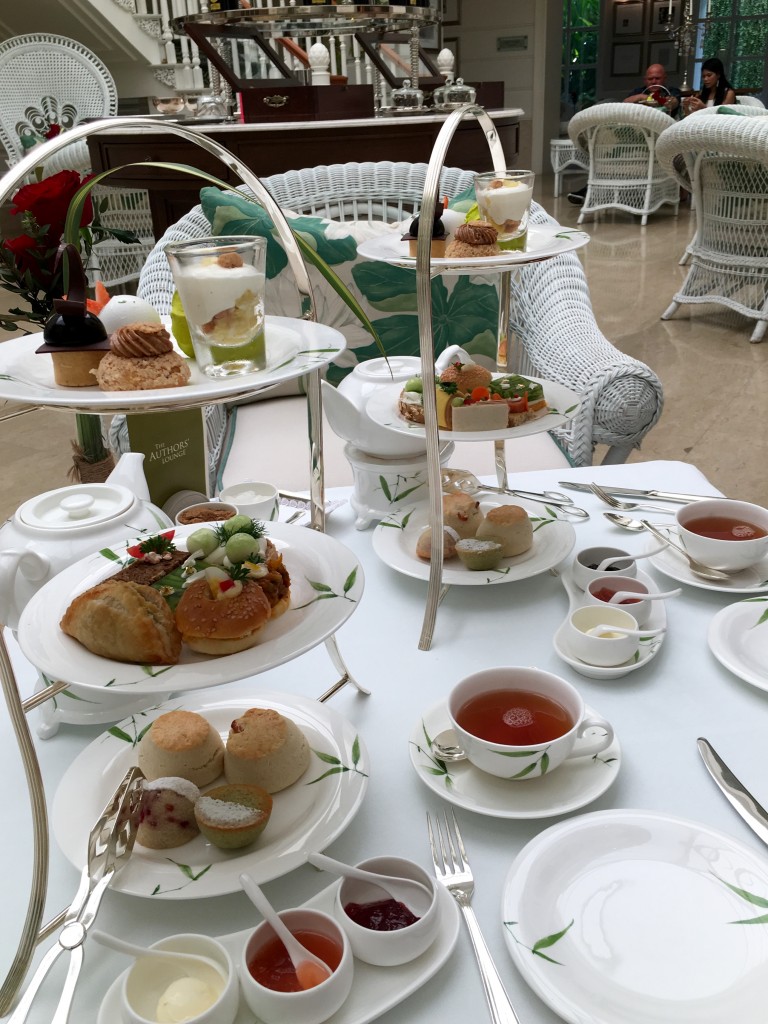 You might recall that I have been on my no sugar, no gluten, no milk kick for a few months now.  Well, I put that aside so I could enjoy every morsel offered up at the tea.  It was in their atrium which is used for afternoon teas and weddings.  There were only a few people there that afternoon, and it was sooooo relaxing and delicious. 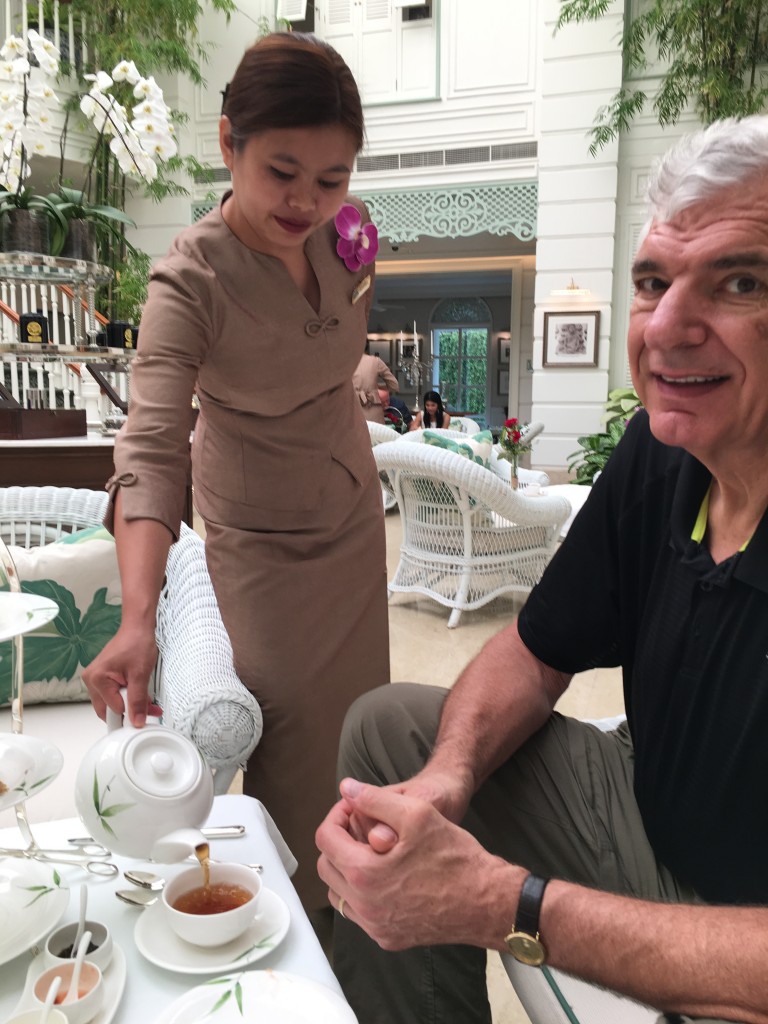 We were served in high fashion by the beautiful ladies, and we enjoyed just in a foreign land together.  Mr. Right pretends he doesn’t like going to high tea, but I think he does.  Don’t you? 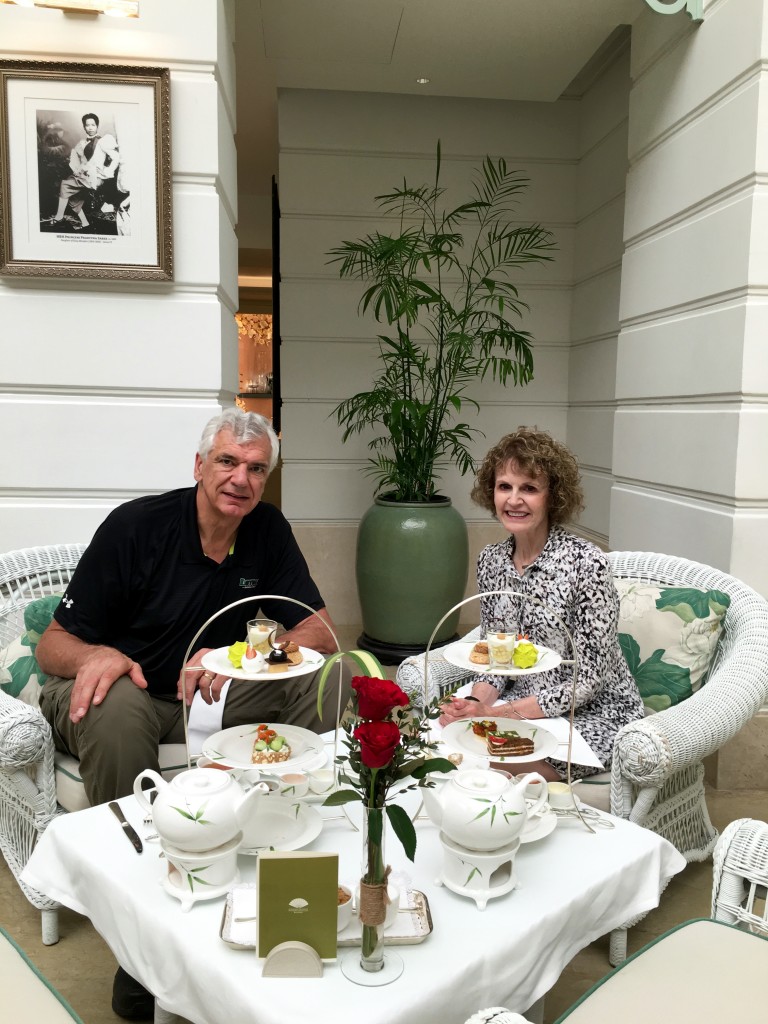 Now, if you go to Thailand, there are plenty of activities to do that can keep you busy from sun-up to sun-down.  (Jordan and Yankee spent a week on vacation a few years ago and then went there last year to meet Little Miss.)  If you aren’t an accomplished cyclist, you might want to skip that activity, but do take time to sit down to a delightful afternoon tea.

Next up I will share about our eleven days in Laos.

Our Favorite Travel Posts from 2017