When we remodeled our townhouse before moving in almost four years ago, my intention was to make the traditional eating area of the kitchen into a sitting area for me.  I had planned to use a love seat that I love along with some side chairs and make it my own cozy space.  You probably notice that I am speaking in the past tense because what I planned to do didn’t happen, and the space became the eat-in section of our kitchen. 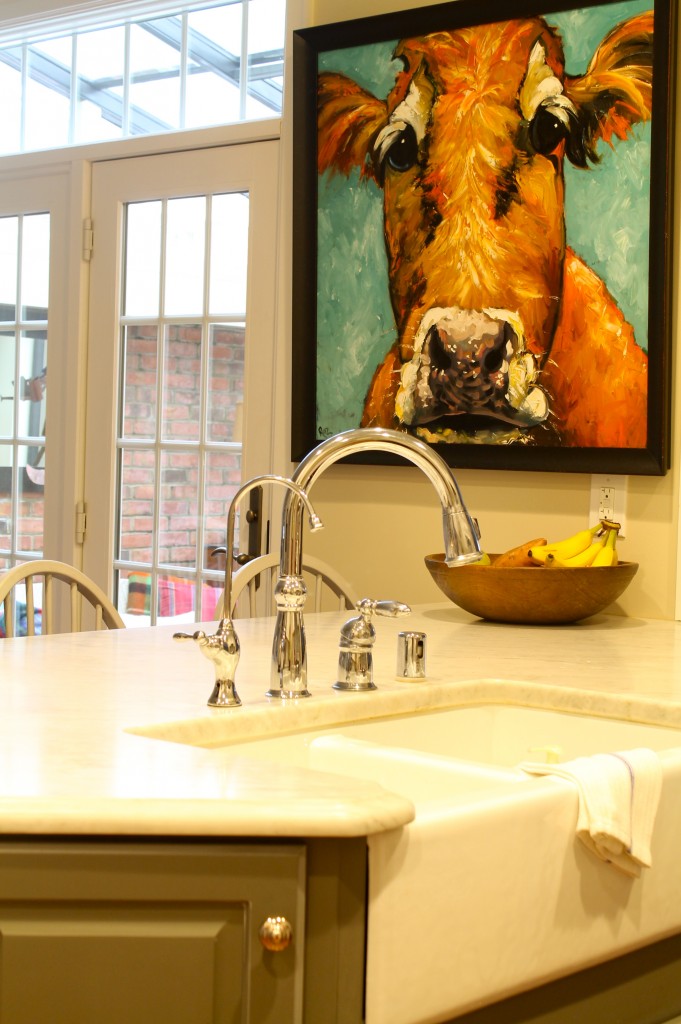 Recently, I moved my big cow painting (read about it here) from overlooking the kitchen table to overlooking the peninsula.  When I made that switch, I decided that maybe a few more tweaks were in order.  It has been sort of a domino effect and is still in the works. 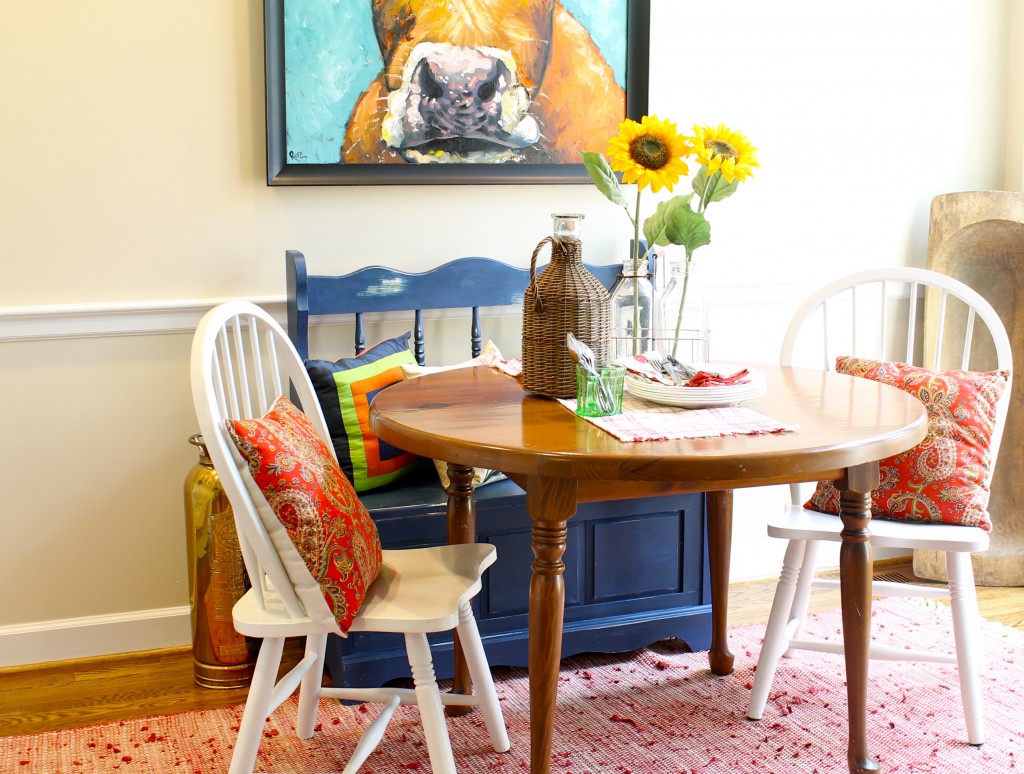 First off, I have been thinking that the area was looking a little too country.  Not that there is anything wrong with that because I am a former country girl and am all about country.  But, it was outdated country – not cool country – or farmhouse as it is known today.  So, I put my brain in action and started making some plans that didn’t seem too frivolous. 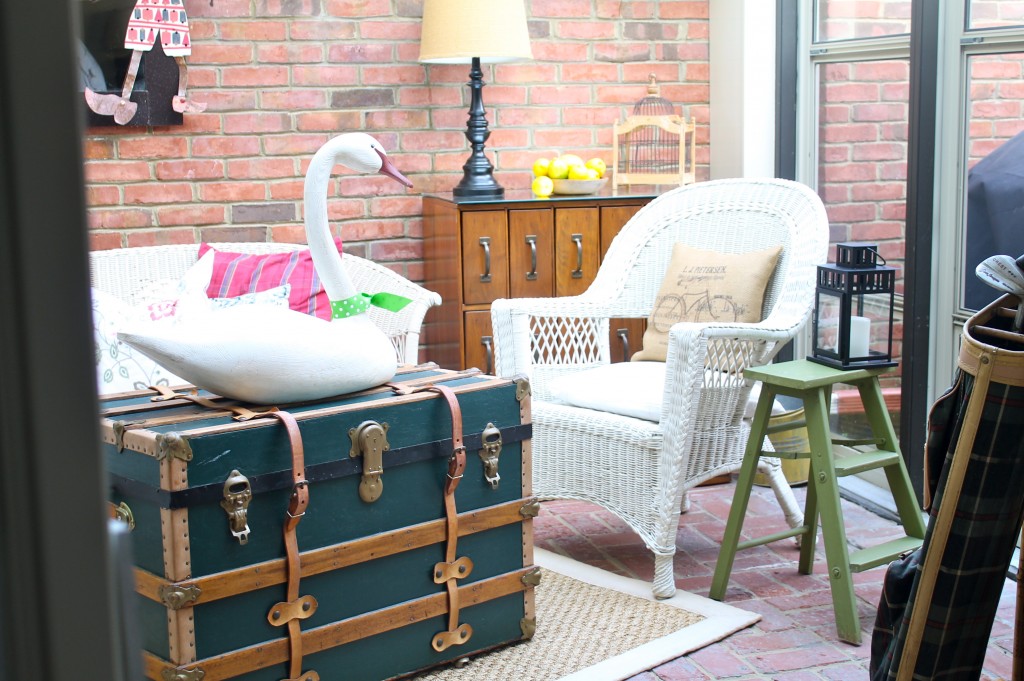 I bought a new rug, which I will show you on another day, and will be moving the red rag rug to the sun room when I prep it for spring and summer.  The red rug might fade since the sun room lives up to its name, but the old rug that was in there died after too much water got on it after a big rain storm or two last summer. 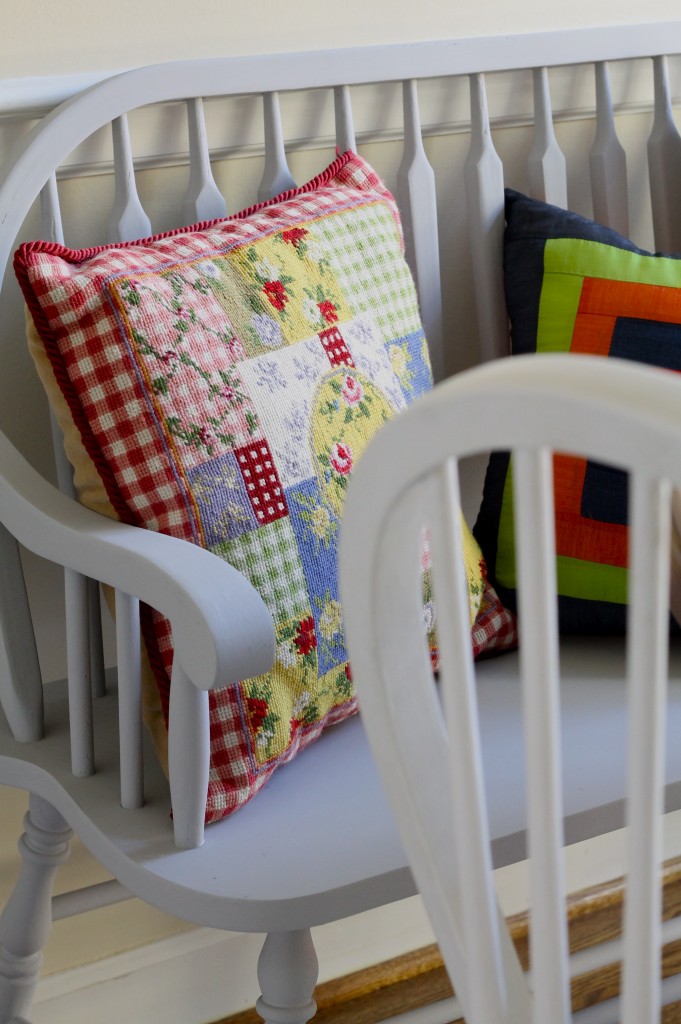 Next, I moved the navy bench from behind the table and bought a Windor style bench on Craig’s list.  I felt as if the blue bench looked too much like an overgrown toy chest.  I absolutely loved the color that I painted it last summer though.  We moved it to our basement because it will be our future grandchild’s (grandchildren???) play area when he/she visits us. 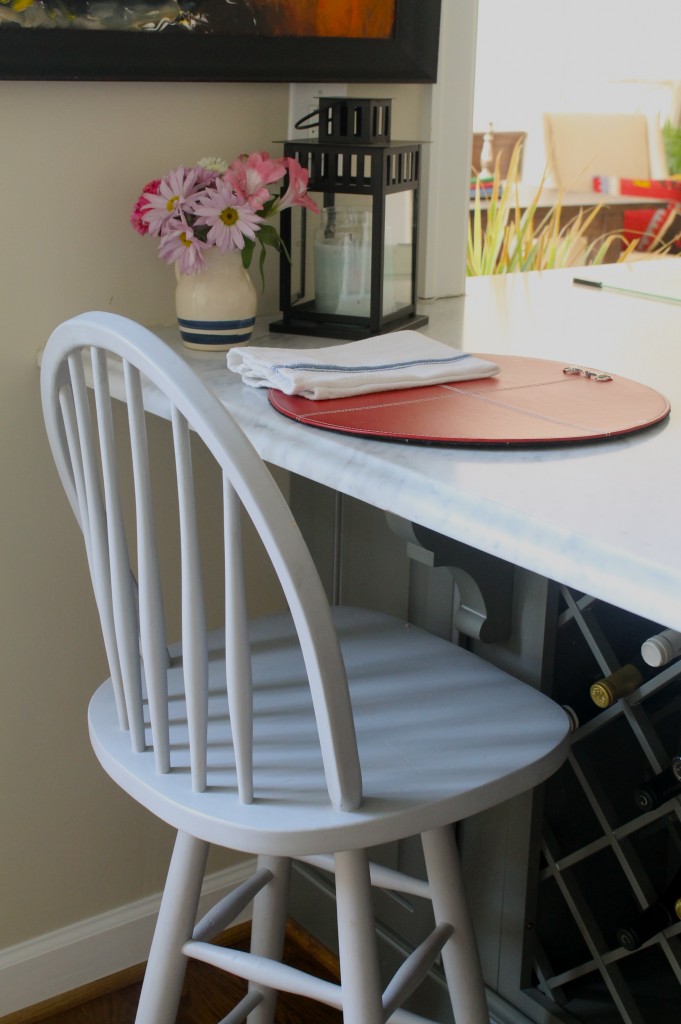 I chose Paris Grey because I wanted them to be the same color as the Windsor bar stools that I bought on Craig’s list last summer and painted. 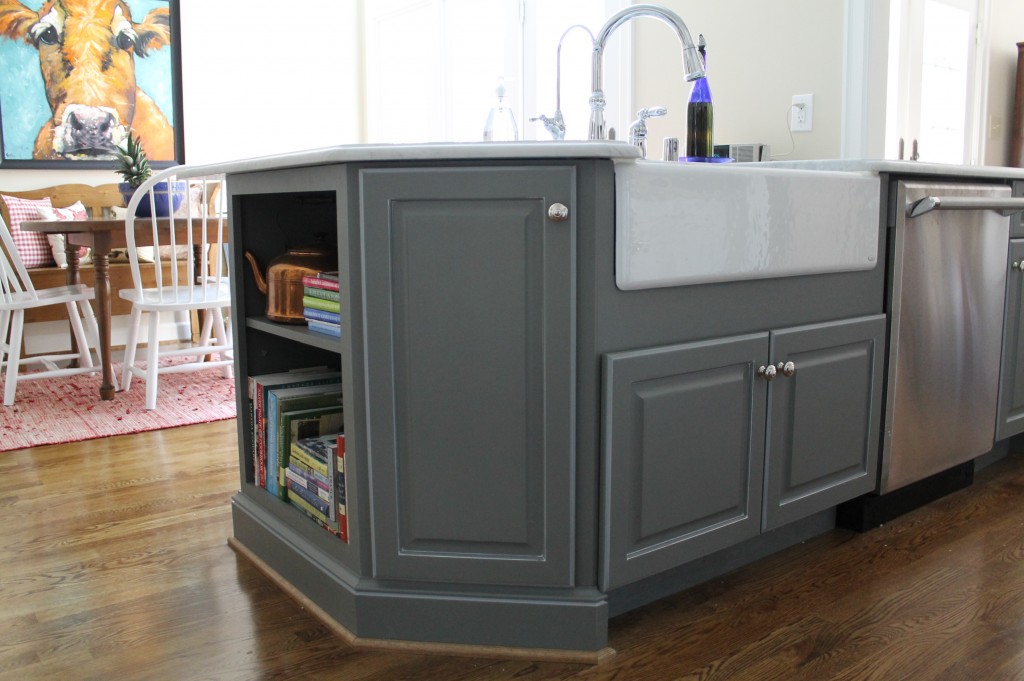 Since our peninsula is gray with a white glaze, I wanted the stools to blend with it.  I didn’t want them to be white like the chairs at the table.   Now I have started second guessing the Paris grey.  It seems to really blend in with the wall, but since I’m going for a more serene look, maybe that’s a good thing. 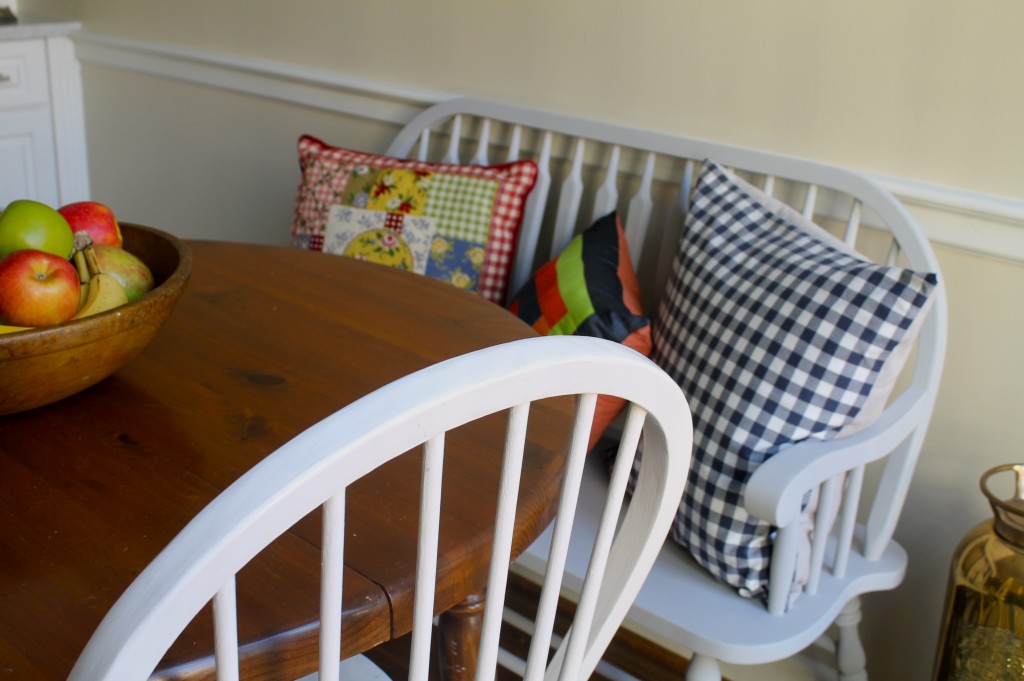 Should I leave the new to me Windsor bench painted in the Annie Sloan Paris Grey, or should I repaint it the blue that was on the previous bench?  That’s what I keep asking myself.  Maybe you can help me solve this little debate that I’m having with myself. 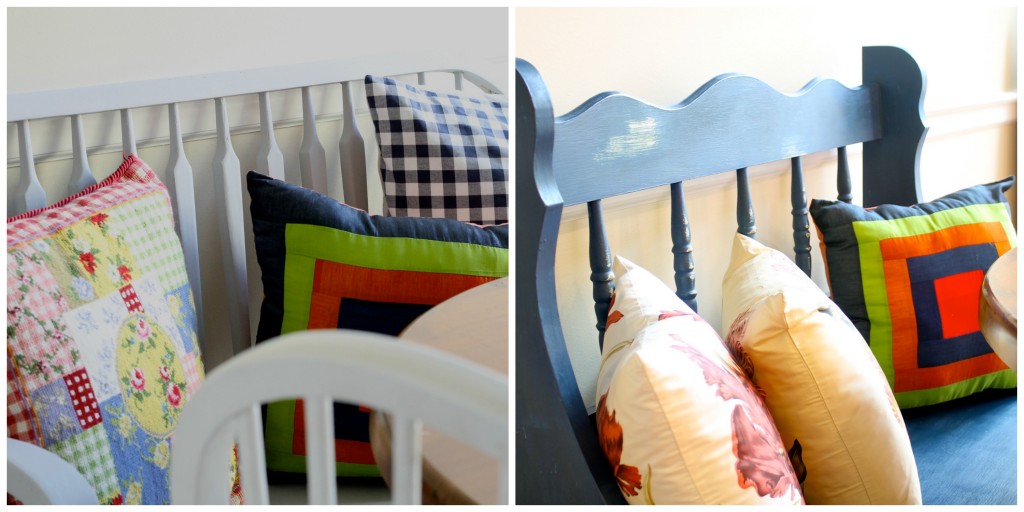 Here’s a side by side with the previous blue color.  What do you think?  Stick with the grey or repaint it so it is blue?  I guess I should tell you that the new rug is a light blue and cream stripe. 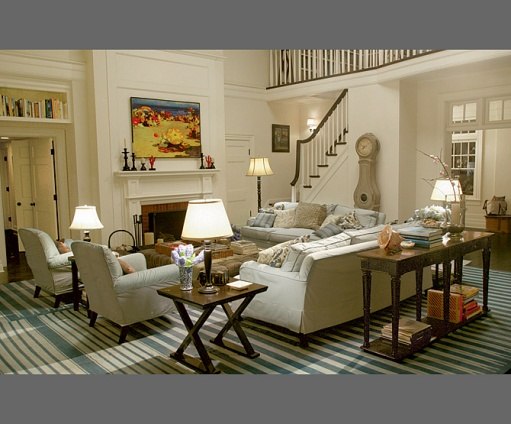 Since hearing Diane Keaton speak a few weeks ago, I have been checking out some of her movies, and this famous set is serving as my inspiration.  I love the calm neutrality of it with just the hints of  soft blue here and there along with the bold art work over the fireplace.  I need to keep the serene calmness of this room in my focus.

Any suggestions would be most appreciated.  Here’s thanking you in advance.  Thanks for stopping by.

Linking to Wow Us Wednesday at Savvy Southern Style and Miss Mustard Seed.

“Something’s Gotta Give” photo from Google.

Comfort Wins Out in the Kitchen

An Accent Table in the Kitchen