Greetings from Syracuse where Jordan and I are staying warm and cozy.  We do not have any major projects planned for this visit, although there is an area I would love to tackle.  It is their stairway area that leads to the basement.  I’m thinking we could turn it into a well-tuned organizing space for all of those things you never know what to do with.  If we get struck with a bolt of motivation, we might just take it on. 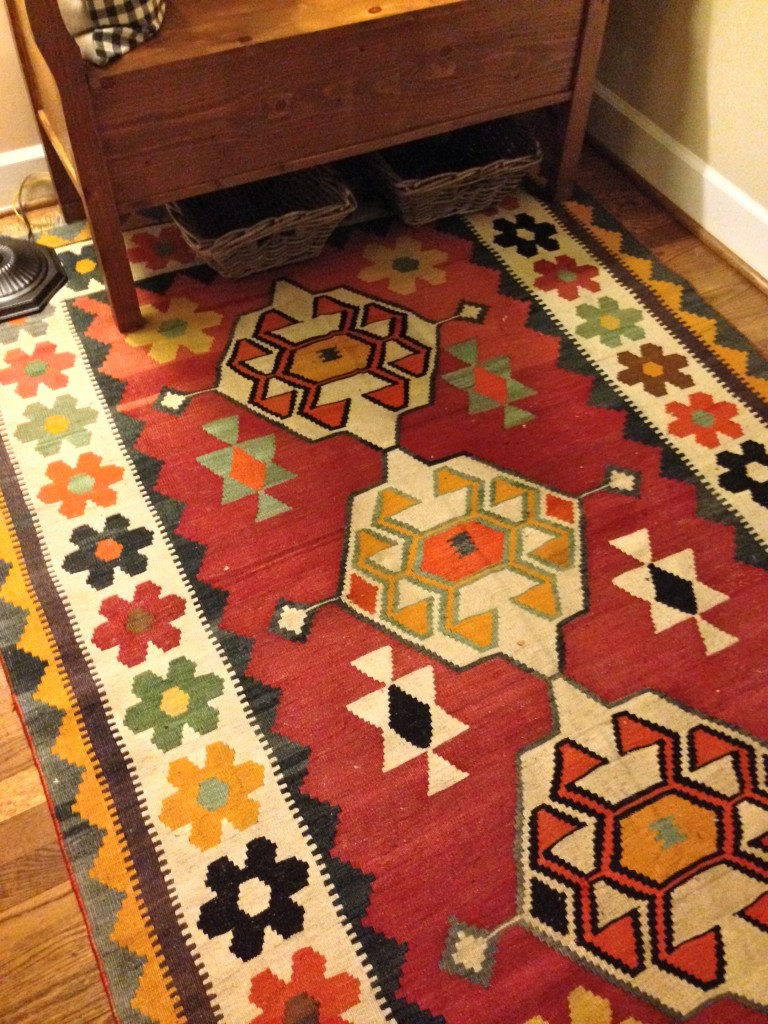 Meanwhile, I haven’t shared the changes I made to our foyer with you.  This all went down in November after our long week-end trip to Istanbul.  While there I purchased an antique Turkish kilim rug specifically for our foyer.  I am crazy about this rug.  I wanted an old rug because it has so much personality with a worn spot here and there.  Plus, it is in a high-traffic area, and I don’t have to worry about wear and tear.  It ups the look in that teeny-tiny space big time. 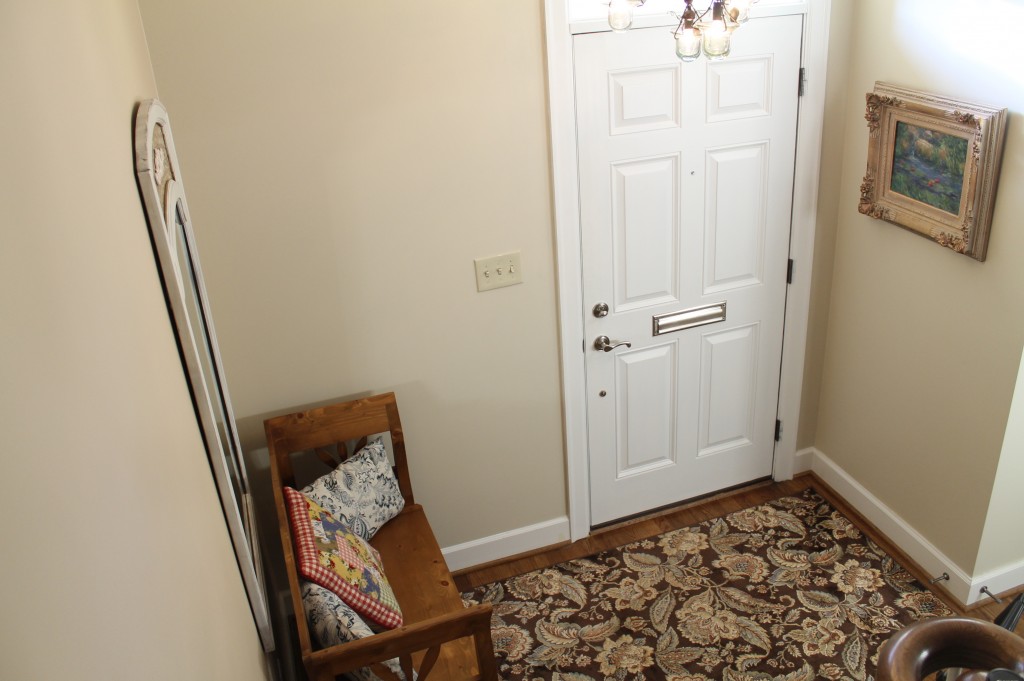 Before, it was just dull, dull, dull.  I had a brown rug that was really practical because it was the color of dirt, but it did nothing for the space.  There also used to be a drop leaf table with a lamp on it sitting in there.  However, when we walk to anything (and that’s just about everything), we exit from this door.  There was no place to sit when we put on our outdoor shoes.  So, I moved a pine bench with storage from the kitchen table to this spot to solve that issue. 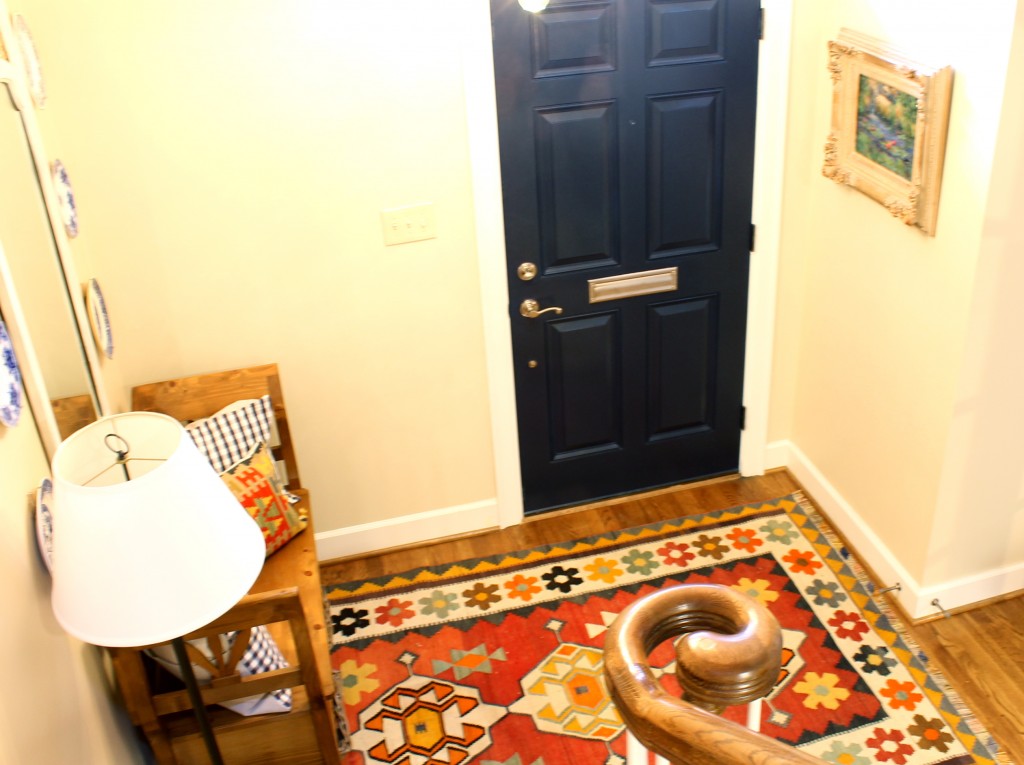 Now, here is the same space after.  In addition to adding the rug, I painted the door Naval by Sherwin Williams.  I love this color.  I think it’s the best navy on the market. 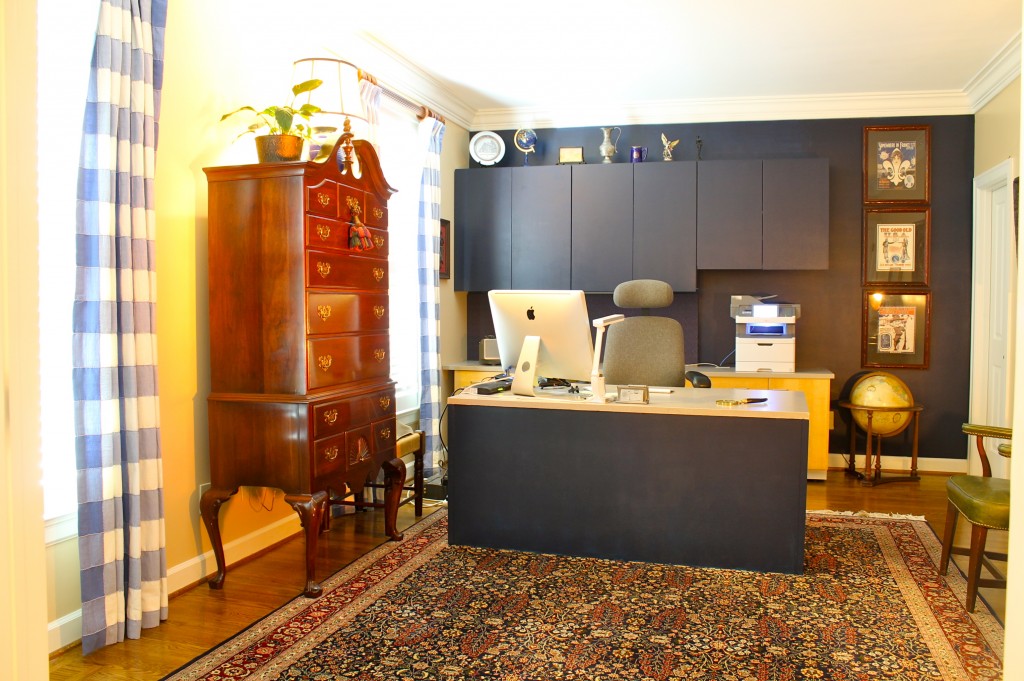 It is the same navy blue that I painted on the back wall in Mr. Right’s office last summer.  This room is the first room you see from the foyer, and so, it’s nice that the eye goes from the navy door to the navy office and then picks up touches of navy throughout the first floor. 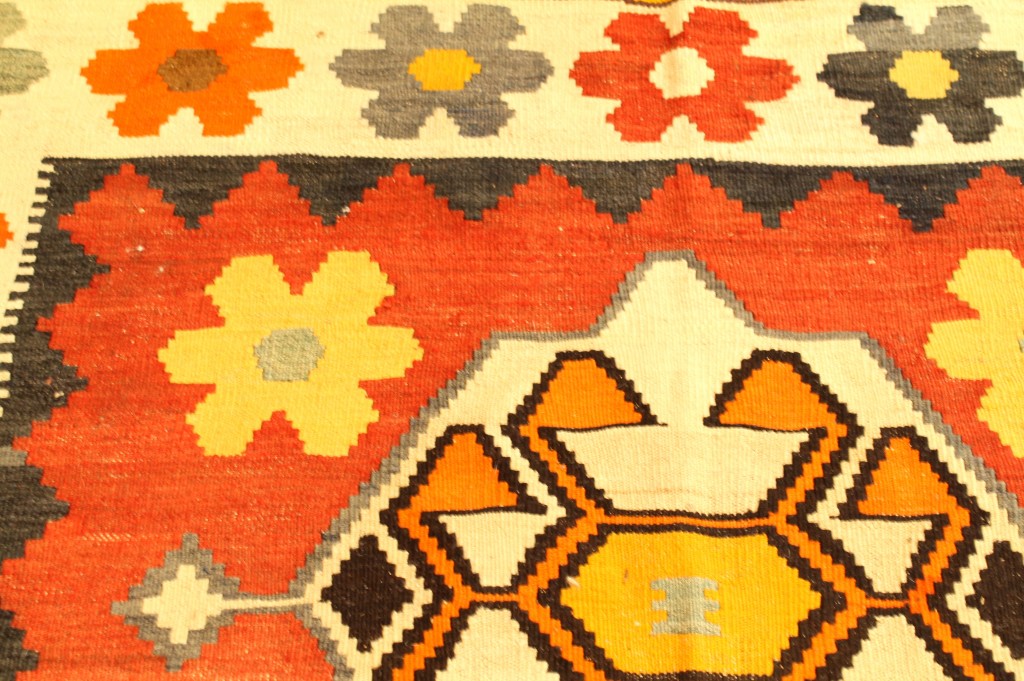 Now, let’s get back to the rug.  I knew exactly what I wanted when I went to the rug shop in Istanbul.  They had a ton of rugs, and I mean a ton stacked to the ceiling.  If they didn’t have the right one, they would have had friends who also were selling tons of rugs.  The selection is endless.  I told them I was looking for an old rug with navy along with some green, red, gold, and any other color that happened to be in it., and they had it.  These guys weren’t typical rug salesman that we have encountered on our travels.  They weren’t pushy and recognized and respected that I knew what I wanted, and they weren’t gonna change my mind. 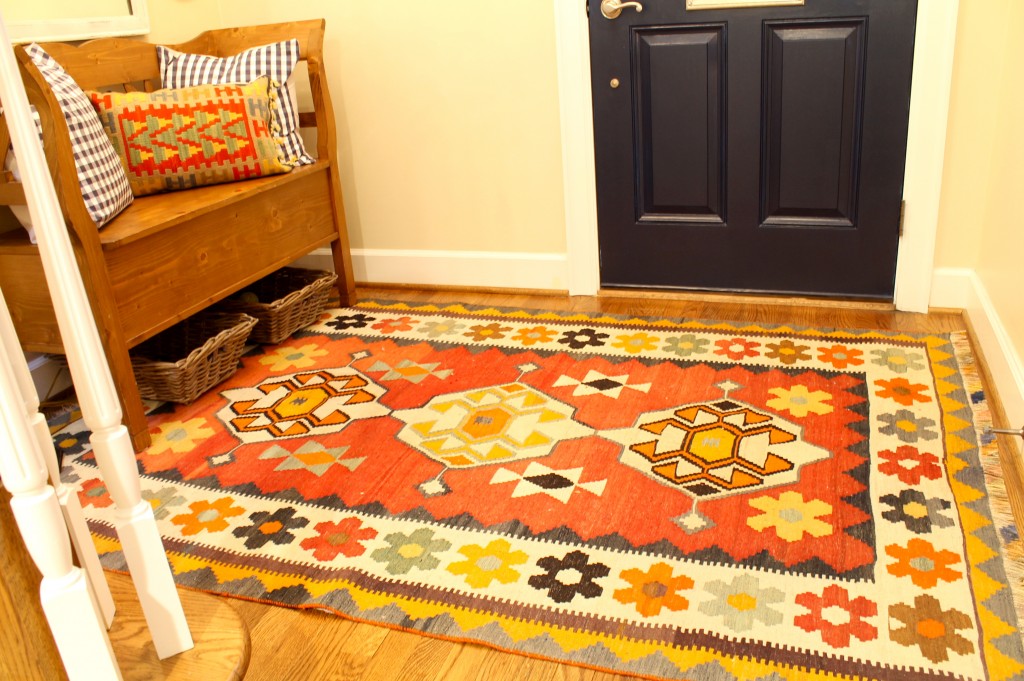 I knew I wanted the rug to fill up as much of the foyer floor space as possible, and I took the measurements with me.  That worked out great, because this rug was a tad too long, but they were able to have it shortened in about 20 minutes.  The local rug repairman just happened to be a partner of theirs, and his shop just happened to be next door. 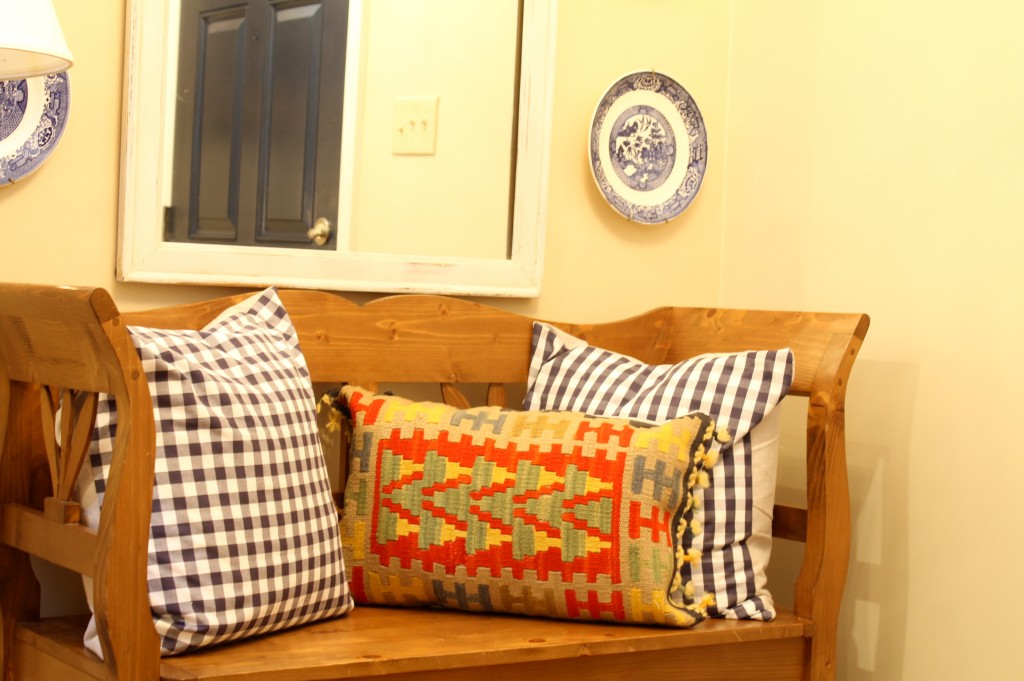 Another change I made in the foyer involved pillows.  Thank goodness for pillows, right???  I bought some kilim pillow tops when I was in Paris in October.  These pillow tops came about because rug dealers will take the good parts from an old and worn out rug, and have them made into pillows.  That’s so clever.  Anyway, this rectangular number is one that I bought.  The others are in the great room.  I liked it because some of the design looks like the letter “H” which is the initial for our last name.  I also added some navy and cream pillows that I made from fabric purchased at Ikea.  This all ties in to the door.  And by the way, these rug dealers gave me two kilim pillow tops of my choice when I bought this foyer rug.  Sweet!!! 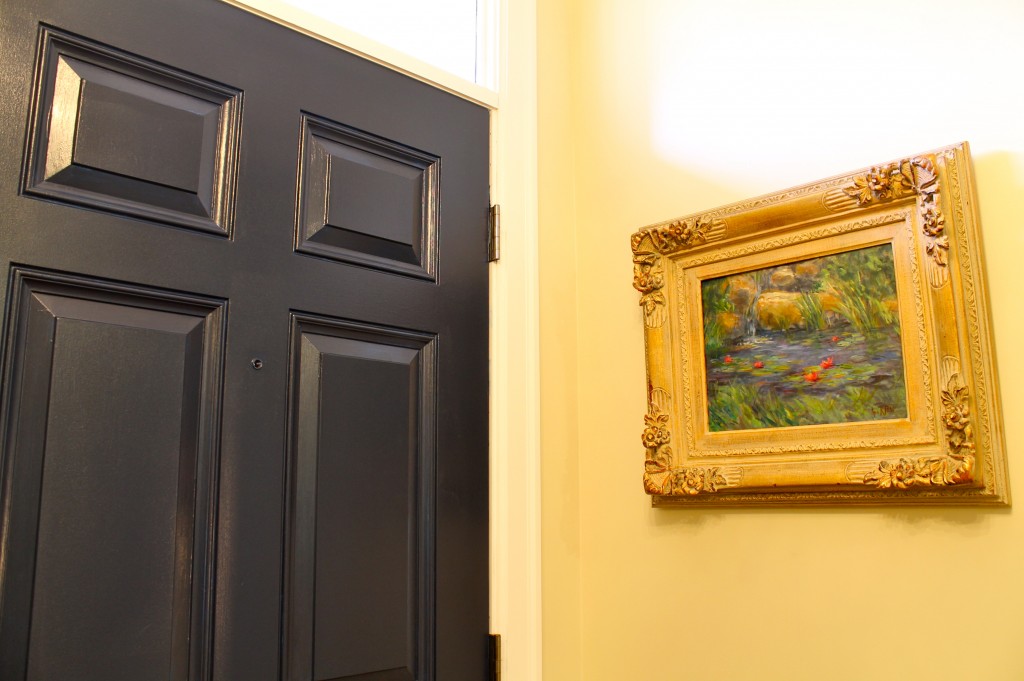 A fringe benefit of painting the door is that the dark blues in one of my favorite oil paintings now really pop.  Two more things that I did in the room were to raise the height of the mirror that hangs behind the bench, and I also added blue and white plates on both sides of it.  This area is a real photography challenge (at least for me), and while writing this, I decided the photos of those tweaks just aren’t blog worthy.  And since I’m at Jordan’s and not chez moi, there’s no way to quickly set up my tripod and take a few new photos.  I’ll share them with ya’ll soon.  Okay? 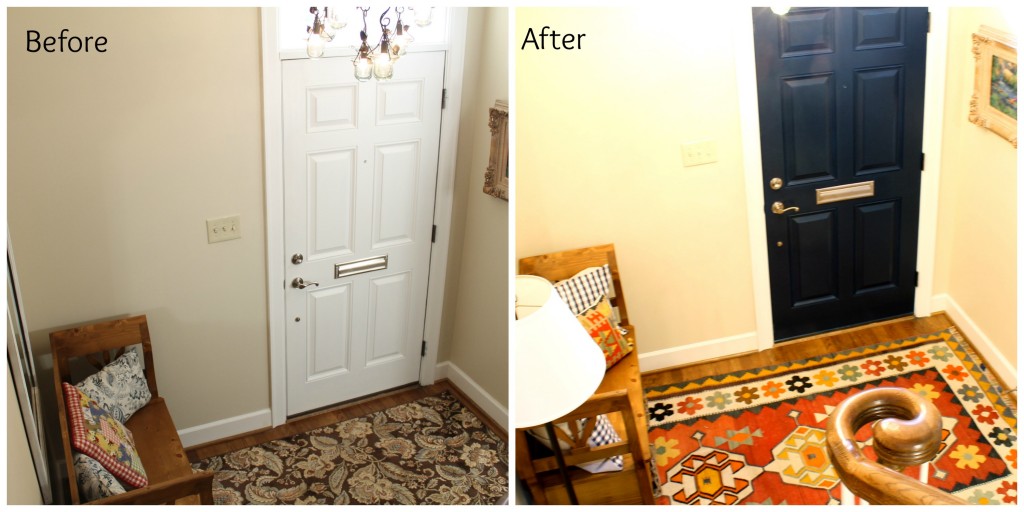 Now, here’s a side by side.  I think it is so improved.

March in the Foyer

New Paint Color in the Foyer