Greetings, all!!!  Jordan and I are on day two of her two-day visit, and just finished hosting her second (this was out of town) Stella and Dot party in two days.  Whew!!!  It’s a whirlwind, but fab. 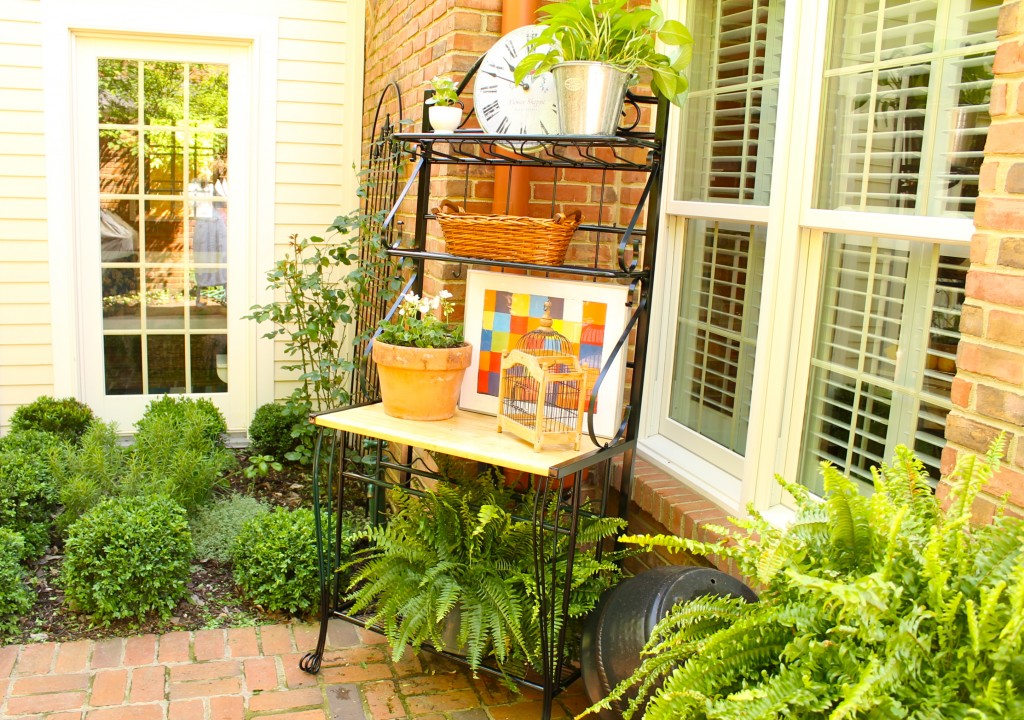 Monday I showed you the baker’s rack that I bought, painted, and placed in our courtyard to hide an eyesore.  It will serve as a potting bench, bar, and server.   However, the courtyard rearranging didn’t stop there. 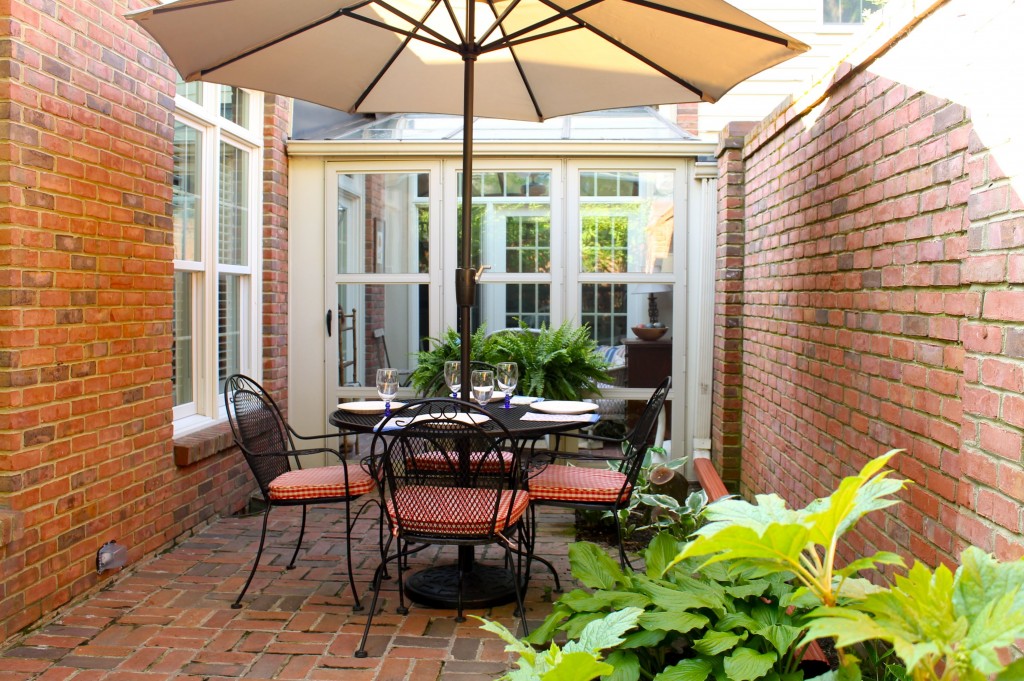 This is what it looks like now.  Not only did we move the table from another area of the space, but…… 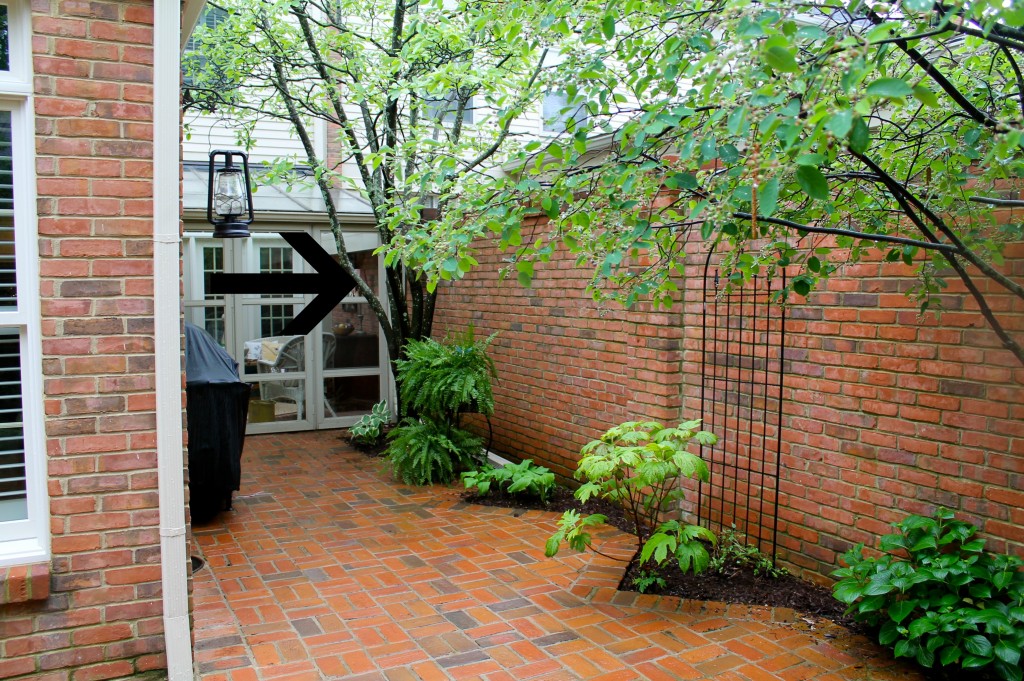 …..we had the sweet bay magnolia tree chopped down (See the arrow above).  Although it provided a little shade for the sunroom, it was so very, very dirty.  It was shedding some form of flora 10 months of the year.  Sometimes it would drop so much of its stuff, that I couldn’t even get the door open.  Ugh!!!  It had to go. 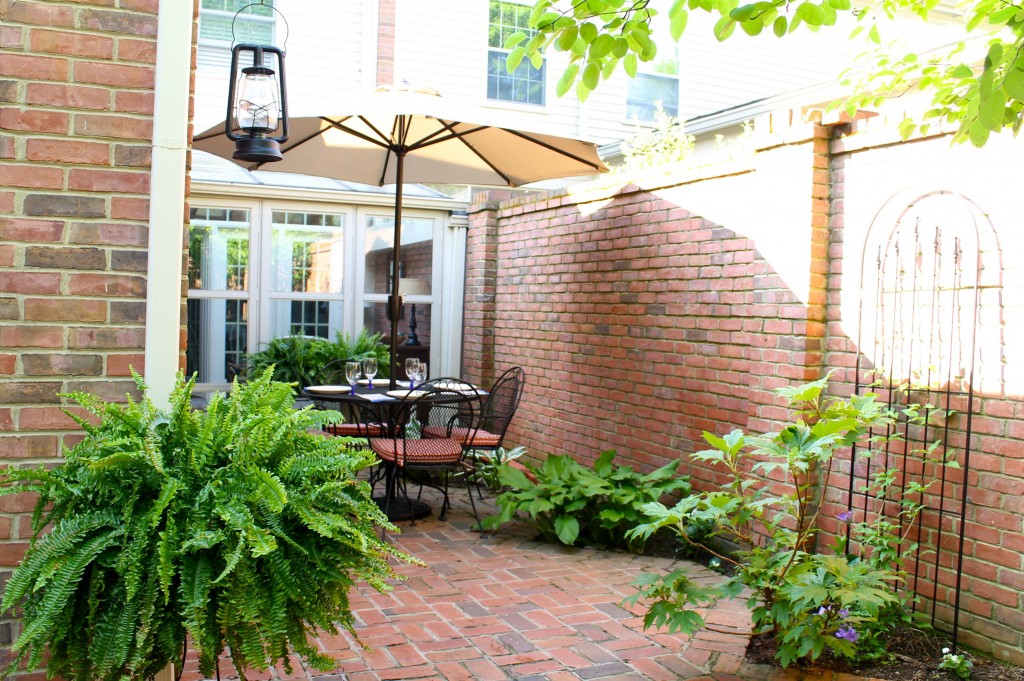 Last fall when I spent a week alone in Paris, I had lunch (here) at Ralph’s one day.  It is the restaurant attached to the Ralph Lauren store, and I ate in the courtyard.  The space wasn’t much bigger than ours, but oh, what charm and personality it had! 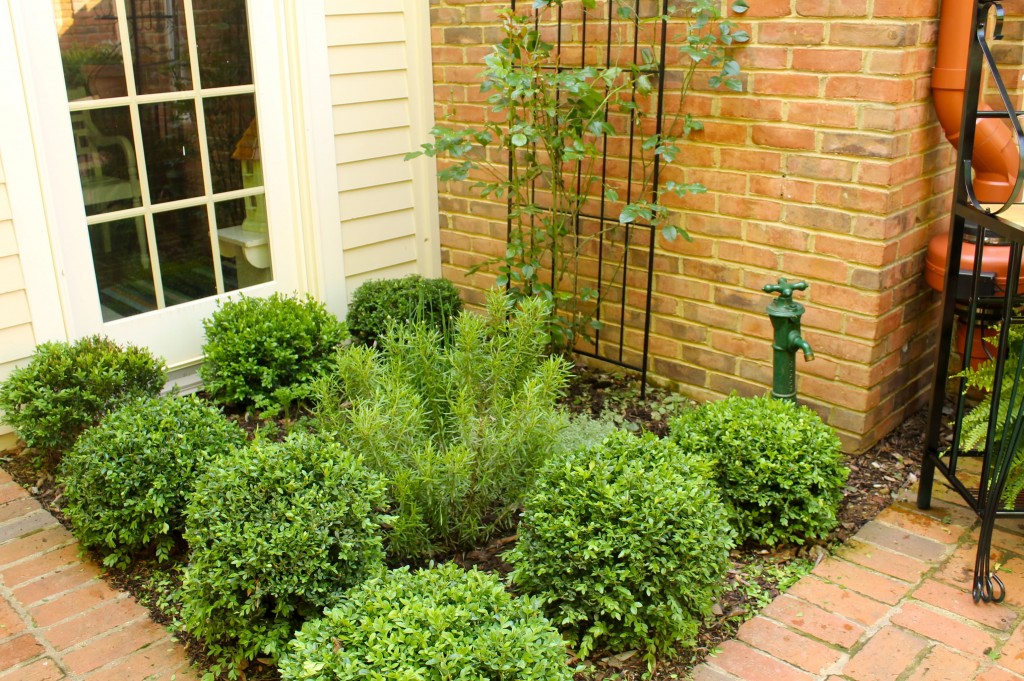 It was lush with foliage and huge potted trees, wrought iron tables, benches, and chairs.  I wanted it and knew that I could work on recreating it here on a much smaller scale.  For instance, my little herb garden adds some nice greenery while being serviceable at the same time. 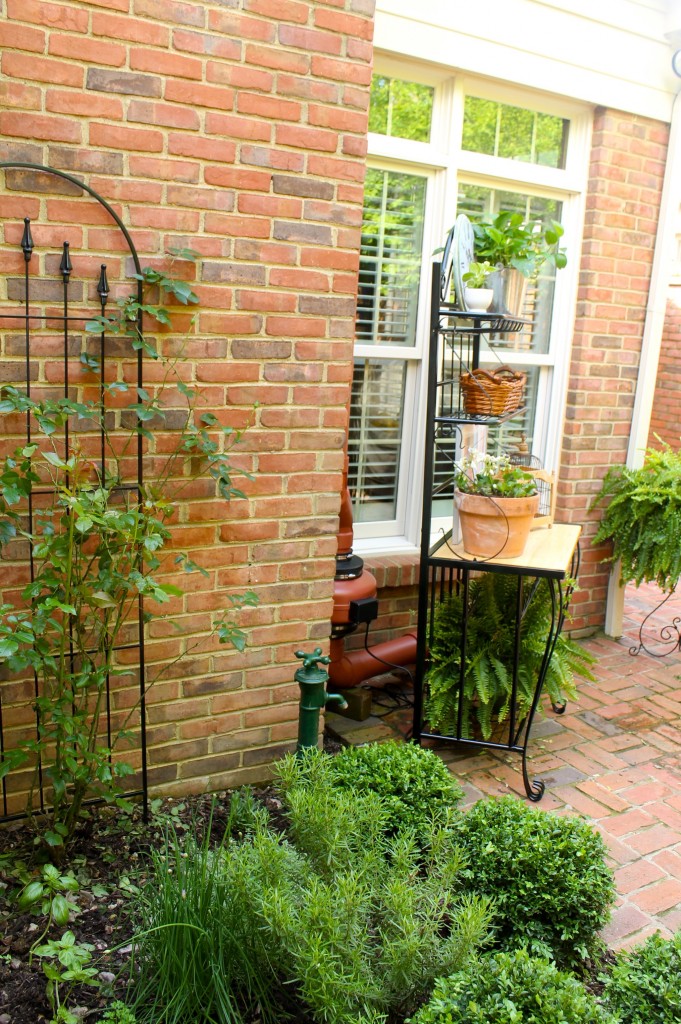 I’ll never have the pots of trees like Ralph’s (I’m talking HUGE pots) because there is no room here for storing them in the winter. 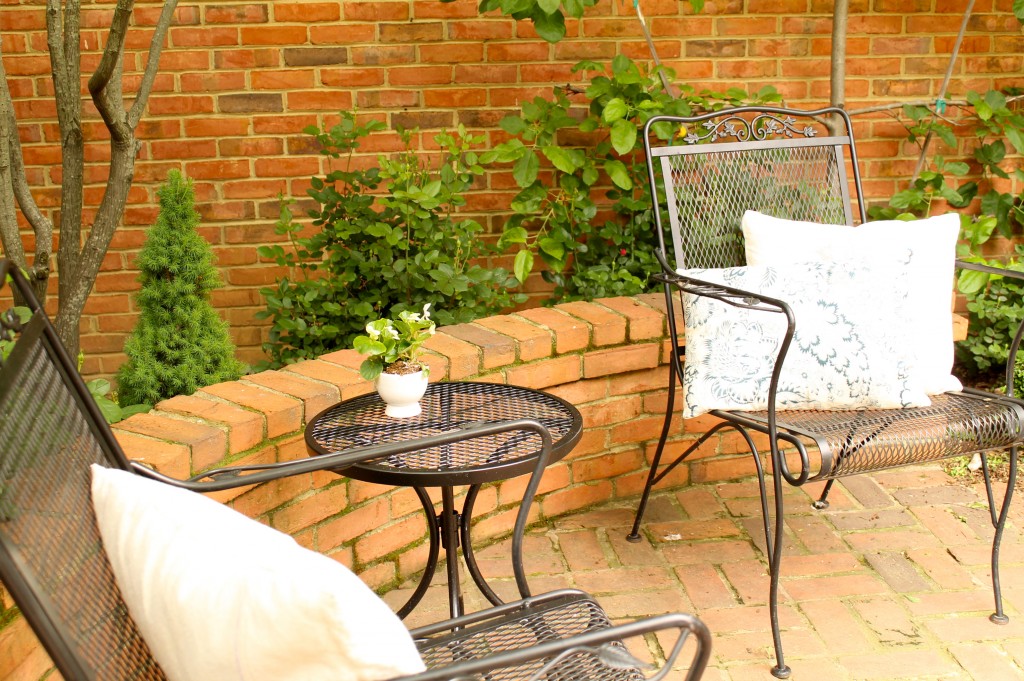 I can have little seating areas like Ralph’s, though.  This is the space where the table used to be.  It is farther from the house, and having dinner there involved a lot of walking to get everything from the kitchen to the table.  Since the table is now nearer to the kitchen, this little shaded space under the trees and in front of the roses is perfect for reading or sipping a cup of tea. 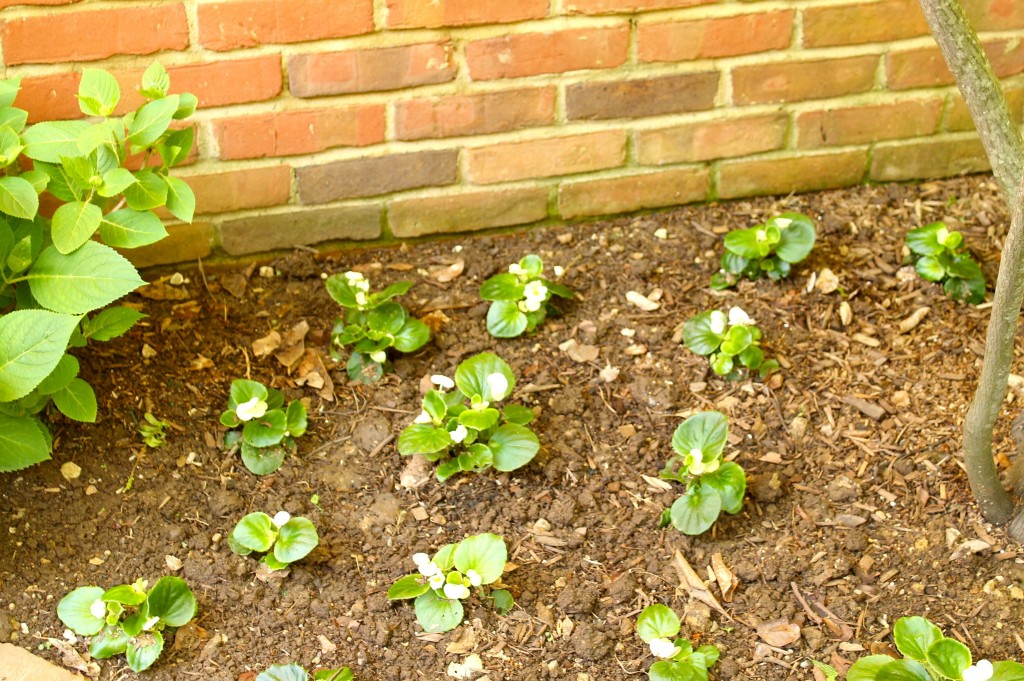 I planted annuals (begonias) in all of the empty spaces and decided to stick with white this year.  When they grow, the entire area will be covered.  There are also trailing plants with white blossoms that will be climbing the brick walls. 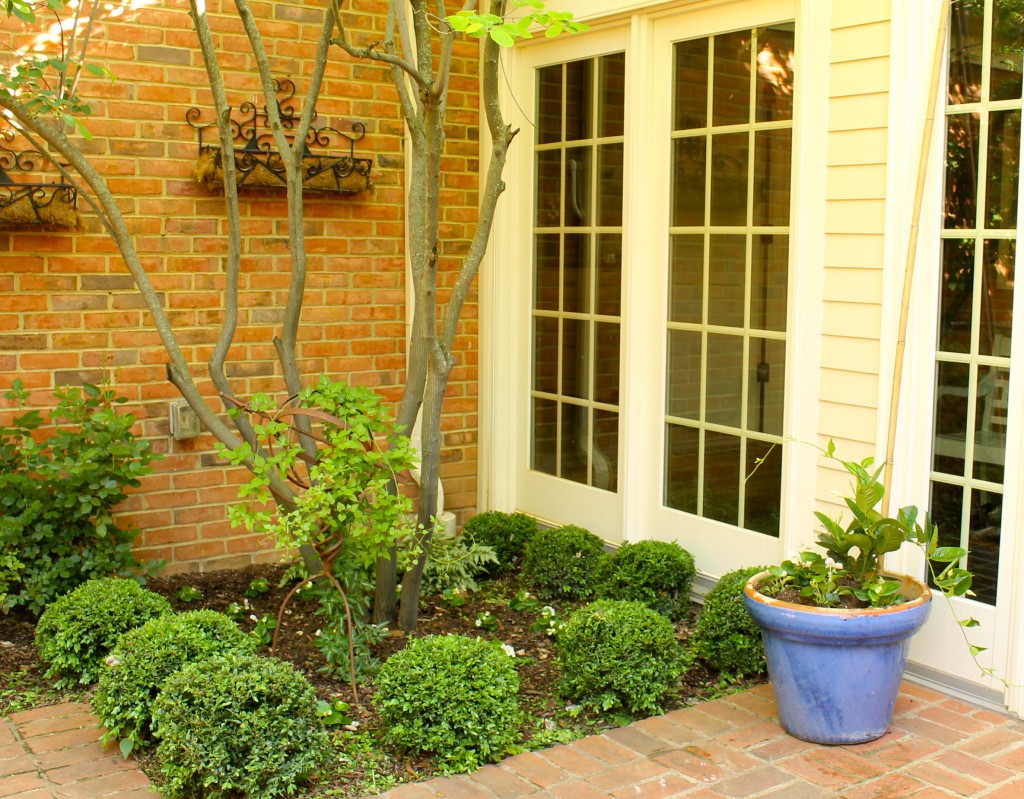 Those two wrought iron planters hanging against the brick are on temporary hold.  Right now, a dove family is living in one, and I can’t do a thing till they fly the coupe.  Last year, she actually raised three separate families before deciding she had enough.

Although this isn’t Paris, I have a good start on capturing the charm and feel of Ralph’s courtyard.  With a few tweaks each year, eventually it will get there.  Till then c’est la vie.

More Ralph Lauren in the Courtyard

Before Tour of the Courtyard

Paint Freshens Up the Courtyard Bench