First, we’ll start with our superlatives, and then give you some facts.

– Favorite color – Any shade of blue with yellow a close second

– Favorite movie – “The Way We Were” (I know this dates me, but I loved/love that movie.  I sobbed the ugly tears).

– Favorite book – Grapes of Wrath  (The ending blew me away.  I read it as a teenager and will never read it again.  I’m afraid I’ll see it differently  and my feelings will change).

– Favorite book – It’s always changing, however the last book I read, King Peggy American Secretary, Her Royal Destiny, and the Inspiring Story of How She Changed an African Village, was great.

Now on to five facts about each of us.  I’ll go first, and then Jordan will follow. 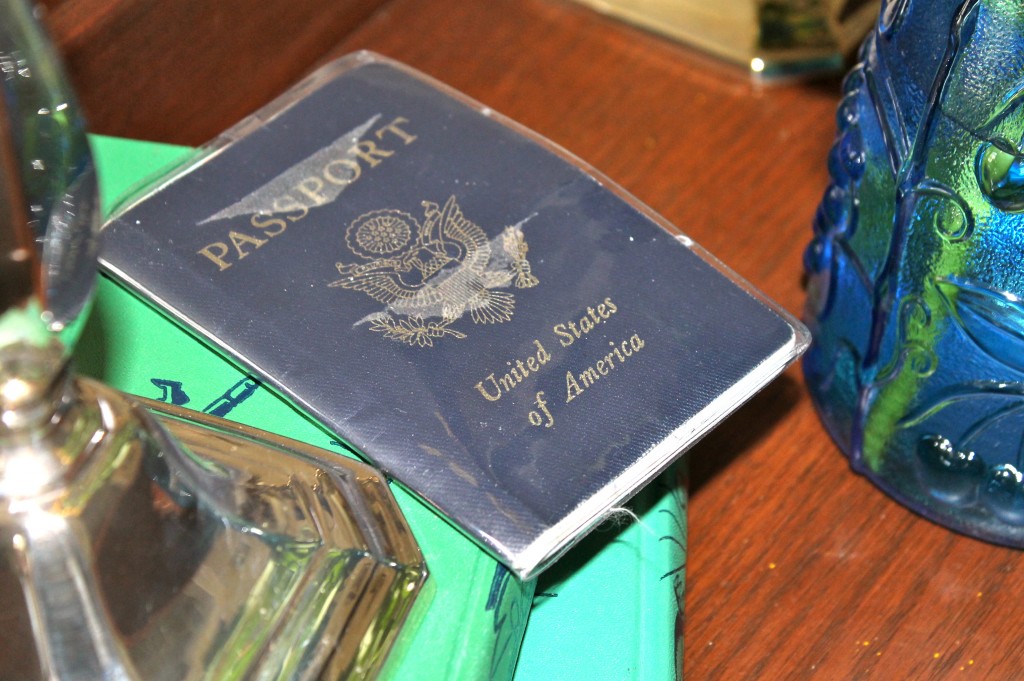 I have traveled to 70 countries.  When my husband and I met in college, he told me during our second conversation that he wanted to travel.  I guess he meant it.  Although the Netherlands is my favorite country, the more primitive, remote, and third world a country is, the happier I am.  Our children and their spouses love to travel, too. 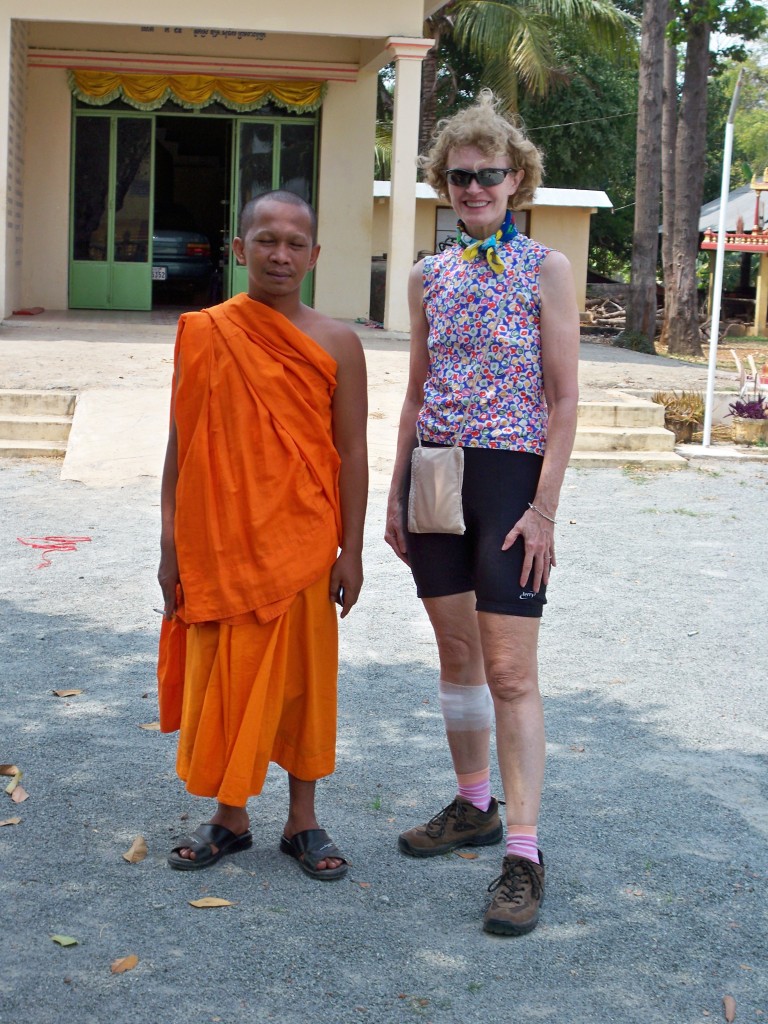 Along with traveling comes bicycling.  It is one of my favorite things to do.  I have been lucky enough to cycle across the USA, from Portland, OR to southern California, and from Minneapolis to New Orleans.  In addition, I rode from the top to the bottom of France, from the bottom of England to the top of Scotland and many other European countries.  I’ve also gotten to ride in some remote countries in Southeast Asia and in Africa.  (Jordan will share more about the African gig).  The above photo was taken when we stopped cycling to take a break at a monastery in Cambodia.  It’s safe to say that you’ll find me rolling along on a local country road on about any pretty and warm day. 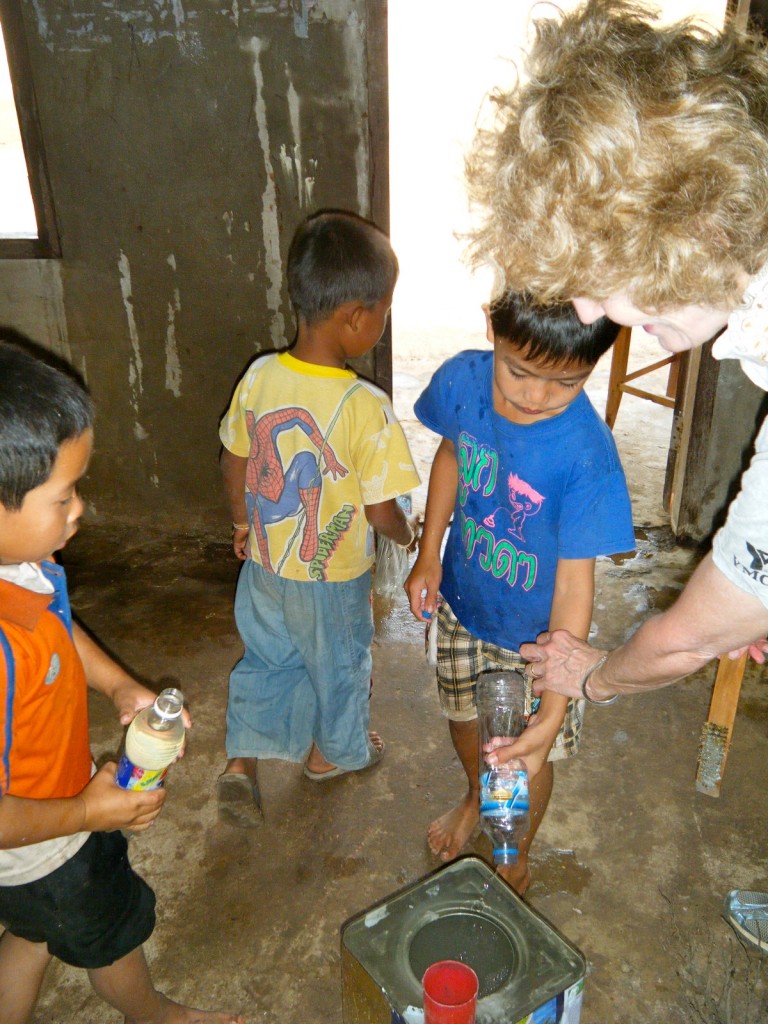 I was a school teacher for 18 years.  Eight of those years were spent teaching in an alternative school.  Working with students who had really adverse home lives is what made me become involved in Habitat for Humanity and later our own volunteer group that we formed.  Now each year we pick a country (usually third-world) that we want to help.  We then find an agency there who needs our help, and we spend two or so weeks there working to improve the lives of others.  We have built homes, improved schools, and worked in orphanages.  In this photo, I am working together with my little buddies in Laos to prep their classroom for painting.

I have a degree in journalism from West Virginia University.  I learned to love writing in high school and was devastated when I wasn’t selected as editor of the high school newspaper.   My first job out of college was as a reporter on a small daily newspaper, and it was my all-time favorite job.  I loved every single thing about it except the pay.  Having a blog gives me the excuse to stay involved with writing. 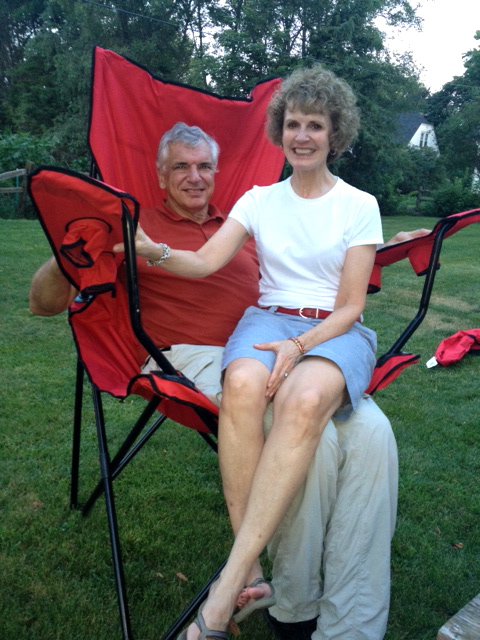 I met my husband Mike (known to you as Mr. Right) on a bus.  We were both juniors at WVU.  He was the BMOC literally because he was/is seven feet tall and was a highly-publicized basketball player.  We lived in the same dorm, yet I had never seen him.  You see, there were two campuses at WVU – the old campus and the new campus.  Students like us who lived on the new campus had to take an intra-campus bus to get to class.  So, one morning I sat down on the crowded bus beside a cute guy.  (I didn’t know he was so tall till he stood up). We struck up a conversation, and the rest is history.  After college, he played professional basketball in Europe for one season which means we moved to Geneva, Switzerland shortly after we were married.

Hi all.  Jordan here.  The first fact that I am going to share is that I have actually been on the receiving end of the words, “Come on down.”  That’s right.  I was selected to be a contestant on “The Price is Right”.  Producers actually interview each audience member as they enter the studio.  Based on a 10-second interview, they choose that day’s participants.  The contestants don’t know they have been chosen until their names are called.  I won $3,000, a car, and a chandelier.  It was quite a day.

I have lived in eight states, so far.  I was born in West Virginia, moved to Kentucky in second grade, and spent my freshman year of college at Purdue in Indiana.  Then I went to college in Georgia where I graduated.  (Go Dawgs!) Afterwards, I moved to California and from there Hawaii, which was by far my favorite.  Then I lived in Maine (long winters) and now New York (longer winters).  Mr. Spring and I hope/plan to retire to Hawaii when that day comes.

I have lived with Crohn’s disease for 16 years, half of my life.  As a high school junior, I was not well and visited a series of doctors.  Finally, during surgery, the sixth doctor correctly diagnosed my condition.  I vowed that I would not let it control my life, and it hasn’t. I have had the opportunity to participate in Team Challenge and raise money and awareness for the Crohn’s and Colitis Foundation.  I have an adventurous spirit (yes, Mom and I have both jumped out of airplanes, and Mr. Spring and I have run a marathon and half marathons) and have also traveled to several third world countries with my parents to help those people less fortunate. 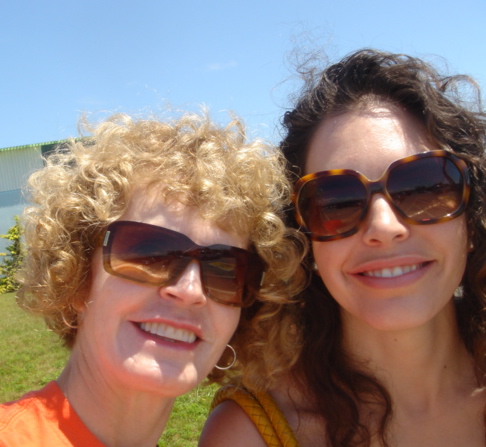 I rode my bicycle from the foot of the Eiffel Tower to Dakar, Senegal, which is in west Africa.  The ride took 10 weeks, and Mom joined me in southern Spain to ride for the last seven weeks.  It was a grueling trip through France, Spain, Morocco, West Sahara, Mauritania, and then Senegal.  We spent several weeks cycling in the Sahara desert.  There were 23 cyclists, and we were the only American women.  The majority of the riders were from the Netherlands who were wonderful to us.  We slept in tents, with an occasional dirty hotel coming to our rescue, and we ate what the locals ate, including camel.  We observed first-hand the repressed conditions of women living in those African countries and are so thankful that we live where we do. 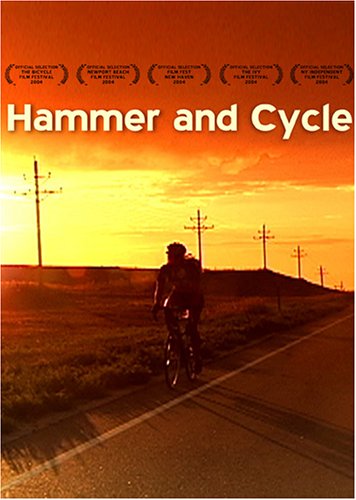 I am listed in the IMDB (International Movie Data Base).  I have bicycled across the country three times for the Yale University Habitat Bicycle Challenge to help them raise money for the local Habitat affiliate.  I was one of four featured cyclists in a documentary called “Hammer and Cycle”, which was made during and about my third cross-country trip.  It is available on Amazon if anyone out there is interested.

We hope we didn’t overshare and get to chatty, but since you have made it this far, take time to enter our Birthday Week give-away.

Price is Right and USA photos from Google.  Hammer and Cycle from Amazon.

Movie on the Lawn Party-Take 2