We here in Lexington are lucky to have a nationally renown landscape architect as a resident.  Jon Carloftis has been featured in every major magazine in the country and has shared his expertise on many national television shows including Good Morning America and Martha Stewart.  In fact, he was once featured in Martha’s magazine.  A popular post we featured last December was the Christmas tour of the Old Kentucky Governor’s Mansion that Jon decorated for a holiday fund-raising tour (here and here). 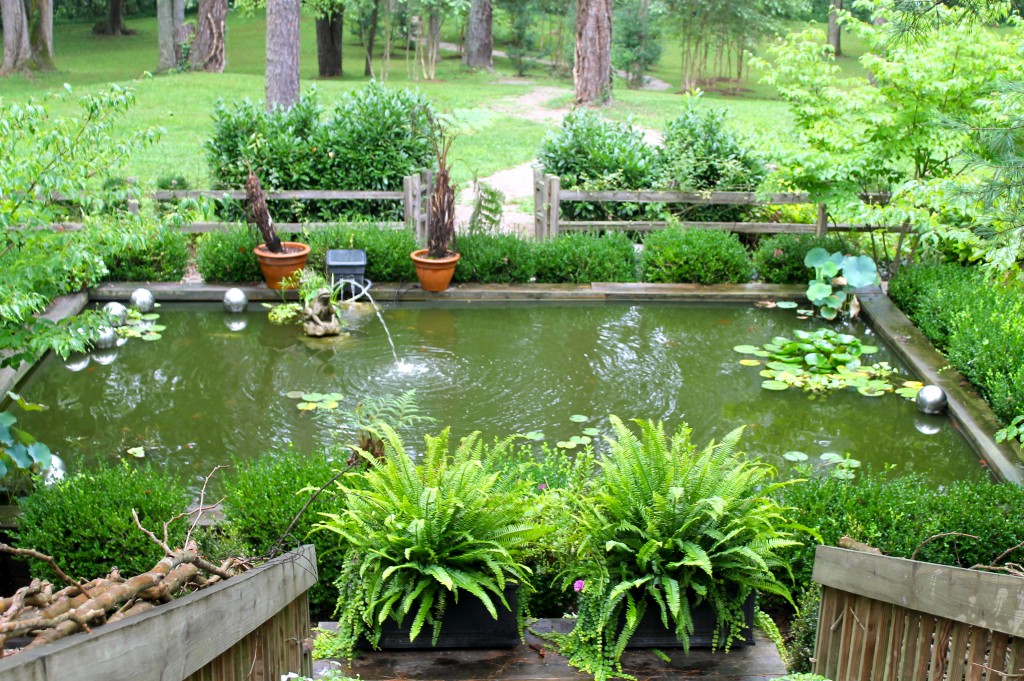 Jon and his mother own a shop about an hour’s drive from here in the town where he grew up.  The shop, Rockcastle River Trading Company is on the banks of the Rockcastle River and sits on the property his childhood home is also on. 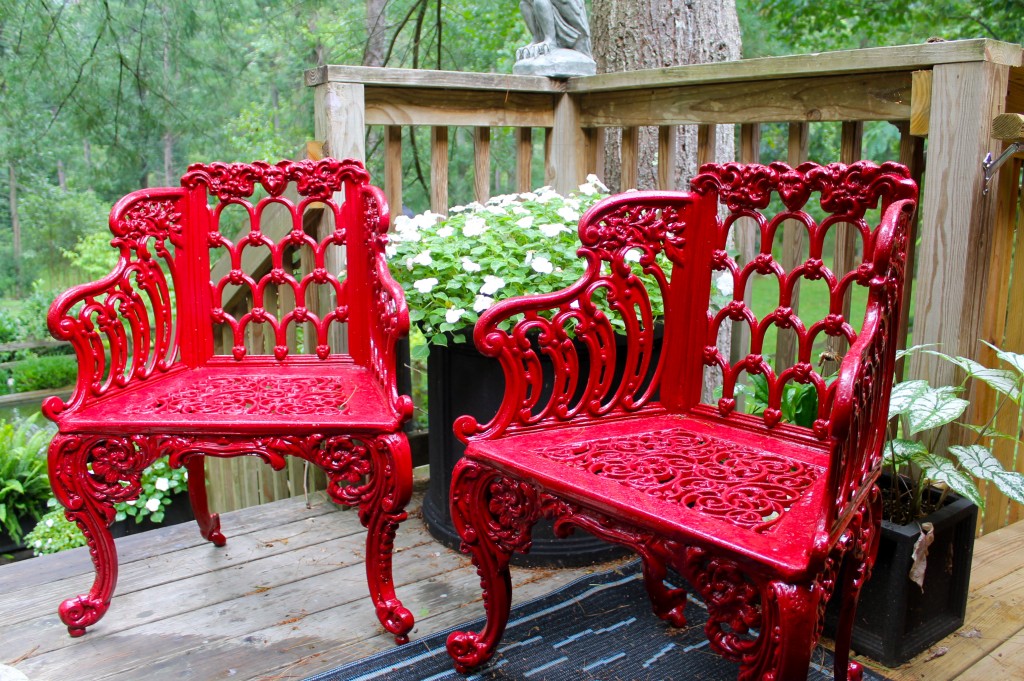 Today I wanted to show you the area around the exterior of the shop.  It is a perfect example of Jon’s landscaping style.  He likes an ungroomed and overgrown approach with a touch of whimsy.  For instance, how do you like these red wrought iron chairs? 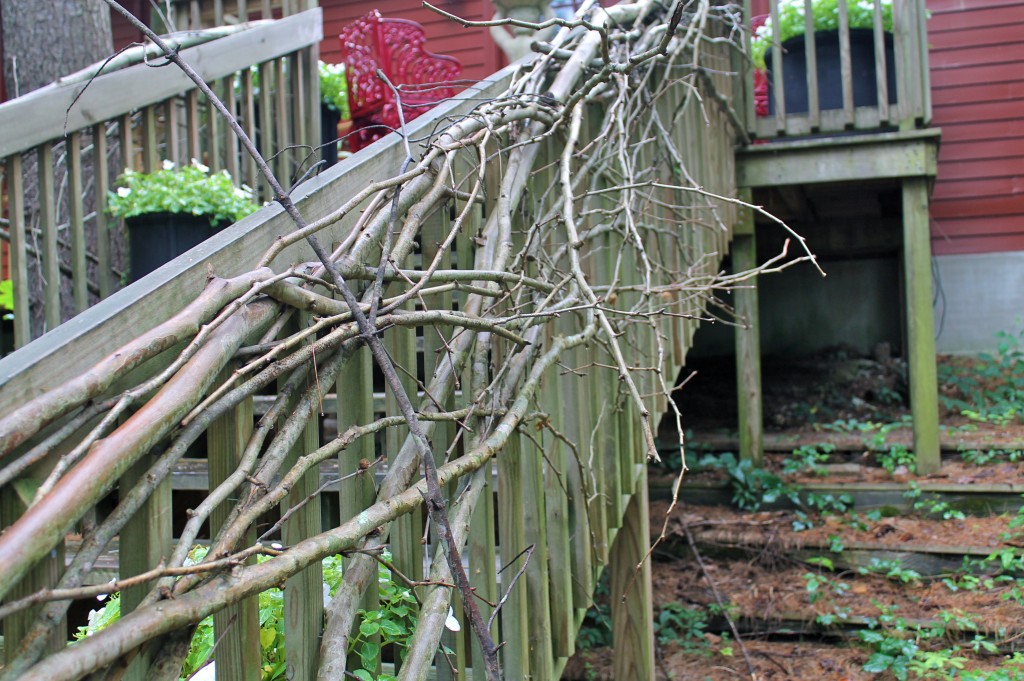 These stairs lead from the back of the shop down to the fish pond that I showed you above.  I love the way he took typical deck stairs and enhanced them by attaching willow twigs to them. 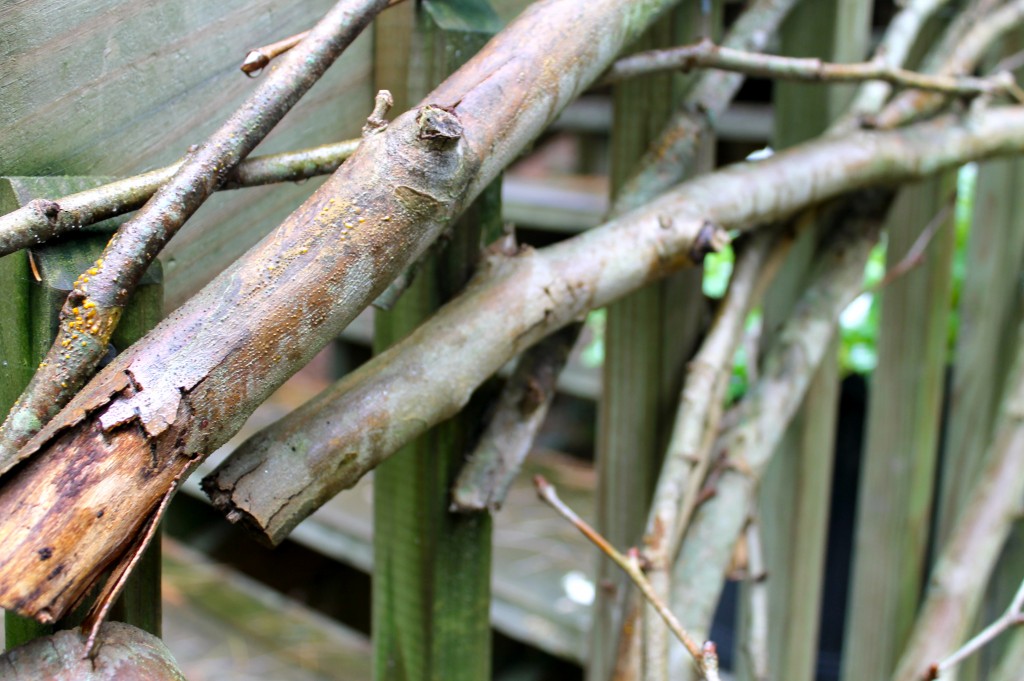 This added touch is something anyone could do to get a rustic look. 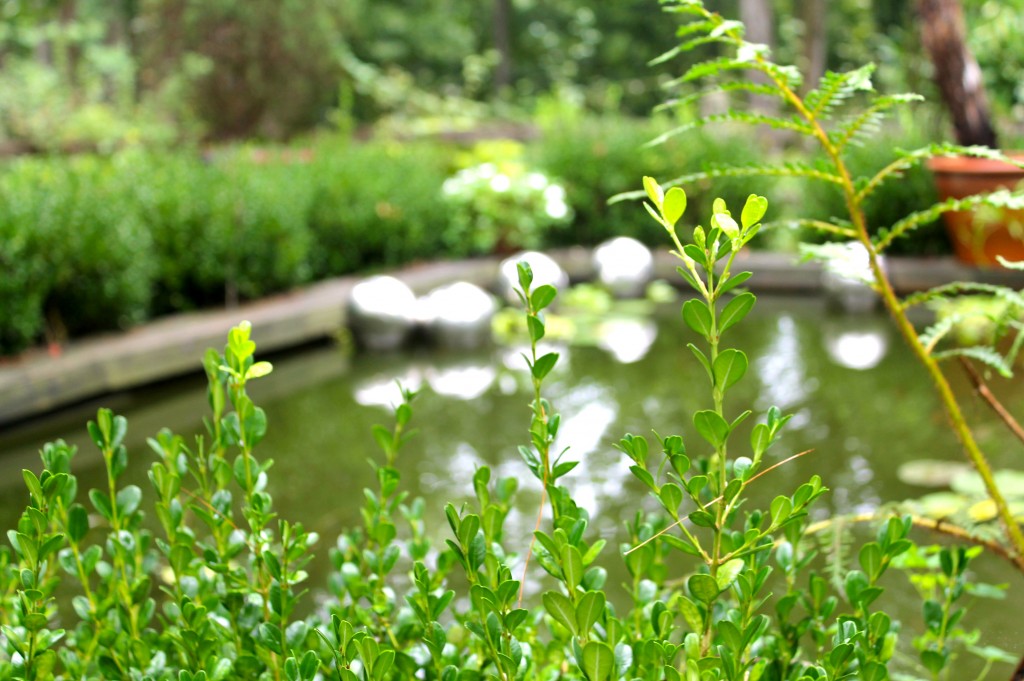 Do you know what those sparkly things are in the water? 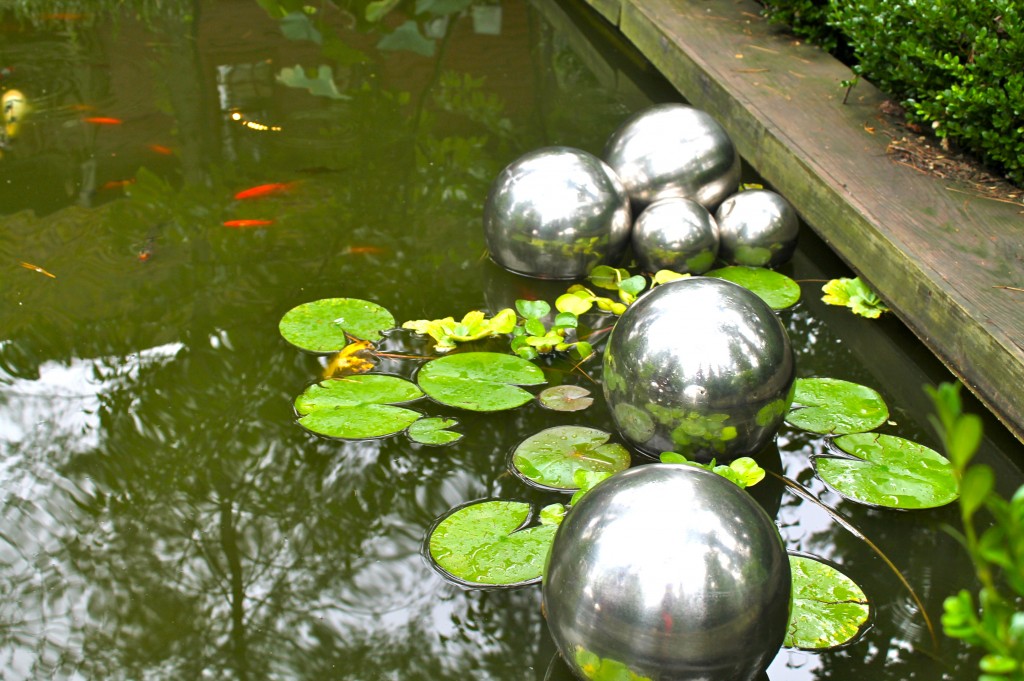 They are silver orbs, and they are wonderful.  I L.O.V.E. them.  They’re like jewelry for the pond. 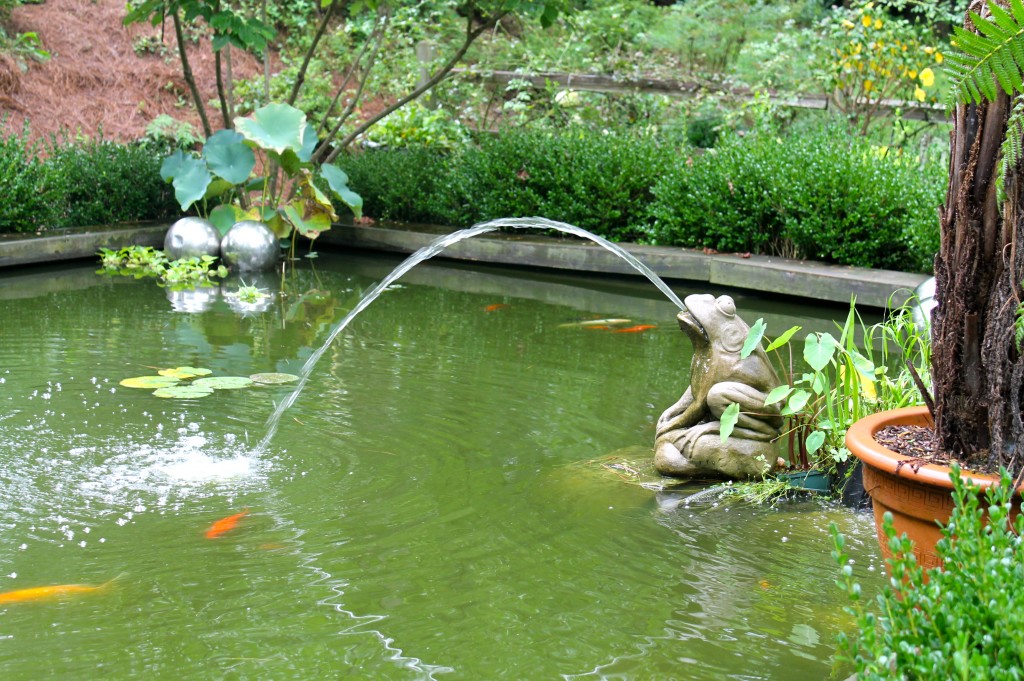 I did say he likes whimsy. 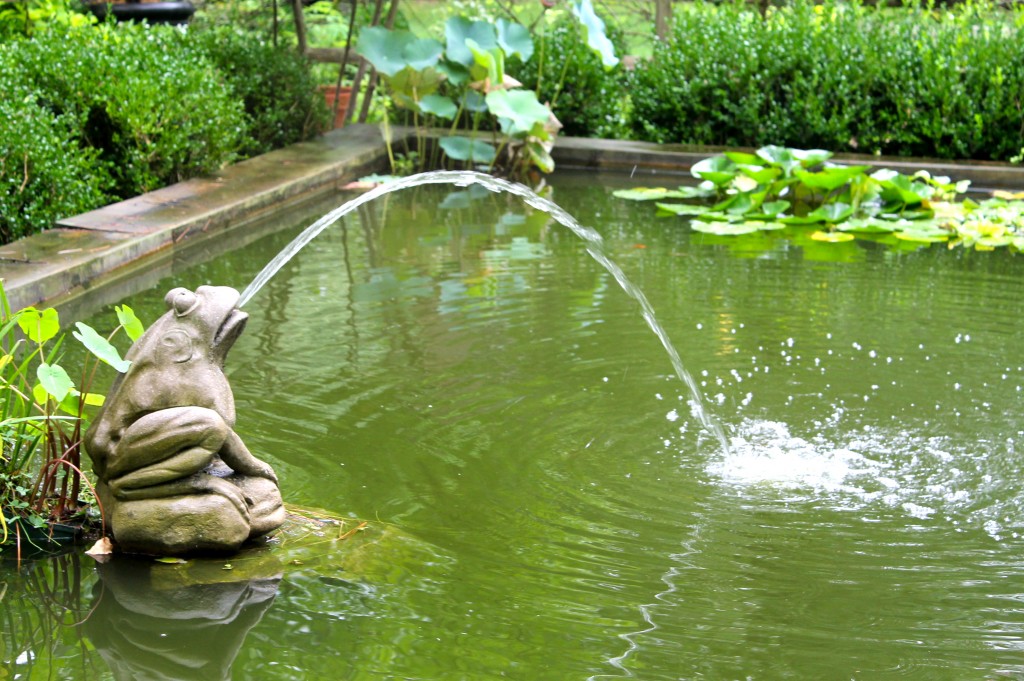 This big guy adds another touch of it. 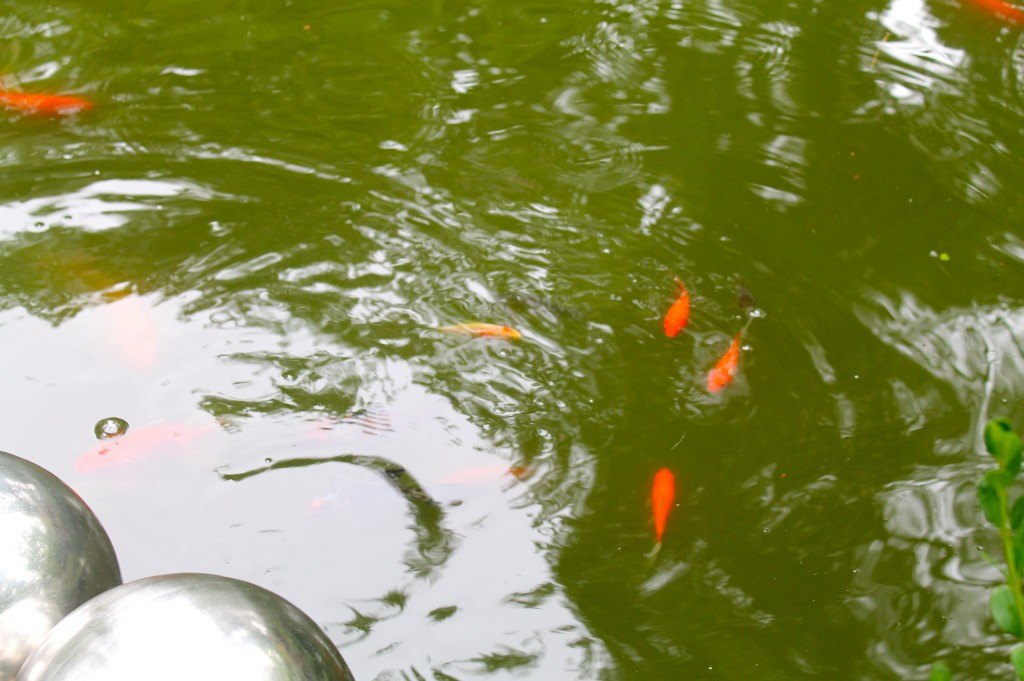 The fish gathered around when they saw me.  I think they thought it was meal time.  I was wishin’ I had my fishing pole…….Then it could have been my meal time…….. 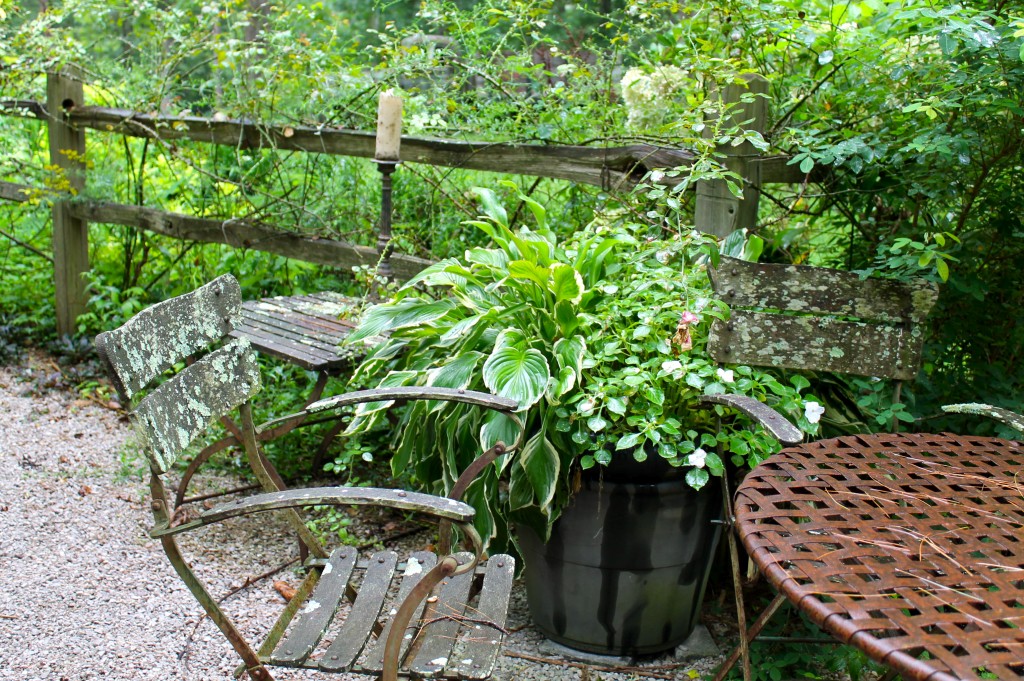 The area around the pond is full of things to look at. 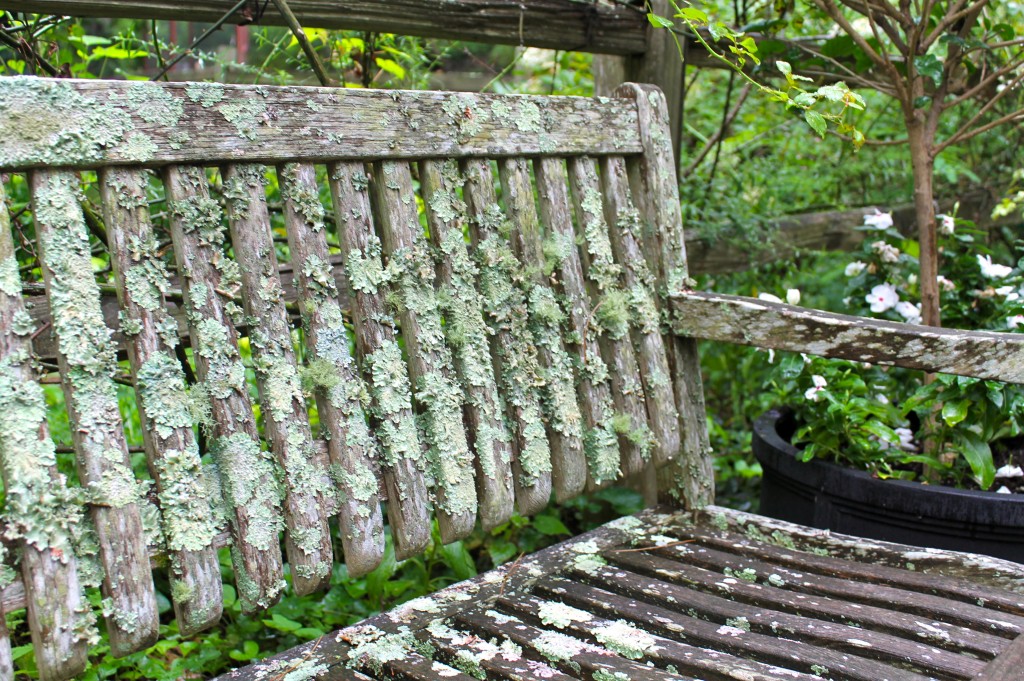 Jon likes the aged weathered look, and the wooded area that surrounds the shop creates the perfect environment for moss to grow. 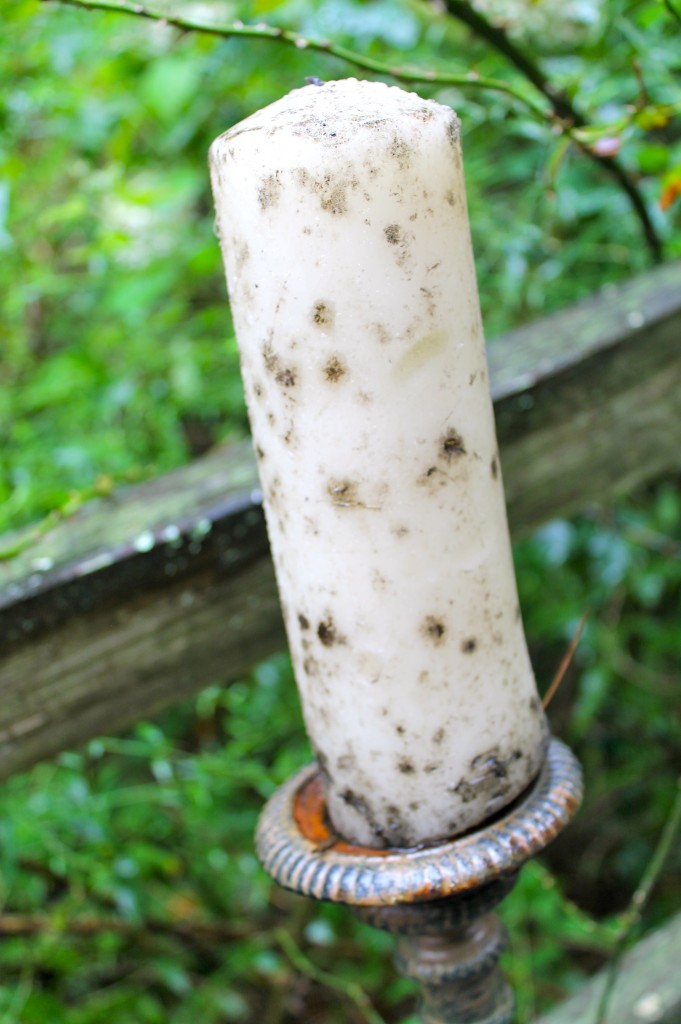 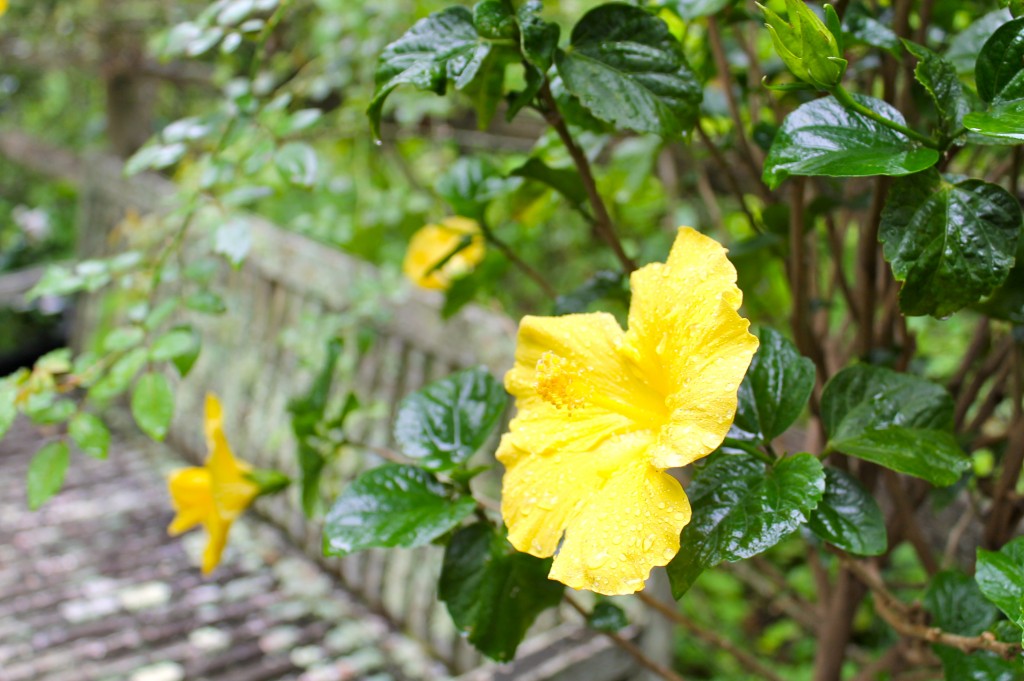 This yellow flower was the only pastel color around. 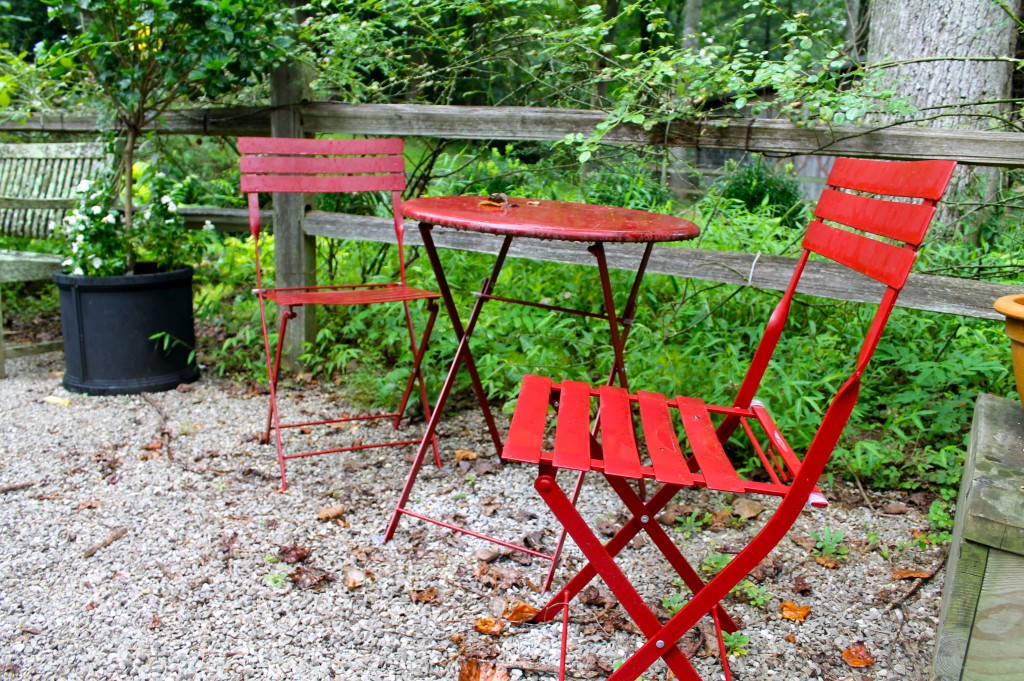 Red is the main color in these parts. 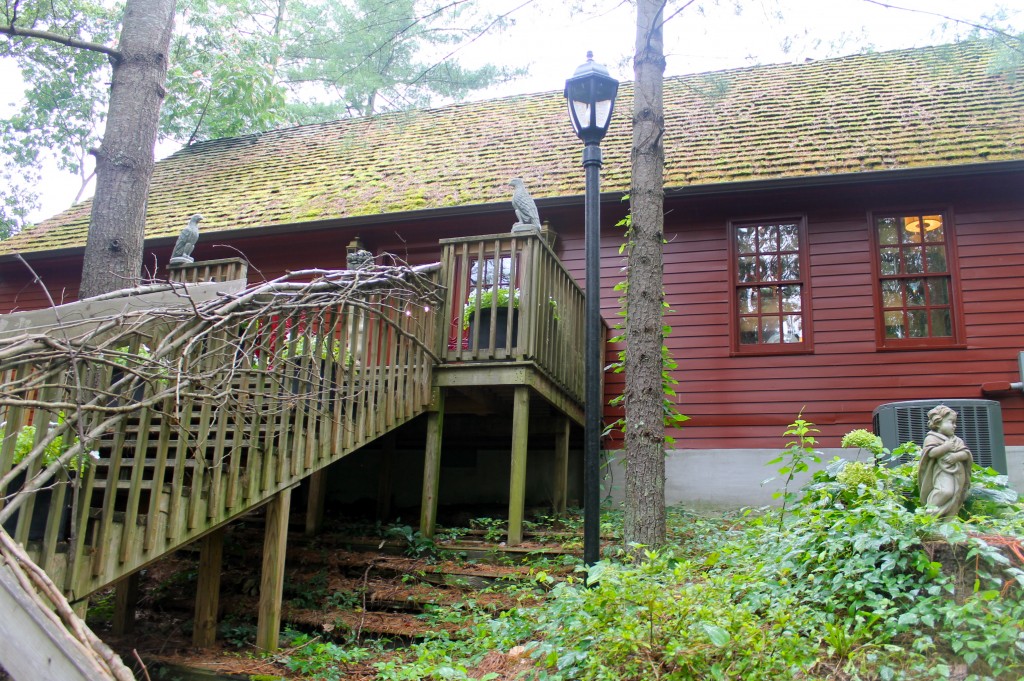 The shop, potting shed, house, carriage house, and guest house are all red. 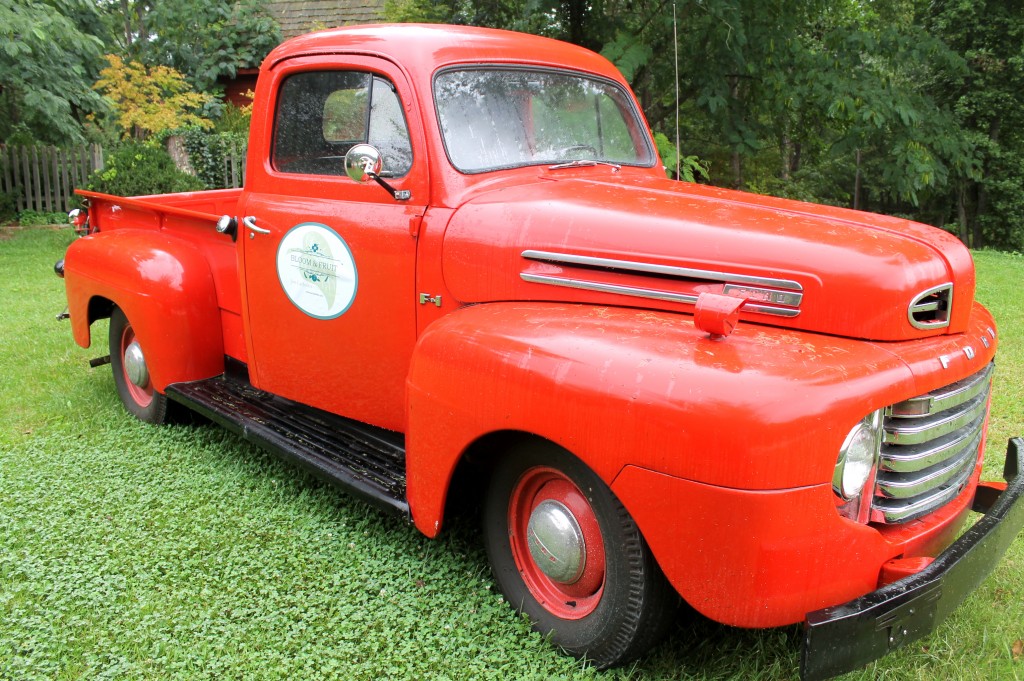 Even the vintage pick-up that advertises his organic gardening additives is bright red. 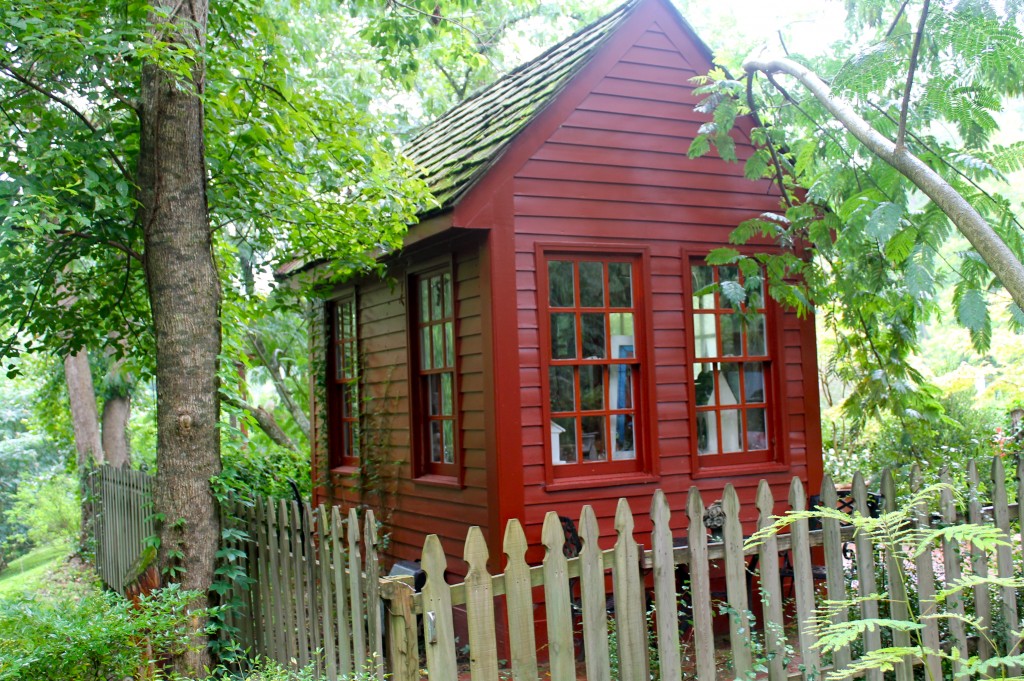 This is the potting shed.  Isn’t it perfection? 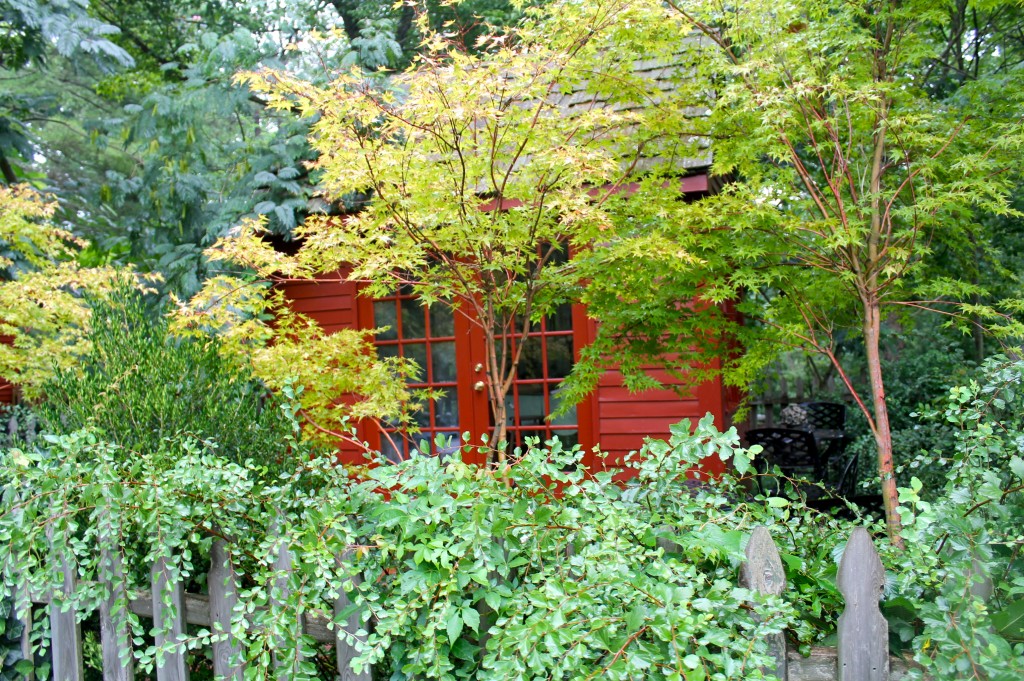 This potting shed was featured at a garden show in Atlanta, I believe, a few years ago.  After the show, it was dismantled and rebuilt on his homeplace. 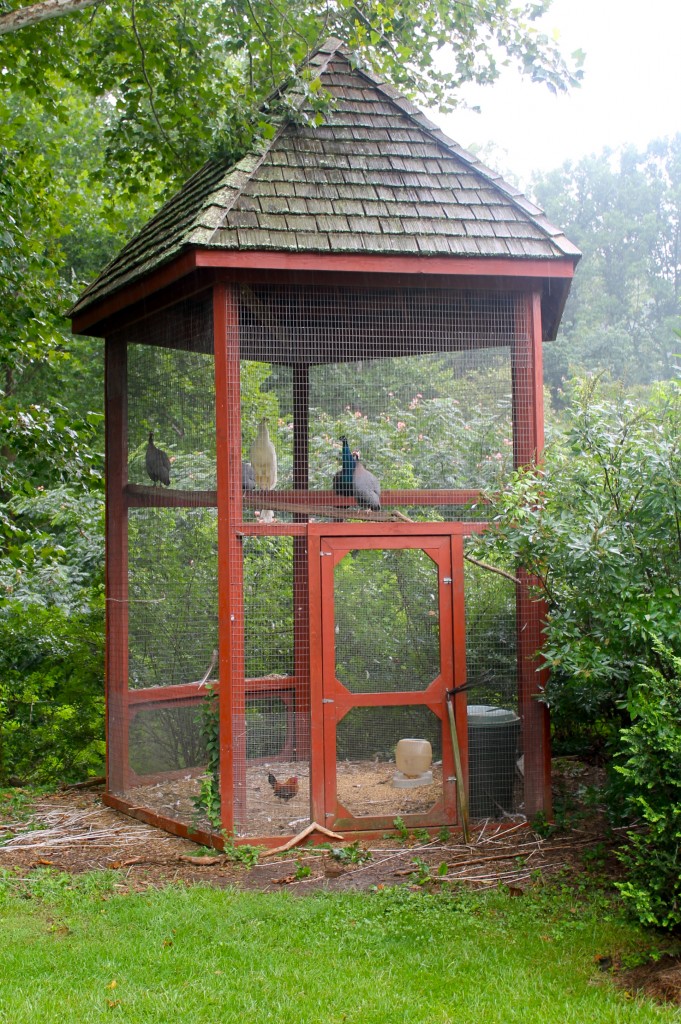 I forgot to mention that the aviary is red. 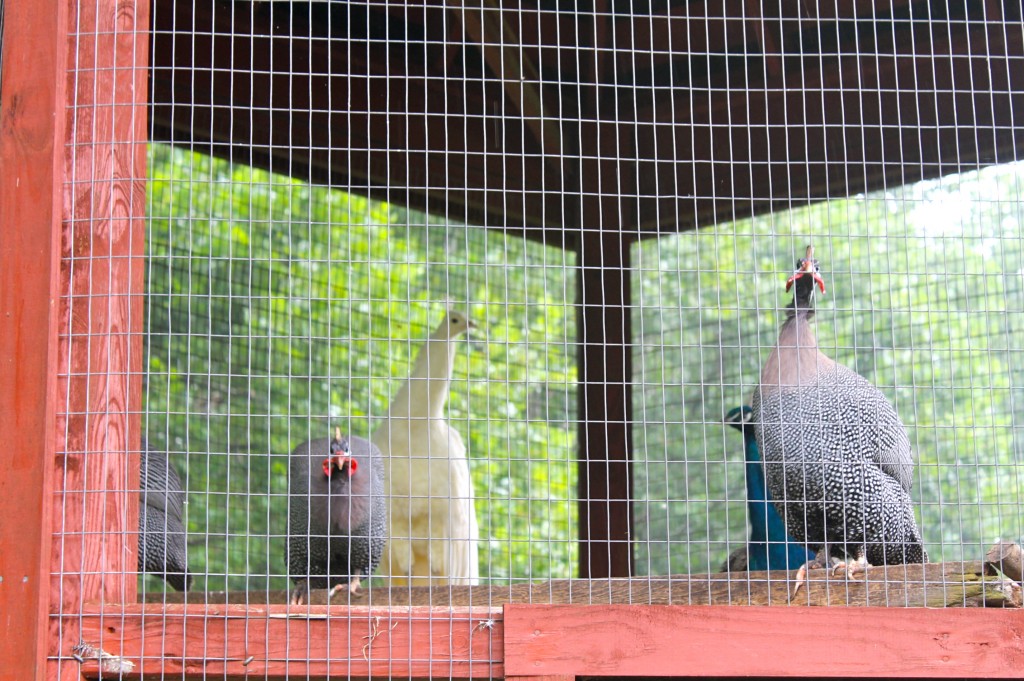 It houses several birds including peacocks and ……. 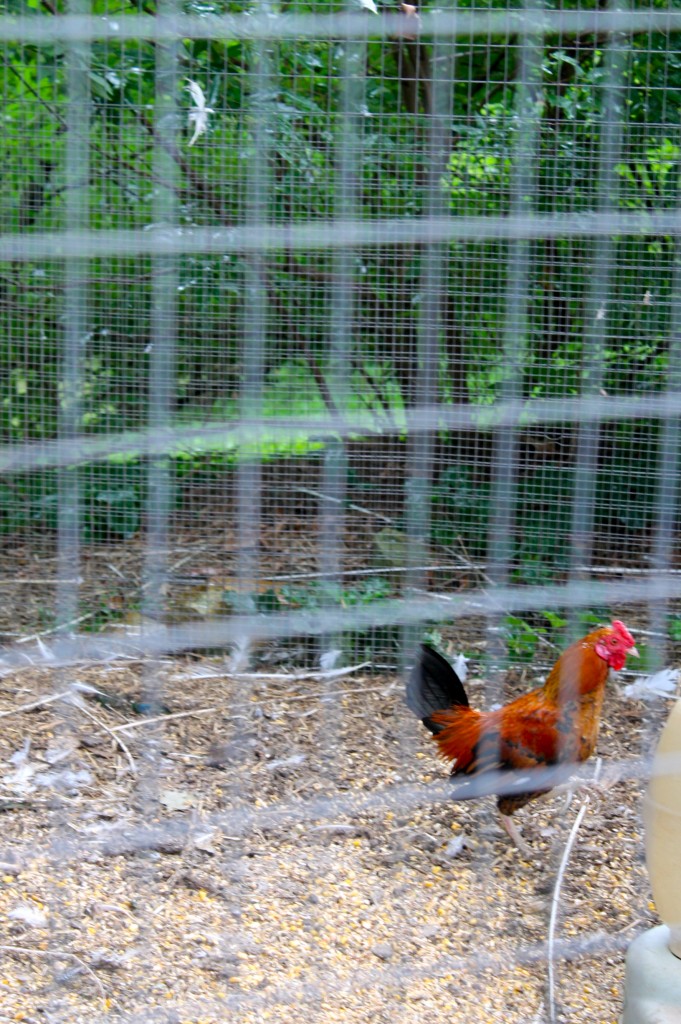 ……and a lone rooster.  What’s that all about?  Maybe their alarm clock is broken. 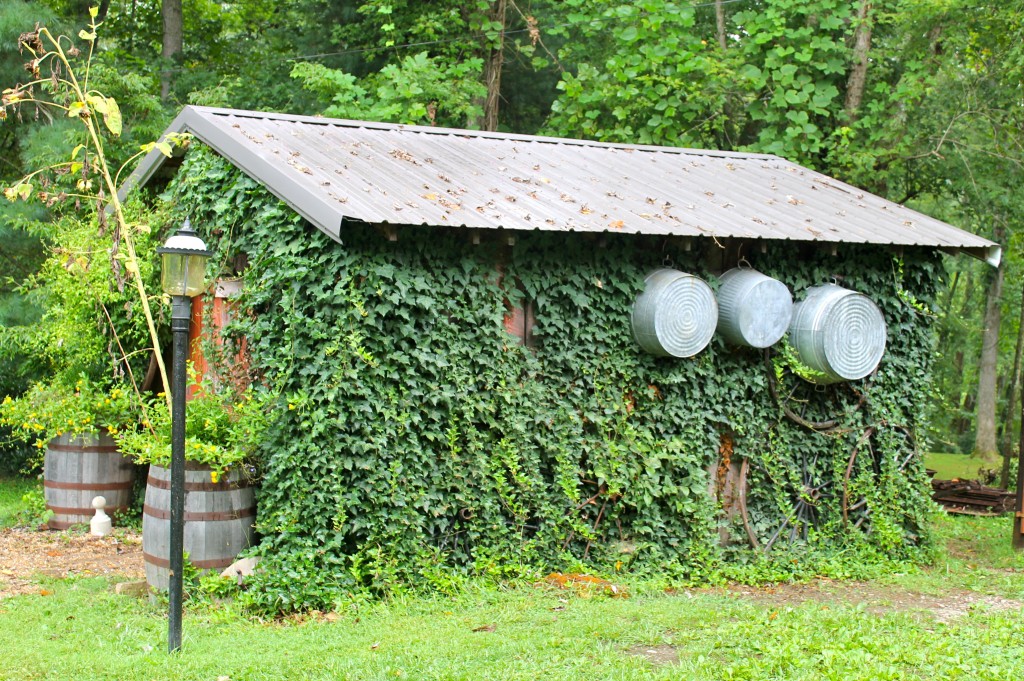 Okay, okay…That’s enough eye candy for one day.  Come back tomorrow, and we will start our tour at the tool shed that was used as a bar at a party I attended here.  We will mosey through the carriage house and across the foot bridge to the gardens surrounding the main house and guest house.

More of the Garden Tour