When Jordan and her new husband bought their house, they weren’t in love with the living room fireplace.  It is on an angle in the corner, which they like.  They will position their seating area at an angle, also, to take advantage of the room’s main focal point.  The fireplace is brick with a nice big white mantel.  Above that is a large mirror trimmed in molding that is about four inches wide.  They plan to lean art against the mirror and use it as  a backdrop.  Below is a before picture of the fireplace.  Excuse the photography.  In the midst of unpacking, they couldn’t find a camera and had to use the phone camera. 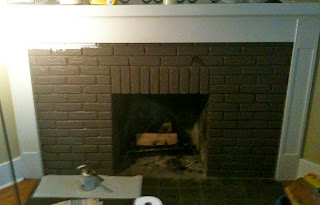 What the couple wasn’t crazy about was the color.  The previous owner had painted the brick a chocolate brown.  It was the exact color of a Hershey chocolate bar minus the almonds.  The two are young and energetic, and the brown just didn’t fit them.  It wasn’t ummmmm sexy enough.  (That is my word – not theirs).  The fireplace needed to be fresh looking, and the drabness of the brick was pulling the entire room down.  One of my projects when I visited them a few weeks agol was to select a color from the color cards we picked up at Home Depot and then to paint the brick white.  They wanted the white to be in the same hue as the mantel and trim, which is a creamy white – like vanilla.   Being new at this, they were surprised by all of the shades of white that are available.  We finally settled on Snow Fall by Behr in a flat latex.  Even though all of the below swatches are considered whites, you can see the definite color variations. 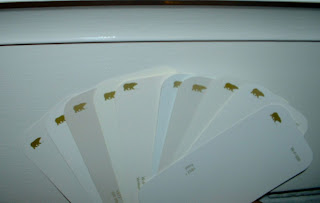 After removing the wood logs and screen, I coated the bricks with Kilz, which is a primer.  It is available in both oil and latex base, and because we wanted an easy clean-up, we used the latex base.  The primer dried several hours while we worked on some other projects, and then I painted the first coat.  It looked even, and I thought the job was easier than I had expected.  But the next morning when the sun was shining in, we noticed that some brown shades were still showing.  So, I quickly gave it a second coat of paint.  A few hours later, we could tell that the job was complete.

The fresh, white bricks changed the personality of the entire room.  The walls are a great taupy green, and the fireplace pops now.  It’s perfect as a backdrop for a cup of hot chocolate. 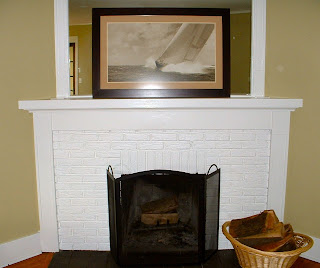 I have to add this disclaimer letting you know that, unfortunately, Home Depot and Kilz are not paying me to use their products.